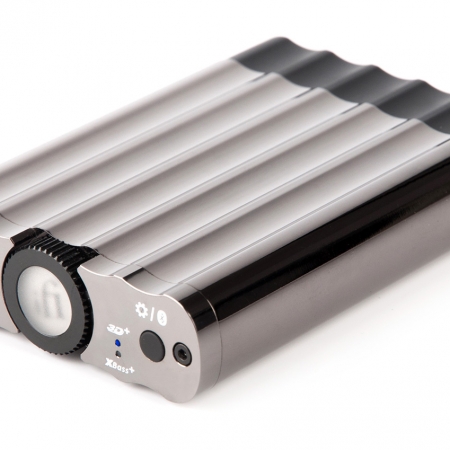 I am an Apple Fanboy. I have been for a long time and as such I operate primarily in their digital world for my stored music, iTunes, and some of my streaming, Apple Music. I do venture out with Tidal for HiRez streaming and I am beginning to play with Qobuz. All of these I can enjoy via the iPhone and its apps. Over the years I have enjoyed a variety of iPhones but in the last couple of years, if you wanted the latest tech, it cost you the 3.5mm headphone jack. Admittedly, running an expensive pair of custom in-ear monitors like mine from Noble Audio, Ultimate Ears or Jerry Harvey Audio into an iPhone straight away was not going to be the best sound compared to a hi-end DAP like my Questyle QP2r or Astell & Kern AK120 mkII but it was still a solid experience especially when I was on the go.

A few years ago, ifi came out with the brilliant Micro iDSD. This hi power ultra-flexible portable DAC/Amp brought desktop power to my portable life. About the size of two decks of cards set end to end it was a bit large for in the pocket use but in a hotel or at Starbucks it was amazing. It brought back everything the iPhone could not deliver. It even offered a full sized single ended headphone jack. As I was migrating through the iPhone 7 and 8 it also offered respite from the dreaded $10 lightning to 3.5mm headphone jack nightmare. If only it was a bit more portable….

Enter the new xDSD portable amp and DAC. Less than half the size and weight of its big brother the xDSD also brought full aptX Bluetooth to the table. You want your reference in-ears to shine, plug them in. Want to go wireless from your iPhone? Change to Bluetooth mode and leave the iPhone in your pocket. All in a device weighing in at a svelte 127 grams. Sweet!

Say you are strapped for space in your home and don’t want a huge DAC on your desktop. The xDSD has two output modes to optimize its use for both speakers via your home stereo or headphones. It can do double duty for the audio enthusiast. The DAC used is the Burr-Brown True Native chipset. One of my long-time favorites for restoring the sound of analogue to digital files. Ifi has loaded the device with their xBass+ for extended bass and 3D+ to enhance the soundstage if desired. Lastly, the xDSD is fully MQA compliant. Should you want to mount the xDSD to your iPhone a selection of Velcro strips are provided for that purpose. As for amp power, the xDSD will deliver 500mw’s into 16 Ohms which will drive all in ears and most full-sized headphones very nicely for up to seven hours of battery life. The amp is a dual mono design and the 3.5mm headphone jack operates as both single-ended output and with a (3.5mm) TRRS balanced connector as a balanced out. My TRRS adapter is a 2.5mm so I used single ended exclusively for this review.

I began the listening with two-channel stereo. I used a USB-A Female to USB-A male cable to connect the xDSD to my MacMini and a 3.5mm male connector into the multi-function port on the other end of the xDSD. I would hang on to the instruction sheet provided; the xDSD packs a lot of functionality into a small device that requires most ports and knobs to have multiple uses. It takes some practice to make the adjustments to move from one setup to another. In this case, using the 3.5mm jack as an output switches the xDSD into a fixed volume mode allowing your regular pre-amp volume control to be in charge of your system’s volume. The xDSD provides the DAC function via its Burr-Brown True Native chipset. 3.5mm to RCA cable in hand I hooked the xDSD up to my PS Audio BHK Pre-Amp and fired up Roon.

First up was Sting’s “Let Your Soul Be Your Pilot” from Mercury Falling (A&M Records 1996). This is a breezy jazz-influenced song featuring Sting fronting a choir with brass and tenor sax fleshing out the guitars, bass, and drums. They throw in the Hammond B3 organ too. The presentation via the xDSD was outstanding. Full bodied sound flowed from the Vandersteen Quatro CT’s. Considering the 1/12th the price cost of the xDSD vs the PS Audio Directstream DSD DAC the quality of the sound was remarkable. The soundstage was precise and as wide as a stage full of singers and musicians should be. What a nice start to the listening process.

Moving on to headphones I switched to the Ultimate Ears UE11 custom in-ear monitors sourcing via Tidal from its iPhone app. The UE11’s are a regular go-to for me and they have a terrific low bass quality. Putting on Adele’s “Hello” from her 25 album (XL 2015) the sound flowed once again full and clear. The difference between the iPhone alone and with the xDSD was striking. The iPhone has a lean sound signature that leaves a lot out of the delivery. With the xDSD I was receiving the type of quality I expect from a four-figure DAP. The xDSD also brought the game to the JH Audio Layla’s when Tom Petty’s “Free Fallin’” (MCA 1989) came on via Tidal using the Bluetooth connection. Clearly, the ifi implementation of Bluetooth aptX was a complete success.

The powerful dual mono amplification within the xDSD had no trouble driving both the V-Moda Crossfade II Codex and the Audeze LCD-X full sized headphones. I love the Crossfade II Codex’s as a great grab and run headphone. The portability of the xDSD was really appreciated as I spent some high-quality listening time in the local coffee shop. The final highlight for me with the xDSD was an evening listening session with the Audeze LCD-X’s using the iPhone wired via its USB input and connecting the LCD-X’s to the xDSD with some Toxic Cable Silver Widow 25 cables. Any time I can be in the vicinity of sound quality that nears my reference rig it is a good thing. For a $399 device to get me there was special. I make sure I charge the xDSD every night. For me, this is a primary daily use device. Once again, the team at ifi Audio has delivered a category-leading unit. Bravo!