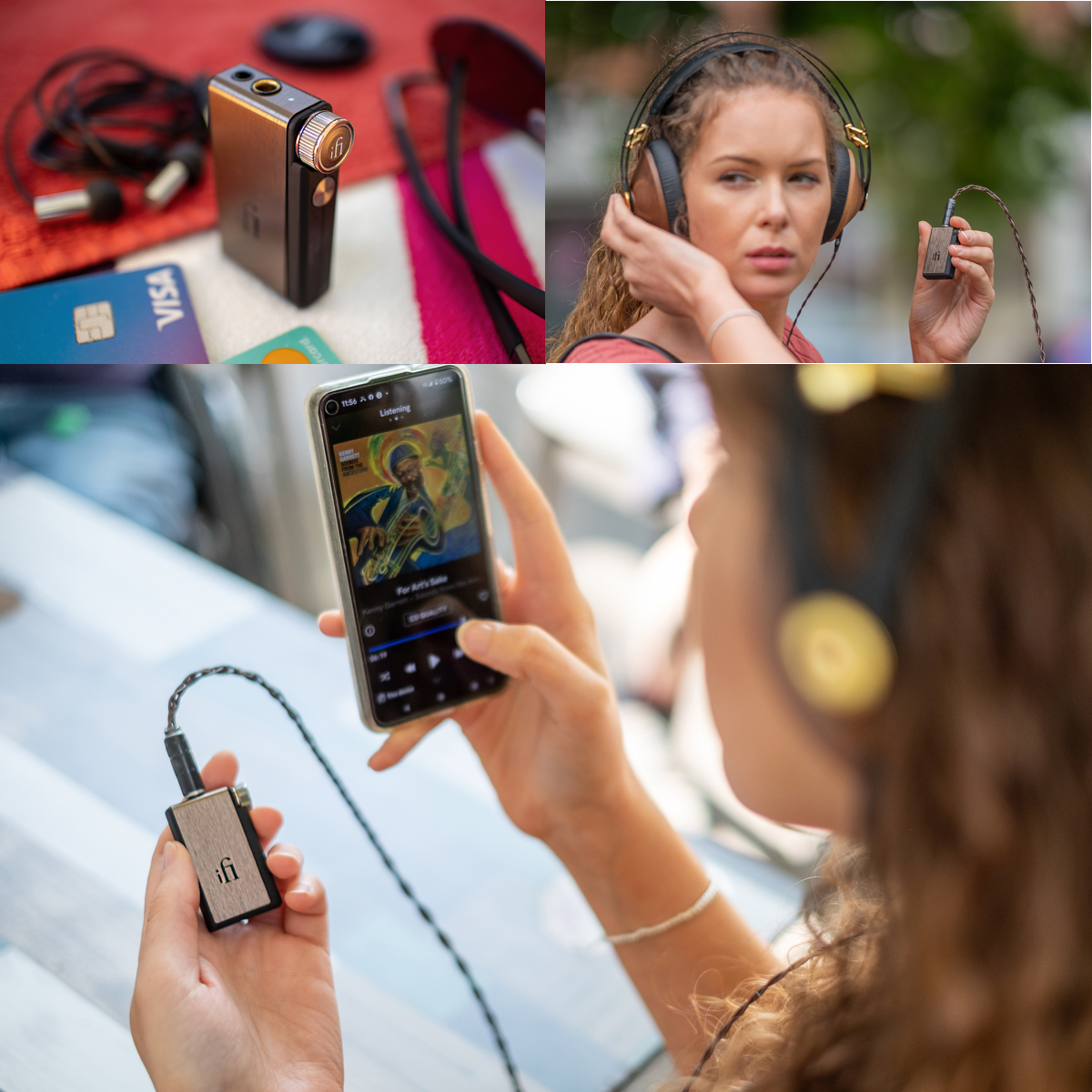 Southport, England – iFi’s acclaimed DAC/headphone amps have formed a cornerstone of the company’s product range since its formation in 2012, delivering brilliant sound from smartphones, tablets, PCs, Macs and more. Some of these devices include rechargeable batteries and are sized to make them conveniently portable. None, however, are as eminently pocketable as the GO blu – iFi’s most diminutive DAC/headphone amp yet. But, while it may be delightfully small (55x34x13mm, similar in size to a matchbox or Zippo lighter) and weigh just 26g (less than an AA battery), this pocket rocket delivers a performance that is remarkably mighty.

To maximise mobile convenience, the GO blu pairs wirelessly with the user’s source device via Bluetooth. No more messing around with restrictive USB cables and dongles, worrying about whether you’ve got the right OTG cable for your Android device, or Lightning to USB Camera Adapter for your Apple iOS device. Just pair… and GO!

But while the GO blu majors on convenience, there’s not a hint of compromise when it comes to sound quality. Most pocket-size Bluetooth DAC/headphone amps incorporate all-in-one ‘system on a chip’ solutions to deliver input processing, digital-to-analogue signal conversion and amplification. These are simple to implement, compact and cost-effective, but they cannot compare with expertly designed, individually optimised circuit stages when it comes to sound quality. Uniquely for a device of this type and size, the GO blu’s clever design packs in separate Bluetooth, DAC and amp stages, each engineered in distinct blocks to deliver the ideal combination of cutting-edge specification and superb sound.

The way iFi implements Bluetooth is anything but ‘run of the mill’ and despite its diminutive size the GO blu is no exception. Making full use of Qualcomm’s latest four-core QCC5100 Bluetooth processing chip, every current high-definition Bluetooth audio format is supported, including aptX Adaptive and aptX HD, LDAC and HWA/LHDC. Other codecs covered include regular aptX and aptX Low Latency, AAC and SBC (the ‘plain vanilla’ Bluetooth codec).

This means that every possible source device is handled at the highest audio resolution its Bluetooth specification allows – no other pocket-size DAC/amp delivers such comprehensive codec support, or such high-quality sound over Bluetooth. The GO blu is Bluetooth v5.1-compliant, ensuring the best possible range, stability and performance, and its ‘Bluetooth engine’ can be updated over the air.

The Bluetooth stage feeds the DAC stage, with a Cirrus Logic 32-bit DAC chip at its heart. This is coupled with a customised digital filter to minimise pre-echoes and ringing artefacts, and a precision clock system to ensure ultra-low jitter, thus reducing errors and distortion in the digital audio signal.

The analogue circuitry in many of iFi’s recently launched audio devices has focused on balanced design, traditionally a high-end concept; remarkably, the GO blu is no exception, despite its diminutive size. The amp circuitry benefits from symmetrical twin-mono signal paths and utilises iFi’s Direct Drive design concept – direct-coupled to ensure a clean signal path without distortion-inducing output coupling capacitors.

In true iFi fashion, the GO blu incorporates circuit components of a quality not commonly found in a device of this kind, including TDK C0G multilayer ceramic capacitors and inductors from Taiyo Yuden and Murata. The net result is ultra-low distortion across the entire signal bandwidth, delivering sound that is purer, clearer and more naturally expressive.

The amp stage delivers up to 5.6V – considerably more power than other similarly sized devices – handling even relatively tough headphone loads with ease. To ensure signal strength suits the sensitivity of the connected headphones or earphones, auto-gain adjusts output up or down by 6dB.

Further sonic tailoring is provided by two user-selectable features familiar to users of other portable headphone amps from iFi. The first is XBass, a sophisticated form of ‘bass boost’ that enhances low frequencies without muddying the midrange, particularly useful with earphones and open-back headphones that may lack deep bass. The second is XSpace, a setting designed to compensate for the ‘in-head localisation’ effect that can occur when using headphones to listen to music that was mixed using a pair of speakers, effectively widening the headphone soundstage to deliver a more spacious and speaker-like experience. Both these optional settings operate entirely in the analogue domain rather than messing with the digital signal via DSP (Digital Signal Processing) and may be switched in or out of the signal path.

A pair of headphone outputs are provided – a 3.5mm socket for headphones with a single-ended cable/connector, and a gold-plated 4.4mm Pentaconn output enabling headphones equipped with balanced connectivity to take full advantage of the GO blu’s balanced amp design. In addition, the 3.5mm output benefits from iFi’s S-Balanced circuitry, cutting crosstalk and related distortion in half when used with regular, single-ended headphone connections.

Left 3.5mm and 4.4mm headphone outputs viewed from the top, along with the ChronoDial multifunction control

Why not just use Bluetooth headphones or earbuds instead?

A fair question. After all, there’s nothing more convenient than popping a couple of wireless earbuds in your ears and pairing them directly with your source device. It all comes down to sound quality – wireless headphones or earphones of any kind integrate Bluetooth processing, D/A conversion and amplification into a tiny space and there is a ceiling to the sound quality that can be achieved. Choose a good pair of corded headphones or in-ear monitors, and team them with a separate, high-quality portable DAC/headphone amp, and the sound quality you will achieve will beat any pair of wireless headphone or earphones hands down.

With the GO blu, you get the convenience of a powerful, pocketable DAC/headphone amp with Bluetooth connectivity, married to exceptional sound quality to sate the sonic appetite of even the most demanding music lover. A perfect combination!

With its lightweight, soft-touch polymer enclosure (great for Bluetooth reception, unlike signal-blocking metal), copper-coloured trim and ChronoDial watch crown-style control, the GO blu is a pleasure to use wherever you go. iFi has even incorporated a high-quality chip-based (CMOS-MEMS) microphone, enabling hands-free calls, voice chat for gaming and access to voice assistants such as Apple Siri and Google Assistant.

Further flexibility is provided by the USB-C charging port, which doubles as an audio input enabling USB connection from source devices that don’t offer Bluetooth connectivity. Hi-res PCM audio data up to
24-bit/96kHz is supported when the GO blu is connected in this way. Small, convenient, uniquely specified and great sounding, the iFi GO blu is the ultimate go-anywhere upgrade to elevate your headphone experience – available from selected retailers from 10 September at an RRP of £199, (€199, US$199).

Left Similar in size to a matchbox or Zippo lighter, the iFi GO blu is a real pocket rocket