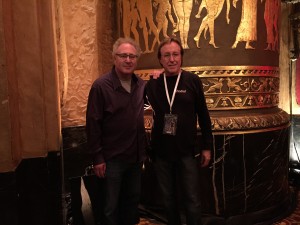 1-You started at of course like many of us who got brought in other directions. What got you started being the programmer and main man to so many of the top artists?

I started off playing guitar and keys in cover bands when I was still in high school, and made pretty good money at it for years. My first computer was a Commodore 64 running Dr T’s KCS with a Sequential Circuits interface. I realized pretty quickly there would be a market for figuring out how to incorporate computers into live shows so I moved to LA around 1985, and played in some cover bands by night but by day did whatever I could for people that were doing lots of session work.

Bo Tomlyn and Steve Leonard (Key Clique and Keyboard Magazine writers took me under their wing and got me my first gig with Earth Wind and Fire in 1987 as a keyboard tech that ran Roland MC-500’s for basic playback, and I played keys behind the curtain as needed. Word of mouth got me my next big gig with Madonna in 1990 where I used an Atari 1040ST with Dr T’s and a shitload of Emax 2’s for her tour. It was an accident waiting to happen but I got through it! Things just took off from there.

I wanted to play keys, and got the chance to with EW&F, Paula Abdul and Madonna but most of my work now is behind the scenes on big tours like Mariah Carey, Roger Waters “The Wall”, and I was blessed to work with Michael Jackson and Whitney Houston and many others over the years. At this point I’m just happy to be doing anything at this level!

2-What do you use to program the shows-Are all artists different?
I use Digital Performer and MOTU hardware for all of my tours. I have Pro Tools as most of the time I’ll get Pro Tools files from the records that I have to transfer to DP.
The only big differences between tours is whether I go on the tour myself or program it and send someone else out. I tend to simplify things if I’m not going out and do the needed edits from home.

If I’m on the road I carry all the multis from their records and all the live show versions so the artist can have flexibility. Also some tours like “The Wall” need 16-24 outputs from me for the surround stuff, while most pop tours can get by with 8 outs. Also, some tours expect me to send all departments time code for automation and video playback.

3-Is there any situation that was particularly  difficult that needed you to think another way?
Madonna 1990 was a laugh a minute.. She expected me to pull off things that would be easy now but back then I was using Syquest 44 MB cartridges  and floppy disks. I was basically making fire with 2 rocks every night with no redundant system running like I have now. I basically had to invent a way to automate the loading and routing of the audio for 8 Emax 2 samplers.

While 4 were playing, 4 were loading, but I pulled it off sending program changes to automate the loading of samples and using 360 Systems programmable audio patchers to change the audio routing, also using MIDI program changes. One missed program change and the shit would’ve hit the fan in front of 10,000 people! Plus I was playing keys under the stage too! That tour aged me about 10 friggin years!

4-is there a particular skill that a musician needs to be able to perform to prerecords or the programming that you do?
You have to be a decent musician to be a good playback guy!  It’s very important to listen to their ideas, and be able to translate it to your sound design and editing.

5-How have you seen your job change over the years with relationship to the technology as it keeps on developing?
The thing that scares the hell out of me about playback now is that many artists (no one I’m currently working for) have a dedicated A&B rig for playback and a 3rd computer to automate vocals live during the show. They’re programming AutoTune 8 to automate the scales so the singer can’t hit a “wrong” note, and when tracks are used they incorporate a ducker to bring down the live vocal when the track vocal comes in as well as the other vocal processing tricks. That shit’s just crazy… but I may have to do it at some point so it’s important to stay on top of what people are doing and might be doing in the future.

I have been asked to do teleprompter as well as playback and if anyone comes out with software that can run in the background and follow my edits and chase playback I’ll probably have to do that as well dammit.Plus, lots of bands are using MainStage and VEP live for their keyboard sounds and expect me to magically know how to do that as well… I have to draw the line somewhere, so I tell the keyboard techs they’re on their own for the show but will of course help otherwise.

6-Is there any system out there that works better than the others?
Digital performer is hands down the best for live shows because you can have literally hundreds of different songs in one file. Pro Tools and Ableton just can’t do that. The MOTU hardware is also the best for live shows IMHO because it sounds great and just works! Plus MOTU has amazing customer support and if I ever have an issue they’re all over it, and they listen to my wishes for future features in their software and hardware.

7-Favorite movie?
Aliens, Pulp Fiction… (Sorry, I’ve got nothing…. 🙂 I like movies that take me away from the real world basically.

9-You are an incredibly busy guy-What do you do during off time?
Fly… sleep… 🙂 honestly I spend a lot of time on Groove3 and MacProVideo doing tutorials trying to stay on top of things in the music software, engineering and sound design world and have been asked to do music and sound effects for a few short films. I LOVE doing that and hope to do a lot more in the future!

This is the third album of Gerry Gibbs  successful Thrasher Dream Trio trilogy of CDs featuring Ron Carter and Kenny Barron. That really should be enough of a review right there. This album however he ups the ante by adding trumpet great Roy Hargrove and the great Cassandra Wilson on vocals and it’s live in the Studio. The set starts swinging enough with an uptempo version on Wives and Lovers which immediately shows you they mean business.

The choice of material from there stays at a very high level with such songs as The Summer Knows” and the Theme from a Man and a Woman-Very Inspired. Then Roy and Cassandra come on Board and the results truly are spectacular- Roy really is in form on “On a Clear Day” with a great vibe by the trio supporting him.The three songs Cassandra Wilson is featured on just show her in top form both vocally and emotionally .

The Look of Love features such beautiful support by the trio especially Kenny Barron who constantly comes up with innovative voicing. “Watch What Happens” is just a vocal on another level of this great Michel LeGrande song,But the real highlight is Alfie with Roy on Trumpet. Cassandra totally owns this track and the trio gives her the perfect backdrop for this great song. This is a CD worth owning.Everything is hitting on all cylinders and its a CD you will listen to over and over again

The Butterfield Blues Band-East-West.
I listened to a lot of music growing up in Brooklyn NY. I listened intently to the Beatles and the other artists and bands of the day. I also absorbed jazz by Wes Montgomery,Jimmy Smith,Miles and others the best i could as it was a new language. My whole outlook and seriousness about music changed when I heard this album.The mood,sound,album cover was set in a perfect period of time. The sound of this band was hard,fresh and virtuosic blues. The Blues for the new generation. The guitar playing of Michael Bloomfield could have been the best ever recorded by a blues,rock,guitarist to date. The rest of the band powered by Billy Davenports drums raised every song to a very high standard.

Paul Butterfield’s Vocals and Harmonica playing were in that area of rarified air and the finale East-West was a 13 minute exploration of music that no-one had ever heard before. “The Work Song” is my personal favorite. This is an album that has transcended time and that should be listened to and appreciated by every serious listener who appreciates what it is like to come up with something so new and fresh that it influences a whole generation of musicians and listeners

Do you want  to know why it is very rough for musicians to gain ground these days?  How about starting with there is no fast and quick way to check out album credits anymore. Because of streaming and digital downloads and the slow demise of CDs, credits and credibility are  becoming a  thing of the past.How does the public get to know about that great guitar solo or excellent production or arrangement?I

f they don’t look for it they won’t. A great producer said to me in 1985  that you need to get your name on as many albums as possible because it becomes your credibility.  He was right and it served me well over the years. When I saw many of the younger folks at the recent NAMM show, none of them at any company had any idea who I was or what I did. These were guys at synthesizer and electronic music companies! In life it is all about your credit and credibility.

As a Musician how do you expect to build a lasting legacy for recording when at the end of the day nobody will know your musical accomplishments because it is not available for them to see.This has to be changed. Too much time has gone by already and the RIAA or NARAS,BMI,ASCAP or any organization that depends on recorded music needs to step up and become a voice for those who have dedicated their lives to music. In the end our credit is what counts so when 3 years from now someone hears a great recording it is immediate that they can see who made the music they enjoy listening to.