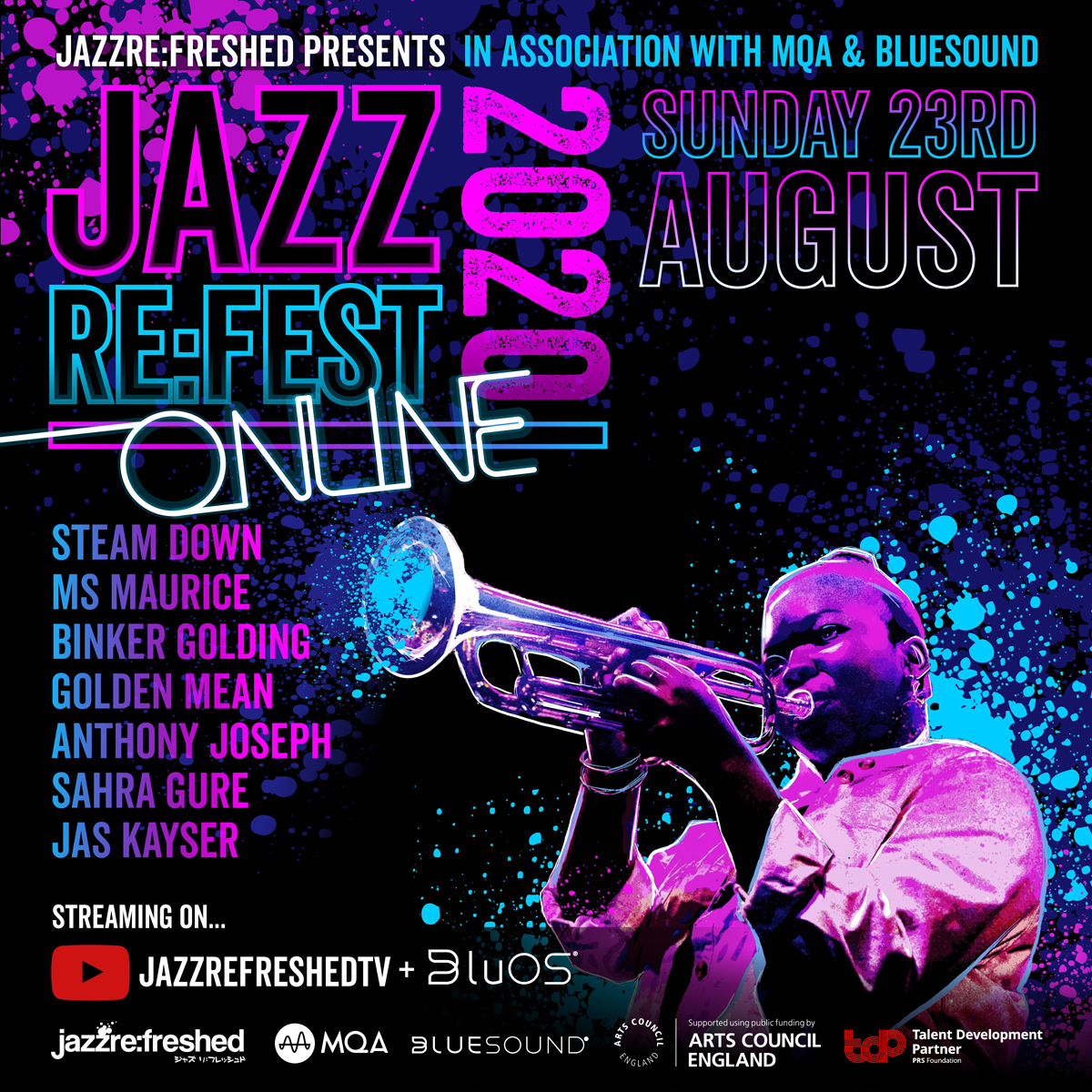 Some of the most exciting emerging and established artists are due to perform via YouTube and in hi-res audio to Bluesound’s international audience at 5pm on 23rd August:

7th AUGUST 2020 LONDON, ENGLAND Renowned music and arts organisation JAZZ RE:FRESHED will bring its annual festival JAZZ RE:FEST online this year, as part of a digital strategy to keep UK jazz thriving while venues are closed, and continuing to support musicians whose performance opportunities have dwindled as a result of the global pandemic.

Brought to you in association with MQA and Bluesound, JAZZ RE:FEST 2020 will be taking place between 5-9pm BST on Sunday 23rd August. The virtual showcase, taking place at The Mill studios behind closed doors, will be streamed on the Jazz re:freshed YouTube channel. The performances will also be broadcast, at the same time, in MQA studio-quality audio via Bluesound’s BluOS Controller app directly into the homes of Bluesound’s hi-res speaker owners. Owners of other BluOS Enabled devices from NAD Electronics, DALI Loudspeakers, and Monitor Audio, will also be able to enjoy the exclusive MQA audio stream through the BluOS Controller app.

The amazing four-hour show will feature performances from breakthrough and established acts including Binker Golding, Sahra Gure, Steam Down, Ms Maurice, Golden Mean, Jas Kayser and Anthony Joseph, bringing the festival’s signature atmosphere and excitement directly into viewers’ and listeners’ homes. JAZZ RE:FEST is an annual one-day festival produced by JAZZ RE:FRESHED, celebrating jazz and jazz-inspired music and culture. Usually hosted at Brighton Dome, the festival was recently cancelled due to COVID-19 related venue closures and will now take place behind closed doors at The Mill studios in London. As a not-for-profit organisation, Jazz re:freshed will be encouraging donations on its YouTube channel from festival viewers.

Adam Moses, co-founder of Jazz re:freshed says: “Despite barriers, we are still on a mission to celebrate a genre and musicians whose performance opportunities are severely reduced right now, and to showcase the incredibly diverse, colourful, expressive and creative world of jazz music and alternative culture. The festival has been the perfect launchpad for pioneering artists such as Moses Boyd and SEED Ensemble, and it’s great to return with a mix of fresh talent and established acts, and with the support of MQA and Bluesound to deliver the performances remotely in studio-quality resolution.”

Mike Jbara, MQA CEO adds: “MQA is on a mission to help artists connect with fans by allowing them to hear the full musical performance, as if they were there. The performers showcased at Jazz re:freshed events are brimming with originality and energy, and their artistry is fully revealed in this way. We are proud to be a small part of the events imagined by Jazz re:freshed.”

The full festival will be streamed live from 5-9pm on Sunday 23rd August via YouTube.com/jazzrefreshedtv and in MQA audio to Bluesound speaker owners and BluOS Enabled devices.

The festival will be operated via a ‘2 stage’ set-up (stages on opposite ends of The Mill’s large studio space) with each band performing for approx. 30 mins. Musicians will be socially distanced and one stage will be sanitised while the other stage is being used. Bands will be given scheduled times to be in and out of the building to ensure minimal overlap and keep numbers to a minimum.

JAZZ RE:FRESHED has recently been shortlisted for Best Independent Label in this year’s AIM Awards and both Digital and Innovation awards at the 2020 Jazz FM Awards.

Not for profit Jazz re:freshed is a small but relentlessly determined organization. The core of our mission is to globally elevate, amplify and spotlight the breadth of expression in UK Jazz, while breaking down the boundaries for audiences to access the music. We have a forte for spotting talent and with our small not for profit record label have already had some success in supporting the launch of Ashley Henry, Richard Spaven and Nubya Garcia’s recording careers and in 2019  secured a Mercury Prize Album of the Year nomination for Cassie Kinoshi’s SEED ensemble debut release, Driftglass.

Our weekly residency is our foundation. Now in its 17th year and being mentioned in almost all UK Jazz media articles as one of the key venues for opportunity and talent discovery. Our 2nd flagship activity is our annual one day festival, JAZZ RE:FEST now in its 8th year and receiving award nominations. The project that has really contributed to changing the UK Jazz landscape on a global scale, is our international showcasing project launched in 2017, JAZZ RE:FRESHED OUTERNATIONAL. It featured artists including Shabaka Hutchings, Nubya Garcia, Ashley Henry, Moses Boyd, Ezra Collective, Sarathy Korwar, Gogo Penguin, Nerija, Joe Armon Jones, Sarah Tandy, Blue Lab Beats, Kokoroko & Steam Down – in short many of the artists now enjoying healthy spotlight and some as a direct result of their showcases.

Using pioneering scientific research into how people hear, the MQA team has created a technology that captures the sound of the original studio performance. The master MQA file is fully authenticated and is small enough to stream or download, while also being backward compatible, so you can play MQA music on any device. MQA’s award-winning technology is licensed by labels, music services and hardware manufacturers worldwide and is certified by the RIAA. MQA is a UK-based private company.

Note: The audio from the festival will be captured at 192kHz resolution and ‘folded’ using MQA’s ‘music origami’ technique. The exclusive hi-res stream will be played through Bluesound’s MQA-enabled audio devices, unfolding the encoded stream to reveal the original studio performances.

An alliance of audiophiles. We are the designers, engineers and individuals who have spent our lives in the music industry. Our founders helped pioneer HiFi in the 70s – innovation and the pursuit of perfection in audio runs deep in our collective DNA. Bluesound’s sole mission is to create innovative wireless audio products and technologies that allow for the most true-to-live performance music reproduction possible, utilizing the most advanced, state-of-the-art digital technology.

BluOS™ is a premium multi-room audio ecosystem that manages stored and cloud music sources and playback, with support for high-resolution audio streams up to 24/192. Adopted by some of the most renowned hifi audio brands and integrated with numerous smarthome and voice control systems, BluOS allows for interoperability among enabled devices across brands for maximum versatility and use

cases. Integrations with popular streaming music services like Tidal, Spotify, Amazon Music HD, Qobuz, and Deezer, as well as featuring support for FLAC, WAV, OraStream, MQA, and other high-resolution formats and codecs, BluOS offers virtually unlimited access to music of all genres for any occasion. Made up of an operating system and a control application for smart phones, tablets, and PC desktops, BluOS is the ultimate choice for the modern audiophile.