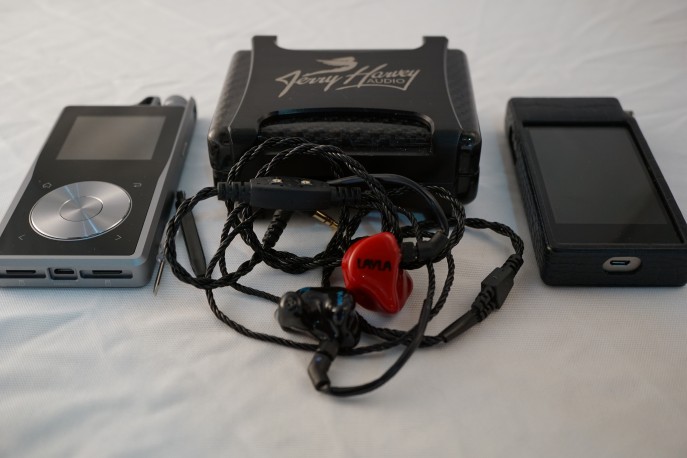 Walking through the corridors of CanJam at RMAF last fall I was constantly amazed at the level of innovation on display. Evolutionary and revolutionary concepts were being brought to market by an ever growing number of passionate audio engineers. While I spent several hours over the course of the show examining and listening to many new devices the booth I kept returning to was Jerry Harvey Audio’s. I am already a customer of JH Audio having purchased the JH16 freq phase customs a couple of years ago. They were, for quite awhile, my personal reference in ear monitors. So when Jerry Harvey and I spoke and he mentioned that the newest member of his reference Siren Series, the Layla’s, had taken over the pinnacle of their product line and that they represented the fulfillment of what he had been striving for sonically over these last twenty years, that is a statement! They were, in his words, his first true reference mastering level monitors.

I have enjoyed my own personal set of JH16 Freq Phase CIEM’s for a couple of years now. They have a robust low end and I have put them through their paces over significant travel. Jerry commented it was time for me to upgrade and asked his staff to fit me for a pair of custom Layla’s. This was one of those offers you cannot refuse!

Generally, when you order a pair of custom IEM’s the creation time runs about a month. I was fortunate that CanJam was right before the JH Audio team was about to move to a new facility in downtown Orlando. So they hopped on mine just before the move and I had them in ten days. A nice surprise and much appreciated! Close examination of the Layla’s revealed a high build quality as well as an optional choice of a new custom cable from Moon Audio  with four pin screw-in connector that is much more robust than the standard two pin that has been the standard for the IEM industry for some time. I do not always take the time to carefully put my IEM’s in their case and I have broken pins off a couple of times. Both times this was with my JH16’s and both times I had to send them in for repair. The service at JH Audio is amazingly good.  The new connectors are much more robust and secure. Internally the Layla’s are Quad Low, Quad Mid and Quad High counting twelve drivers per side being fed by Jerry’s most advanced 4th order crossover. A three Stainless Steel bore design allows each frequency range its own port and also allows for perfect in phase frequencies; a hallmark of JH Audio. A 20 Ohm impedance allows compatibility with almost any source.

Something else that is different is the bass adjustment found on the cable near the 1/8” stereo plug. A small screwdriver is included so you can make you own adjustments to the Quad bass drivers on each side. When tuned to 0 the Layla’s are a world class mastering monitor with a flat response. Want to turn it up? Turn to the right up to another +15dB! Bass heads rejoice! My personal preference was the 12 O’clock setting up around 6-8dB. Regardless of your bass preference the Layla’s can put you there. Something that IEM’s previously were unable to customize on the fly without equalization. For the professional they can be the king of the studio while on the job and the club king out the door. One stop shopping.

My early listening showed the Layla’s to have a nice smooth presentation throughout the frequencies. The sophisticated 4th order crossover allowed the music to come through without interruption between Low’s, Mids and Highs. Listening to Wings Wingspan Uncle Albert (AIFF CD RIP 16/44.1) on my Astell & Kern AK120mkII the Layla’s served up a wonderfully coherent soundstage. The early stages of the song include a rainstorm with a gentle musical line and a crisp but faint cymbal in the background. Keeping all of these elements in play within their correct space and scale is a challenge for any headphone. The Layla’s nailed it and kept the sense of space as well giving breadth to the storm and intimacy to the melody. It was a lovely presentation.

Next on the hit list was Buena from “Morphine’s Cure for Pain”. (AIFF iTunes 16/44.1). This is a low end lovers dream song as the lead instruments are bass guitar (Two-String!) and Baritone Sax. This small ensemble digs deep into the register in a small club style arrangement. I generally set the Bass tuning at the 12 o’clock position. This takes the Layla’s into similar territory as my JH16’s and I like that boost in the bass. However, I used the as an opportunity to turn it all the way up to +15dB. Holy subterranean Batman! Generally, to get this kind of bump I would turn up the knob on my SVS subwoofer’s 1000-watt BASH amplifier and watch the walls shake. I suspect it was just my head moving this time and not the sheetrock in the room. I am not going to use this setting on a regular basis but the flexibility to get to this level of low end is astounding.

Staying in the club but changing genre’s I queued up Alexis Cole’s new Dazzling Blue album. (AIFF 24/192 HDTracks) This is a very well executed tribute album to Paul Simon. The first track is “St. Judy’s Comet”. The upright bass guitar, acoustic guitar, percussion and Alexis clear vocals makes this a treat for anyone who enjoys intimate soft jazz style music. The ability to capture the resonance of the string of the upright bass as it vibrates beyond the note is rare. The rasp as the string snaps back to position across its fret board it clear and positionally accurate. While the rasp is being relayed it is not interfering or smearing the clarity of the guitar work. The soft pluck and full tone of the guitar comes through with stunning clarity. The hand work on the percussion almost lets you see the resin on the hands as they strike the drums. A neat trick and much appreciated.

Another low end champion is Daft Punk’s “Lose Yourself to Dance” from Random Access Memories (AIFF 24/88.2 HDTracks) The bass sets the beat from the start and drives the melody forward inexorably. Jerry designed the Layla’s to be a reference IEM. So this time I turned the bass all the way down for a flat presentation. Certainly there is not the direct bass energy you would expect from a +6dB boost. I was gratified by the still wonderful presentation. I am generally not a fan of standard reference tuning. A lot of my listening is while traveling and the extra bass helps mask the external noise from planes, trains and automobiles. Perhaps this is the diet I should be on rather than the higher calorie pro bass standard fare. T he measure of a great CIEM is its ability to clearly identify  each component of the presentation its proper space. There are several melodies and counter melodies between Pharrell Williams vocals as well as the synthesized vocals adding their counterpoint to his lead. The clapping in the middle of the song sounds like people are in front of you clapping to the rhythm. The sound is unmistakable and distinct hand on hand contact.

Jerry spent some of his early Audio engineer days running the board for Van Halen, so in honor of the 38th anniversary this month of Van Halen I could not  resist ending my listening with “Ain’t Talking’ Bout Love” (AIFF 24/96 HDTracks). Crunch… Growl… We had never heard anything like this when the needle dropped on the album in 1978. (Yes, I still have my first pressing vinyl) If anyone could make the perfect Custom In-Ear Monitor to convey the shear power and enthusiasm that defined Van Halen it is Jerry Harvey.  Jerry designed  Alex Van Halen’s original in ear monitors.I have been to many VH concerts and the energy, power and precision of Eddie, Alex and Michael always blew me away. The Layla’s take me back to that time band was fresh, rocking and David could hit all the notes. This is what I want to hear and remember and I get that with the Layla’s. It is their Siren song. Well done JH Audio and thanks for the audition. Highly Recommended!

Cons:
Price. $2195 in my version is the low end. They scale up with materials options to nearly $3k
Cable is thicker to accommodate the bass adjust. Some people may prefer a thinner option.
No iPhone controls or microphone available at this time.