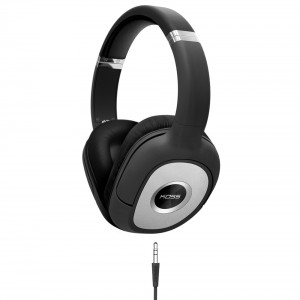 Koss has produced some of the best selling headphones on the market, the most well known being the PortaPro. The company was founded in 1953 as a hospital TV rental company, and a little while later the CEO, John Koss, was looking for new ideas to kickstart the company. He teamed up with Martin Lange who was an engineer and somehow developed a headphone while trying to make a portable phonograph.

I have had the chance to review a few Koss headphones in the past, specifically the PortaPro and the DJ200. I was impressed by the PortaPro sound for such a cheap price. The aesthetic was very interesting to me, one that presented a quite retro look, while looking a little futuristic. However, the DJ2 didn’t “wow” me in terms of sound reproduction and construction, and didn’t seem to be built exactly as a DJ headphone should be. Upon receiving the SP540 in mid December, I was excited to see if Koss would impress me. I didn’t have any preconceived notions going into the headphone, as it was only released a short while ago, and it didn’t create a huge spark in the Head-Fi community.

First off, the SP540 packaging has a large picture of the headphone, along with a white background; a simplistic start. Turning it over, I find that the back has pictures describing the headphones, all done in a modern block style. Taking off this slip on cover, you are greeted with a brown box, with Koss branding on the top. Upon opening this up, the headphone is found flat folded within a hard black case, it is very sturdy and is perfect for carrying around the SP540 in a sleek fashion.

The case is fit to the headphones and with a velcro baggie in the middle for the cable to be placed in. Also in the case is the detailing of the fantastic lifetime warranty, which I cannot hold my excitement for. This is a crazy idea from Koss that barely any other company recreates. It’s an amazing feeling to know that even if you break these in 10 days or 50 years, they have your back. Reading stories of people’s experiences of their warranty service, they detail that it is as easy as putting in a check for a few dollars for return shipping and shipping it to Koss, and voila, a new headphone will be arriving shortly.

The SP540 uses the D-shaped earcup that was first used on the PRO4AAA from Koss. It is an earpad design that is supposed to,“mimic the shape of the ear”, with the objective being an incredibly natural fit. Unlike most advertisements, this is actually true as the seal is quite good, making for an extremely isolating listen. With music playing, at a decent level, noise is hushed to a very faint whisper, if not completely dispelled (even without music playing, sounds are quieted by about a quarter). The earpad is also slightly angled, making for an even better fit, and made of a material called protein leather that is comfortable and smooth to the touch. While the earpad gets a little hot while in use, I am never even close to sweating after a couple of hours.

These headphones fit me perfect, as I have a medium sized head, but be aware that I am at the last notch on the headphone (those with larger heads may find fault here). To put into perspective, with the Sennheiser HD650 I still have nine notches to go till I get to the end. The headband and cushioning are thin, and causes slight annoyance to the top of the head. The headband is also a durability concern, as it doesn’t feel sturdy, and is made of plastic.

This Koss headphone is built from a mostly plastic and a little metal mix. The three metal parts of the headphone are the earcups, which has a small aluminum ring in the middle. Luckily, the headphones most vulnerable areas are made from metal: The part where the headband and earcup meet and the headband adjusting mechanism, meaning that a snap here is quite unlikely to happen. But, the top of the headband that wraps around your head doesn’t seem to be made of metal, and does happen to feel susceptible to snapping.

The parts made of plastic are a matte black and feel light and a fragile in the hand. The largest ring on the ear cup is also made of a silver colored plastic, and seems cheap when tapped on. Overall though, the headphone is built well, with the more vulnerable parts of the headphone made of metal, and the less sensitive made of plastic.

A 4.5’ foot, 3.5mm to 3.5mm black detachable cable is included (a good length for portable use). However, the cable itself isn’t optimal, while it is a light, it is fragile and has noticeable microphonics. The headphones aesthetic is a sleek black and silver, while it looks good on a desk, when worn, the headband hinges and earcups jut out a little. I have had no problem going outside with their aesthetic as of yet, though.

The following sound impressions were made using the 3.5mm jack on the WA7 to my computer. For music, I use a mixture of HDTracks music and my own personal music. All of my personal music is 320kbps or above. The tracks I mention below are picked because certain parts of the SP540 can be heard well.

When I first put on these headphones to adjust, I was less than impressed. I was finding aspects of it that I completely disliked and couldn’t see others enjoying it either. Nonetheless, I wanted to review it, an honest review, so I set it up to burn in. After around five days, I put them back onto my head and the sound had somewhat blossomed. I am not a believer in driver “burn-in”, but this might have skewed me to slightly accept it. While some aspects remained unaffected, a lot of good came from letting it sit for awhile.

The bass is fairly detailed, but doesn’t go deep. The bass on Pink Floyd’s, “Money” comes across less than stellar, with the bass guitar fading too quickly. The SP540 is a neutral headphone, but the mids may be too present, with the bass sometimes being overpowered, not to the point of the bass being un-hearable. On Radiohead’s, “High and Dry” the bass has good definition, yet doesn’t have a good punch, or a cohesive sound.

The midbass on Radiohead’s, “Weird Fishes/Arpeggi” shows some punch, but sounds as if it is a bit disjointed. One of the best albums of the year for me was Run The Jewels 2, and I couldn’t write this review without mentioning it. On, “All Due Respect (Feat. Travis Baker by Run The Jewels, the midbass is detailed, and can be heard well.

Sufjan Steven’s, “Casimir Pulasaki Day” is detailed and fluid, while the upper midrange is a little harsh, but they aren’t a problem. One of my major caveats with the mids is that they sound as if they have a slight cover on them, just dampening them, and putting a very small veil on them. Listening to Swans, “A Piece of The Sky (feat. Jarboe & Akron/Family)”, Michael Gira’s voice is detailed, and fluid, yet the veil highly affects this song, one of the most out of all of my testing. From HDTracks, I heard the song “Houses In Motion”, by The Talking Heads and the vocals are up front and center. The imaging here works well with each instrument in the correct place.

Radiohead’s, “Paranoid Android”, the guitars intro plays well, detailed and quick. Thom’s voice never gets above a little harsh when singing in the upper mids, they are placed well in my opinion. Not too far forward, but finding a nice sweet spot. Another one of my favorite albums, Salad Days by Mac Demarco, specifically the song, “Treat Her Better” the guitars sound smooth, if not lacking a little detail.

The SP540 sounds like a closed headphone, the soundstage here is very closed off. When there is too much happening in the song, the Koss breaks down a little. This is very evident on songs such as “Lie, Cheat, Steal” by Run the Jewels, “All Of The Lights” by Kanye West, and the intro to, “Daft Punk is Playing at My House” by LCD Soundsystem.

The treble on, “Speak To Me” by Pink Floyd is detailed and crisp, and features good extension. The cymbal is clear and doesn’t overpower. Radiohead’s, “Dollars & Cents” features good extension and is very clear. As I switched over to my Galaxy S4 (un-amped), I found little difference, while I think to get the very most out of the SP540 you will need an amp, but that is for the last 3%. It sounded a little less airy, but other than that, no differences could I detect.

Overall, the SP540 is a comfortable headphone that works well on the go due to its ability to fold flat as well as its case. The cable is short enough for portable use, but a little flimsy. The main drawback to this headphone was the veil that it presented as well as the lackluster bass. Sadly, I didn’t like the SP540 all that much, although many people I know do, so you may find it to your liking. Although I would definitely try to audition them before purchasing.