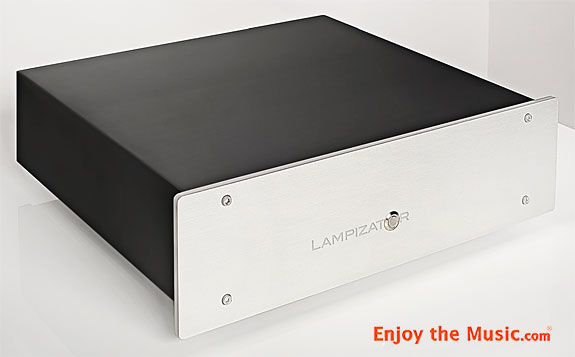 Fall in love with your music all over again.

The Amber III DAC incorporates LampizatOr’s DS53 digital engine, a derivative of the digital engine used in their Pacific DAC. Per LampizatOr, they’ve standardized this Delta-Sigma design throughout their line, feeling that it is sonically superior to the R2R designs they’ve tested.

While some audiophiles may have a hard time wrapping their heads around that one, I can assure you, after rigorous testing that the Amber III doesn’t possess any of the metallic glare, plasticky timbre or hollow lifelessness of bad Delta Sigma designs. This DAC is the real deal, through and through, and I’d venture to say the best Delta Sigma design I’ve heard in an extended private audition by a long shot.

The Amber III is built like an absolute tank, the package arrived weighing in at 25lbs., and the DAC itself took up an entire rack space in my Pangea Vulcan. The test unit came with solid state rectification for the newly redesigned power supply, but in typical LampizatOr fashion, production models will use tubes, with an ECC99 for the rectifier and ECC82 output buffer.

The basic unit offered a single set of RCA outputs, though balanced outputs are available for an additional charge. As each unit is completely hand built, other options such as volume control can be ordered, as well, for an incremental cost. For inputs, the test unit was equipped with an Amanero 384 USB interface, S/PDIF and AES/EBU inputs. The DAC itself offers both PCM and DSD decoding.

But enough with the build, let’s get to the fun part: the sound.

The first area that impressed me right off the bat was the incredible soundscape and grandiose sense of scale. This DAC is an absolute soundstage king, placing the instruments out beautifully within an absolutely massive and realistic space. Orchestral pieces absolutely floored me, as the Amber III was so open and spacious it made my Stax L300 Ltd. sound like a full-size speaker setup.

Listening to “Home to Dragons” off Hans Zimmer, Jacob Shea and Jasha Klebe’s Planet Earth II Original Soundtrack, the opening notes seemed to come from several feet outside the headphone. Moments later, as the full ensemble enters, I’m transported to an orchestra hall, with the music completely surrounding me. I’ve used this soundtrack for full-size 2-channel testing, and the music felt no less engulfing through headphones with the Amber III driving the bus.

The sense of depth offered here is truly special. Music layers out neatly in front of you, giving the music a lot of dynamism and a real sense of magic. Great depth layering is really something you only get with the best of the best DACs. I had the opportunity to have an extended audition with the Schiit Yggdrasil A2 earlier this year, and one of the areas where I felt it really pulled ahead of the Chord Hugo 2 was how it portrayed fine layers of depth that made the stage feel much more dimensionally tangible. I would venture to say, the Amber 3 is able to reproduce these layers just as well, if not even better than the Yggdrasil could.

Listening to “Citizen” off Broken Bells’ self-titled debut album is one of my favorite test tracks to get a sense of how a DAC layers out depth in front of you. Producer Danger Mouse progressively lays more and more parts onto the stage in varying distances, so it really gives you time and space to discern each layer’s spacing relative to the others. Listening on the Amber III took my breath away from start to finish. Not only did it pass the depth test with flying colors, I was noticing things in the song I’d never noticed before. Everything had room to live and breathe in its own space. Instruments decayed with scintillating detail. I loved the way the synthesizer sat back from the main vocal, then chorus singers enter later revealing a new layer in the front of the stage. It was a truly captivating listen. Very few DACs are able to offer such a grand sense of scale and dimensionality.

Moving on to some other aspects of the sound, one thing I really loved about the Amber III was the level of dynamic punch and impact. I mean this thing really punches your lights out. Listening to Smashing Pumpkins’ “Bullet with Butterfly Wings”, I absolutely loved the meaty, impactful “thwop” of the toms over the verse. I also noted that the drums had an incredibly deep, deep sense of inner resolution. Having spent well over a decade playing music live and in the studio, it’s about as close as I’ve felt to being right there in the room with the drum kit.

Combined with the open, airy sound and realistic staging, this visceral and highly detailed reproduction leads to a sound that is ultra-transparent. I really can’t emphasize enough just how well the LampizatOr Amber III does when it comes to putting you there in the room with the band or inside the orchestra hall.

Going beyond the technicalities, the tone of the LampizatOr Amber III really impressed me. The music was incredibly lush, organic and full bodied, instantly outclassing my Chord Hugo 2 in the tone department.

Amber III did an outstanding job of staying smooth and musical at times when other DACs can sound a bit harsh or sour. One such example is the pianos from Jack White’s “Hypocritical Kiss”, off his 2012 solo debut Blunderbuss, which don’t always play well with every piece of equipment. The midrange on the Amber III stays smooth, with a sort of measured musical ease, and treble also remained smooth and free of any harshness or stridency, coming off as airy, clear and grain free.

The low notes shined as well, with phenomenal impact, rumble, definition and resolve. The bass frequencies didn’t sacrifice speed or power, delivering both in spades, as good equipment should. Overall, there isn’t much to knock sonically, this piece is absolutely stellar in every sonic regard.

At the end of the day, the LampizatOr Amber III really leaves nothing on the table. I guess I could complain about its rather spartan look relative to LampizatOr’s other incredible showpiece DACs? But to be honest, I rather like its simple black look with a single glowing blue light. The only real knock, I suppose is the single set of RCAs, where competitive DACs in this price range offer multiple outputs. Of course, each unit is hand-built, so you can order additional if you need them.

When it comes to sound though, I’m hard-pressed to find any areas of compromise. Few DACs are able to offer the combination of grand scale, layered dimensionality, dynamic punch, purity of tone and deep inner resolution in a single piece. It is absolutely the real deal.

Though it’s the most affordable piece in the LampizatOr lineup, the Amber III doesn’t come cheap at $2750 on up depending on options (seen above in custom red finish for extra cost). But if that is within your means, then definitely give it an audition. It’s a lovingly hand-crafted piece, it’s the total package from a sonic standpoint and it will reintroduce you to the songs you love, as if you’re hearing them again for the first time.