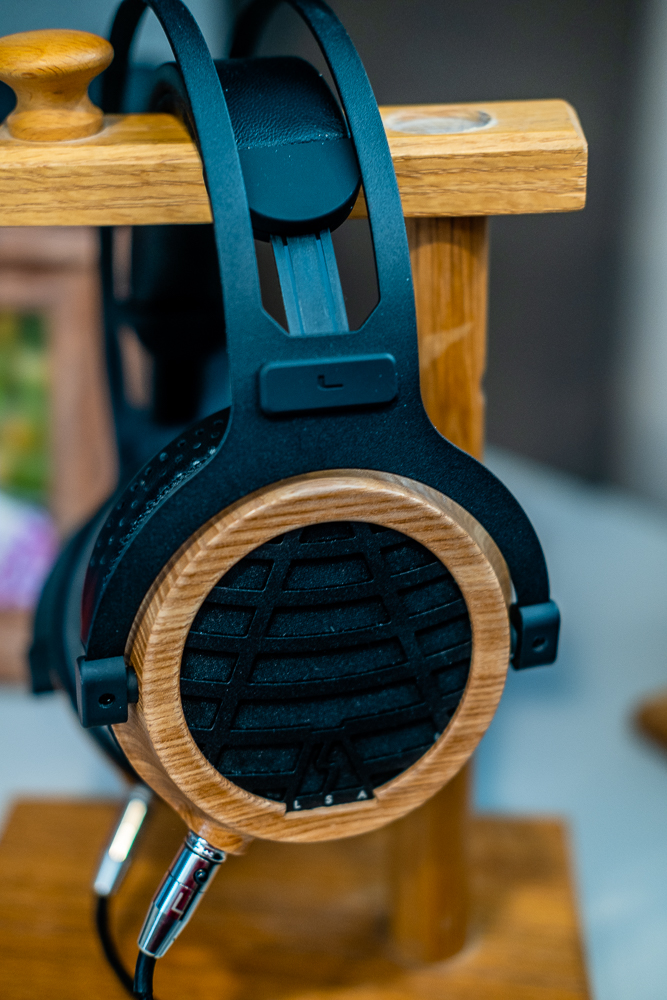 Planar headphones have been around for many years and since 2009 there has been a steady influx of innovative designs that have entered the market. Prior to 2009, there were few companies engaged in making new headphones for personal audio. Waves of new companies started working on planar designs that they found were transparent with a bass extension that many electrostatic headphones were lacking while offering good value for less money than their electrostatic headphone competitors and yet were equal in the midrange and offered a pristine treble extension.

The beauty of the planar designs was in knowing that no special amplifier was needed to drive them which made the cost of planar ownership less expensive and as good or better than electrostatic designs at a more attractive price.

Over the last several years there have many designs that have captured the imagination and brought the sound of magic to personal audio listening. Walter Liederman is better known to many, over the last quarter of a century, as Underwood Wally, selling high-end components at affordable prices. Walter’s reputation is one of integrity and he has thousands of satisfied customers. LSA which stands for  Living Sounds Audio and is owned by Underwood Hifi manufactures high-quality speakers, saw the explosion in personal audio and contacted  Kennerton, a company in Russia, to OEM the LSA HP-1 which is similar to their top-selling Odin model headphone, a product offered at a higher retail price than the HP-1. The driver has been modified for the LSA HP-1 and many feel it sounds more linear and balanced than the Odin. The exclusive new design is an interesting headphone that sounded good out of the box when it arrived, though burning the unit in for an additional 50 hours made some improvement for critical listening.

Walter’s goal for the headphone was to offer a high-value proposition and wanted the HP-1 constructed using the highest quality of parts. The meticulous design and creation include beautifully made wood earcups and innovative features not found in any other planar design.

LSA  HP-1 is a wood cup open back over the ear design with a unique headband without sliders that easily adjusts to the listener’s head automatically and creates a perfect and comfortable fit with the soft leather lambskin pads.

The supplied cable has no deficiency in sound quality and the copper Litz design never called attention to itself during the long listening sessions.  Included is a leatherette traveling case for easy storage of the HP-1 or for the road warrior who won’t want to leave home without the HP-1.

The Drivers are 40 ohms with an efficient 104 dB sensitivity. Designed for the sound quality this planar driver is easily driven by the headphone amps in portable devices making it easy to use anywhere with any music player or phone. The high-quality wooded earcups are made from maple wood, while the housing is made from aerospace aluminum and steel, and the soft earpads are composed of fine lambskin leather.

LSA’s HP-1 is made in Russia using an in-house design that is 40 percent lighter than the Kennerton Odin, sounds better, and is an exclusive design for LSA. The whole package with the included storage case is available at Underwood HiFi for $1399.

Many people are always curious about the technical information of most headphones under review and are done. Most of my readers know I am more about the sound and I could describe this in one or two words and end this review easily, but that not usually my style, or I could just say go buy the HP-1. Yes, it is that good and will not disappoint. The reader who wants more just continue reading for all the goodies I found while listening to this magnificent transducer.

Using the Auris Headonia 2A3 amplifier with the Marantz SA10 reference player as my source I was eager to get to listening critically. Audioquest Cables were used throughout, an Audioquest Chocolate from the iMac to the SA10 and Audioquest Wind interconnects to the Headonia and source. Power regeneration was done by the Core Power Technologies Deepcore 1800.

The soundstage was layered and had excellent space within the stage. Different sections of the Pops orchestra were easily noticeable. Detail retrieval from these orchestral compositions is always welcomed, hence I could hear the strength of the midrange and be impressed with the transparency of the sound of the Pops. The music was breathing life and a live sound that was spectacular.

Instruments such as horns and chimes were never harsh and always sounded exceptional. I could hear clearly the horn section and the speed of the HP-1 was noticeable with the large dynamic swings in the large scale recording being reproduced with the speed necessary to deliver the power to make the recording believable. The HP-1 was fast and dynamic and never collapsed during demanding passages.

“Three Pieces From Schindler’s List For Solo Violin And Orchestra – Theme From Schindler’s List” as performed by Itzhak Perlman and the Boston Symphony Orchestra is a haunting and beautifully composed piece that touches the human soul and delivers comfort that when played back in a great system captures the listener and brings tears to the eyes. Itzhak Perlman playing the violin captures the listener with its melody. Musically accurate the HP-1 was able to deliver a flawless performance and the performance brought me to tears as I could feel the emotion of the music and the meaning of what the music about touched my soul.

Heather Masse’s vocal is pure and angelical with clarity and a special delivery rarely found in vocalist. “Fallin’ Rain” from her latest album “Hold On” with pianist Jed Wilson is special. Her vocal captures the imagination and her delivery is always magical and hypnotizes the listener.

Heather made her mark by being one of the singers in the Canadian Folk group The Wailin’ Jenny’s. Masse is an American and her roots are dug deep into jazz standards, this album and composition are more contemporary but never takes her away from her roots. Heather only needs a piano compliment and this song is beautifully composed and shows the strength and beauty of her vocal.

Articulated beautifully with the vocal not missing in this performance the HP-1 was able to capture not only Heather’s vocal but the mastery of the piano playing by Jed Wilson The inner detail retrieval and body of the instrument was magnificently reproduced and created a dynamic mesmerizing duo that made this song come to life.

James Taylor’s “American Standard” album has the master songwriter doing American standards in the Taylor style he has developed over his magnificent career. James on “Moon River”, one of my favorite all-time classic standards, sounded alive. The LSA HP-1 continued to impress with the ability to just get out of the way and make the performance memorable.

Taylor’s harmonica was in its own space and his voice was as good as I have heard it reproduced. Taylor’s articulation on this tune was exceptional and clearly presented. The acoustic guitar was clear and sounded exceptional with the tonality of the instrument all noticeable.

Jerry Garcia and David Grisham come to life on “Been All around the World” and the lead track is a beautifully recorded acoustic track that has Papa Bear’s vocal and guitar in synchrony with Grisman’s mandolin and the sound is nothing short of spectacular. Garcia made his best music away from the Grateful Dead with David Girman and this is as live as recorded music can sound.

Grisman’s mandolin playing is nothing short of spectacular. Detail of the instrument was all presented without compromise, instrument string plucking and the body of the instrument beautifully recreated making this a memorable performance.

David’s mandolin had exceptional air and you could hear the detail of Garcia plucking the strings on his acoustic guitar and the magic of two master musicians in complete harmony. The LSA HP-1 vanished during this performance, the music came to life and it felt as if I was hearing this recording for the first time. Dynamic and spectacular reproduction of a melody that was flawlessly recorded.

Lisa Loeb’s “Skeleton” from her latest “A Simple Trick to Happiness” showcased this excellent singer-songwriter. Her vocal performance is one of my favorites and over the years she has developed her own identity.

Loeb’s vocal on “Skeleton” is a story and the melody flowed on the HP-1 while the band had excellent space within the soundstage as well as air and separation, with Loeb, front a center, defined in her own space. The music had life and the HP-1 delivered exceptional transparency in the performance.

The LSA HP-1 is a spectacular planar design that Walter Lieberman had the insight to have developed and made under his own Living Sounds Audio brand. Made in Russia and designed by the folks at Kennerton with Odin as a starting point, this innovative new design with its unique headband design made me smile. No adjustment was necessary and the leather headband was comfortable. The cups completely sealed over my ears and the earpads were beautifully constructed with soft lambskin leather that made the marathon session memorable.

Soundstage lovers will love the wide and deep stage the HP-1 projects. Musicians appear in their own space and the imaging is rock solid and three dimensional and suitable for any type of music. A classical music lover will love the layering of the orchestra with the 3D imaging and you will be able to hear the remarkable inner detail in the recordings. Little details become noticeable that many lesser designs are unable to reproduce.

The LSA HP-1 is another bright star being released during a time when the world is in a major crisis. The HP-1 will make the listener become focused on the music and for me was a major stress relief during this difficult time.

Once in a long while, a product comes into the listening room that takes hold of me and does not let go. The HP-1 is such a product and has been in constant use since its arrival.

If you are looking for a well-balanced sound you need to hear how good the HP-1 sounds. The fact that it is offered for so little money makes this one of the best values in personal audio. Dynamics and musicality are what the LSA HP-1 is all about and one of the best headphones I have heard and worthy of reference status. Highly recommended.