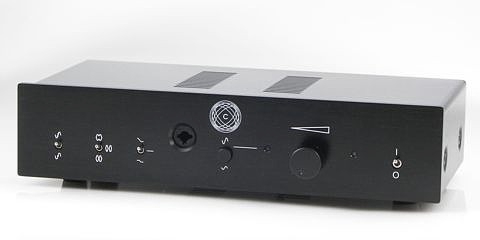 “Welcome to Head-Fi, sorry about your wallet!” So goes a common refrain at the biggest headphone forum in the world. The chase for the tone dragon can consume any audiophile or headphonista. The quest to keep reaching deeper into the music is never-ending. One thread discusses “end game” set-ups. Occasionally someone will decide that they have found their ultimate system and everyone else takes odds how long that will last.

When I first got involved with audio I worked at a brick-and-mortar audio store. Our motto: “Best sound for the money” – and we strove to make that happen. Sure, we were thrilled to sell the high-priced systems, but we mainly assembled modest-yet-amazing ones. We always kept our eyes peeled for affordable gear that could take you close to the summit.

Jan Meier, Ph. D. founded Meier Audio in 2000. The company began as a result of demand for his innovative DIY Headphone amplifier that incorporated a crossfeed circuit into the amp. He posted the design on Headwize (www.headwize.com) and the demand for his DIY kits was so strong he decided to start Meier-Audio. It is based in Germany and has developed a reputation for making great headphone gear without breaking the bank. The Corda QuickStep and PCStep are widely popular portable units. Meier Audio also offers two desktop devices, the Corda Classic Headphone amp and the Corda DACCORD Digital Audio Converter (which incorporates a Crossfeed circuit you can turn on or off as desired). Each is a stand-alone unit that can be purchased individually and used with other gear. This review will focus on using them as a combo. 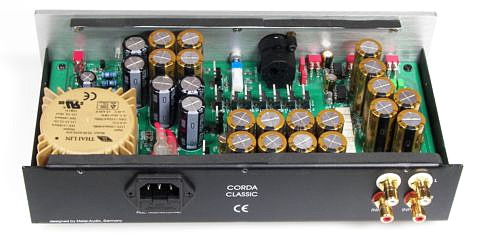 “Machined from virgin blocks of carefully mined unobtanium the…”

Many high-end audio components are built with extraordinary casing and spectacular finish. With some components however, a large portion is spent on the appearance alone, perhaps resulting in an exorbitant final price tag. Meier Audio takes the pragmatic approach. Contained in either a standard Black or Silver basic metal case, the front of the Corda Amp is finished with simple universal switches and a single volume knob. The Corda uses a two-position gain switch (a blue indicator light showing whether it is in the high gain position or not). Nothing extraneous is added to the physical structure. The enclosure gets out of the way using clean and simple lines. 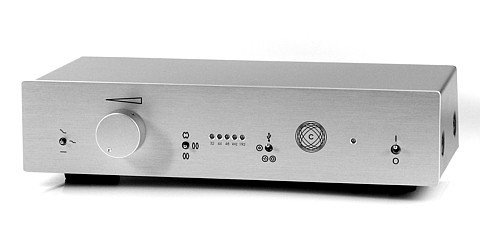 The Corda DACCORD boasts two coaxial inputs, an optical toslink and a single USB (that can accept up to 24/192kHz files). Windows users will need to download a USB driver while Mac users can plug and play. The DACCORD is not DSD capable. There are two RCA outputs: One fixed output for connecting to an amp (like the Corda Classic) and one variable output to use the DACCORD as a preamplifier with powered speakers or a power amplifier. Located on the front are: A tonal balance switch, the volume control for the variable pre-amp outputs, the crossfeed intensity switch, the sample rate indicator lights, the input selection switch, a Power ON LED and the power switch.

The DACCORD utilizes a crossfeed circuit to simulate a natural listening environment. The Meier-Audio website has a detailed page on the basics of what Crossfeed is (http://www.meier-audio.homepage.t-online.de) In short, it is a circuit that feeds partial amounts of left channel information to the right earpiece and parts of the right to the left earpiece to simulate a normal sound environment rather than keeping pure left and right information separated. There are three settings: High, low, and off.

I have owned the Decware Taboo III Headphone amp with their Lucid mode circuit and I have spent time with the SPL Phonitor 2 Headphone amp which also offers crossfeed capability. In each case I have found the approach to be intermittantly useful. Generally, I prefer it when listening to small group music such as: Jazz trio’s, chamber music, club settings, et cetera. These types of recordings benefit from an increased sense of space. I find that using crossfeed is distracting for Rock, Big Band and larger orchestral works. 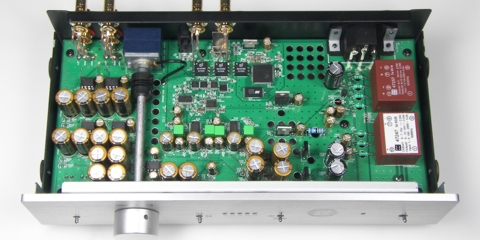 I found the DACCORD’s crossfeed to be subtle. The crossfeed provided a variety to my listening during the ripped CD of Al di Meola, John McLaughlin & Paco de Lucia on their Passion Grace & Fire album (16/44kHz, 1411 bit rate in AIFF). The ability of the DACCORD crossfeed to open up the intimate trio’s performance offered some nice contrast to the listening experience. The sense of space and placment of each artist made the listening experience an almost 3D event. You could almost see where they were during the recording. Turning off the crossfeed removed some of this clarity and dropped the experience to a more conventional 2D image. Still fun but not as immersive. Turning off the Crossfeed removed the depth from the recording.

On Donald Fagen’s “Out of the Ghetto” from Sunken Condo — in 24/88 in FLAC from HDtracks – I used my HD800’s with Toxic Cables Silver Widow cables and it sounded beautiful. One of the sounds I enjoy when listening to small group or Jazz reccordings is the sound of fingers on strings. The Bass players fretting was clear and firm. The shimmer of the high hat was crystalline. The spacing of the instruments was easily discerned within the recording. Next up was the 24/192 FLAC of Chicago V, also from HDTracks. Terry Kath is one of my favorite 70’s guitar players. His crisp rhythym playing on Dialogue Pt’s 1 & 2 provided a solid foundation to the classic tune. The horns had the full bell like ring that keeps me coming back to the early Chicago albums. The Meier stack did not color or amend the recording. I heard the music and not the amp/DAC.

Just for fun I switched over to my HD650’s (with Toxic Cables Silver Poison interconnects as well). This headpohone/cable combo is a favorite of mine and I listen to it often while traveling. Generally, I am using the Audioquest Dragonfly Version 1.0 or the LH Labs Geek Out 1000 as a portable DAC/Amp with the HD650’s. The Meier combo had substantially more power – as you would expect from a desktop based system. Both the Meier and the Geek Out outperformed the Ver. 1.0 Dragonfly. The GO1000 was not as present on the top end and low end slam as the Meier.

I was pleased but not surprised that the Meier combo outperformed two highly regarded portable AMP/DAC units. Time to see how it stacks up to bigger desktop competition.

My primary headphone rig consists of a modified Cary SLI-80 and a maxed out Wyred 4 Sound DAC2 DSDse with the Femto clock upgrade. The Cary upgrades include all of the factory F1 Mod components, except the Hexfred Rectifier’s. I also have added a 4th input, courtesy of Dennis Had (creator of the SLI-80). The Cary, in this form, retails for around $5,500 and the W4S comes in at $2,549. 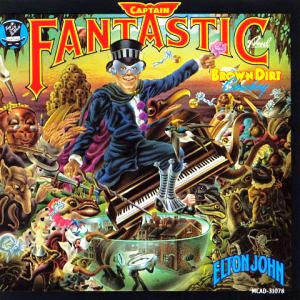 On Elton John’s “Someone Saved My Life Tonight” in 25/96 AIFF off of Captain Fantastic and the Brown Dirt Cowboy. This version from HDtracks is the best I have ever heard. Both combos relayed the recording wonderfully. The Meier gear offered a neutral presentaion not coloring the presentation, but delivering it cleanly. Compared to the much more expensive Cary/W4S combo, the Meier was missing the clean high’s that I experience with the Cary/W4S combo. The shimmer of the cymbals extended longer and higher from the big tube unit. The soundstage was also more substantial. Elton John’s engineers added some L/R ambience that was much smoother and more immersive via the tubes and EJ Sarmento’s finest DAC.

My rig provided additional micro-detail. You could discern the sublte differences between the striking of the mallets on the piano strings versus the plucking of the bass strings. Ultimately, I preferred my home rig. There should be some value for the six fold additional cost! But, the Meier gear had nothing to be embarrased about. They provide great value.

Using the HD800’s On Steely Dan’s “Jack of Speed” from Two Against Nature (running at 24/96 AIFF), the superb bass line walked along with balance and slam. I always enjoy the nice “SNAP” of the snare drum with the high hats singing. Once again, the Meier gear provided an engaging presentation, but left details on the table to the bigger Cary/W4S rig. Audio is a cruel mistress. She does not make stepping up to another level easy. You have to build a quality chain of gear and improvements are rarely a little more money, but a substantial step up. Reaching for the last few percents improvement can get expensive. With the Meier stack you can sleep well knowing you would need to drop much more money to make an major difference to your sound.

The Meier combo provided an overall neutral sonic presentation. I have a clear personal bias toward tubes and the character (some say colorization) they bring to the table. When signal rolled off with both units, it was done in a natural way and never abrupt or overly harsh. 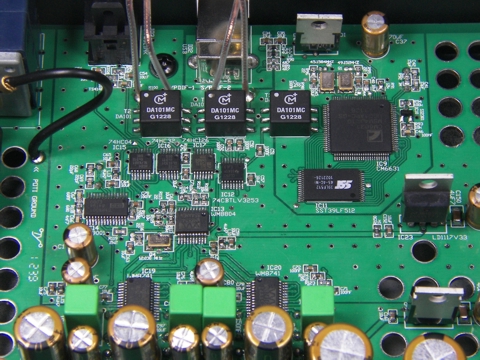 The DACCORD uses Wolfson chips and having spent a long time with the Cambgride DacMagic Plus (with the WM8740 chips), I have a strong comfort level with Wolfson’s presentation. I have found Wolfson’s chips to have a more organic presentation than my Sabre Dac devices. Sabre’s can be a bit clinical and more detailed. Each can be enjoyable, yet they do have their particular sonic characteristics. The Meier implementation was smooth and neutral. I never noticed a bias toward too clinical or too soft. Digital files were received and presented in a direct an pleasing manner. Compared to my Wyred 4 Sound DAC2 DSDse with the Sabre ES9018 reference DAC chip, I was missing some of the small micro details that first attracted me to the W4S unit. However, had I not heard them side by side, I would never feel as though I was missing something. It was a complete presentation, yet it simply did not go as far into the detail.

Again, the Cary/W4S combo is over six times the cost of the Meier stack. The Meier combo had nothing to apologize for in the bang for the buck arena. The fact that I’m seriously comparing the two should shed light on how the Meier overperforms it’s pricepoint in a neutral and honest way.

As I mentioned earlier, my early days in audio were spent searching for “bang for the buck” gear. The Meier combo easily qualifies. If you want your money to go toward your sound and not audio jewelery, this is a pair worth auditioning.

Pros: Cons: A quick word about amplifier gain and noisefloor: Using my HD800’s with the high gain employed, I had more power than with my Cary SLI-80. The Meier was also dead quiet at low volumes with the HD800’s. Using my JH16’s at low gain, the unit was dead quiet at any volume. The 63-step attenuation increased with small signals as I increased the amp volume, but no hiss was evident.