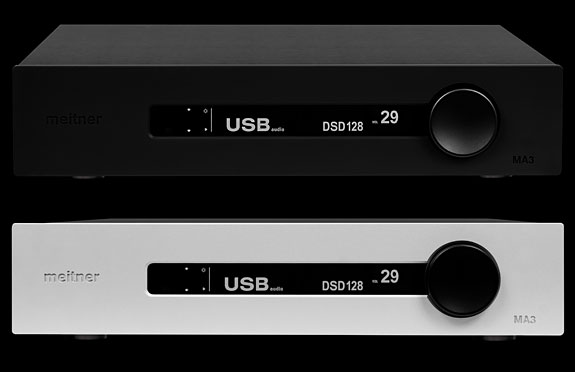 The industry is converging around integrated digital front ends – something to access streaming services such as Tidal, Qobuz, Spotify, Internet Radio as well as your own digital library and some offer a volume control. You may get analog inputs, maybe even a phono section for turntable fans, while some include a power amp stage. Today we are looking at a very special sample of this breed.

First of all, who or what is Meitner Audio? Meitner Audio is the junior sibling of the reference class EMM Labs, based in Calgary, Canada. EMM Labs. It is named after Ed Meitner, as is EMM Labs (Ed’s initials are EMM). For a DAC with variable output, the DV2, EMM Labs carries a list price of $30,000, and they also offer a streamer, the NS1, which lists for $4500. So that makes a total of $34,500 for a two box streaming DAC with volume control.

What if I told you the MA3 Integrated D/A Converter was the exact equivalent of these two boxes for a total of $9500. Well, I’d be lying of course, or at the very least exaggerating. But I wouldn’t be that far off the mark. For the MA3 offers close to the same functionality, and a level of performance that puts almost everything else out there in the shade. It uses the same technology, but in a much lighter and lower chassis, with some reduced connectivity and less elaborate power supplies and some simplified circuitry using less highly specified components.

Exactly how close the MA3 comes in functionality and performance will be the focus of this review. Let’s quickly look at the technologies inside the box shared by the EMM Labs DV2 and Meitner Audio MA3:

· 16xDSD up-conversion for all inputs

Details on these MDAT2, MFAST, MCLK2 and VControl, all unique to EMM Labs and Meitner Audio, are outlined in my recent review of the Emm Labs DV2.

What does the MA3 omit from a connectivity standpoint? The biggest simplification is that the Meitner does not have a dedicated EMM OptiLink connection to an EMM Labs transport or integrated CD/SACD player like the XDS1. The MA3 has AES/EBU, Coax, TOS and USB digital inputs while the DV2 adds a second TOS input and a second coax input as well as that EMMLink, which is rather special. Special, because EMM Labs transports can transmit an encrypted DSD stream which the DV2 and DA2 DACs can decrypt.

The other outputs on the EMM transports cannot pass DSD for licensing reasons so they will automatically down-convert to a lower res PCM output stream. Now this will only be a disadvantage to you if you already own an EMM Labs Transport or SACD Player. Other manufacturers, such as PS Audio, may also output an encrypted DSD stream from their transports but again, only their own partnering DACs can decipher that stream. But this does not stop you playing DSD files on your MA3 – I have downloaded some and put them on a USB key and played them with no problem, and you can play them from your computer or your music server through the USB-Audio input. So I really don’t count any of these limitations as an issue. Do you really need two coax RCA S/PDIF inputs or two TOS optical inputs? I never have.

The next limitation is on the analog output side. The maximum output on the balanced outputs is 4.36 Volts (2.19 Volts for unbalanced). This is industry standard, but if you are driving a power amp directly, as I am, there may be some power amps out there with a low gain which will benefit for the high level output option on the DV2, which adds an extra 4dB of gain (7 Volts). Between you and me, Meitner Audio can increase the gain for you if you ask them but remember it won’t be user switchable. EMM’s Shahin El Rashid tells me that even on the DV2, they recommend the lower output setting for the best sound. The high level option is intended for studio work where long cable runs are the norm. So this limitation is of no real consequence for the audiophile.

The digital inputs on the MA3 each support up to 192kHz/24-bit or DSD. The USB-Audio input goes up to 2xDSD (via DoP), DXD (352 / 384kHz) and MQA so these specs match the DV2 exactly. The MA3 adds wired network audio, but no internal wireless connectivity.

I haven’t used the NS1 streamer but I understand the guts of the NS1 are included in the MA3 so the functionality and performance of the streaming engine should be the same. The MA3 has a very good streaming app, the industry standard MControl, available for iOS and Android. The app integrates Deezer, vTuner Internet Radio, TIDAL, Qobuz and Spotify and can access Dropbox, OneDrive and iCloud Drive, as well as local storage on your smart phone, on a Music Server such as the exaSound Delta Server that I use, or a FAT32 or NTFS formatted USB thumb drive.

You can adjust the volume (0 – 100) on the MA3 using its large volume control or from the very nice remote control. The MControl app can control the MA3’s volume as well in coarse or broad increments (all three sync together) and can mute or pause play. Since the MA3 is also a Roon Endpoint. I prefer to use Qobuz under the Roon app for the extra information on each album and access to different versions of the same tracks, so I spend more time listening to Qobuz and my own music files from to the exaSound Delta Server through the USB-Audio connection, fed by the excellent Nordost Tyr 2.0 USB cable which I recently added to my system.

The MA3 was set as the source feeding into a Soulution 511 Stereo Power Amp which in turn drove YG Hailey 2.2 speakers. Power cables, balanced interconnects and speaker cables are all Nordost Valhalla 2. That’s a very neutral and highly resolving setup which should reveal any inadequacies in the digital front end. The MA3 replaced my reference EMM Labs DV2.

I listened extensively to the same tracks, at the same resolution, played he from a USB thumb drive, from Qobuz on the MControl app, from the Delta Server streaming Qobuz or from its library. Damned if I could tell any difference. You can put that down to the MFAST input circuitry on the MA3 which is equally comfortable eliminating jitter from all sources. So I won’t attempt to describe the sound by input.

The MA3 has similar sound character to other EMM Labs components over the years, a sound that has improved dramatically over time, but which shares very particular traits:

· Effortless at all volume levels

On equipment of this caliber, there is no need to report how it sounds on different types of music. If you get the timing, phase behavior, distortion, dynamics, resolution and frequency response right, any music you throw at it will sound close to the potential in the recording. The MA3 does not play favorites. It is equally at home in hard rock, folk, world music, jazz and classical from the smallest to the largest scale. I simply couldn’t catch it out, even with difficult recordings such as Chopin’s Funeral March Sonata, Haydn Quartets played on original instruments by the QuatuorMosaïques, Leonard Cohen’s final album or Louis Armstrong Hot Five and Hot Seven, nor on music of great complexity like Mahler’s Resurrection Symphony. The MA3 maintains its clear head under any storm.

I had to listen very carefully to differentiate between the sound through the MA3 and through the DV2, after careful level matching. It is obvious that there are differences, but it’s not so obvious at first which is the more truthful. I found three areas where the DV2 excelled over the MA3. First is in the soundstage extremes a little wider and considerably deeper, more three dimensional on the DV2. This makes the DV2 sound more realistic and relaxing over time. Second the DV2 maintains its performance into the frequency extremes, while the MA3 is slightly forward in the midrange, which some may prefer. Finally, the start and stop reflexes on the DV2 are faster, leading to a more dynamic sound on some material.

Let me add that these differences are small, very much smaller than the differences between the reference DV2 and every other DAC I’ve had in my system over the years. It amazes me that the MA3 comes as close as it does sonically to the DV2. I kept this unit a long time to make sure of my findings. At first there was no contest but over the long period of run in, around 300 hours, the MA3 improved greatly until it stands now only a fraction behind.

I asked Shahin Al Rashid where the corners have been cut to bring the price down from $34,500 for the DV2 DAC + NS1 Streamer to $9500 for the MA3. We’ve covered the small set of features missing in the MA3, none of which should affect audiophiles.

1. The bigger aluminum chassis of the DV2 (38 lbs.) provides a much lower operating temperature and eliminates any heat gradient. This I can confirm. The DV2 never gets more than a little warm, with that warmth steady across the top and sides of the unit. The MA3 with its smaller all metal chassis (16.4 lbs.) runs significantly hotter, and this is felt especially at particularly spots. There is a temperature gradient running from the power supply to the output section. A lower more uniform temperature is best for ultimate performance, for example reducing disparities between the 2 channels. It also improves the life expectancy of the components inside the box, leading to greater reliability.

3. Similar 1% tolerance capacitors are used in both units, but in the DV2 they are tested in house and hand matched to within 0.1%.

4. Each channel is truly balanced in the DV2 with two identical output sections running positive and negative polarities of the balanced outputs, with 4 regulators per channel on the output drivers .

5. Aerospace grade ceramic circuit boards are used in the DV2 .

6. The DV2’s analog section pushes further into Class A, using a higher bias .

I understand that $9500 is still a great deal of money, and out of reach for most listeners. But it still represents amazing value among high end digital components. If you don’t need analog inputs (I don’t) it can save you the price of a great preamp and associated cables, since you just connect it directly to your power amp.

Since EMM Labs and Meitner Audio roll their own DACs, implementing them in firmware on powerful programmable hardware, from time to time you may get firmware updates which bring significant improvements to the sound or the functionality. This is a major plus, common to just a few brands.

The MA3 carries my warmest possible recommendation. It makes as strong a case for digital audio as anything out there.

Given his skill and his vast experience in high-end audio, we aren’t surprised that Phil has pinpointed the primary reason we have made the MA3 – to make our evergreen Meitner sound qualities available to aficionados who appreciate an easy and uncomplicated way to listen to music. Music of any and all kinds, delivered in all its forms, streaming or otherwise, played back with an obsessive purist’s (Ed Meitner’s) uncompromising audio standards.