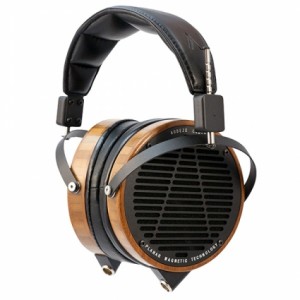 I feel lucky. Lucky in that I can point-out, quite singularly, the pair of headphones that sealed my migration over to high end personal audio: the original Audeze LCD-3. It’s an awesome feeling as I’ve watched a friend – Alex Rossen, CEO of Audeze – and his team continue to develop and improve their product line over the years with hard work and dedication. And regardless of my relationship with the company, Audeze are in-fact my favorite headphones (and if that is a problem for you – I can understand). But all I can do is give you my word: If something else comes along that connects me to the music as deeply as Audeze does – or deeper – I’ll evangelize for those cans all day long. That said: If I didn’t like a product from Audeze, I would definitely make it known. For me, right now, when I want to have the ultimate listening experience – spiritually, musically, sonically – I reach for my Audeze at home. And this year, I’ve been reaching for the LCD-2 with Fazor upgrade more than any other headphone.

I enjoyed the original LCD-2, but it didn’t hit me like so many on Head-Fi.org (I believe the LCD-2 has the longest running thread there – amazing). Although, when I got to live with the LCD-2 for an extended time, I ended up enjoying all sorts of music through them. The LCD-2 had this luscious midrange, deep, drivy low-end, and wonderfully dimensional highs that felt and sounded natural. There wasn’t a hint of brightness to me, especially when the right configuration of gear was drivin’ them, especially when I found the right kinda’ synergy. The LCD-2 captured and reproduced the whole audio spectrum beautifully, and, pardon my French: Fuckin’ hell, they didn’t sound like Hi-fi, the sound of the LCD-2 flowed like music. However difficult to beat, the Audeze LCD-3 was on a whole other level when it came to overall fidelity – spatial placement, imaging, soundstage, almost everything was improved. There was still something, a glitter of magic perhaps, about the seductive midrange of the LCD-2 that always grabbed my attention and focus (not an easy feat, especially in this never-ending, never un-plugged world of non-stop media streams). I can’t peg it from a technical standpoint, but man: The midrange! That’s where most of music lives after all and it was something I wished I could pancake into my LCD-3s.

Basically, before the new Fazor technology, I always preferred the LCD-3 emotively, and I also found its dynamics, three-dimensional soundstaging and insane bass response completely gripping (have I said that already?). They were capable of transporting me to another time and space where I’m seriously deep in listening mode. With the new LCD-2 with Fazor, I feel like I’m getting all that and more. It’s like having an original LCD-3, with that magical midrange I spoke of, along with the incredible spatial qualities. Right now as I rock Recondite’s “Garbo” off their new record Iffy on my LCD-2 w/ Fazor: When I close my eyes I feel like I’m back at Club Twilo in the early ‘90’s. The hovering synth lines, movin’ like audible waves over a pond, slow and steady. There’s this constant low-end hum, silky and textural, that flows forward and then to the back of the soundstage. By the time the kick-drum drops I’m completely lost init’. The music, while repetitive and somewhat slow moving, grabs me by the chest. Iffy is a new record (I reviewed it for Positive Feedback HERE) that I can’t turn off if I hear it on a good system. It’s a fantastic sonic voyage, and the LCD-2 w/ Fazor just provides a smooth and engaging ride…

Associated Equipment while listening to Recondite:

Last year, with the introduction of Audezes Fazor technology into their new LCD-X and LCD-XC (their closed-back planar magnetic model), I just knew they were going to apply the Fazor technology into the two headphones that built the company: The LCD-2 & LCD-3. And I was drooling like a sonic junkie for some time, aching for that audible fix. I’ve been living with the new LCD-2 and LCD-3 w/ Fazor for over a year now. Next to my LCD-XC (again – the Audeze closed-backs) I listen to my LCD-2 w/ Fazor more than any other headphone in my vast (eh, lets face it: downright gluttonous) collection. So, naturally, when I considered outstanding components for Product of the Year here at Guru, I thought about the gear I used the most – personally and professionally. Firstly, the headphones I choose, more than any others, for my listening sessions. And when my only objective is to get high on music, the choice happens to be the LCD-2 w/ Fazor. I use the LCD-XCs (Audezes closed-back) often as well. However musically pleasing they may be, and they are – they are usually chosen for me, by my wife Alexandra! “Put on your closed-backs, it’s starting to drive me mad”. But, in her defense – my second headphone listening station is in our front room, which acts a living room, with our two-channel system, and her art/jewelry desk up there as well. It’s basically the common area, so obviously not a great spot for open-back headphone sessions.

However, that desk is just a small arm of the main Sonic Satori Personal Audio Lab – my pride and joy, my office and playroom. It’s been in that room where I’ve had listening sessions with my Audeze LCD-2 w/ Fazor that have left an indelible mark on my wondrous memories when it comes to experiencing music, live or reproduced. That may sound overblown to you, but it’s no bullshit. The Audeze LCD-2 w/ Fazor, when accompanied with a proper system (from power to headphone) delivers the emotive charge of my music and the sonics that draw me in, deeply. So deeply in fact, I’ve had so many all-night listening sessions with the LCD-2Fs (Fazor). My wifey calls them my “insomniac cans”!

Yet the headphones aren’t putting me to sleep; quite the contrary: I try to stay up and listen to music with em’ until I’m literally face-planting into my MacBook Pro as the sun warms the Sonic Satori Personal Audio Lab. That’s a serious challenge, trying to describe the sensation of experiencing music that touches your soul so deeply you just don’t want it to end. The sound somehow seems to connect precisely with your mood, and the song ends up owning you emotionally. You can’t help but cry or get pissed, elated, whatever it’s inspiring in you. That’s a big part of the music for me. I sincerely hope you feel it that deeply too. Right now for example, as I sit here and listen to Sam Cooke, “A Change is Gonna Come”, off Sam Cooke Portrait of a Legend 1951-1964 via my Audeze LCD-2 w/ Fazor, I can’t help but think of things that happened early in my life, things beyond my control that left those scars that don’t heal. The song is so hauntingly gorgeous, I could connect emotionally to that song through an awful-tone (a.k.a Auratone).

However, when I’m listening to that song through my LCD-2s and a decent system, it becomes an almost visual experience. The music has more life, more space, impact, everything. I feel a part of the whole. That’s another new sensation from my days in two-channel in-room systems. Top-of-their-class headphones like Audeze don’t merely paint a small musical image inside your head. The LCD-2 w/ Fazor actually throws a three-dimensional soundstage that’s almost holographic. It’s difficult to imagine, that I realize. So imagine trying to explain a pair of in-ear-monitors that do that too! Technology is a crazy thing.

Audeze introduced Fazor in order to broaden the sonic experience of Audeze headphones. Basically, Fazor is like a sort-of wave-guide (no, not in the Bose sense) for the frequencies in relation to the magnets in the structure of the driver. The best technical breakdown of the Fazor technology – accompanied by a great visual layout – was written by Tyll Hertsens over at Inner Fidelity. Tyll’s a measurement King, so you can check out his Fazor breakdown right HERE. Now, straight up: I could care less what Fazor actually does. I heard a difference in the soundstage immediately when I tried a pair of Audeze with it installed, but it’s the sound of music that I care about the most. Since Fazor has in fact given the LCD-2 a larger image, I’ve also noticed a significant upgrade in detail retrieval compared to the original. I’m not sure if Fazor alone is responsible for this edge in performance, but it’s splendid. A great example is Damien Rices’ “9 Crimes” off 9. This is one of my favorite stripped-down singer/songwriter tunes. Despite it’s bare-bones musical elements, the sound is actually huge. Microphone placement is really close to everything and they happened to properly capture the space itself. Within the second verse I could hear this faint echo that I never heard before. The piano was also arranged spatially in a way that made it sound bigger, like an actual piano. And the vocals were so powerful in their nuances. Every time I listen to this track I hit repeat, especially since I started using the LCD-2 w/ Fazor to hear it! I’m actually rockin’ my pair right now with the PS Audio Sprout! There’s a wonderfully fluid synergy between the two. That’s another characteristic of the LCD-2 I enjoy: It plays well with a wide range of gear.

When I listen via my Audeze LCD-2 w/ Fazor and a great rig (like the associated gear above) I honestly feel like I’m listening to, for example, the ground-breaking Genesis One Loudspeaker system designed by Arnie Nudell (also a big fan of Audeze) But you know what? That speaker system had four eight-foot towers and cost around $200k! Hmmmm… Sounds insane. Comparing listening to planar magnetic headphones, an amp (tube or solid-state) and source vs. a giant audiophiles wet dream of a sound-system! Hey, the truth is, some people in the audiophile hobby seem more concerned with sound than getting closer to the music. Hence the “Audiophile-Approved” playlist that hasn’t changed at trade shows for decades. But I love music first and foremost – so whatever sound system tears away more crap between me and the transducer: I’m on it! After all, as I’ve stated in previous articles: The ultimate goal for me with regard to my music and playback systems are to break down as much bullshit between me and the signal as possible. With cans, and, especially with my trusty Audeze – I can remove the room acoustics factor from my list of concerns when it comes to critical listening. That’s huge.

So, with all that said: My migration to high end personal audio has been the greatest experience in my twenty-plus years in Hi-fi! So this year I’m giving the Audeze LCD-2 w/ Fazor its well-deserved Product of the Year Award. I can’t stress it enough: The LCD-2 (or 3) does not actually sound like “headphones” to me at all. When I’m rockin’ a pair of Audezes, it sounds like a terrific two-channel system. And I bet I can get louder than you in the next apartment a 3AM. Bottom line: The LCD-2 w/ Fazor is wickedly fast, transparent, musically rich, and seductive. If I start an album while listening to the LCD-2s, I never walk away before the album is finished. Maybe that’s the best compliment I can give any headphone.