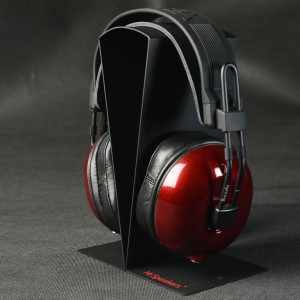 When I reviewed the Mad Dog headphones last year I had wondered what would be next from Dan Clark’s bag of mystery (and mystique) and then along came the world’s first 3D printed headphone. The Alpha Dog is a substantial step-up over the Mad Dog previously reviewed. The closed 3D printed cup painted with a very sexy burgundy metallic automotive finish is also now available in black. The burgundy cup looks like a fine wine. The look of the headphone is very attractive and will appeal to all headphone users.

The headphone can be purchased directly from Mr. Speakers’ website for a very affordable $599.99. Dan packages the Alpha Dog in a nice box and it includes a stand and a stock single ended cable. There is also a balanced cable available as an option. The Wywires custom cable was used for my audition of the Alpha Dog and is a substantial upgrade over the stock cable. It has a presentation with more air and separation between instruments. The WyWires cable provided cleaner and more vivid window that seemed to make the music flow more easily.

Mr. Speakers, as a company, has been exploding with growth. Dan Clark had made a major investment in purchasing the 3D printing machines to manufacture the alpha dog cups. Deciding that the quality control was important to making sure his quality standards were always met, Dan no longer outsources the painting of the cups. Manufacturing and modifications are all done in San Diego, California. Although the Alpha Dogs had been backordered since introduction, Dan has increased capacity to meet demand and they are now in stock.

Dan has done an outstanding job of attracting both younger and older music lovers to his headphone design due to the amazing sound and extraordinary value – the best in the business The headphone is built and hand-tuned by Dan himself.

After reviewing the Mad Dog upon receipt of the Alpha Dog I was wondering if the sound could be improved upon. After all there is only so much that could be done with a driver; could it still be possible to extract more from the design? That was the question that kept going through my mind. The Mad Dog had sounded so good that I never imagined the design could be further improved. Knowing Dan, I should never have asked myself that question.

As a speaker designer his past achievements were always stellar. His talent is undeniable and his creative mind figured out a way to make some improvements, or should I say a major leap and jump in performance over the already outstanding Mad Dog (still in the lineup) design.

The very first thing I noticed when I first put the Alpha Dog on was a major improvement with the soundstage. The sound of instruments had more air and much bigger separation, bass was deeper, and I could hear much better focus within the recordings thanks to the new 3-D printed cups. Treble had more extension – drum cymbals were no longer splashy, and I could hear that shimmer of the cymbals that I crave when I listen to live recordings.

Listening to a wide variety of different types of jazz, rock, dance, country, and classical selections gave me a good choice of music to evaluate all aspects of the Alpha Dog.

Morning Phase is my favorite Beck album. The new release has tracks that transport me into another level of musicality. I got lost in the title track and just melted away with the Alpha Dog. I had completely forgot about the gear. Utilizing the Woo WA5 and Heed Canolot for most of my listening sessions, I was completely consumed by Beck ‘s performance. No matter which amplifier I used, it made little difference. The Alpha Dog’s midrange and musicality let me just focus on the tunes. I was completely involved with the music and the performance.

Daft Punk’s “Get Lucky” made me want to get up and move the legs. The Alpha Dog did not disappoint me with its reproduction of this outstanding dance album. I could feel the intensity in the track and emotional involvement. The album won a Grammy for Album of the Year for good reason. The music is energetic and so alive. It makes people get into the music. The Alpha Dog made me feel involved with the music and I never felt like I was missing anything in the performance.

Arcade Fire’s conceptual album Reflektor is a super recording. The Montreal based veteran band released a top shelf rock album. The Alpha Dog on “Joan of Arc“ again delivered the speed to let me feel the intensity of the performance. The song closes out the first disc and the Alpha Dog’s performance made me want to listen to the entire performance of this terrific band. The music never was boring. The Dog brought out the best in the performance and made me want to listen to the rest of the album without hesitation.

Alison Krauss’ vocals are always a treat. One of my favorite albums is Forget About It. The track ”Ghost in the House” keeps me connected with what Alison can do as a vocalist. The Alpha Dog allowed her vocals and articulation to be perfect, allowing me to hear an abundance of inner-detail. Closing my eyes I felt very much as if she was performing before me live. The sensational clarity, and deep and spiritual tone of her voice always was evident with the Alpha Dog. The midrange performance is up there with the very best planar headphones on the market. “Dreaming My Dreams With You,” her closing track, made me feel as if she was singing directly to me. It seemed as if I was in the concert hall listening to her (recently seen her) in the hall sitting in the front seat in the center and closer to the stage.

Keith Johnson ‘s magnificent Reference Recording of “Fanfare for the Common Man” on the Copland CD is one my favorite tracks to evaluate how fast any transducer really is. The dynamic range on this disc is a torture test for most speakers and headphones to reproduce. Using the Wywires balanced cable with the Woo WA5 showcased what the Alpha Dog was capable of doing as a transducer.

It was able to keep up with the speed of the orchestra. The buildup at the end of the track has made many speakers and headphones fail and fall apart. It nailed the performance, and cranked up at high levels I could not only hear the massive timpani whacks, but my brain was rattled with the force coming out of these headphones – the performance was spectacular. The Dog was howling and barking a mighty big bite.

Just when I thought I had heard the best of what the Dog could do I got a call from Dan and he told me to ship it back for another tuning. I argued with him that I was perfectly happy with the sound that was coming out but he insisted I send them back. I asked him what the new tuning was going to be and he said it was a doggie treat. Figuring he lost his mind, I boxed them up and sent them back to him. The one thing I learned from all of this was to never question Dan when he wants to tune anything.

He made some minor modifications and added felt inside the drivers and also gave me some custom felt material to insert into the pads. The soundstage was wider and deeper, and the treble was now fully developed, better defined, and much less tinny. Performance had risen once more to a higher level.

Dan Clark has put his heart and his soul to create one of the most competitive planar designs on the market. His unwavering commitment to obtaining the very best performance for his customers with this design is unquestionable.

The countless hours and work he has put into this design makes the world’s first 3D printed headphone a major achievement. At $599.99 this is the best value in high-end headphone designs today. The Alpha Dog performance is musical and performs way above its meager asking price.

It price is a steal for the level of performance that you get. Keep in mind if Dan sends you an email or announces another upgrade for them, just send them in. The man has always delivered more than he asks for in return. Dan Clark always puts everything he has into satisfying his customers, and I for one cannot wait to see what else is in store for the headphone community from this creative genius (or borderline insane) designer.

Mr. Speakers delivers a huge winner with the Alpha Dog. Based on performance and price this is a no brainer and an easy thumbs up recommendation.