MrSpeakers ETHER2 Open Back Orthodynamic Headphones – How High is Up 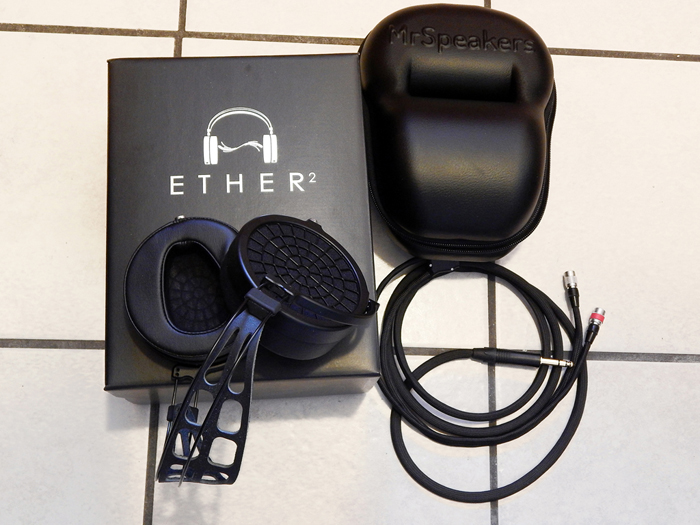 Since MrSpeakers first introduced the ETHER headphones, Dan Clark has been on a path of constant improvement, introducing new products every few months. First there was the ETHERs, then the ETHER Cs, then the ETHER Flows & ETHER C Flows, then the AEON Flow Closed, then the AEON Flow Open, then the epic VOCE setting a new standard for electrostatic headphones, then just recently the 1.1 upgrade for the ETHER Flows & ETHER C Flows and now the ETHER2 Open Back Orthodynamic Headphones. This is not simply an upgrade to the ETHERs, but a completely new headphone sharing elements of both the AEON and the VOCE as well as the ETHER and offering performance in a planar magnetic headphone approaching that of the VOCE electrostatic headphone.

In appearance, the ETHER2 is most similar to the VOCE except with the classic MrSpeakers cable terminal rather than the electrostatic cable connector and the finish is black. While the ETHER Flow is not a heavy headphone, it is not exactly light either, the ETHER2 changes all that coming in at an extremely light 290 grams. That being said, none of the famous MrSpeakers high-quality construction has been left out or compromised. The earcups and pivots are all metal with MrSpeakers signature Nitinol “Memory Metal” headband and a special lightened leather headstrap and a carbon fiber driver baffle. For increased comfort, the ETHER2 employs an ergonomic synthetic protein earpad.

The real story is the new motor which was designed around their TrueFlow technology to realize major improvements in linearity, dynamics, and detail. On top of that, they designed an all-new diaphragm that reduces the aluminum trace weight by 70%.

And finally, to top things off, MrSpeakers has replaced their original “DUM” cable with a new “VIVO” cable which while larger in diameter is lighter and more flexible as well as less microphonic.

As to packaging, the ETHER2 came in an attractive black box and included their familiar hardshell caring case.

I began my tests of the MrSpeakers ETHER2 with a quick comparison to the ETHER C Flows and the AEON Flow Opens. The ETHER2 are a little more efficient than the ETHER C Flows but not on a par with the AEON Flows which puts them in the ballpark of the ETHER Flows and the AEON Flow Closed which means they can be driven easily by most DAPs and Desktop Systems and though it’s not likely that one would choose these for use with a phone or cheap DAP anyway, the sound of Suzanne Vega singing “Luka” (24/48kHz) through my Samsung Galaxy J3 was warm and pleasing if not overly loud.

As one would expect the tonal balance of the ETHER2 is closer to the ETHER Flow as opposed to the ETHER C Flow falling out on the warm richer side while still exhibiting a very natural timbre. Where the ETHER2 excels is reproducing the micro detail that fills in the soundstage.

To put that micro-detail through its paces I selected “The Firebird Suite” as performed by Eiji Oue and the Minnesota Orchestra (Stravinsky – DSD). The introductory bass and cellos had great weight building up as more strings entered the fray, punctuated by the beefy low brass as it phased in resonating in a great space with subtle rear wall reflections. The breathy woodwind/horn counterpoint leading into the airy brush of strings and the tinkering of the xylophone all adding to a sense of vastness. The harp, the pianoforte, the flutes, the piccolo, the oboes, the English horn, the clarinets, the bassoons as well as the brass and strings all identifiable in their own particular space, producing a realistic and natural three-dimensional soundscape. The dynamics of the crescendos with the rolls of the tympanis and the crash of the bass drum and cymbals were spectacular, lending a truly live presence to the performance.

The sense of space was exemplified while playing the solo piano of Liz Story for “Wedding Rain” (Solid Colors – 16/44.1kHz), the piano rich and warm with a delicacy and crispness indicative of a Steinway. Once again there was not only width but depth to the soundstage adding veracity to the illusion that you were sitting in a great hall listening to a recital.

Despite the heavy bass line, you could easily hear the air of the sound booth taking in “Sunny Came Home” by Shawn Colvin (A Few Small Repairs – 16/44.1kHz). The attack and decay of the instruments palpable, with a crisp mandolin and textured vocals transporting you to the studio.

“Take Five” is one of Jazz’s cornerstones and the small club vibe of  Arne Domnérus, Bengt Hallberg, Lars Erstrand, Georg Riedel, and Egil Johansen’s Jazz at the Pawnshop (16/44.1kHz) interpretation of the classic was fully realized by the ETHER2 with a deep musicality and intimacy that speaks volumes about the marvelous acoustics of the venue.

Switching to the QP2R and cueing up The Rolling Stones’ “As Tears Go By” I was once again blown away by the width and depth of the soundstage produced by the ETHER2. The handling of sibilants was especially impressive, no spit or rasp, but fully textured as if a mic and amplifier weren’t involved at all while capturing all of the raw emotion.

My last track was actually my first track as I used it to compare the different MrSpeakers headphones using the QP2R as well as the different cables, but chose to revisit it at the end when talking about the QP2R performance, and that would be “And You And I — I. Cord of Life, II. Eclipse, III. The Preacher the Teacher, IV. Apocalypse” from Yes’ Close to the Edge (DSD). I was floored by the huge soundstage, the lack of sibilant hiss during certain vocal passages and the deep throaty bass as well as the clarity and detail.

I guess my tests wouldn’t be complete without some word on the new VIVO cable, it is definitely less microphonic and I believe there was a slight improvement in bass extension and resolution.

Once again MrSpeakers has hit it out of the park with the ETHER2 Planar Magnetic Headphones. Well deserving of the name flagship this top of the line headphone offers incremental improvement over all previous planar models while maintaining the natural tonality and musicality that MrSpeakers is known for. When it comes to music reproduction the ETHER2 is a one size fits all headphone. That is to say that it has the deep bass extension and dynamics for dance music and rock, the detail, soundstage, transparency and clarity for classical, the warm musicality for vocal music and the speed and tight bottom end for jazz. If you are looking for a reference quality headphone, there is no need to spend three or four thousand dollars, this is the one. I would happily include the MrSpeakers ETHER2 among to the top five or so headphones I have heard and they currently rank number two among my favorites right behind the VOCE.

Frequency Response: Yes* *The industry has no standards for measuring or publishing results and many published specs wildly overstate the headphone’s potential. We prefer not to play the “spec game” for this reason.