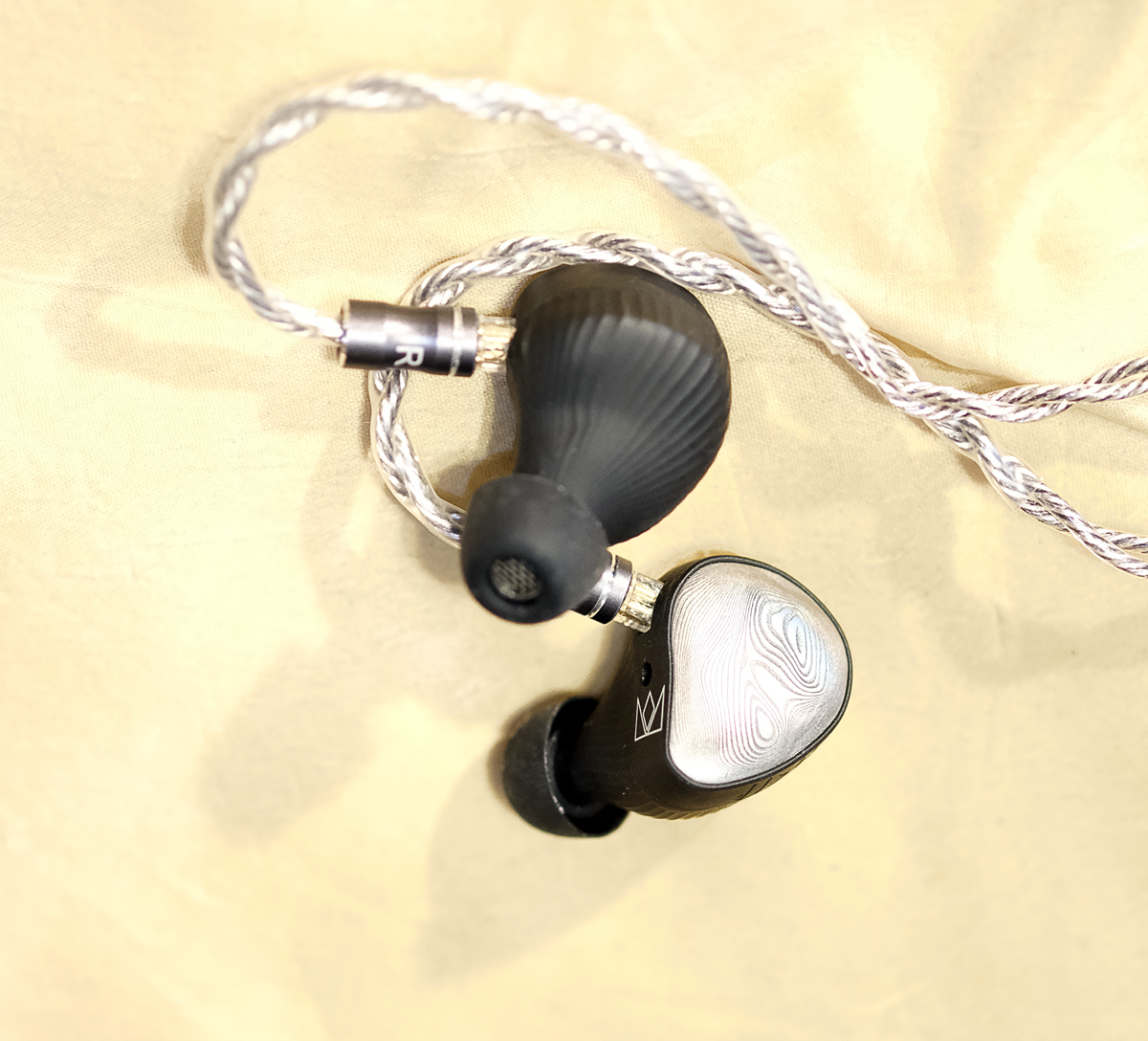 Attendees of CanJam SoCal 2022 have something very special and exciting to look forward to; the launch of Noble Audio’s latest creation the Noble Audio Viking Ragnar. Named for the Viking Hero Ragnar Lodbrok who slew a giant snake to win his wife, the Viking Ragnar is a bit of a giant slayer itself.

The Wizard (Audiologist John Moulton, founder of Noble Audio as well as the designer behind all Noble products) has paired up with famous Master Jeweler Chris Ploof to design the aesthetics of Noble’s newest flagship In-Ear Monitor kicking everything up a notch to ascend to a higher level in artistic quality. Of course, the aural design and sonic profile are all the Wizard. The Viking Ragnar is a reference IEM designed not only to surpass all previous IEMs but to set a standard of sound for Headphones in general.

Like all Noble IEMs that I have received the Ragnar came in a Pelican-style case albeit much larger than I was used to. Inside the case with the Ragnar was a leather hardshell case along with the usual velvet bag, straps, cleaning brush, and assortment of tips (three styles, silicone, white foam, and black foam in three sizes each). The Ragnar itself was stunningly elegant in appearance with black all-aluminum bodies and watered stainless steel Damascus faceplates. The cable is an upgraded braided Graphene and Silver cable with a Pentaconn High Grade OFC 4.4mm TRRRS connector.

(As a side note; I recommend that anyone who hasn’t visited the Noble website lately do so now as they have put up a lovely video showing the Wizard at work.)

I burned in the Noble Audio Viking Ragnar with the iBasso DX320 Reference DAP so that seemed the best place to start my listening tests. Opening up with Sonny Boy Williamson’s “The Sky Is Crying” from “Keep It To Ourselves” (DSD) it was like being in the room with him with the full ambiance of a live performance up close and personal in a large hall. The guitar crisp and natural sounding, as well as, the harmonica. If musicality is defined as not sounding like a recording at all, but actual performers in the room, then the musicality was out of this world.

“Can-utility And The Coastliners” (“Foxtrot” – Genesis – DSD) was unlike I had ever heard it before. The shimmer of the cymbal strikes and the tap of the sticks were so realistic as to stand out in a way never before noticed. Everything was so much larger and detailed. The bass was tight, deep, and resonant but not over-pronounced. For the first time, it was clear there were two acoustic guitars playing in concert.

Normally I would wait until I was listening to the desktop unit to play “The Firebird Suite” (“Stravinsky: The Firebird; Borodin: Music from Prince Igor” – Robert Shaw and the Atlanta Symphony Orchestra and Chorus – 24-bit/96kHz vinyl rip) but the sound was so good I had to see how it fared. Again the instruments were individualized and so realistic sounding that I was just floored. The extreme dynamics and clarity, along with the as-large-as-life presentation made the experience unique. Once again the musicality was so intense without glossing over the details, just each instrument present without distortion in its individual space. Airy doesn’t begin to describe the naturalness and realism of the soundstage.

Switching to my Questyle CMA400i Current Mode DAC/Amplifier which is my reference amp for IEMs I decided to give David Chesky’s Headphone Mix recordings from “The Audiophile Society Sampler” (a free download from Chesky Records) a try. “Graffiti Jazz No. 3 (headphone mix)” (David Chesky – 24-bit/96kHz) had some very interesting subsonic bass and a very ethereal mix. “Graffiti Jazz No. 3 (speaker mix)” (24-bit/192kHz) had a more in-the-room natural soundstage, and more texture to the bass, but was definitely flatter sounding. Both of which were of little help in evaluating headphones, I was hoping for more of a straight binaural recording but recording engineers must engineer. I will say the sound was spectacular regardless.

Opting for something a little mellower in the way of Jazz I put on Louis Armstrong performing “What A Wonderful World (Single Version)” (24-bit/192kHz). Like the classical piece, each instrument stood out as being a unique instrument in its own space in a massive hall. The richness of Satchmo’s voice and the overall musicality made listening to this track a singular experience.

For a bit of straight rock ‘n’ roll, you can’t beat The Police and “Man In A Suitcase” (“Zenyatta Mondatta” – DSD), dynamic and stark in a vast emptiness, Stewart’s percussion had real snap and impact. The tightness of Sting’s bass, as well as, Andy’s guitar exemplified the sound that made The Police so popular.

With the opening notes of “Piano Man” (“Piano Man” – Billy Joel – DSD), you can picture yourself in a massive empty piano bar, the piano rich and full, the harmonica echoing off the distant walls. As the other instruments kick in the piano bar is transformed into a large auditorium or stadium. Despite the cacophony of sound during the crescendos you can easily delineate each of the myriad instruments, acoustic guitar, accordion, mandolin, and I believe banjo though it could be the mandolin. As above, the bass is deep and resonant without feeling boosted, and the percussion impactful and sharp. And the dynamic range caused me to turn down the volume a couple of times.

For female vocal, I chose Pink Martini performing “Que Sera, Sera (Whatever Will Be, Will Be)” (“Sympathique”). Despite the low resolution of the 16-bit/44.1kHz track the experience was musical and ethereal with the chorus of piano, vibes, xylophone, and assorted bells. China Forbes’ vocal was clear as crystal and as lovely as I have heard it.

Since I got a good seal out of the box with the silicone tips, I didn’t go through my usual ritual of testing the different tips, but since you often get a different sound from foam tips I figured a sound check was warranted. Starting with the white foam tips I chose “Mistral Wind” from Heart’s “Dog & Butterfly” (24-bit/192kHz). First time through I had the volume too high as I had to turn it down for the crescendos, so on the second pass, Nancy’s opening guitar was set about ten feet away in a vast hall as was Ann’s vocal. The bass broke in deep and resonant along with the shimmer of the ethereal cymbals. When the electrics jumped in and the volume kicked up about 10 dB the dynamics were epic with the band all together at about the same distance in a huge soundstage. Switching to the black foam tips which are a bit sticky and have a larger bore, there was a definite uptick in the warmth of the bottom end bringing the bass and drums slightly forward making for a more exciting live performance presentation. Returning to the silicone tips which also have a large bore, but put the nozzle closer to your ear canal, the soundstage was more intimate but wider with more detail and tighter on the bottom end, albeit a little louder also. I will say, oddly the black foam were the most comfortable, but this may be due to the barrel being slightly larger than my ear canal hence the foam tips compress more since they extend beyond the barrel. Regardless, I preferred the sound of the silicone tips and am more than willing to endure a slight discomfort in the name of the magnificent sound being produced.

For a little under eight years, I have contended that the Noble Katana is one of the finest-sounding headphones made only outdone by the best of the over-the-ear Electrostatic headphones in airiness and detail, and the best over-the-ear Planar headphones in terms of bottom-end. Now, Noble Audio have outdone themselves with the Viking Ragnar. I can only think of a couple of price-no-object over-the-ear headphones that can stand up to the Ragnar sonically, in terms of speed, tonal balance, dynamic range, musicality, and soundstage, and none that surpass it. To my ears, it is simply the best IEM available, and among the very finest headphones period. And for those who prefer a little thump in their bottom end, there are the black foam eartips.

To be clear, this is not the kind of musicality that honeys over detail and makes bad-sounding equipment and low-resolution files more palatable, though admittedly they sounded great regardless of the gear involved or the music listened to, but the kind of musicality that comes with extreme clarity and undistorted presentation. Ironically, during my recent Dan Clark Audio EXPANSE review, I stated that I would be very surprised if I heard anything soon that I enjoyed as much, color me surprised. I can only offer my highest praise for this product and I feel privileged to have had the opportunity to audition it. Well done Noble, the Wizard truly earned his moniker with this one.