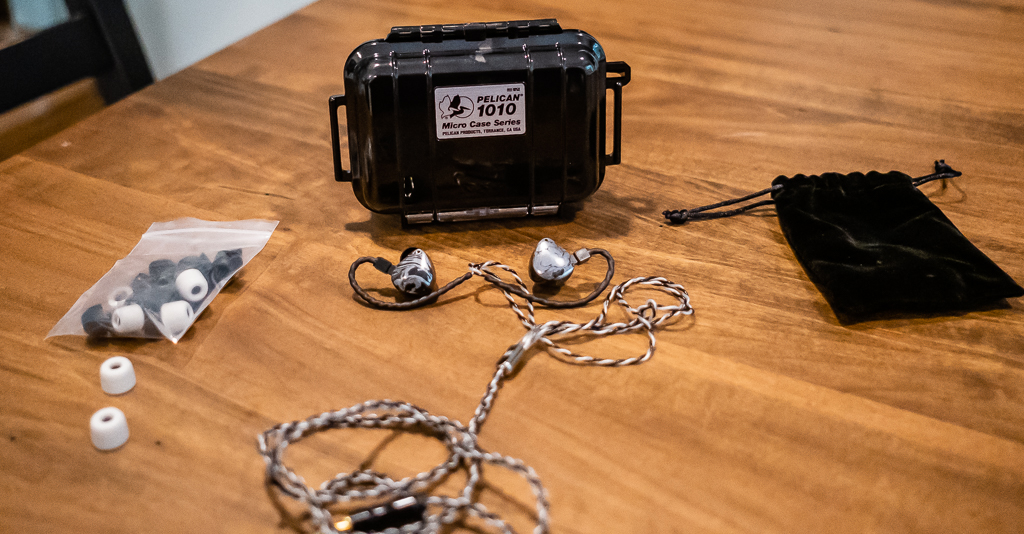 The Wiz has been busy creating new universal and custom designs using hybrid technology. Dr. John Moulton is well known in the personal audio community for creating outstanding designs with artful flair; John is an audiologist by trade and spends most of his time working with his brother Jim Moulton, an attorney by trade, who is the marketing arm and partner for Noble Audio. Jim is based in Texas and has been doing all the personal audio shows showing the new designs that the Wiz has been creating.

I was introduced to the new flagship KHAN at Axpona and after spending some time with the universal design I was excited with the sound I was hearing and arranged for a review sample for me to evaluate and write a detailed review for Guru.

The $2399 universal KHAN employs a 6 driver tri-level hybrid technology and uses four balanced armatures with one 10MM dynamic driver and 1 10mm piezoelectric driver. The design works well with smartphones and includes a Pelican 1010 carrying case. The braided cable design includes a Noble Lightning adapter for use with iPhone’s.

The KHAN is hand-assembled and all drivers are matched to achieve the ultimate listening experience.  The cord uses a 2 pin configuration and is detachable for people who would like to use other brand aftermarket cables.

The KHAN is also available in a custom design for listeners who want to get the best fit for their individual listening needs. The universals are currently on a 2-3 week delivery schedule.

The KHAN is designed to work with any portable listening device whether it is an iPad, smartphone or digital player. The adaptors allow for use on a desktop headphone amplifier as well.   The KHAN design work was created by the Wiz and is very attractive.

When I received the KHAN review sample I was anxious to get tips in and start listening. Universal IEM’s can at times present challenges for me with fit, but with the supplied Comply medium tip I was able to get a terrific seal and was comfortable.

Once I had the tip installed I used a ¼ adapter and plugged it into the Auris Nirvana and set the input selector to 32 ohms;  the KHAN was an excellent match using this full range reference tube amplifier.

The KHAN was quiet and musical right out of the gate, many IEM’s that are poorly designed can sound noisy when used with home amplification. The KHAN’s performance was exceptionally quiet and sounded musical.

Stevie Wonder’s masterful live performance of “Living in the City” has soaring dynamics and at times are explosive with the grunting deep bass lines. The KHAN’s dynamic range on this track showcased a textured and deep bass. Tight and controlled, the drum kit and bass was exciting to listen to and never missed a beat.

Stevie’s vocal was crystal clear and the soundstage was layered. While listening to the cymbals, there was air and space between the high hats and made the tune exciting and created a live experience.

The drum cymbals were never splashy and were always crystal clear and shimmered much like what you hear in live performances. The sensational bass kept coming to the forefront and the drivers were working in unison creating an exceptional and musical experience.

The portrayal was exceptional and omitted nothing from the performance. Even the handclaps were vivid. The KHAN was truly boogying with the beat and tonality and the performance was so involving.  WOW!!!!!!

Susan Wong’s new album “Close To You” has her exceptional vocal clear and alive on  “Vincent”. Her voice had clarity and her delivery was exceptional and captivating.  The KHAN recreated this performance masterfully.

Pavarotti’s “Nessa Dorma” is an exceptional male vocal.  The sound of the Master of Opera came alive and sounded as good as I have heard it reproduced. The clarity of his vocal was spectacular and the KHAN once again was able to deliver the sound and made the Maestro come to life.

“Madame X” is Madonna’s newly released album and the KHAN sounded amazing once again. While playing “God Control”, I could hear the dark sound of this recording with conviction. Madonna’s performance on this album is exceptional and with a lot going on in this recording, the KHAN was able to sort out the complex arrangement and deliver an exceptionally vivid and dynamic performance.

“Tuscan Train” on Springsteen’s  “Western Stars”  had Bruce’s grungy vocal showcased in this exciting new release. The sound coming from the high resolution digital 24/96hz recording streamed via Qobuz once again showcased the KHAN’s soundstage and the Boss’ vocal was alive and the musical arrangement sounded all out of my head with the KHAN, its exceptional dynamic range delivered the track and made it crisp and alive   and created a magical listening experience.

Switching to my digital reference player the Astell & Kern AK 240 loaded with 840 classic albums of all genres. The AK240 is my travel companion along with my iPad and is able to perform flawlessly on flights across the country and beyond.

Cueing up Lucinda Williams “Down Where the Spirit Meets The Bone” playing “Protection” the vocal was out of my head during her performance. The band is really cooking on this track the KHAN never missed a beat and made the sound live and delivered another masterful performance,

Keith Urban’s “Cop Car” written by Sam Hunt is an exceptional song that Urban brought to the top of the charts on the “Fuse” album.   Urban’s vocal was dynamic and exciting.  I could hear the detail of his guitar and the KHAN showcased exceptional layering of his band and the song was masterfully recreated.

John Fogerty’s exciting album “Wrote a Song for Everyone” showcased his catalog of songs including “Lodi” with the singer-songwriter doing vocals. The sound was exceptional with Fogerty’s guitar exhibiting an incredible presence and the KHAN was able to extract the entire performance with exceptional musicality. The tonality of the guitar was vivid with clarity and I never felt like I was listening to a recorded performance. The KHAN delivered big time dynamics. Tonality and detail are what I look for while listening and the KHAN’s performance was magical while playing Fogerty’s music. Listening to the entire album into the night, I was totally consumed with the music. The KHAN disappeared and the music was exceptional.

Noble describes Khan as the King who conquered Kings. The master built his armies and was able to place himself in the history books. The Noble KHAN is an exceptionally well thought out universal IEM that truly is a musical instrument in itself. The midrange delivery was exceptional and it is a top tier performer with exceptional clarity of instruments and the tight controlled bass presentation was as good as I have heard in any in-ear monitor.

Listening for hours on end with the KHAN I came to respect the musicality. The treble extension along with the flawless bass and midrange made this a magical ride and adventure into what is possible with miniature drivers. The sound was never small and created a total out of the head listening experience.

John Moulton’s exceptional design work on the design is striking, but the music it creates is beyond exceptional. As an audiologist, John knows what it is like to hear great sound and as an artist, he knows how to create products that are truly one of a kind. The thought and inspiration in developing KHAN took a lot of research and time to get the best product for a universal design.

The KHAN never sounded bright or warm. The sound was like a fine-tuned instrument, which had musicality of sound rarely heard. The pristine vocal performances combined with inner detail retrieval were remarkable.

Universal designs are preferred by many listeners because generally with a custom design as your ears change they will need to be re-shelled and that can become expensive. Universals are also easier to resell on the used market, while customs generally are difficult to sell and lose much of their resale value.

Noble exceeded my expectations with the KHAN. Never once did I miss listening to a custom while listening to the KHAN. Listeners who are looking for a reference caliber musical instrument for listening and want the best of what IEM’s can offer, the Khan will offer you exceptional musicality and that rare experience where all of the sound is balanced with a live feeling and creates a magical listening experience.

While not inexpensive, truly great pieces of art and instrumentation never are because of the research and development and the intensive hand labor that goes into the creation of the design. The KHAN is one of the rare instruments that make listening to music as good as it gets and joins the ranks as one of the best IEM’s in the world. Truly special and a must-hear for anyone looking for a magical ride and total experience. Highly Recommended.