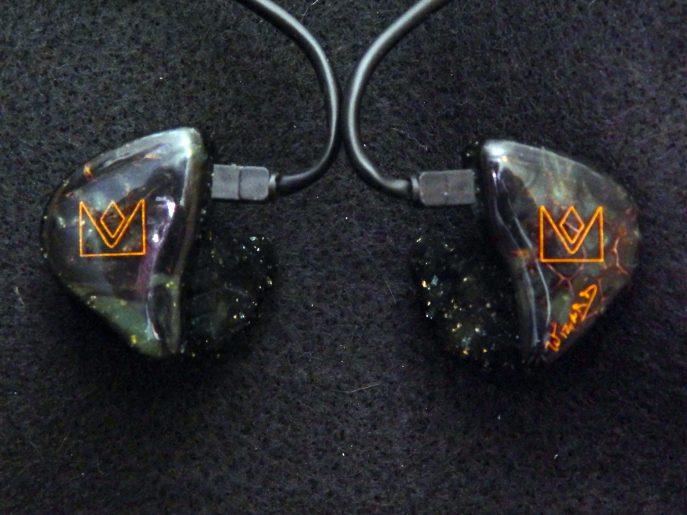 Regular readers will know that I have a bit of a problem getting a seal with universal IEMs, so when the opportunity arose to get Custom IEMs, I jumped at it.

The genius behind Noble (pronounced no-bull according to their website) is Dr. John Moulton, a.k.a. Wizard, an audiologist and audio enthusiast who decided to combine his two passions to create some of the most respected IEMs in the industry. His latest creation and new flagship product is the Katana, featuring nine proprietary balanced-armature drivers, voiced to provided extended high frequencies, “a lush mid-range, impactful low-end, and Noble’s signature coherency,” but I get ahead of myself here.

For me, this began with a visit to Brannan Mason’s office in Santa Barbara to have impressions done, which was effected by Brannan injecting a forming material into my ears while I held a bit in my teeth (after inserting stops to protect my eardrums), which set in a few minutes. All in all it was painless and quick. While in the office I able to observe some of the equipment behind the magic, a mini CNC machine and exotic materials and compounds used in the manufacture of their Prestige line of IEMs.

I came to the office with the intent of getting the Kaiser 10 IEMs, but knowing my sonic preferences, Brannan recommended a new as yet unnamed product, and after some short listening tests, I agreed wholeheartedly.

The next step was creating a design, which I did from home using their website to check out previous designs ( https://nobleaudio.com/en/lookbook/ ). This proved to be more difficult than one would think, not that this was any fault of Noble’s, just that everything was so cool it was hard to make a decision, and frankly I was tempted to let them do as they see fit. I was rather smitten with the “steam punk” look of the watch gears, but felt that it was bit faddish and would probably get old fairly quickly. Eventually I settled on simple and elegant, based on an emerald green with gold flakes.

Then came the hardest part, the waiting. Normal processing for the handcrafted customs is about eight weeks. The fact that the Katanas were still in development may have extended this a bit, but they were definitely worth the wait. I took delivery of them at RMAF CanJam, and began using them almost immediately. They came with a nice pelican storage case, a cleaning brush, a black velvet bag and a metallic owner’s registration card. I was also able to talk Brannon out of a small carrying case.

Though it has taken me a wee effort to develop a proper technique for inserting the left unit (as noted previously my ear canals are oddly shaped, the right just pops in and out, while the left is more difficult), the fit is perfect and the isolation so complete that it was impractical to wear them while walking the show, otherwise I would most likely have left them in the entire weekend. On the flight home I found them to be as effective as any active noise cancelling headphones I have used, while providing a much more pleasurable experience.

I always put a hundred or so hours on an item before performing sonic evaluations, and then I spend a couple of days listening to my test list of songs (as background while performing other tasks) to get a sense of the sound and to note which songs the item performs exceptionally with so that I can go back and use them during serious listening. What made this process unique with the Katanas is that they are so pleasant to listen to, both sonically and comfort wise, that nothing stood out, in fact even during focused listening it was extremely hard not to get lost in the music and forget to pick out the things I was intending to listen for.

To get a feel for the Katana’s soundstage, using my reference rig (Questyle CAS192D DAC and CMA800R Current Mode Headphone Amplifier), I put on “Wedding Rain” by Liz Story (Solid Colors 16/44.1 kHz), which is solo piano in a large room. For the first time I felt like I was listening to a real piano, the Katanas achieving real world dynamics without becoming painful to listen to, while at the same time capturing the resonance of 236 strings ringing in harmonic sympathy as well as the plethora of wall reflections creating an immense, deep and airy soundstage, the richness and delicacy of the Steinway fully realized.

Which brings up phase coherency. The true art (and science) of multi-driver technologies is the crossover. Whether handled electronically or acoustically, time aligning nine separate drivers so that sound waves produced across the sonic spectrum arrive at the ear in phase, is an epic achievement which the Katanas accomplish handily.

To reinforce my observations, I selected The Who’s “Getting in Tune” (Who’s Next 16/44.1 kHz). The richness and sparkle of the piano as Nicky Hopkins tickles the keys during those opening refrains exhibit a realism rarely experienced in audio. I realized at this point that it is the musicality of the Katanas that make it possible to listen at levels that would be uncomfortable with other headphones, letting me hear all the subtle interlaced sounds of what is a very complex recording, each delineated and set in space precisely.

I moved on to Dario Baldan Bembo and his rendition of “Non Mi Lasciare” (16/44.1 kHz). Again, the glittering tones of the operatic tenor were laid bare across a giant sound stage, nestled in a kaleidoscope of plush orchestration. This led me to other emotionally expressive singers such as Melanie (“Birthday of the Sun” Woodstock 16/44.1 kHz), Sinéad O’Connor (“Just Like U Said It Would B” The Lion and the Cobra 16/44.1 kHz) and Dusty Springfield (“The Look of Love” Casino Royal 24/192 kHz) to enjoy chill inducing performances clear, precise and undistorted with a total lack of irritating harshness. The acute resolution and honeyed midrange simply erased unnatural sibilance.

The Noble Katanas handled my speed test track, “Birds of Fire” by Mahavishnu Orchestra (Birds of Fire 16/44.1 kHz) with an unparalleled ease (one of the things that drew me to the K10s originally), marking a speed close to electrostatics. The cacophony of sound created by thirteen simultaneous lead lines that produces distortion in slower drivers was unraveled to lay each instrument bare in its virtuoso beauty.

At which point I decided to step up the game by connecting my turntable and Audible Illusions preamp to the ampsandsound Mogwai to audition the Katanas with some vinyl, beginning with my standard test disc for tonal balance, resolution and sound stage Stravinsky’s “The Firebird Suite” as performed by Robert Shaw and the Atlantic Symphony Orchestra (Telarc). The result was intoxicating, as noted before a huge airy soundstage, with an extremely neutral and natural tonal balance, with pinpoint imaging.

I also listened to Genesis’ Foxtrot (Charisma Japan), Emerson, Lake & Palmer’s self titled album (Atlantic Japan) and Yes’ Time and a Word (Atlantic) detecting a slightly deeper and warmer bass than with their digital counterparts, as well as creamy lush vocals, the Katanas well complimenting the liquid richness of the tube chain, while handily reproducing the sharp attack and extreme dynamics of ELP’s “Tank” (actually visible on the albums surface).

Figuring a review of a pair of IEMs would not be complete without seeing how they work with a phone, I brought up Napster (formerly Rhapsody) and listened to Captain Beyond’s “Myopic Void” which was rendered with an ethereal quality, and though not as rich and musical as my other sources, was entirely acceptable (the most you can really expect from a cheap phone).

Not really mentioned in this article was my time with the Questyle QP1 on which the majority of my listening to the Noble Katana IEMs was conducted, though I felt it only fair to do my evaluations on the higher resolution sources. Needless to say, my listening experiences with the QP1 were very similar to those using the desktop system with one notable exception, noise floor. Due to the extreme efficiency of the Katanas (the most efficient headphone or IEM I have heard) the noise floor on everything other than the QP1 was brought up to audibility, especially the tubes which were a bit microphonic. It didn’t detract from the music, but it was definitely noticeable in the silences between tracks (it was still lower than the baseline vinyl noise).

The Noble Katana IEMs perform completely as advertised (“With an extended top-end that generates airiness and outstanding imaging, Katana’s balance and control are the mark of a master that continues to refine his craft. Combined with a lush mid-range, impactful low-end, and Noble’s signature coherency”). And they work universally well with all forms of music. If you are looking for an IEM to “improve” your system (IE: add its particular sonic characteristics to compensate for deficiencies in your source material or other components) then you could do worse than look at the rest of the Noble line, as they have something to fit almost every preference. But, if you are an audio purist like myself, looking for the sound produced by real acoustical instruments, in a real concert hall, and want a visceral connection to the performer (especially singers), then the Katana should be on your A-list.

In the case of the Noble Katanas, they sit at the pinnacle of performance for speed, accuracy and musicality, providing a large airy soundstage, with a realistically natural tonal balance and a dynamic range that challenges the electronics played through them. I would happily rate them among the finest musical playback systems I have heard, and second only to a live performance in enjoyability.