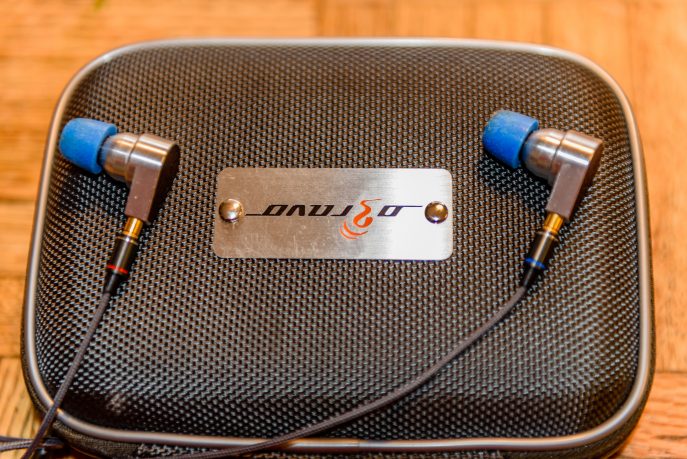 oBravo is a company founded in 2006 and located in Taiwan have made air-motion technology a reality. David Teng, the owner and chief engineer, is creating hand made monitors that are one of the kind products that are both revolutionary in design and unique in the world. David has taken Dr Oskar Heil air-motion transformer speaker technology and incorporated planar magnetic drivers to create the world’s first planar-air motion-dynamic 2 way in ear monitor.

The ERIB-2A is a new design that incorporates an air-motion transformer tweeter to a planar magnetic driver.   The new design is a universal and users can easily adjust them with tips to fit their own comfort levels thus eliminating the need to visit an audiologist for ear impressions.  David has been working on perfecting the design since the company started manufacturing in 2006. Every pair is meticulously designed to provide the listener with a realistic and emotionally involving experience. The company is dedicated to making products that are both exciting and offer exceptional performance. The coaxial design is the world’s first two way that is using both planar and air-motion technology that includes a aluminum body, The company offers two other versions, one with a carbon body and another in wood.

oBravo supplies a well thought out carrying case for the ERIB-2A that includes an optional 1/4 inch jack for use with larger systems. The tips vary in size and are made by Comply. The supplied large tips worked well for me and gave me an exceptional seal. My Astell & Kern AK240 has  a wide variety of different music loaded making it perfect for earspeakers. The reference system, which includes the Chord DAVE and VPI 229D tube amplifier, was also used while streaming Tidal. The VPI Scout turntable with the Ortofon Black 2M cartridge was spinning vinyl.

Doug McLeod’s “Run with the Devil” from his “There’ a Time “album is an excellent acoustic song that comes alive and makes you feel as if Doug is sitting right in front of you playing. The ERIB-2A  brought his guitar to life. The sound coming from the instrument was as if Doug was in the room with me and the tonality of his guitar and the body of the instrument was vivid, detailed and transparent. The tonality of the instruments was as good as I have heard in any in-ear-monitor and competed with products that’s are priced much higher.   The sound of his vocal work was transparent with articulation and clarity that was impressive. Never did the earspeaker compromise his performance. Doug was sitting in a chair and with my eyes closed I could envision him in the studio singing this tune and it always was engaging. The musicality of the performance was as good as when I had him preforming this live.

Imagine Dragon’s “Night Vision” has some terrific music and the track “To me” had my feet and body rocking with the music. The monitor had an excellent sound stage with good front to rear depth and nice air and space between instruments. The ERIB-2A  kept me involved and I never lost focus. Closing my eyes, the music was all around me and the performance was spectacular. The band was rocking on this tune and the sound was dynamic with a terrific top end without any harshness or grunge. The oBravo had its own sound signature which made music come alive.

“Demons” another track on the same album was more of the same. The song had terrific balance and once again the dynamic sound of the ERIB-2A was noticeable. The monitor was able to make the tracks come to life and the AK240 played the song easily and once again highlighted the performance with exceptional musicality.

Holly Cole’s “Temptation” is one of my reference discs when I when I want to know what a product is capable of doing in the bass and treble region, The “Train Song” also has excellent treble extension and the earspeaker made the tune come to life. Holly’s vocals were both seductive and  inviting. I could hear the acoustic bass definition with texture and extension. The bass is balanced and had excellent definition with terrific texture. The treble region was outstanding and the sound was never harsh. The room was present and the shakers were alive in the recording as well as Holly’s vocals. The ERIB-2A was able to reproduce all the music in a defined and realistic sound stage took me to the venue. The interaction between the performers was inspiring and easy to envision. The sound of the room was evident in this song and the sound stage was pinpoint with imaging and excellent air and space between the musicians.

“Jersey Girls” brought Holly front and center with background vocals on the left, The bass again was balanced and had good extension with excellent texture. The sound kept me focused with the performance and Holly’s singing was clear and articulate. Holly’s vocals always captivate me.

Leonard Cohen’s latest album” “You Want it Darker”  is  a prophecy of  Leonard’s final year and preparation for his departure from this world. Using the Chord DAVE with Tidal’s streaming service with the ERIB-2A  gave the planar monitor more power and dynamics using the supplied ¼ inch jack. The title track came alive and Leonard’s vocal was articulate and the sound stage sounded more defined with even better imaging and space. The bass also had more slam with increased dynamics and the top end once again sparkled and was never harsh. nor strident.

Van Morrison’s new album: “Keep me Singing” brought Van to my room. The VPI 229D headphone amplifier is a tube wonder. Using the VPI 229D and the DAVE as the source, “Let it Rhyme” had Van’s vocal dead center and his band in a well defined sound stage with exceptional imaging. The sound stage had air and excellent separation between performers. The VPI 229D delivered tube magic and increased the sound stage and improved the dynamics significantly. The imaging was taken up a couple notches as well. The magic of the tubes brought the tonality to another level and the ERIB-2A  never floundered in recreating the music.

“Hello Babe” from Madeline Peryoux’s “Secular Hymn” provided some excellent definition while  using the DAVE. Madeline’s interaction with the band had terrific synergy. Differences using the big system gave me more of everything. The sound stage was taken to another level and the power the amp brought to the earspeaker  increased the dynamics and bass extension considerably. Madeline’s interaction with the band was special on this track.

The Obravo ERIB-2A is an refreshing new design that is transparent and musical and provides outstanding tonality. The instruments all sounded realistic and the vocal presentation competed with designs that cost significantly more. The vocals were  articulate and presented for both male and female vocalists with clarity and spooky good transparency.  Listeners who are enamored with sound stage will not be disappointed as The ERIB-2A  delivers a fantastic image with both excellent width and depth. The space and air between performers is exceptional. Closing my eyes I was able to clearly identify all performers in a sound stage in a defined space. The detail within the stage was defined without ever getting overly analytical  and the imaging was  superb.

Tonality is important in realistic sound production. Instruments sound realistic and lifelike with the ERIB-2A. The sound of acoustic guitar had accurate string tonality and you could hear the inner body of the guitar. Listening to acoustic instruments with this planar design was a treat. The sweet sound of the violin and the detail of the bow and body of the instrument at times gave me goosebumps and the treble extension was as good as it gets. The extension and clarity of drum cymbals were sparkly and never sounded harsh or splashy.  The Hammond organ recording I heard during this audition was never piercing; products with poor treble extension can make your ears ring while trying to reproduce a Hammond organ. The ERIB-2A reproduced horns and organs realistically and musically.

The bass was noticeable in recordings that require deep bass reproduction, rock and large scale recordings always sounded dynamic with good bass extension. Never did I feel that the earspeaker was missing anything in the bass region and the ERIB-2A benefited greatly when using amplifiers with power . The AK240 always delivered a terrific musical presentation but  switching to the VPI 229 and Chord DAVE brought the performance up significantly. The ERIB-2A scaled up enormously with increased dynamics making the music come to life.

So is it perfect? Well not exactly, as good as it sounded, there were some nitpicks that I had. The supplied 1.4 jack always came out while using the reference system. The jack was getting stuck in the amplifiers and if you moved the jack it would cutoff sound and  had to be jiggled to get it to work properly. I had to remove the bare jack from the amps on more than one occasion. Users planning to use this on a full range system would want to invest in an after market cable to address the jack issue. The US distributor Moon Audio offers cable upgrades for this planar design and would be well worth the investment to get the best cable and would eliminate the issues.

The ERIB-2A offers exceptional value rarely found in products ($899) in this price range. The sound was alive and had detail without ever sounding analytical. The ERIB-2A always delivered musical performances on recordings with outstanding transparency and unlimited dynamics. The product always had me involved with the music and my long listening sessions never made me want to use other earspeakers or full size headphones. oBravo has hit a home run with this revolutionary product and created the  worlds first hybrid planar-air-motion transformer design.  If you looking for the ultimate in transparency you need to check out the ERIB-2A. Outstanding product and highly recommended.

AVAILABLE EXCLUSIVELY IN THE US AT MOON AUDIO