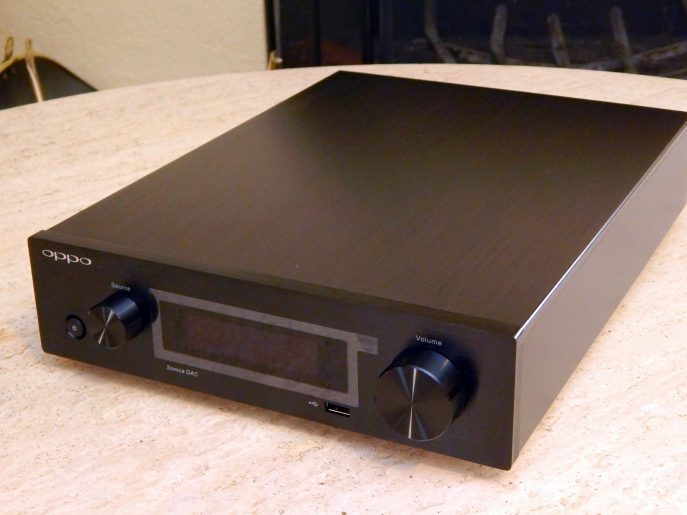 The OPPO Sonica DAC is the second streaming DAC I have reviewed and I quickly came to the conclusion that this is how all DACs should be designed. The advantage of the streaming DAC over the USB DAC is that it removes the computer from the equation. I hear you saying, “but it requires some sort of WiFi device, be it tablet or phone to operate it, which is in fact a computer, so what’s the difference?” I’m glad you asked. First, there are the limitations of USB, not in bandwidth (though that can be an issue) but in protocol. This is especially an issue if you like to listen to DSD and expect to get the advantages that entails. You see, USB is spec’d for PCM and does not allow for bit-streaming, which means that you either have to: A. use custom drivers (particularly difficult with Macs) which have their own issues, B. convert the signal to PCM, at which point you have sacrificed whatever sonic advantages DSD might have or C. compress your bitstream into a PCM signal (ala DoP) which requires 30% more bandwidth to accommodate not to mention the extreme processing overhead at both ends required to do this in real time.

Which brings us to the second issue with using a computer as source; unless you dedicate a computer strictly for use as a music source, and optimize it as such, a computer has a lot going on in the background (not to mention programs you might be running concurrently) which competes with your music software for resources (browsers are especially guilty of this). I have a fairly robust desktop computer (3GHz Quad-core with 16GB ram) and still JRiver occasionally ha some hiccups.  Another issue with computers (at lease of the desktop variety) is portability. My USB DAC has to stay in the office with my computer which is sub-optimal for listening to music on my sound system which is in a different room.

All of this is cured by the streaming DAC which can speak to my computer via a DLNA server, or draw files from a NAS (Network-Attached Storage, essentially a hard drive with a built in server), or, my preferred method, an external hard drive can be connected directly to the DAC.

OPPO Digital is a small American audio/video company based out of Menlo Park, California (not to be confused with OPPO Electronics, a separate but related company), who quickly rose to fame designing and building high performance and inexpensive DVD and Blu-ray players. About three years ago, they launched themselves into the personal audio gaining almost instant popularity with their DAC / headphone amplifiers and planar magnetic headphones, and now they have upped their game with the Sonica Streaming DAC.

For digital inputs, other than WiFi, LAN (Ethernet), USB Audio (Computer) and USB Host (Hard drive), the Sonica has both optical and coaxial SPDIF inputs. There are both single ended and balanced outputs, and both a trigger input and output to allow the Sonica to control or be controlled by external audio components.

OPPO Digital’s Sonica App is available for both Apple IOS and Android, meaning you are almost sure to have a compatible WiFi device on hand already, and are not forced into buying one specifically for this purpose. The Sonica DAC can connect to your network either via WiFi or Ethernet, though if you are going to access high resolution files via a DLNA or NAS I would recommend Ethernet for performance reasons. As I chose to connect my hard drive directly to the Sonica, I used WiFi for communications. Setup is fairly straight forward, and the App walks you through it. (Note: the Sonica App is able to support multiple Sonica devices, which can be operated in conjunction or separately – currently they also offer a Sonica Speaker and other devices may become available at some time in the future.)

For internet streaming services the Sonica supports both Spotify Premium and TIDAL, while for other services they can be streamed via Bluetooth from your mobile device. OPPO also provides an analog input which can be switched in and out from the Sonica App. Another unique feature of the App is a Sleep Timer, an unusual feature for a desktop DAC.

To break it in, I connected the Sonica to my Questyle Audio 800R Current Mode Headphone Amplifier and ran Napster for several days via Bluetooth from my iPad Mini. The sound was remarkably good from a compressed streaming source. I then connected it to my two channel system for a listening test. The sound was good, but a little thin in the mid bass range, so I connected it to the Wells Audio Milo (which needed burning in) and later the ERZETICH Perfidus and burned it in for another week. Reconnecting to the two channel system I began my listening with “And You And I” (Close to the Edge – Yes – DSD). It was clear that the Sonica benefited from the extra burn in, the opening acoustic guitar crisp and full the bass deep and authoritative. The Sonica’s ESS SABRE PRO DAC chip (ES9038PRO) presented a large and precise soundstage, the triangle easily discernible even during crescendo moments.

Switching to Eiji Oue and the Minnesota Orchestra for Stravinsky’s “The Firebird Suite” (DSD), I was put in mind of a box seat in large indoor concert hall, the performance dynamic and energetic with a certain sweetness to reeds, flutes, brass and strings. The impact of the tympanis were palpable and involving.

After an extended two channel session, it was time to return to the two 800Rs in dual mono with the MrSpeakers ETHER C Flow Headphones for the personal audio touch. Selecting a live recording of Kraftwerk’s “The Man Machine” I was transported to the performance I attended at the Greek Theater several years ago. Totally immersed in sound, the experience was exhilarating.

Desiring to be similarly teleported to another era I put on Satch Plays Fats and “All That Meat And No Potatoes”, it was like being at the Cotton Club, Velma’s voice rich and lush a good counterpoint to Satchmo’s basso. The horns were presented as immediate and resonant and the clarinet interlude was honey sweet.

Now seemed the time to return to low resolution sources (IE: Napster via Bluetooth) to get a real handle on the DAC’s capabilities, after all it is a lot less work to render high resolution tracks than low bit compressed tracks. The first song was Phillip Phillips “Where We Came From”. The sound was a bit grainy especially during the choruses, not exactly harsh, but definitely brittle. This played out further with “Rewind” by Stereophonics.

On the other hand Regina Spektor’s “Braille” came across pretty well with just a tad of siblance.

The OPPO Digital Sonica DAC is an incredible value for the price. Employing the ESS SABRE PRO DAC chip, it offers excellent sound quality for a DAC in the under $1,000 arena, and features few others can match. The Sonica App is simple, easy to use, and versatile, and as stated before, offered for both IOS and Android. It should be noted, for those who such things are important, it does not support for streaming DSD128 or DSD256, nor PCM over 24/192kHz. It is also a “what you see is what you get” kind of DAC, so don’t expect it to make mp3s sound like DSD.

All said and done, streaming DACs like the Sonica are the wave of the future, and for my money, the way all DACs should be designed. If you are looking for a desktop solution or whole house audio, you simply can’t go wrong with the OPPO Sonica DAC.

Designs and specifications are subject to change without notice.