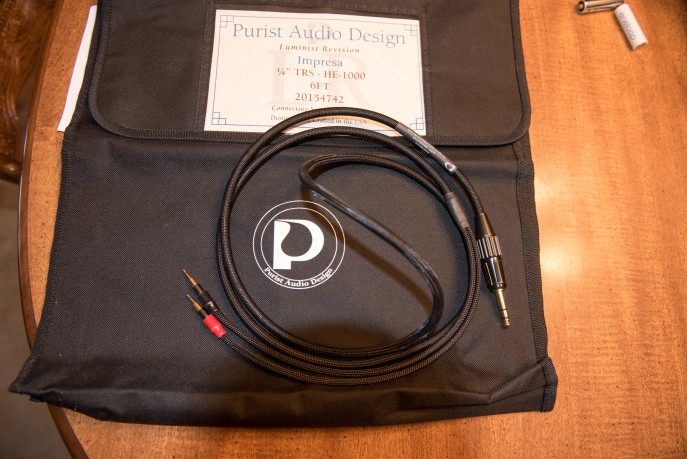 Purist Audio Designs has been making high-end cables since 1986. Jim Aud is a designer that is a visionary in cable design. Since I  have been in the hobby I been aware of Jim’s designs but never had an opportunity to audition any of his cables. The company has been most innovative with their designs over the years.

Headphone manufactures build headphones cables to a specific price point and in many instances most stock cables being used today have many glaring faults. Some sound grainy and many are not built with the best materials, some also use poor quality connectors that can compromise optimal performance. Many aftermarket cables will improve sound and provide better transparency without adding any coloration. The differences depending on the cable material can be dramatic and sometimes monumental. Design philosophy varies from company to company with many different cables being offered.

The Impresa headphones cable is designed using different technology usually not found in other cables. The Impresa is an OFC copper cable. Purist Audio cast purrs all their copper. The cable uses a 21 gauge copper conductor. Once the copper is cast poured they inject air into the pour. The cable is then cryogenically treated three times. Cryogenics technology (freezing of metal) has been found to increase the resistance of the cable to wear. High-end companies using the technology have also noticed a huge improvement in sound quality. The procedure is time consuming and can be very intensive. The Impresa also uses high quality connectors and the jacket sleeving is flexible and light. The recommended break-in to achieve best sound is approximately 75 hours.

The HD800 has a poor quality silver coated cable which is included with the headphone. The Impresa removed the brightness in the treble region that was more noticeable while using the provided stock cable. The improvements   significantly better than the stock cable. The HD800 is brutally revealing and analytical and will reveal all deficiencies in the listening chain. The listening sessions started with the Cavalli Audio Liquid Gold amplifier balanced with the Impresa utilizing a 4 pin XLR plug.

The Impresa made a significant improvement in transparency and was neither bright, nor harsh. The soundstage of  the HE1000 was more defined and had better air and space between performers. The sound of instrument tonality was quite special. Guitars sounded more alive and inner detail was improved dramatically. Vocalists improved with more clarity and once again I noticed no grain in the music delivery.  The sound was musical and sounded more like a live presentation than a recorded one.

Violin recordings revealed the inner sound and body of the instrument. Strings were never strident or harsh. The outlines of the instruments with my eyes closed were more focused and imaging improved. Acoustic bass also had a similar effect and let me clearly hear the bow going up and down with terrific definition. Easily heard and thrilling were the strings being plucked  and the instrument resonating with the sound of the body.. The Impresa never colored the sound, nor did it add or subtract anything from the music. The instrumental tonality was identifiable and sounded  accurate form what I hear in live performances.

The Enigma Dharma uses the same connector as the HD800, so swapping out the same cable with the Dharma revealed a similar result. The Dharma electrostatic hybrid design is also transparent and extremely revealing. The improvements made by the Impresa in the treble, bass and midrange easily outclassed the stock cable. The soundstage imaging was spectacular and the Dharma never sounded overly bright or strident.

In my opinion Audeze LCD XC stock cables can sound grainy. The Impresa cables removed any noticeable grain that I sometime hear when using the stock cable. The musicality stepped up to another level. The soundstage improvement was a major improvement. Detail retrieval and instrument separation with more air and space within the soundstage and made the recordings more enjoyable. The LCD XC performed admirably using the upgraded cable.

Buying reference headphones is an investment. The headphones used in this audition ranged from $1200-$3000. The headphones are all in the top tier of what is currently available in the marketplace. The stock cables supplied by manufacturers are all built to a price point. Many companies prefer spending more money in other areas such as drivers and pads. Unfortunately choices are always made to a specific price point and many times neglect the cable.Spending large sums of money on high quality headphones is a significant investment and getting the most out of them require cables that will let them reach their full potential. The Impresa substantially improved the performance of all headphones used in my listening sessions.

The increased transparency was a welcomed addition and resulted in long  hours and often into the early morning hours and many times it felt as if I was glued to my listening chair. Long late nights were very common during the time spent with the Impressa and even had my wife wondering why I was not in bed. The Purist Audio Impresa cables are an investment and will maximize performance of any headphone it is being used with.. The cables are made using high quality materials and are labor intensive. Built in Texas by craftsman who are paid well adds to the cost of the cable. While $680 is not inexpensive it is fair when you take into consideration the labor-intensive manufacturing process, use of quality workers and consider the cost for employee’s benefits, overhead and then add profit, the Impresa is priced reasonably.

The sound when using the Impresa was cleaner with better detail retrieval. The gentle stroke of a drummers brush hitting the cymbals and tambourines were floating in space with clarity adding  more enjoyment to my listening sessions. The sound was more like what you hear in a live performance.  Vocalist became more articulated and listening to Holly Cole’s seductive voice became captivating. Focusing and imaging were defined and dramatically improved.. Layering of the orchestra in large-scale recordings was all three-dimensional. Classical recordings were more enjoyable with the additional spacing and 3D imaging.

The Purist Audio Design Impresa made significant improvements and clearly took away any obstacles in the performance and left only the music. The sound was alway stellar. If you investing in a top tier system you owe it to yourself to get the most musical enjoyment the system is capable of producing. The Impresa cables are highly recommended for ultimate musical enjoyment and are a well thought out and engineered design from m the mind of Jim Aud. Well made and built to last by artisan craftsman in the USA they receive two thumbs up for top build  quality and musicality. Highly Recommended!

Thank you to Fred Crane at Stereodesk fort the review samples

Available for purchase at http://stereodesk.com