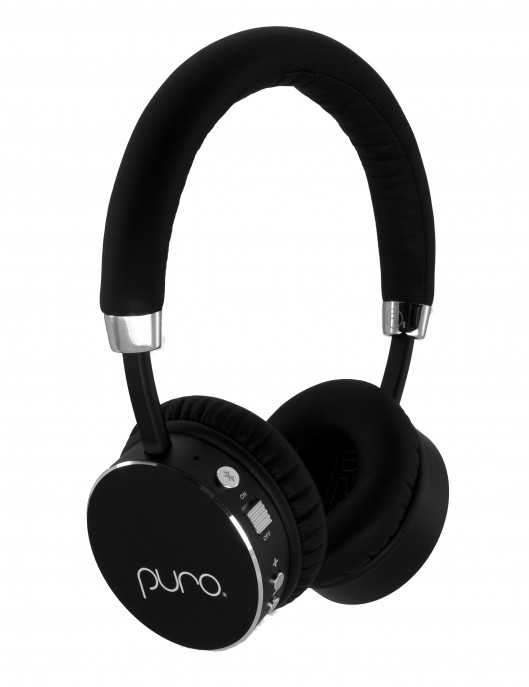 Puro Sound Labs is a relatively new comer to the headphone market space and their products are rather unique with the upmost care in protecting their customers’ hearing. Many younger listeners (and I suppose older ones too) often tend to crank up the music to block out ambient noise in order to hear their favourite bands. However, with longer term exposure this can lead to serious hearing loss, or even worse, hearing loss + tinnitus. Tinnitus is a constant ringing that never goes away and can seriously affect your quality of life. Actually, a few years back, we hired a house painter to paint our main level after some major home renovations. He was an older gentleman and was getting ready to retire. We found out some months later that he committed suicide as a result of a life long struggle with a very bad case of tinnitus. So to every audiophile out there, please protect your ears; we only get one set!

The new BT5200 Bluetooth headphones were just released by Puro Sounds as an adult version to their wireless headphones directed at children. The BT5200s feature improved audio quality and the same advanced volume monitoring system to help guide users to safer listening. In fact, Puro Sounds notes that the BT5200s block out an impressive 82% of the background noise. In side-by-side comparisons to my Bose QC25 Noise Cancelling headphones, the BT5200s do a very admirable job in blocking out background sounds and noise. Actually, they are among the very best portable headphones I’ve come across that do this without active noise cancelling circuitry. While the Bose QC25s do a better job blocking out my home furnace (as I sit next to it in order to mimic background noise in a plane with lower frequencies), I do find that the BT5200’s do a better job attenuating higher frequencies and a broader range. These headphones also let you know when you exceed the maximum output volume to 85dB by changing the colour of the LED on the earcup (GREEN for less than 85dB, YELLOW for between 85-95dB and RED for over 85dB); listening levels over 85dB are known for causing hearing loss over time. Furthermore, the folks at Puro Sound have incorporated a “Puro Balanced Response” curve to allow for clearer listening at lower listening levels. One of the best lower SPL listening headphones are the Grado GS1000s. They are very natural and lively when using them at lower levels and I can certainly say that the BT5200s are very similar in that regard.

The build quality of these headphones is outstanding considering the very attractive $129.99 price tag. They compete with headphones in the $250+ price range with their very solid aluminum construction. They utilize custom 40 mm dynamic drivers and are very comfortable to use for many hours. I’ve had them on my head for entire afternoon’s at work and rarely (if ever) had any sense of discomfort or fatigue.  This is particularly difficult for on-ear headphones as if they are not designed just right, they can become very uncomfortable very quickly. Maybe while not as incredibly comfortable as the Beyerdynamic T51p on-ear headphones, the BT5200s are certainly up there in the comfort factor and I wouldn’t let their on-ear design dissuade you from giving them a serious try. Their added ability to attenuate the office environment was a definite added bonus and I could definitely see their value.

The battery life of these Bluetooth headphones is rated at 24 hours; a very impressive amount of time as many other Bluetooth headphones I’ve come across are typically in the 8-12 hour range. However, being Bluetooth headphones, you need to ensure that your source is Bluetooth capable. For the purposes of this review I used my iPhone 6, iPad Air and my Astell & Kern AK240SS DAP (Bluetooth enabled).  I threw a wide variety of music at these headphones, from large classical orchestral music to good old rock and roll. I also did take these headphones with me to work and while I walked around the neighbourhood to see how they would work as portable “on-the-go” headphones.

First up was some “Hotel California” by The Eagles. As I write this, news was just released on the passing of Glenn Frey. I’ve been a huge Eagles fan since the 1980s and I was very much saddened when I heard the news. His music will definitely continue to live on. The BT5200s certainly did this classic album justice. I would classify the sound signature of the BT5200s as very clean and natural, but definitely on the warmer side of neutral. This in turn portrays a very easy and enjoyable listening experience that rarely, if ever, comes off as fatiguing. The bass presence was certainly there and was very satisfying. I have a tone generator on my iDevices and frequency sweeps showed very good extension down to 40Hz, but beyond this range, distortion started to creep through. Overall however this is excellent for on-ear headphones and the depth in the bass and sub-bass was quite enjoyable and performed admirably. I had to keep reminding myself of the price point as headphones costing 2-3X did not perform this well in the lower octaves.

Randy Meisner’s bass work was clear, tactile and eerily present, but all without bleeding into the mid-range; something many mass produced headphones today cannot avoid. The upper most registers were also very well extended. Many on-ear headphones I’ve reviewed in the past seem to suffer from an upper treble roll-off. Thankfully the BT5200s not only reach down low, but also extend very nicely up high. Back to my frequency sweeps, I could easily hear up to 16kHz before the limit of my 43 year old hearing starts to diminish. I would classify the treble however as “pushed back” very much in the Audeze fashion in order to account for the headphone’s drivers very close proximity to your ears. The overall effect is a very natural and fluid sound that is never bright, nor strident. Finally, the sound staging was quite good; maybe not class leading, I would say that it ranks towards the middle of the pack. Being an on-ear headphone, the imaging can be limited due to the even closer distance of the drivers to the listener’s ears.

Next up, I tried some high resolution music (FLAC album in 192kps) of Mahler’s 6th Symphony played through my Astell&Kern AK240SS DAP. I am happy to report that the Bluetooth functionality here was just fine and I did not experience any “data drop outs” at this higher sampling frequency. Actually comparing the Bluetooth performance to the wired performance, I could not tell any sonic differences with these headphones. A very good sign of the Bluetooth implementation in the BT5200s. With large symphonic recordings many headphones can break down and fail to keep up with the many different players on the recording or begin to smear together many similar sounding instruments. Thankfully the BT5200s avoided much of this and as I hate to bring in the price point of only $129, I was astounded on the “bang for the buck” proposition that these headphones provided.

The imaging on this recording did in fact take a good step forward so I was heartened to see that these headphones could scale with better hardware and recordings. The overall presentation still offered a warm and seductive performance that really drew me in and put a smile on my face. The layering of the bass/mids/treble was done quite well and dare I say, even on par with my favourite on-ear headphones the Beyerdynamics T51p headphones (but these come in at almost 3X the price). The final bits of refinement and clarity (especially comfort and overall build quality) still go to the T51p’s, but the BT5200s were not far behind and for those on a shoe string budget, I cannot recommend these more highly!

Finally, I brought these headphones to work and simply used them off of my iPhone 6 (in Bluetooth mode). I was immediately impressed with their ability to block out the day to day office background noise. As I mentioned, my Bose QC25s do a better job with consistent low frequency noise such as an airplane’s engine, but they do start to fail with higher frequencies (like many generated in an office environment). That’s where the BT5200s really shine with their noise isolation as they can readily block out much of the background noise allowing for a more pleasurable experience and at safer lower volumes! My co-workers appreciated the very little noise leakage regardless of the volumes I played my music; so in the end it was win-win.

Again, the BT5200s continued to impress me. I used a plethora of jazz music that I constantly have with me; from Miles Davis to Wynton Marsalis the BT5200s offered a very enjoyable listening experience that I never once found myself wishing I had brought my more expensive gear to work. The one thing that did however get to me by the end of the day was the clamping nature of these headphones. I would not say that it was significant, but still lead to some eventual discomfort after a few hours. I suggest all designers of on-ear headphones look towards the Beyerdynamics T51p headphones for the “ideal” setting for clamping force as they are certainly class-leading in this category. However, the Bluetooth functionality was really appreciated in an office environment where I could get up and walk around my office and pull files and reports without having to be chained to my music source with an audio cable!

Overall, I found the value proposition of the Puro Sound Labs BT5200s a slam dunk! The minuscule price point of only $129 when taken into account with the excellent build quality and very impressive sonic performance leads me to give this headphone a very high recommendation! The folks at Puro Sound Labs have put a lot of time and consideration in the BT5200 headphones and have chosen some very excellent quality build materials, outstanding Bluetooth implementation and have put great care and consideration into the protection of their customer’s hearing. If you have a teen or pre-teen who often listens to headphones, I wholeheartedly recommend you give these headphones a try! The ability to limit the maximum volume to only 85dB is a real bonus for parents who are concerned with their child’s hearing and for audiophiles who care that they learn what “good sound” is at a young age. Even if you don’t have a child, but want a great pair of portable Bluetooth headphones and don’t want to spend an arm and a leg, I strongly suggest you give these headphones a try!