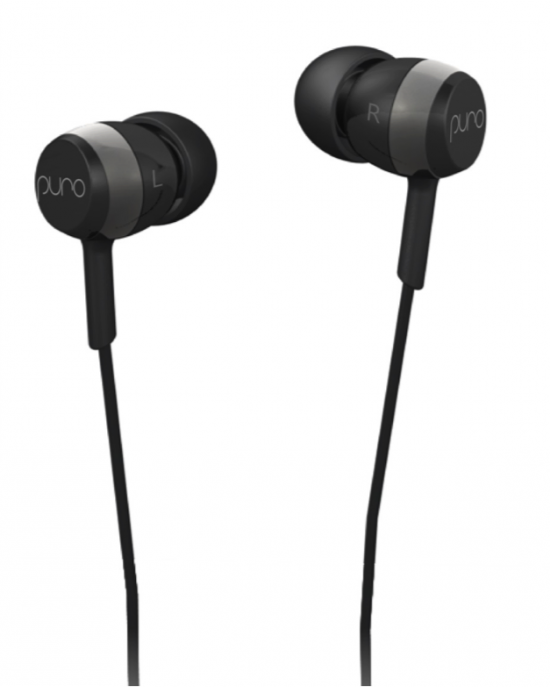 Puro Sound Labs is a company dedicated to the preservation of hearing and deploys preventive measures in the form of headphones. When I first heard of this different take on hearing loss and that their solution was to the problem was utilizing a different type of  headphone – which  many feel is a major cause  to the problem – I thought it inconceivable. I must have miss-read the press release or someone knocked me in the head,b ut sure enough, Puro aims to tackle the problem head-on by attempting to dispel and redevelop the idea of what headphones do to human hearing. It’s a slightly different take than what LSTN does; they instead provide funds to restore hearing in 3rd world countries. It was an intriguing idea and I honestly wondered how Puro was going to pull it off so I gave their new addition, the Puro Sound Labs IEM100 at $30 a spin.

The most visible technology on the earphone would be the ‘Safe Volume Lock System’. This is a switch on the inline mic that allows you to adjust the volume and also ‘lock’ the slider from going above a threshold. After it is locked, the only way to unlock it is to unplug the IEM100 and use the 3.5mm plug to push the lock away. You could of course use a pen or another like-sized object but the jack itself is usually what I would see people doing. The IEM100 also features a patent-pending technology that states it can eliminate muddy bass. Interesting that such a value-priced unit like this has a company technology in it. Even more of note is where the description claims “it’s that bass that clobbers vocal frequencies and forces you to crank up the volume”. Puro labs with the IEM100 isn’t just trying to fight hearing loss with a limiter but also with a fairly aggressive statement towards what they believe causes people to up the volume.

Personally I think the idea of the volume limiter is quite ‘fun’. It’s almost a back-handed ‘nuh uh’ from Puro towards listeners where the only way to remove the limit once you’ve set it is to stop the music. Think about a situation with the IEM100 where you set the limit by pushing the lock in before you start the music. You’ve got a clear mind towards saving your precious hearing. But once the jam starts, you get REALLY into it and want to up the volume now. But alas, you set the volume limit previously and now the only way to get rid of it is to stop your jam. From my personal experience, once the music stops, I reset my bearing on the environment and can think a bit more clearly due to a reduced load on my senses. This also usually includes realizing I may have listened a bit too loudly.  This is almost novel in my opinion, as it’s using the human brain and the physical environment to limit the volume. Puro wants you to stop the music and realign yourself to note how loud you ‘actually’ were listening before you can disable the lock.

Although the idea of the limiter is great, it is a bit cumbersome in practice. There will be added noise at times when using it but it’s become much rarer now. The real problem then that when using it in walks, it can sometimes be adjusted by the mere physical contact to my clothes which adds annoyance to it. The most important one though is that if you were listening to music with the limiter, you may forget to reduce the volume after you raised the limiter to the full position. This caused some sonic blasts during my use. It is user error without a doubt but something I can definitely see others doing. In this price range, there aren’t too many other ways of implementing a volume locker so hats off to them for putting your motto and dream of hearing protection into the product. It’s just a bit incomplete in legitimate use and also a novelty for the most part.

Unboxing the IEM was quite an experience. It has a vacuum seal on the box akin to Apple’s old iPod/iPhone cases where you have to constantly try lifting before it comes off. If you have any sort of protruding nails, I recommend you cut them before you attempt the box opening or else some may be gone afterwards during your prying session. It’s a very small and minimal box that features just the minimums of what you could expect. It’s of my opinion that they could heavily streamline the box opening experience without increase in size or cost in the future.

The build quality of the Puro IEM is in line with expectations from a product of this range. It’s built well for use but doesn’t include any premium cabling or driver housing. However, I was surprised that the in-line unit was built seemingly quite well. It has weight and girth to it and brings authority to the whole product. It’s probably the most ‘legit’ feeling part of the entire IEM100. The driver housing for the earphone are quite lightweight and are made of plastic with a thin mesh on the nozzle. The included silicon ear tips have a perforated design that makes it unique but apart from that, it’s all standard material.

The sound of the IEM100 can be described as spacious with a definite focus towards a detailed mid-range. I found that the sound signature was neutral in that there weren’t any outrageous ranges that would try to overtake the others and that it offered a balance in how the vocals were presented with the highs and lows. Listening to “Promise” by Chihaya of the famed Idolm@ster group was a standout from other J-Pop songs. The vocal tenacity as Chihaya hits the tender notes in her recounting of the tragedies in her life were very well pronounced. The IEM100’s kept up by delivering a very mid-centered punch towards those moments without any muddling by the high frequencies. Best of all, it wasn’t bright and kept things in moderation which I really liked as this song is known for getting hot in the highs at times.

I would definitely call the IEM100 by Puro analystical. It has consistnely performed above average in being able to produce small details of error, distortion, or noise in songs that other units in this range were not able to find to an audible level. One track I love to test with this is “Unravel(Acoustic)” by TK. As with many acoustic recordings done as a side EP to the main songs, these feature background noise, and a fair amount of noise in quiet parts. The IEM-100 was able to not only showcase these details in full but actually went above and introduced more elements of background movement that weren’t as easily caught on higher priced studio monitors. I’m very pleased at the detail of the IEM. And while it doesn’t get too hot for the most part, I would note that using the earphone for long periods of time do get fatiguing. The mid-centric presentation can become a bit too much overtime. I also get irritation from the silicon tips if worn continuously for over an hour.

Overall, I would say that the sound of the IEM100 is excellent as a device for listening to acoustic musicals or songs with a strong take on the singer and string instruments. Rock comes to mind as a great contender. I am however a bit disappointed at the general performance with pop and modern dynamically compressed music. The IEM loses much of its spatial abilities then and get too congestive to listen to those. This makes the IEM100 very genre and use specific if you want to get the most out of it.

My time with the IEM100 was good in how well it presented well mastered light material but afflicted by the knick-knack that is the volume slider. It caused quite a bit of annoyance during my initial test runs using it to where I outright just stopped messing with it after multiple mess-ups with volume and the slider moving while walking with a jacket. I would recommend the PURO SOUND LABS IEM100 to those that listen to vocally strong genres. It delivers the efforts of a well mastered album into the wearer at a budget price. PURO has a ways to go as their implementations of hearing-loss measures are still in their early stages, but I believe they’re on the right track in attracting users thanks to the superior detail production in the IEM-100s at $30.