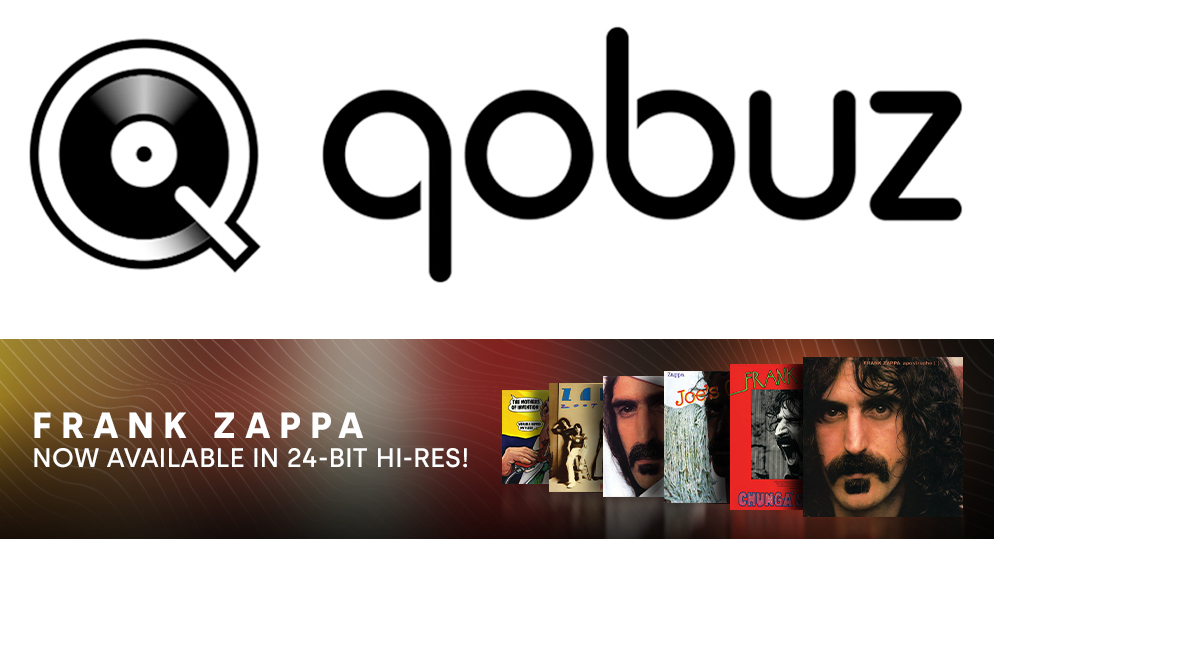 Qobuz, the music lovers’ Hi-Res streaming and download provider, has partnered with UMe and Zappa Records to provide dozens of Frank Zappa albums for the first time in Hi-Res Audio.

UMe, the global catalog company of Universal Music Group, and Zappa Records are launching today a Hi-Res reissue campaign on Qobuz totaling 29 albums spanning all phases of Zappa’s groundbreaking career. The five-week campaign will span a series of drops between now and May 7th, with classic and influential albums released for download and streaming in Hi-Res audio quality for the first time.

Ahmet Zappa, representing Zappa Records, said, “Qobuz’s awesome combo platter of Hi-Res Audio and the ability for fans to immerse themselves into the album art of their favorite musicians is an incredible listening experience and a perfect fit for Zappa Records. As far as I’m concerned, the ‘z’ in Qobuz stands for Zappa and we know fans of the ‘World’s Finest Optional Entertainment’ are going to love the Zappa Qobuz experience. As FZ said: ‘Music is the Best!’”

“Frank Zappa was passionate about making his music sound as good as possible and we are excited to continue that legacy by releasing several of his albums in Hi-Res Audio with Qobuz,” said Bruce Resnikoff, President & CEO of UMe. “Fans on Qobuz canexperience Frank’s genius in the way he would have wanted his music to sound.”

Beginning April 2, fans will be able to stream and download nine albums exclusively on Qobuz. The albums will be available in native 24-bit Hi-Res FLAC format. Each will include an extensive PDF digital booklet, a feature only available on Qobuz’s streaming apps. The assortment includes the second album from the original Mothers of Invention, Absolutely Free, first released in 1967, and Halloween 81, documenting Zappa’s famed holiday residency at New York City’s Palladium, in both full box set and edited ‘highlights’ versions.

On April 1, Ahmet Zappa and Joe Travers, the Zappa “Vaultmeister,” will join Qobuz Chief Hi-Res Evangelist, David Solomon, and the Qobuz team for a livestream discussion. This upcoming event is part of Qobuz’s weekly Qobuz Live series that features hot topics, brands and personalities in the music-lover and audiophile worlds. The livestream will cover the story of Zappa Hi-Res archives, the importance of audio quality, and the upcoming Zappa Hi-Res catalog releases. Additionally, Travers is curating an exclusive annotated Zappa playlist for Qobuz, which will be released later in April.

According to Qobuz USA Managing Director Dan Mackta, “Presenting the work of iconic artists in the best possible quality is our reason for existence. Frank Zappa’s music continues to inspire listeners all over the world and Qobuz is honored to be able to promote his artistic vision.”

See the list of Hi-Res Frank Zappa albums to be released exclusively on Qobuz April 2, and listen to Frank Zappa on Qobuz HERE.

Founded in Paris in 2007, Qobuz is the world’s first Hi-Res music streaming service and a pioneer in high-quality sound. Launched in the US market in 2019, and available in 11 other countries worldwide, Qobuz is designed to meet the needs of music connoisseurs and audiophiles. Offering an exceptional range of exclusive editorial content written by a team of experts, in addition to liner notes and a catalog of more than 70 million titles, Qobuz is the undisputed choice for the most discerning music lovers. For more information: qobuz.com