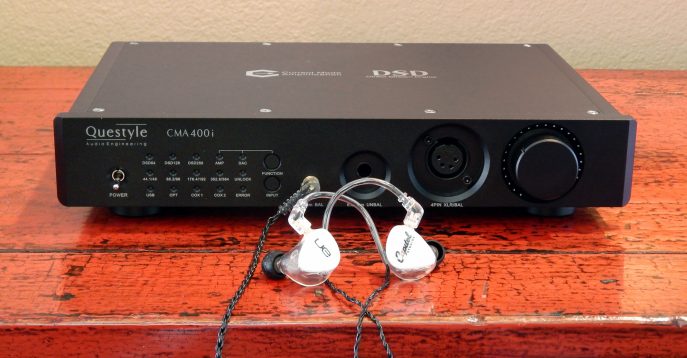 About two years ago, Questyle Audio discontinued their popular entry level desktop DAC/Amp, the Q192, in favor of their new Portable Music Server the QP1R. Since True DSD had become a focus for the company and the DAC chip employed in the Q192 did not support it, the Q192 was no longer representative of Questyle Audio’s direction. Instead, they adopted a top down approach to new products, beginning with the well received CMA800i DAC/ Preamp/Amp, a combination of their then flagship CAS192D True DSD DAC and their CMA800R Current Mode Headphone Amplifier in a single case sharing a single power supply. They then released their even more popular CMA600i DAC/ Preamp/Amp, a scaled down version of the CMA800i, with a less expensive DAC and a smaller power supply, but offering more gain and a balanced output (see Eric’s review here). They followed this up with their “Gold Stack” Reference System which I reviewed last year (see the review here). Now they have released a new entry level desktop DAC/ Preamp/Headphone Amplifier the CMA400i, and I would not fall very short to call it state of the art.

I would be remiss in reviewing a Questyle product without some time spent on the technology, as utilizing new and exclusive technologies is their forte. In fact, they hold at least eight patents, the first being their application of Trans Linear Theory for what they call “Current Mode Amplification”.

The primary drawback to Current Mode Amplification is that it requires a fixed impedance load, which makes it entirely inappropriate for use with speakers (or headphones) which are a dynamic impedance load. To deal with this, Questyle developed a multi-stage amplifier topology. The first stage converts the incoming Voltage Mode signal to Current Mode (in Voltage Mode the signal is created by modulating voltage, whereas in Current Mode, current is modulated). The second stage is a fully discrete pure Class A amplifier operating in Current Mode, all signal amplification takes place here (Gain). The third stage is the negative feedback loop also operating in Current Mode (the negative feedback loop is employed to improve stability, IE: limit Total Harmonic Distortion [THD]). The final stage converts the signal from Current Mode back to Voltage Mode thus making the amplifier compatible with dynamic impedance loads. I hear you saying, “Well that’s fine and all, but what’s the benefit?” The benefit is speed. Questyle Current Mode Amplifiers have a linear bandwidth (linear bandwidth refers to the frequency response at all power levels from 0 to full rated power) in excess of 500 kHz, and by having the negative feedback loop operate in Current Mode, they produce no Transient Intermodulation Distortion (TIMD – that slight harshness and metallic sound associated with solid state amplifiers).

At this point I would like to comment on the deceptiveness of power ratings. While the Questyle Audio CMA400i has a fairly respectable power output of almost a Watt at 32Ω, due the Current Mode Amplifier, it is actually equivalent to amplifiers of much higher outputs using other topologies. “How is that,” you ask? Well power is the product of Voltage and Current, essentially Voltage is pressure and Current is flow, and it is the Current that does the heavy lifting, since Current Mode Amplifiers operate in the Current domain, they tend to be Current heavy. To give an analogy that might be easier to understand, in an engine, Horsepower is the product of Torque (twisting force) and RPM (how fast the motor is turning). Torque is the equivalent of Current and RPM is the equivalent of Voltage. As any gear head can tell you, if you have two vehicles with all else being identical, it is the vehicle with more Torque that has the greater pulling power. Back in the world of audio, it is Current that determines how fast a speaker driver starts and stops, which determines how much detail you have and how accurate, especially in the low frequencies, which require much more Current to reproduce.

Questyle Audio, never afraid to show their build quality and use of top quality components including a custom made NORATEL Toroidal Transformer, Nichicon FG capacitors in the power supply, WIMA capacitors in the audio chain and DALE military resistors

True DSD is an implementation that involves bit-streaming DSD from the source to the DAC chip to be decoded in its native format without encoding into PCM packets (DoP) and without the use of filters (including the standard low pass filter, giving Questyle DACs a bandwidth of about 100kHz with DSD64), bypassing all digital signal processing including volume control.

I received a prototype Questyle Audio CMA400i a couple of weeks ago to conduct an IEM review. I know you’re thinking, “How so?” Well this is the most exciting thing about the CMA400i, it was designed from the ground up with IEMs in mind, and goes so far as to be the first desktop DAC/Amp to include a 2.5mm Balanced output. It also has user accessible gain switches on the bottom for use with IEMs. Beyond that, with the press of a button it can be used as a straight DAC, with both single ended and balanced outputs, or as DAC/Preamp for use in a two channel system.

The CMA400i was the best match for the Periodic Be IEMs of all the sources I tested with them, taking full advantage of the Be’s extended high frequencies without being painful or fatiguing, while providing strong, well controlled bass.

Starting with the MrSpeakers ETHER C Flows single ended, in the low gain setting, listening to “And You And I” (Yes – Close to the Edge – DSD), the inky black silence of the noise floor was breath taking, allowing me to hear a synthesizer subsonic sweep that I had never noticed before in the thousands of times I had used that track for reference. The dynamic range was stunning, and I was able to achieve plenty of volume in the low gain mode single ended (I never came close to full volume).

Switching to balanced, with the same track, the increase in dynamic range was palpable. The soundstage was huge, giving the song that epic presentation it truly deserved. The levels of detail cannot be overstated, especially in the low frequencies elucidating the many layers of musical instruments used in the recording.

Returning to IEMs, I broke out the Noble Katanas, it was transcendent. I would point out that this was the first time I listened through a desktop unit where I didn’t hear noticeable levels of gain noise, in fact it was dead silent at normal listening levels with no signal. I purposely waited until I was listening through the Katana’s before having my usual session with “The Firebird Suite” (Eiji Oue & Minnesota Orchestra – DSD, Robert Shaw & Atlanta Symphony Orchestra – 24/96kHz vinyl rip) as I anticipated this being the first time I would fully experience what the Nobles are capable of and I wasn’t disappointed. For the first time, I felt the same chills listening to the Eiji recording that I normally associate with the Shaw performance. Not only was the soundstage three dimensional and large, the instrument placement laser pointer sharp, the dynamics were as close to real life, as I have heard. The tonal balance was exceptional, making it easy to separate the oboe from the French horn from the clarinet from the bassoon, the violin from the viola. There was a breathy flute overlayed over the oboe that simply wasn’t there before. And the tympanis, fast, impactful and dynamic, each pulse clearly delineated, with the triangle ringing a sharp counterpoint.

To judge the musicality of the midrange, I put on Sinéad O’Connor’s “Just Like U Said It Would B” (The Lion and the Cobra – 16/44.1kHz), not only is her voice heart wrenching, it is a bit strident bordering on harsh. All of the emotion was there, clear without veil or syrup, but totally musical, edge without harsh or distortion.

Exploring the CMA400i’s performance with less expensive gear, I popped in the 1MORE Dual Driver IEMs and cued up “Non Mi Lasciare” performed by Dario Baldan Bembo (16/44.1kHz). The piano was rich and powerful, the bass deep, resonant and pervasive. As for the operatic vocals they were mystical, performed in a vast empty hall.

As a final experiment I connected the balanced preamp out to my desktop rig to see how the CMA400i fares as a DAC. While not as “Analog” sounding as my reference DAC (which sells for over double the price), the sound was spectacular, exhibiting amazing bass extension and control, as well as, a smooth clarity that bests most DACs I’ve tried, as evidenced playing Jimi Hendrix’s cover of “Born Under a Bad Sign” (DSD128).

The Questyle Audio CMA400i is one of the most versatile products I have tested. It operates equally well with IEMs and hard to drive full size Cans. While the ETHER C Flows may not be the most difficult to drive headphone, it is a planar magnetic which do like a little bit of current. In the high gain mode using the balanced output I would be surprised to find many headphones that the CMA400i can’t drive easily and well. At its price point, I can heartily recommend it as a low cost high performance DAC, though you may well discover that its amp outperforms whatever amplifier you were planning on matching it up to. And for those of you who wish to enter the wonderful world of two channel audio, simply add a pair of quality amplified speakers and you’re ready to go.

As for sound quality, it leaves little to be desired, it has excellent tonal balance and exemplary bandwidth and detail. The low frequency extension and control is a must hear to believe proposition. While it does not veil or sweeten the mid range, neither does it add anything to it, meaning it has a musicality that makes even listening to headphones that fall out on the bright or harsh side can be a pleasant and eye opening experience. While I attribute a great deal of the performance of the DAC to the amplifier section, and the wonderful ears of the designers at Questyle, you would be hard pressed to find one that has greater detail and low frequency performance.