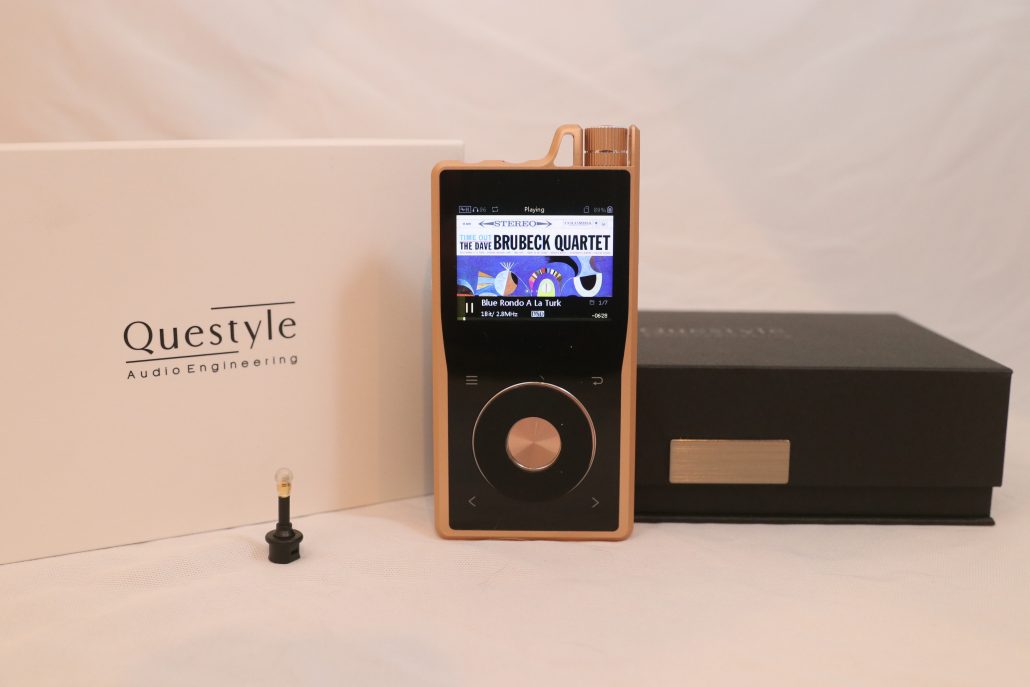 Over the last few years all of us at Headphone.Guru have come to expect excellence from Questyle Audio. So far, every product we have had in our listening rooms have proven to be not only great performers but also incredible values. Questyle Audio’s Current Mode Amplification (http://www.questyleaudio.com/index.php/technology) provides pure Class A operation to all of their products and the listener is certainly better off for it. Current Mode provides clarity and power in spades regardless of the headphones we have used.

Two years ago, Questyle Audio released their original DAP, the QP1r to rave reviews including ours. (https://headphone.guru/questyle-qp1r-dap-a-hi-res-value-without-sonic-compromise/ ) The combination of price, performance and original iPod like functionality made for a product of the year award. For the next year or more it was one of my reference personal audio devices. Now they have come to market with the QP2r. Will the new kid keep up with its older sibling?

Out of the box first impressions can be excused if somewhat confused. The QP2r looks almost identical to the QP1r. In fact, it is the same machined aluminum case as the original. Sharp eyed users will note that the right of the two Micro-SD card slots is closed however. The QP2r has just the one SD card slot. However, rumor has it that it is capable of handling the new 400gb card just out from SanDisk. It certainly had no issues with my 200gb or 256gb cards during the review period. Internal memory is doubled to 64gb. The QP2r also has physical control buttons on the left side for forward, back, pause and play. A handy touch compared to the QP1r where you did everything via the OS. The physical iPod style control wheel is still there but with a finer feel and an included rubber disk to assist with more finger friction for controlling the wheel.

Digging into the OS you find a complete rewrite of the firmware. The QP2r still uses Linux however, the implementation is faster and offers many more user options from the setup menu. The first thing I noticed was twice the gradient of volume control now at 120 steps. Three gain levels as well as a doubling of power when using the 2.5mm balanced connector give a wide range of volume and power options for the user. There are also two BIAS modes, standard and high, which allows the user to essentially force only Class-A amplifier mode. High BIAS and balanced out should be able to drive most any headphone available. It certainly drove any headphones or IEM’s I had in house to volumes above any I would normally listen. This is not including the DSD gain or full range EQ. There is also a balance control should you need a L/R tweak.

Internally the PCB board has 70% of its space devoted exclusively to audio circuitry with four full groups devoted to Current Mode amplification allowing for full Class A in Single ended or Balanced mode. Compared to the QP1r output power is doubled. Total Harmonic Distortion is a vanishingly low 0.0005%. Output impedance is <0.1 Ohms meaning the QPr2 should drive any headphone you hook up to it with ease. Charging is now done via a USB-C connector that is supplied. Simply plug into any USB charging block you have. Battery life is an estimated 10 hours which concurs with my experience. One of the big changes is the adoption of the new flagship AKM AK4490 DAC chip which supports PCM384, DSD256 and 32-Bit operation. Overall it appears Questyle Audio reinvented the QP2r from top to bottom. So, how does it sound?

Starting off with the JH Audio Layla’s in 2.5mm balanced mode, I started with Linda Ronstadt’s What’s New album of classic early 20th century standards. I’ve Got a Crush on You (1983 Asylum 24/192) uses the full Nelson Riddle Orchestra with upright bass, drums and trumpet in the center to recreate a singer in a club. The sense of space during the recording was marvelous. The QP2r relayed the dimensionality of the studio to great effect. Another striking aspect was the incredible purity of Linda’s voice. Liquid vocals. A touch of reverb and echo gave life to the hall as she sang into the microphone. The natural sense of fingers on the strings of the upright bass conveyed an “I’m there” feeling to the recording. It was a beautiful presentation.

Next, I plugged in the Noble Audio K10 IEM’s and queued up the title track from Joe Satriani’s Shockwave Supernova (2015 Sony Music 24/96). Bass, drums and Joe’s soaring guitar solos give a workout to any audio system. I appreciate great tone and a crisp attack with any great guitar solo and the QP2r delivered as required. Soaring through the solid sound of bass and drums, Joe’s guitar delivered tone, growl and bite in that order as he flowed through the song. The Qp2r conveyed energy and flow and a terrific clarity to the track.

Moving on to the Ultimate Ears UE11 IEM’s. The UE11’s have a low end that digs deep and really shows off great bass. So, I put on Chicago II’s Movin’ In (1970 Columbia 24/96). Peter Cetera’s bass in this era of Chicago’s music was used as a clear foundation for each song. He digs deep down the fretboard and the UE11’s responded with solid, clear and low bass. Balancing the bass is Walter Parazaider’s delicate flute, working with G Dorian flair as the intensity of the track rises. Piano, horns and drums come in as the volume rises. The QP2r keeps everything together in a fluid and musical way. The power of the band is well in evidence as well as their subtlety as the song flows from Powerful to subdued moments. Terry Kath’s strident vocals are captured with all the strain of his worry and anxiety for the survival of our society. This song could be about today and not nearly fifty years ago as a social statement. The QP2r unleashes the UE11’s to their best effect. Very satisfying!

Wrapping up with the Focal Utopia’s I put on the Dave Brubeck Quartet’s incomparable Time Out album (1959 Columbia DSD) The song “Three to Get Ready” features Dave Brubeck’s jazz piano with an all-star trio of Paul Desmond on Alto Sax, Eugene Wright on Bass and Joe Morello on drums. This jazz standard is both beautiful and very well known to most older audiophiles. As such it is a great album to display or reveal strengths and weaknesses of any system. High hat and brushes on cymbals were crisp, with the swish of the brush on cymbal. Snare was crisp and crackling. The upright bass exhibited the subtle pluck of fingers and slight rasp as strings vibrated across the fretboard. The alto sax was breathy and had that rasp of reedy vibration. Dave’s piano sounded lifelike with great tone and nuance. The QP2r was up to the task. Driving one of the premier over the ear headphones available today the Questyle Audio DAP was more than a match for the mighty Utopia’s.

It is difficult to move the bar when a first effort was so strong. The QP1r was a shot out of the park from Questyle Audio. Fortunately, but not surprisingly, the QP2r is another home run. It does its specific job with aplomb. Remember, this is not a Wi-Fi connected device. It is a Digital Audio Player. You fill it with music and no connectivity is required. Unlike my Astell & Kern AK120 MK II which streams as well as play (For another $400 in price) the QP2r is a specialist. On the go high end audio. Just bring your favorite headphones. The QP2r will make the best of what you pair with it! Highly recommended!