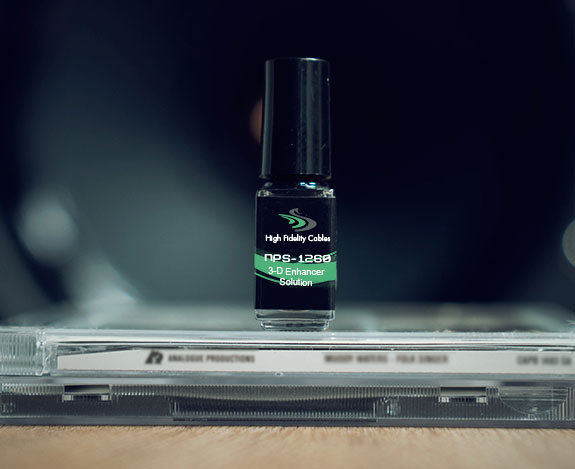 Too good to keep a secret!

Rick Schultz assured me that letting the NPS 1260 settle in for at least six weeks would reveal the optimal performance, but what I heard in the first three weeks was so phenomenal that I felt compelled to rush it into the July issue. In a whirlwind go-around at the last minute with Enjoy the Music.com‘s Creative Director, Steven R. Rochlin, we decided to publish in July (see review here) with a follow-up to be added in the August issue. I’ve held off to the last minute again to give this goop as much time as possible to do its thing, so here we go….

The description on their website makes a big issue of the “flow” that NPS 1260 imparts to the music. I was beginning to feel that flow by the time I concluded the initial review but not strong enough to make a big deal of it. Now, at eight weeks out from the first application and six weeks out from my final application, I’m ready to talk the talk. A week of music-free recreation with family in the Adirondacks, punctuated by the occasional take-off and landing of seaplanes, followed by a week of both intense and casual listening has left me even more impressed with this product. At first publication, I felt a little queasy that I might have over-hyped the NPS 1260. Now, I feel obligated to heap even more praise on it.

The joyful flow of music that is now so prominent stems from even greater resolution and transparency. While this might ordinarily translate into an inauthentic hyper-detail that could be irritating or put-off-ish, the increase in bloom that accompanies this improvement creates a fluidity from beat to beat and note to note. The triumvirate of resolution, transparency, and bloom also impart a greater three-dimensionality not only to the soundscape, but to the musicians themselves — a feat I had only previously experienced with LPs played on Kronos turntables with their counter-rotating platters.

To be sure, some LPs were able to achieve this three-dimensionality better than others. The music quality of the recording still matters, but with NPS 1260 the best recordings really get better. Think “Dark Side of the Moon” and “Brothers in Arms”. Live albums like side one of ZZ Tops’ “Fandango” recorded in The Warehouse, New Orleans, sent goosebumps up my arms and down my legs. The audience was so present it took me back to the seat-less Armory where I saw them here in Rochester, NY, a few years ago, standing 20 feet from Billy Gibbons and Dusty Hill.

The joy created by the flow of the music probably comes from the lack of brain power needed to process it. It normally takes 30 micro-seconds for the various parts of the brain (including the primitive “lizard brain” within us) to process a given audible input. If we get tripped up trying to decipher the lyrics, or figuring what instrument is making that particular sound, or what are those notes coming from behind the front row of musicians in an orchestra, it requires extra interpolation to figure out all those answers. The music can get smeared or the timing tripped up.

The resolution, transparency and bloom imparted by the NPS 1260 make the music flow more naturally than any system I can recall. Additional improvements over the past few weeks include a tightening and strengthening of the low bass. My Kharma speakers go down to about 33Hz and I’ve never heard them sound this good down there. The lower octaves of a piano literally growled with one piece I heard and my Chinese drum cut was so focused and transparent that what I used to think were dozens of drummers now sound like little more than a handful. Moreover, the timbre of the largest drums comes through with more authenticity — enough to make me question my nagging desire to add subwoofers.

The soundstage had been well defined and somewhat holographic at three weeks, but it was much more so now. The depth of field became far deeper, particularly in the center, but less so in the extreme corners. (Recording, mixing and mastering engineers probably conspire against planting much music in those far reaches anyway.) Nevertheless, it was easy to willfully shift my attention anywhere on the soundstage or simply follow the interplay of musicians if I wished.

The height of the soundstage became much more apparent with many recordings. Perhaps this is due to the vaulted ceiling that is lowest behind the speakers and rises to the wall behind the listening chairs. This revelation of height combined with the further enhancement of the music coming out into the room rather than hanging back behind the plane of the speakers made the music very engaging.

Turning the volume up close to what you might hear in a live presentation — say with the VU meter bouncing between 90 to 95 dB at the chair — combined with the very quiet noise floor, made it almost like being there. It also brought the dynamics a lot closer to live music. I mean, do you really want to stay at home and listen at 80-85db? With sound this good I also found myself less tolerant of mediocre music content or poorly recorded LPs. Life’s too short.

How boastful was it for me to claim my rig now sounded like one that cost hundreds of thousands of dollars? I stand by that claim even more firmly now with the caveat that it might jump another hundred grand with a finer cartridge than my $750 Charisma Audio 103 moving coil daily driver or a newer DAC than my Calyx 24/192. The NPS has given me a clearer window into what the weakest link in my audio chain might be. Regarding my loom of Synergistic Research Foundation Series cables that run roughly $600/pr., I would think that I’d have to spend another $25,000 for five interconnects, a digital cable, and speaker cables to come close to what the NPS-1260 has brought to my system. And even that might not do it because the NPS works on the critical points of contact of the cables and the components. That’s where the nasties happen, no matter how cryo’d or single crystal, or high-voltage treated your cable may be. Of course, higher quality cables plus NPS 1260 might take you even higher than Virgin Galactic — and for a lot less money.

Looking back, as well as forward, the only regret I have about this review is that I didn’t have the foresight to compare an NPS treated interconnect with an untreated one at the very beginning. To do it right, I might have treated the interconnect from my tuner to my preamp and run it six weeks to let it really blossom, then clean out the RCA inputs on the tuner and preamp and A/B compare with an identical interconnect without NPS. Had I done this first, then gradually apply it to the rest of my rig, the review would not have come out until the September issue, but it would have allayed any doubts caused by the slow improvements.

The NPS 1260 is simply too good to keep secret that long. Having spent a week away from music and then returning to even more improvement helped quell any questioning of my overall conclusions. I had pretty much maxed out the Blue Note ratings but I’ve asked Steven R. Rochlin to bump up the Sub-Bass and Soundstage Depth to five Blue Notes. And as for Value, as you might suspect, it’s off the chart.

This brings to mind a couple of advertising slogans from prominent manufacturers:

Porsche — There is no substitute.

And from a Harley-Davidson T-shirt I saw once:

You either own one or you don’t.

I’d have to put on another hat and charge big bucks to come up with a comparable slogan for NPS 1260, but I think you get the gist. And with this goop on all my cables and components, I should probably mention that my rig is loaded in all my future reviews. With NPS 1260 in the rig, reviewing other components is almost like cheating.

Thank you, Rick Schultz, for elevating my experience of music so dramatically. NPS 1260 is a gift to the entire industry.