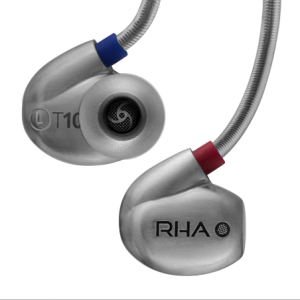 Reid Heath Acoustics, also known as RHA, is based in Glasgow, Scotland. RHA began in 2011 by designing and building over-ear and on ear headphones at reasonable price points whilst also providing an in ear option – the MA350. However, they have recently discontinued their over and on-ear products and now concentrate their expertise with the production of in-ear headphones. Over the past three years, RHA have developed and expanded their range of in-ear headphones to include products like the MA600i and MA 750i. The introduction of these two ear pieces and the advances in technology it took to build them has led them to their latest innovation; the flagship T10i. This is an intriguing product for me to review as I have heretofore been disappointed when sampling in-ear headphones.

The RHA team have given careful consideration and attention to detail in the packaging of the T10i. It becomes obvious, right out of the box, that no corners were cut in the manufacturing of this device. The amount of accessories that you receive at this price point is impressive.

The T10i comes in a thin built black cardboard box with information and easy to read instructions printed along the sides. Open the box and inside you can find the T10i along with three sets of tuning filters for added bass and treble. These filters are colour coded; black corresponds with bass, white with reference and copper with treble. The filters are labelled and attached to an aluminium plate. There is also another larger rectangle shaped aluminium plate in which 10 removable ear tips are placed. Six of the tips are “Dual Density” and are available in small medium and 2 of them are large. The remaining four tips are divided into 2 sets of “Memory Foam” and “Double flange”. RHA also provide a soft leather case for carrying the ear tips. There is also a three button remote attached to the cable for adjusting the volume and a built in microphone that can be used with compatible devices like your iPod or iPad.

The T10i’s construction is like no other headphone or earphone on the planet. RHA have pioneered the use of Metal Injection Moulding (MIM) to create the driver housing consisting of stainless steel which forms the shape of the T10i. In the early stages of the moulding process a thermoplastic binding polymer is added to the stainless steel. This is done because the steel alone cannot be processed by the machinery used to create the moulds. Once these two materials are combined they are then heated and injected into the specified mould creating the walls and over all shape of the T10i driver housing. However because of the added polymer the housing itself is 20% larger than it should be.

RHA’s engineers have devised a two-stage process to re-size the T10i housing to its original proportions. The first stage consists of taking the two enlarged driver mouldings and immersing them in a chemical bath and this process dissolves most of the polymer particles. The remaining particles are removed through a process called “thermal de-binding”, which is basically where they superheat the two pieces. The result is a completely intact stainless steel earpiece with internal pores but the moulding is still slightly too large.

The final phase in the resizing process is where the engineers remove the added spaces inside the earpiece created by what is called “thermal binding” achieved by a process called “sintering” which happens when the two mouldings are superheated yet again but this time to an even higher temperature than in previous stages at approximately 1300 degrees Celsius. Although this temperature is very close to the melting point of the steel, it isn’t enough to effect the integrity of the structure and in effect forces the reduction of the shape of the earpiece to its target size. In the end you are left with a beautiful all metal earpiece polished and textured in brushed stainless steel with remarkable durability.

The multicore, reinforced, oxygen free copper cable of the T10i is an exceptionally well thought out design and is made from a grey rubber material that is both flexible and eye catching but the patented mouldable over-ear hooks are what really stand out. It is important for me to have an ear piece that fits correctly to my ear without coming loose. One of the main reasons for me choosing over ear headphones instead of in-ear headphones was this very problem. When I was asked to review the T10i I had my doubts as to whether I would like the earphone or not. In the past I had never been able to find an in-ear that would actually stay in my ear and not hurt after long listening sessions. The combination of the correctly shaped stainless steel driver along with the over ear hooks and the removable ear tips made for a surprising listening experience that left me wondering how they did it. I tried all of the ear fittings and the double flange tips were the ones that seemed to worked best for me; they never once came loose from my ears, even while lightly jogging which was a revelation and makes me think that maybe I have been missing out by not trying IEM’s sooner. My house mates also tried them on with the appropriate ear tips and nobody complained about discomfort of any kind.

Another thing to note about the T10i’s is its noise isolation design. I think this section of the design is where they really got it right; background noises are kept in the distance and sounds like coughs and moderate talking volumes are never noticeable. Outside, however, some sounds in the environment do become more noticeable and even intrusive. Loud sounds such as trucks beeping, shouts and dog barks are things that you will hear and I think that they are things that you should hear, especially in heavy traffic.

If I was to categorize the overall sound of the T10i I would have to say that it leans more towards a bass heavy sound rather than a neutral or overly bright presentation. I tend to gravitate more towards the neutral to bright side of the spectrum when choosing gear (I own both the Sennheiser HD800 and Beyerdynamic T1). At first I thought that the T10i was slightly too bassy for me. This changed dramatically when I replaced the filters. The bass filters were a no go and the reference filters were still slightly too bloomy. I finally settled on the treble filters as they seemed to suit my tastes best. The treble filters really cleaned up the sound and prevented the bass from bleeding over into the middle. They also made it easier to pin point certain parts of the sound scape where instruments like the splash and ride cymbals on a drum kit were given enough space to breath.

The majority of my listening with the T10i was done with an iPod classic and Cowon J3. I do prefer the Cowon over the iPod and I paired this player with both the Fiio E07K and Fiio E11. Amplifying the T10i is not necessary and only minor improvements could be heard when I introduced both Fiio amplifiers which I’m sure will be good news for anyone not wanting to splash out extra cash attempting to improve sound quality as it seems that most devices and music players can sufficiently power the T10i.

There is no question of the drastic differences between the T10i and your average Apple ear buds: When you hear the T10i there is no going back to a stock ear bud of any kind. Each and every single area has been improved upon whether it be build and durability or audio representation.

My point of reference for this review was the Phonak Audeo PFE 122 in ear monitor. This particular ear piece was designed by a company who were originally catering for people with impaired hearing and the sound signature of the Phonak is extremely neutral. The two ear pieces are similarly priced (or at least they were when the PFE 122 was released for $250 dollars). When it comes to sound, however, the T10i is a different beast altogether. It is far more bass heavy and slams with added force but does not just deliver more power. I also feel the bass texture on the T10i is more defined. This is especially noticeable on tracks like Peter Gabriel’s “Sledgehammer”, where the bass, drops lower and has a well-established shape as opposed to the PFE 122’s bass where at times it can feel slightly unengaging. Both earpieces have good detail retrieval but this is easier to pick out with the T10i, although the PFE 122 gets very close with the right filters. The mid-range on the T10i is warmer and has a buttery presentation whereas the Audeo is clear with nothing really added. As for sound stage, the T10i wins by a slight margin, being able to push sounds out slightly further to the left and right. The upper mid-range and treble are much better on the T10i; there is less roll off and slightly more extension which creates more of an airy sound than that of the PFE 122.

I found that I liked to listen to the T10i’s more so with rock music than any other genre. RHA’s in ear headphones lends itself nicely to albums like Karinvools “Sound Awake”. The extra bloom in the bass and softness of the lower mid-range create a satisfying colouration. On the track “It’s a New Day”, I could hear the echo bounce from the walls in the room as the drummer’s sticks hit the toms and snare, I became aware of the shape of the room and the microphones used in the recording process. Guitars were most impressive with this recording; the upper bass and smoothed mid-range added a chunkiness that I like when listening to guitar sounds on record. Vocals also open up very nicely in this track and I could really sense the control and pitch of Ian Kenny’s voice through the T10i’s.

I believe that RHA have set an incredibly high benchmark in creating the T10i; the build quality and accessories that you receive with this earphone at its price point are outstanding, from the stainless steel mouldings to the assortment of ear tips, removable filters and noise reduction technology. As a listener who has had doubts about IEM technology, I can safely say that anyone thinking of purchasing this headphone will be impressed, especially if you are coming from stock ear buds. I have developed a new found respect for in-ear monitors in general and look forward to hearing many more in the future.