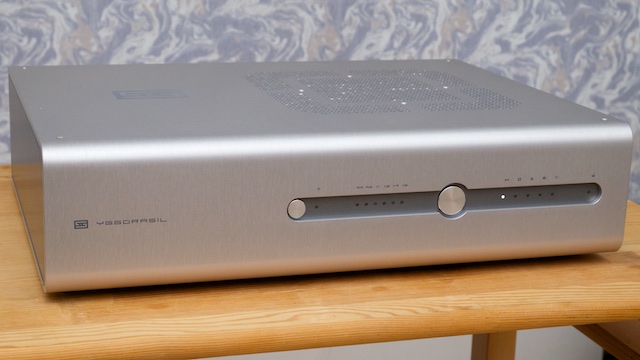 A DAC is often the most difficult component to decide on when completing an audio system. It can seem daunting if for no other reason than that there are so many options to consider. From chipsets to transformers, circuit boards to analogue boards and from digital displays to fit and finish. The staggering amount of variation that exists soon becomes overwhelming. However, in the last couple of years, a handful of products have immerged that are exceptional. The likes of the Chord Hugo, Bricasti M1, Lampizator Big 7 and Schiit Audio Yggdrasil. All of these offerings are considering ground-breaking, but the one that stood out for me was the Californian made Yggdrasil.

Schiit Audio is an American company that specialises in designing amplifiers and DACs for headphone enthusiasts. The two founders of the company – Jason Stoddard and Mike Moffat – are well known veterans in the audio industry. Jason’s background can be traced to Sumo audio and Mike is known for his work with Theta digital. This review will mainly be focusing on the work of Mike Moffat in what he describes as the “best DAC that I know how to make.”.

That statement shouldn’t be taken lightly considering Mike’s background in DAC design. In the 1980s, Mike along with engineers at Theta audio were responsible for introducing the world to the first stand-alone Digital-to-Analogue Converter. Their efforts to improve the sound of early CD players by isolating the transport, DAC chip and power supply led them to a product breakthrough in 1988 called the Theta DS Pre. This product, along with others that Theta would go on to design, would eventually work as a blueprint for the Yggdrasil in the years to come.

Taking from design philosophies learned while building Theta products like the DS Pre and the Generation 5 DAC, Schiit Audio decided to keep in line with the isolation of certain components within the machine. There are actually two separate transformers inside the Yggdrasil. One is dedicated to the digital board, and the other specifically for the analogue board.

Taking a closer look at the digital board, the DAC chip used is an oddball of sorts in the sense that it is not usually implemented for audio purposes. The AD5791 BRUZ can most often be found in MRI machines and military weapons development because of its extreme precision. The Yggdrasil uses 4 of these chips at a combined cost of over 400 dollars.

In addition to the 4 DAC chips, Schiit have developed what they call “Adapticlock”, a clock management system which they consider to be the most sophisticated in the world. The Adapticlock “…assesses the quality of all inputs, measures their incoming centre frequency and jitter, and automatically routes the input to the best clock regeneration system.” The Yggrasil also benefits from the third generation of Schiit Audio’s USB input module which ensures the very best USB performance.

There is a lot of talk in digital audio about bit perfect technology. In truth reaching the full 24 bits intact is not possible yet. Starting with vinyl, there are only the equivalent of 12 bits of information at best. Moving up to CD, 16 bits is almost achieved. Resolving any further than this becomes quite a task for audio engineers.

The most common DAC types on the market are called Delta-Sigma DACs. These became popular in the early 90’s as they made it possible to make ever smaller chips whilst also bringing the price down by a huge margin. Delta-Sigma DACs use a common digital filtering process called a Parks McCellan algorithm to reach the perceived full resolution. This technique gets rid of the original sample and uses a series of approximations to reconstruct the original file, but the algorithm is an open form math solution which means the original file is never fully reproduced. Ultimately this means that you don’t actually get any of the original information at the end of the digital conversion process and can never reach 24 bits. In fact the best Delta-Sigma DACs peak at around 19.5 bits.

The Schiit Yggdrasil on the other, with its AD5791 BRUZ, is an R2R type DAC coupled with a closed form filter. This filter harks back to the early days of Theta Audio and retains all of the original samples that Mike Moffat says “…contain frequency and phase information which can be optimized not only in the time domain but in the frequency domain.”, fulfilling Schiit Audio’s digital philosophy of “retaining the original samples all the way through to the output”. Thus, Schiit Audio have managed to create the world’s first closed form filter multibit R2R DAC that can attain 21 perfect bits.

The Yggdrasil offers every kind of input from AES/EBU XLR, to optical and coaxial S/PDIF and USB. It also ensures 24/192 resolution for all of these connections. When plugged in there is a lighting panel along the front. The Yggdrasil automatically recognises the polarity of the incoming file but this can also be manually selected by pressing the large circular button placed at the centre of the DAC.

The Yggdrasil’s chassis is designed in a way to cut manufacturing costs which allows them to prioritise finances on the materials that matter the most. Schiit Audio have developed a somewhat unique way of producing metal chassis. The metal adopted for this purpose is aluminium. To start with they grain the aluminium as a flat sheet. Afterwards the sheet is bent, anodised and screened. Unique tools are needed to achieve this without scratching or cracking the metal during the bending process so that in the end just one sheet of aluminium encases the entire unit.

Some of the DACs that I have heard in the last 3 years include Arcams IRdac, Eximus DP1, Arcam FMJ D33, Chord Hugo, Bricasti M1, Lampizator Level 4 and Big 7. These were all products that I auditioned in search of a companion for my Woo Audio WA5. In my opinion the Yggdrasil bests them all with the exception of the Lampizator Big 7.

Last year I reviewed the Chord Hugo and at that time it was the best DAC that I had heard. It amazed me at how natural it could sound at both high and low volumes. It was nearly perfect because it had this ability to sound like an analogue system (think high end vinyl) but unlike vinyl it retained detail in spades. The Yggdrasil is similar in this way and has absolutely no dryness in the midrange and treble regions. When I compared the Hugo and Yggdrasil I found the Hugo to be slightly more abrasive, less life like and more two dimensional.

The Yggdrasil has an amazing way of reproducing the sound of three dimensional space. This quality is most evident in acoustic recordings such as the Belcea Quartets 2013 recording of Beethoven: The Complete String Quartets. This recording that is exceptionally well made and a perfect test for the Yggdrasil. Naturalness in tone is incredibly important for chamber music like this. The cello and violin were presented by the Yggdrasil in ways that I had never heard before. The speed and attack of Corina Belcea’s bowing on these pieces was astonishing! Every minute detail is displayed wonderfully – the contact of each bow on the string and the reverberations through the sound hole are perfectly captured. There are other elements to the recording that become far more apparent with the Yggdrasil. Breaths taking by the four musicians and movements of the arms and feet are all amplified creating a much more intimate listening experience. It is even possible to hear the clothes that the players are wearing as they perform – movements of the sleeves and trousers! I also got a sense of the size of the concert hall, echoes of sound and microphone placement were precisely picked up which easily created images of the depth of the hall as the sounds are reflected from wall to wall.

Some of the advantages to having a high end DAC are the improvements in acoustic queues, imaging, soundstage depth, timbre and tone. Generally when you move up in price these are the kind of highlights that become obvious and most DACs from $1500 up will give you this. What sets the Yggdrasil apart from all these is its ability to punch above its weight and reach far beyond its price tag. In my opinion it surpasses similarly priced DACs like the Eximus DP1, Chord Hugo and Arcam FMJ D33. It seemed superior even to DACs like the Lampizator Generation 4. The Yggdrasil’s advantages in price to performance peak at around the level of DACs like the Bricasti M1 which is an unbelievable achievement when you consider that the M1 is 3 times the price of the Yggdrasil.

One of the crowning achievements of this DAC is how it can take regular CD quality (Redbook) recordings and squeeze every last drop of detail from them. I was floored when I went through my old rock collection. Albums like King Crimsons Lark’s tongues in aspic and Pink Floyds Division Bell were incredibly enjoyable to listen to. An album that really stood out over the last couple of weeks was Little Feats – Dixie Chicken. This is a record that I never considered a favourite or even well recorded but it seems I was wrong. Through the Yggdrasil it was nothing short of jaw dropping. My experience with the Yggdrasil and this album made me rethink my whole music collection. I started to enjoy albums that I just wasn’t interested in before. Albums like The Blue Niles – A walk along the rooftops and Talking heads – Speaking in tongues.

The Yggdrasil sets a new benchmark in price for performance. I believe that it is the best DAC on the market for the money. It may well be the best DAC under 5000 dollars! I spent nearly two years searching for a DAC to finish off my system and when I heard the Yggdrasil it was an easy decision to purchase. It has surprised me at every corner and I am still finding hidden gems in my discography even months later. At 2399 dollars this DAC is a steal which is something that I thought I’d never say.