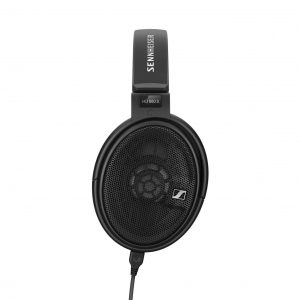 In the last decade, the amount of new companies in headphone audio is staggering. More and more join the ranks each year. But today, we visit one of the industry’s most established and renowned companies; they are Sennheiser and they need no introduction. It’s a name known throughout the entire world for quality, and precise German engineering. Such as you would think of Italy when the name Ferrari rolls off your tongue, Sennheiser is undeniably one of the gems that Germany has given the world.

Today, we are met with an upgrade to none other than perhaps the most famous Sennheiser headphone of all time, the HD 650, which today is still known for its legendary performance. Nay, this isn’t just a headphone famous in the lineup but perhaps the entire industry. It was released late 2003 and now, 15 years later, the legend continues with the Sennheiser HD 660S.

The primary differences from the previous HD 650 are a new transducer, lower impedance, new outer mesh grill, and different cabling options. It’s priced at $499.95 like its predecessor. The largest difference for buyers will be the new driver. Sennheiser claims that this new driver, which uses precision stainless steel fabric, offers “improved control of the diaphragm movements” which will “ensure the highest impulse fidelity”.

A quick glance behind the new grill with the stamped Sennheiser logo on it confirms this new wrap. The fabric looks like a thin mesh on top of the transducer akin to the fine mesh filter you’ll find on a high-end liquid filter. The central cone of the diaphragm appears to be visible behind the mid-point of the mesh.  The HD 650 had a small foam dampener in that position.

The second largest change would be the new impedance of 150 Ohms down from 300 Ohms. It’s mentioned enough times on the product page that we know this change is significant to them. The 660S has a sensitivity rating of 104 dB at 1Vrms whereas the 650 is 103 dB at 1Vrms. A non-scientific test showed that with a static volume output on my amp, the HD 660S was louder albeit by a small margin.

Sennheiser mentions it on the third sentence of the intro paragraph with “ Thanks to its lower impedance, it delivers reference-class sound also when connected to hi-res mobile players, thus offering much greater versatility”. It’s also mentioned again in the Supreme connectivity blurb on the website when discussing the cables. I’ll get back to this in a bit.

Two cables come with the HD 660S to provide “versatility” to its users. One is an unbalanced ¼” cable while the other is 4.4mm balanced. Both are approximately 3m long and can stretch across a small room without issue. An additional ¼” to 3.5mm flexible adapter is included in the box.

I find Sennheiser’s marketing on the lower impedance and its versatility to be conflicting given the cable options. It mentions the lower impedance to better jive with hi-res mobile players twice on the website meaning that this is a selling point they want to push. Yet the two cables that are offered are both almost 3m long and terminated in connectors that are non-standard on portable DAPs. The included 4.4mm balanced connector is gaining support in 2018 but is still a rarity, not to mention its also of massive length like the ¼” cable. Sure, it comes with a ¼” to 3.5mm adapter but this puts strain on the DAP jacks and reduces portable usability.

Aftermarket cables for the HD600/650/660S are a dime a dozen but I still found the choice of cables to be weird. Especially as the original HD 650 only came with the single ¼” cable and adapter. Sennheiser bundling an extra cable terminated in balanced 4.4mm, which is more popular on portable DAPs than desktop setups, yet still making it 3m long is puzzling. In essence, the HD 660S doesn’t come ready out of the box to be used (comfortably) when “connected to hi-res mobile players”. Thankfully, the removable cable system is dead simple and custom cables are plenty and affordable.

The Sennheiser HD 660S has a similar sound signature to the original HD 650 but with differences. We still have the same smooth delivery but the “veil” has been largely lifted this time. The 660S is more active in the mids with sharp and quick production. It still has the sensation of being pulled back but with a trick to it; there’s a bump as it pushes forward in the mid-range. There’s an edginess to the sound of the new HD 660S and it changes the game; songs that were almost there in the past now find themselves at home.

Listening to “Thanks to You” by Boz Scaggs from The Essential Boz Scaggs was a treat. It’s marked by a heavy bass line, light percussion with cymbals in the rear, and an overwhelmingly strong frontal mid-section. You are immediately met with a lightly textured low frequency rumble with just enough quantity to keep the song balanced. Whereas the mid-bass section was more accentuated on the HD 650, the 660S fills up the rest of the low range more evenly making it seem stronger.

The vocals in this song were complemented greatly. Known for buttery smoothness, the HD 660S not only doesn’t disappoint but one ups its younger brother. It imparts a more direct vocal energy at the listener; the artist sounds stronger and clearer. Boz Scaggs is known for the energy he delivers in his performances and the 660S follows him word for word keeping up pace with his speed and tenacity. The mid-range is no longer puddles slowly shifting about in a lake but rather a strong tide as it disturbs the water’s surface and makes its presence known.

Next up was “Sara” by Fleetwood Mac from Tusk. This song has a plethora of concurrent instruments playing in the background with various levels of presentation and space backed by the lead female vocalist. The instruments in the background have great separation and individual clarity but without being spaced out too far.

One of the strengths of the 660S is its ability to provide a wide soundstage while keeping its interior elements constrained to sound natural. I often find headphones without positive control of their soundstage leaving instruments in disarray. The HD 660S has none of these issues and performs real-time magic as it both coordinates the action and spacing of the individual elements.

Lastly, I put on “Flower Dance” by DJ Okawari from Kaleidoscope. It’s a pure instrumental song with a piano and backing by string instruments. The immediate thing I noticed was that it got the background and transparent feel correct. The song is melancholic with tangs of loneliness and the HD 660S captured this with the sensation of a near endless expanse past the headphones. It’s the ultimate ability that an open headphone can try to capture.

However, it is here that I noted that the sound’s new peakier mids is like a double-edged sword. The piano arrangement was sharper than I would have liked and was pushed forward to a degree of being uncomfortable. It was here that I started looking backwards at the HD 650 which, although plainer, was more balanced with the intensity of each section. It instead allowed a more even split across the board and was a quality coveted by audiophile’s over this last decade.

The HD 660S is quintessentially balanced and decidedly cohesive in its sound signature. It hits the right notes and separates sonic elements at just the right distance and depth. It offers less transiency as the notes fling on by this time around, but rather seeks out a more energetic approach to the handling of its mid-range. It’s livelier, faster, but also brighter as well; sometimes to its detriment.

Overall, the Sennheiser HD 660S represents a stronger, and arguably better version of its predecessor, the HD 650. It retains the smooth signature but imparts more spirit into it this time around. This change isn’t for everyone, but I found it for the better as it gave songs and genres that previously needed that oomph the ability to shine; it was that little bit that was missing that the 660S brings to the table.

The legend continues, but this time transformed, just like the 660S has changed, as the torch is passed. The HD 660S diverges from the path carved out by the HD 650 ever so slightly and that has made all the difference. A new legend starts today.