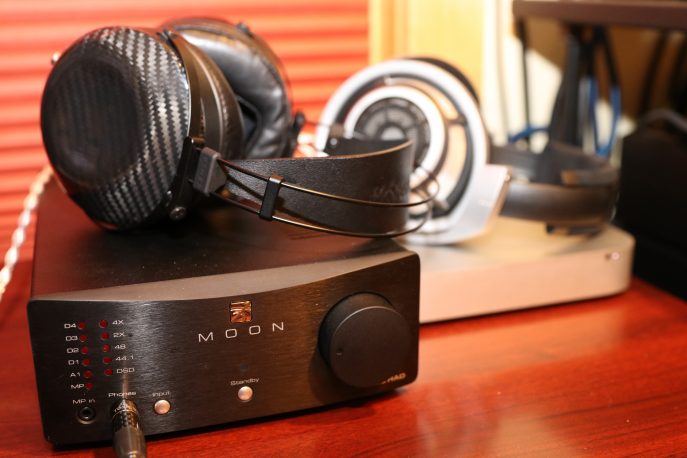 Simaudio Moon surprised everyone at the 2014 CanJam at Rocky Mountain Audio Fest. The launch of their flagship Moon Neo 430HAD Headphone Amp/Dac was totally unexpected. Partly because the firm had never focused on headphones before this launch and that their initial effort was immediately one of the top two or three solid state offerings available in the headphone world. It was quite the coming out party! After reviewing the 430HAD I bought the review unit and it has been a central part of my gear since then. Anyone who balked at the 430HAD’s flagship price tag ($4300 with add-on DAC card) now has the option of the 230HAD at a more affordable $1499 USD. Good things do come to those who wait!

As is the case with the 230HAD’s big brother, the 230HAD is a Pre-Amp, DAC, Headphone amplifier that can drive most headphones with exceptional aplomb. It can be the center piece of a digital system, offering four digital inputs; 2 S/PDIF’s, 1 Toslink and 1 USB as well as a single RCA analog input. It will serve up most signal options necessary to price conscious headphone fans and quite a few two channel aficionados as well. The handsome compact design allows placement on a desktop with plenty of room to spare as the 230HAD takes up half the space of its bigger sibling.

Little brother gear always leads to the question of what was left out to deliver the more affordable price point. Balanced inputs and outputs for a start. The 230HAD is a single ended unit. It is also not as powerful so a handful of hard to drive flagship headphones may not pair well. In my experience though, the clear majority of headphones will be driven with ease. The 230HAD also offers only one gain option vs two for the 430HAD. Beyond these differences and some minor specification reductions the 230HAD offers up a significant portion of the larger 430HAD’s performance at a bit over one third of the price. A true bargain hunters delight!

When the 230HAD arrived, I set it up to burn in for the recommended 300 hours before settling in for critical listening. Digital files were sourced from a Mac Mini and Roon or an Oppo BDP-105D. Cables were all AudioQuest including an AudioQuest Diamond USB cable. Initially I set up the 230HAD as a two-channel pre-amp in a small system connected to the PS Audio BHK 250 stereo amplifier and a pair of KEF LS50 bookshelf speakers. The 230HAD acquitted itself beautifully as a pre-amp handling the source inputs with no issue. The smooth volume control offered exacting control allowing for fine volume control. Sonics were well defined. Spacing and positioning were spot on and almost three dimensional. Listening to Van Morrison’s Crazy Love from Moondance (1970 Warner Bros. HD Tracks 24/96) the song was presented with great clarity. Guitar was crisp and clean. The bass line was firm and well defined. A strong no apologies presentation.

Moving on to headphones I selected my Sennheiser HD800’s and queued up Maroon 5’s Misery from Hand’s All Over (2010 A&M/Octone CD Rip 16/44.1). The HD800’s accepted their energetic handoff from the 230HAD and had my toes tapping. Action was happening all around me as the song filled the space with first class sonics. Guitar was crisp and twangy (Is that a word?). The bass line was solid and moved the song along with bounce and authority. Drums had that crisp “snick” of the stick head meeting drumhead and cymbals crashed with the shimmer of a live performance. I had to run through a couple more songs on the album as the presentation was infectiously fun.

My favorite headphones with the Big Brother 430HAD is the Audeze LCD-X. Plugging them into the 230HAD and firing up Sting’s It’s Probably Me from Ten Summoner’s Tales (1993 A&M CD) I was impressed with the solid and well defined bass line. The click of the hardwood was not only distinct but highly positional, located behind and to the right of Sting. The High-hat of the drum set shimmered beautifully. This song has a variety of other percussion and their use defined the recording space in a clear and interesting manner. The 230HAD kept everything together. At no time did the sonics become confused or muddy. It was a perfectly executed presentation.

Moving on to the AudioQuest NightHawks I pulled the Scorpions’ Kicks After Six from Crazy World (1990 Mercury CD). The NightHawks have an exceptionally well balanced presentation. The 230HAD fed them a solid dose of hard rock and the NightHawks responded with great energy and solid head banging fun. Once again, the bass delivered by the 230HAD was full without becoming muddy or out of control. High frequencies from the electric guitar solos was pure and not shrill. Once again, I ended up listening to the entire album. From a price perspective, the AudioQuest NightHawk headphones are a great pairing with the Moon Neo 230HAD. Both pieces offer terrific value and the combination is highly compelling.

Wrapping up with the MrSpeakers Ether-C’s (My favorite closed headphone) I selected a brand-new song (Released today) Lorde’s Green Light (2017 Universal New Zealand Tidal). Lorde utilizes judicious amounts of subsonic bass and the 230HAD delivered it in spades via the Ether-C’s. This very interesting up tempo break up song is very well engineered. When the full album is released I expect another top seller for the Kiwi songstress. The space between the instruments existed distinctly and that defined the presentation. The Ether-C’s extraordinary clarity even more outlined the song’s harmonies when paired with the 230HAD. The 230HAD has about 15-20% of the amplifier output of the more powerful 430HAD. Yet with each of these headphones I was listening at ¼ volume and the music was plenty loud. Users of the Abyss 1266 or the HiFiMan HE-6 may need to test before buying. For basically every other headphone the 230HAD will provide plenty of clean well defined sonic bliss.

The 230HAD occupies a very competitive space. Several highly-accomplished manufacturers including Questyle and Ayre have exceptional offerings in this price category. Simaudio holds its own against all comers. The 230HAD has a rightness to its presentation that allows for untold hours of effortless listening enjoyment. Whether you are doing critical listening to audition that new pair of reference headphones or simply wish to get as deep into your music as you can, the Moon Neo 230HAD will be your guide to your own private audio nirvana. Highly recommended!

Cons
No balanced inputs or outputs