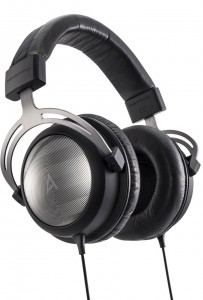 So, in life, we all have to make compromises. My wife and I have two children and when our second child was born, I had to trade in my Pontiac GTP with a Supercharger for a Toyota Sienna minivan. When our first child was born, I needed to find an alternative to my 2.0 speaker setup so I wouldn’t wake her in the early evening. So I purchased a pair of Grado SR-80s and the rest, as they say, is history.

When there’s a lot of hustle and bustle around the house, I find that a good pair of open backed headphones won’t cut it. As well, when I’m on the go, people around me certainly would not appreciate someone sitting next to them with an open pair of headphones and AC/DC blasting through. Thus the need for a good pair of closed backed headphones. Now, while they are not cheap at $1399, when compared to other top of the line closed headphones like the Fostex TH-900s or anniversary edition Audio Technica W3000s, the AKT5p’s are in-line with the competition and performance-wise are also right up there (more on that later).

But as I mentioned above, in order to gain something (like more room with a minivan or quieter audiophile experiences with headphones over speakers), one does have to make sacrifices. Like their name states, closed headphones typically sound more “closed-in” when compared to their open-backed brethren. They suffer from more inner resonances due to the sound waves bouncing off the ear-cups and also tend to fall behind in transparency and accuracy. I’ve owned many closed headphones through the years; some quite good and others; well, let’s just say they’re no longer with me. I don’t want to say that I had limited hopes when the Astell & Kerns / Beyerdynamic AKT5p’s arrived, but I think somewhere in the back of my mind, my expectations were tempered because they are closed-backed headphones.

The Astell & Kern / Beyerdynamic AKT5p is a collaboration between two great audiophile companies. Beyerdynamic has been around for approximately 91 years, so it’s certainly no Johnny-come-lately. Astell & Kern is a highly respected portable Hi-Fi company that has brought us the well renowned AK240 portable player. I reviewed the most excellent AK100II. I was so impressed with the AK100II, I purchased one myself. So the portable Beyerdynamic T5p was a perfect fit for the line-up of the Astell & Kern portable players. So both companies got together and collaborated to develop the AKT5p. Not only was the sound re-tuned and output impedances re-adjusted, but the headphones themselves were modified to allow for them to be used in balanced mode to work with the Astell & Kern DAPs from the AK100II right up to the AK240. Adapter cables are included to use them in standard unbalanced operation (1/8” or ¼” standard headphone plugs). When paired together, the Astell & Kern players have a full sized closed-back headphone option that works for them by design. And after a few weeks with this combination, I can say that this pairing is incredibly special and has changed some of my pre-conceptions about closed-back headphones.

For the purposes of this review, I ran the AKT5p’s with my Astell & Kern AK100II in both balanced and un-balanced mode and with my main desktop setup: HeadAmp GS-X Mk2 headphone amplifier à Metrum Accoustics Hex DAC. For my desktop setup, I

used both CDs played through my Cambridge Audio 650C (fed into my Hex DAC via SPDIF) and high resolution music through my Amarra 3.0/iMac via USB. I ran some of my standard test tracks, but also included a few new ones as I wanted to see just how the AKT5p’s performed with different genres and types of music.

Build-wise, the AKT5p’s are very reminiscent of the original Beyerdynamic T5p headphones with some modifications to the cabling to allow for balanced operation for the Astell & Kern portable music players. As mentioned, the 2.5mm balanced output comes directly from the headphones and can be mated with a 2.5mm to 3.5mm adapter for unbalanced operation out of one’s iPhone or Android products. The ear-cups are now embossed with an “A” to denote Astell & Kern; while the headband still sports the “Beyerdynamic” logo.

My first listening session involved using my Astell and Kern AK100II portable player in balanced mode with the AKT5p’s. Right away I could tell that great care was put into this pairing as the naturalness of the music just really flowed from the recording. First up was Joel Plastett’s “III”. This recording has really grown on me through the years. I love to support Canadian artists and Joel’s “III” is wonderful mix of electric and acoustic rock/indie rock. With over three full CDs, it’s got both quality and quantity. Using this album in Apple Lossless format over my AK100II was a pure joy. The first thing that immediately grabbed me was just how natural and balanced these headphones sounded. Traditionally as I’ve mentioned closed headphones can still sound quite enjoyable, but in my travels, they’ve almost always lacked in naturalness and openness when compared to open-backed headphones. Thankfully, the newly tuned AKT5p’s take a very big step forward in correcting this generalization. I would definitely classify them more as a neutral headphone than a fun sounding headphone. The bass is slightly more than dead neutral, but not overly so (as with say the Fostex TH-900s or Denon D7000s), but it offers a very natural and balanced approach that is both enjoyable and accurate to the recording. Conversely, the treble like so many other closed headphones isn’t overly portrayed and emphasized. It is very well extended; while never being bright, nor strident. I found the open version beyerdynamics T1 could be this way at times, and they are an open headphone (though officially beyerdynamics lists them as “semi-open”, I suppose this is like semi-pregnant?). Joel’s vocals were upfront and present and did not take a back seat to either the treble or bass. Listening to these headphones was a pure enjoyment. I never once thought I was settling for having to use closed-back headphones as the music was ever so clean and natural.

The bass was in a word: exquisite. It was deep (as my frequency sweeps down to 20Hz confirmed), detailed and lively. What it was not was: overbearing, lingered more than necessary, or leaked into the mid-range. Of all closed back headphones I’ve trialed, reviewed, or owned, the AKT5p’s bass quality was right up there with the very best (along side the Audeze LCD-XC and Fostex TH0900s), but unlike the others, it offered bass that was the closest to “neutral” to my ears. The biggest issue I had with many other top of the line closed headphones are the upper-mids/treble. They can be overbearing at times as inner reflections in the ear-cups of the headphones can overly emphasize certain frequency ranges. The AKT5p’s avoid this trap and offer treble that is highly detailed and

extended while never causing the hairs on the back of my neck to stand up. To note, this was one issue I had with the original T5p’s by beyerdynamics and thankfully the re-voiced AKT5p’s have fixed this completely.

Next up was Jazz at the Pawnshop 2. This is the sequel to the very highly respected audiophile recording of Jazz at the Pawnshop. For this session, I used my desktop setup (Cambridge Audio 650C CDP à Metrum Accoustics Hex DAC (balanced outputs) à HeadAmp GS-X Mk2 headphone amplifier to run the AKT5p’s through their paces. Again, the AKT5p’s definitely continued to impress. What truly sets these headphones apart is just how open they sound. The resulting sound scape was closer to what open headphones can portray; while still offering me excellent noise isolation (and very little leakage to the outside world). The sense of air and space is truly class leading for closed headphones and again, I never once felt I had to sacrifice this openness for the noise isolation that closed headphones can supply when needed. The inner micro-details were very realistically portrayed. They weren’t overly pushed into your face, nor where they so far removed that they were difficult to make them out. Instead, I got an overall satisfying mental picture of the Pawnshop that was as close to life like as I’ve heard (with open or closed headphones). Cymbal shimmers were eerily real, the whispers of the crowd were enveloping and the overall sense of being there was outstanding.

The construction is very similar to both the beyerdynamics T1 and T5p. They are very solidly built and quite comfortable on the head. What I did find though is that the AKT5p’s didn’t extend the ear-cups down as far as the T1s. As a result, I had to have them fully extended and they just barely made it below my ears. While I’ve got a large-ish head size, a few more “clicks” would have been appreciated. As well, while they sound tremendous out of portable devices like my Astell&Kern AK100II or even my iPhone 6, they aren’t the most portable headphones I’ve come across. If the ear-cups could have rotated 180o and laid flat, then they could sit in a portable headphone case and been easier to take with you on the go. However, the finish and build quality of the AKT5p’s is outstanding and very much in-line with headphones in this price-range.

In conclusion, I find the AKT5p’s a wonderful addition to the market as they are certainly unique when compared to the other closed-back top-of-the-line headphones. You no longer have to sacrifice a neutral/balanced sound signature, nor do you have to give up on sound-staging in order to have headphones that can isolate you from the outside world. Their build quality is top shelf, as is the comfort level that they provide. I used them for several hours at a time and never once felt any pressure points that became fatiguing. If you are looking for a great pair of natural sounding closed headphones with above average isolation and comfort, then I can highly recommend the Astell&Kern AKT5p’s!