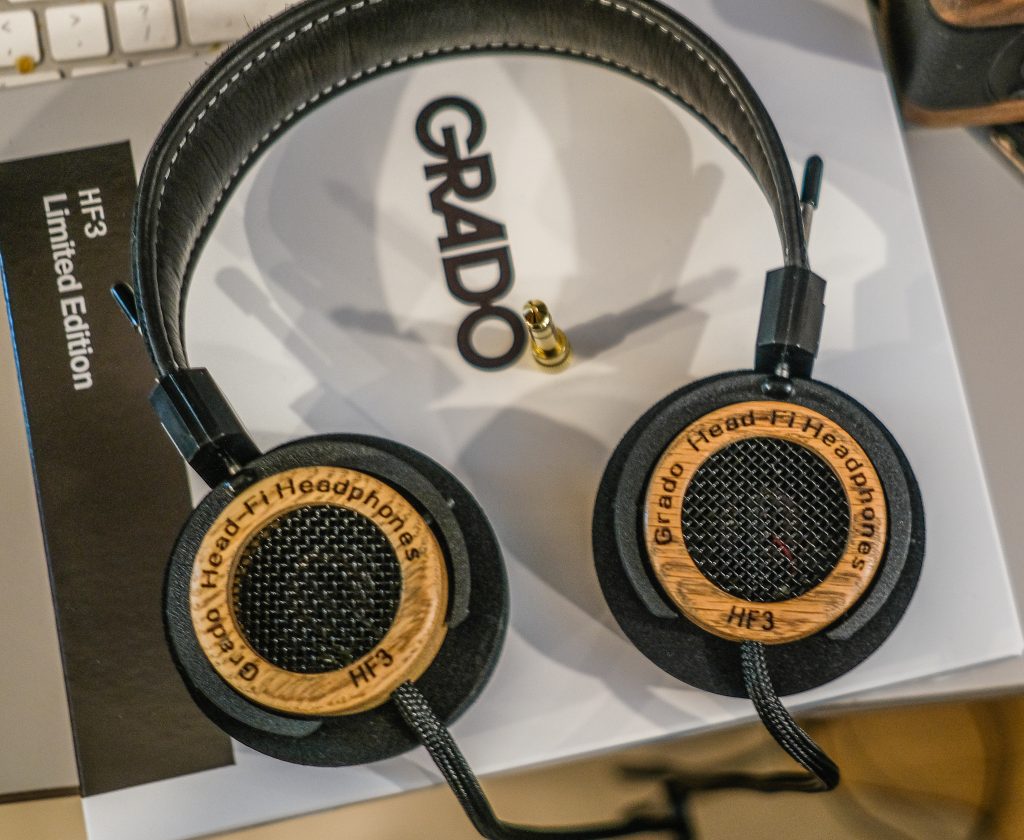 The Headfi.org community has long been a fan of Grado headphones. Jude Mansilla and the Grados have a  relationship dating back a few years with two prior limited edition headphones which helped Jude purchase new servers for the HeadFi website and help the community grow while giving members access to a terrific headphone that has sensational sound quality, a win-win for both Head-Fi and the community.

The HF3 continues the tradition with a limited edition model designed and manufactured in Brooklyn and designed by John Grado.  Priced at $350, with $100 of each headphone sold going to a charity that will be determined by Jude Mansilla and John Grado, the HF3 is available for purchase at the official Grado online store located here: https://www.4ourears.net/hf3_p/4e-hf3.htm

Grado chose to use a CNC machined Red Oak wood housing for the design which incorporates their proprietary 2 step curing process for achieving correct tonal balance.

The driver is Grado’s latest 44mm driver tuned to match the wood housing perfectly. Grado has introduced new wiring for the HF-3, which has a braided sheathing improving both sound quality and flexibility.

The headband is stitched in white over the black headband. The earpads are the Grado L shape cushions.  The $350 price includes free shipping and a donation of $100 in the name of the Head-Fi community to a charity to be named.

Additional accessories offered include the $34.95 hard-shell travel case and new and exclusive to the 4OurEars Grado authorized web-store is a beautiful Mahogany storage box offered at $125 which will be discounted $25 if purchased with the Grado HF3 and there is also a $5 discount for the travel case as well if purchased together with the HF3.

Using the Auris Euterpe tube headphone amplifier which incorporates the latest ESS DAC chip as my prime listening source for evaluation, I put the HF3 on and started streaming from my Roon library. Setting the input selector to the low setting on the amplifier, I immediately noticed while listening to Taylor Swift’s “I Forgot you Existed” from her new album “Lover”, the sound was dynamic with excellent speed and transparency.  Her vocal was clean and sounded articulate without any harsh sound in the vocal presentation. I could hear her voice clearly and the sound was sibilant free and her beautiful vocal sounded lifelike and articulated.

Tanya Tucker’s new album just released “While I’m Living” brought back a country legend and on “The Wheels of Laredo” the staging came alive with musicians around Tanya and her location was front and center on the stage with razor-sharp imaging. The musicians on the stage were all defined in their own space and there was air and ample space between them creating an outstanding soundstage. Amazing for a headphone in this price range was the ability of the HF3 to recreate space with imaging that was breathtaking.

Listening to Jeff Buckley’s “Hallelujah” written by Leonard Cohen and recorded in 1994 is legendary.  The track, that is one of the most beloved recordings of the song ever recorded, showcased the immense talent of Jeff Buckley. The HF3 presented an incredible soundstage with this recording and once again the imaging was nothing short of spectacular. Jeff’s vocal was crystal clear and haunting while he sang the lyrics. I could feel his presence while listening and the sound of his guitar was vivid with excellent body.  The performance was lifelike and captured my attention and let me focus on the music.

Listening to the recording sensation Billie Ellish on “When We Fall Asleep, Where Do We Go” the track “bad guy” is indie-pop at its finest. The electronic beat on this tune has outstanding bass lines and the fast driver of the HF3 did not omit anything in the bass region nor disappoint with its excellent texture and slam.

The fast driver had exceptional speed while delivering a balanced presentation and highlighted the bass lines but also showcased a clean and extended treble without glare or any harshness. Billie’s vocal was in the mix in her own space with excellent precise imaging.

Nils Lofgren’s “Acoustic Live” is a well-recorded live performance from the legendary guitarist known for his work with Bruce Springsteen’s E Street Band. On “You” I could hear the acoustic guitar with great detail.  The detail and body of the instrument was vivid and alive. The tonality of the instrument was beautifully recreated and the HF3, once again, was impressive with what it was able to extract from the recording.

The new recording of the “Lion King” has some exceptional layering of musicians on “the Circle of Life” and once again the HF3 did not disappoint. I could hear easily the layering of the stage with each musician in his or her own space. The layering was spot on and had a 3D soundstage much like I had heard in the movie theater on the large screen.

Turning the volume up on the Euterpe the soundstage was immense on this little wonder and I could hear clearly the beautiful instrumentation in layered sections, even at louder than normal listening levels (not recommended) never did the HF3 falter and the extension seemed endless.

The imaging remained sharp and focused and the layering of the stage never collapsed while recreating the performance flawlessly. The sound was breathtaking and the HF3 once again captured the spirit of this wonderful recording.

The second track “Life’s Not Fair” by Hans Zimmer once again captured the beautiful instrumentation of the electronic instruments with finesse and never omitted any part of the performance. The beautifully composed tune had a deep and immense layering of the soundstage.

The sounds of the stage in this track are immense and the HF3 once again delivered the performance without a hitch. Impressive and at times majestic the HF3 did not disappoint in making this tune come to life.

The Grado HF3 Limited Edition Head-Fi is a sensational headphone destined for greatness. The beautiful midrange was classic Grado. Impressive to look at was the beautifully crafted red oak wood housing which contributed to the exceptional tonality and transparency.

Vocal recordings from both male and female singers were always sibilant free. The clarity of lyrics were transparent and the HF3 made the vocals come to life with a life of their own.

The bass lines were explosive at times and while not a bass head headphone the textured bass was always deep and never made me feel as if I was being cheated while listening. All electronic recordings I auditioned sounded excellent and the HF3 never faltered in its delivery of the recording.

The treble was never harsh or grainy. The sound of the treble was extended with a pristine transparency, never irritating, and always musical. While listening to horns and triangles, I was impressed at how lifelike the delivery was and extension in the upper region soared and seemed endless.

Soundstage lovers will be impressed with the immense soundstage. The HF3 has exceptional imaging with pinpoint focusing and the ability to create space for each musician within the stage. The space and air between performers is outstanding, especially for a headphone so reasonably priced.

While listening to bands or symphonies I continued to be impressed with the depth of the stage and the pinpoint focusing. The HF3 delivery was special and made me want to listen to more large scale recordings. I found myself searching for the best classical recordings in my library for the long listening sessions.

Impressive was the HF3 ability to extract detail from the recordings, a good example being the end of “Hallelujah” in the Buckley recording. Jeff’s vocal at the end keeps soaring and he holds the notes for long periods of time and it is an exceptional demonstration of his ability to use his voice as an instrument.  The HF3 was able to capture the entire performance and never faltered. The performance was close to reference caliber headphones at a fraction of the price it continued to impress me.

John Grado once again has come through with another opportunity for our members.  $350 gets you a world-class headphone that is beautifully constructed and sounds sensational. The soundstage on this little wonder is nothing short of amazing at any price let alone one priced so reasonably.

Please remember $100 of the price is going to a charity to be named by Jude. If you’re looking for one headphone that is comfortable for long listening sessions and can be taken anywhere, the HF3 is your ticket. The exceptionally balanced design is beautiful to look at and creates a sensational listening experience. The fact that it is a limited edition makes it a collectible that should be in everyone’s collection.

Rarely do we see new limited edition offering with Head-Fi come along. Being a part of the community over the years I am excited to have the opportunity to own this collectible. Bravo to Jude and John for bringing another exceptional product from Grado that is sensational to look at and makes music come to life.  The HF3 deservers your consideration and is a must buy in my opinion. Highly Recommended.