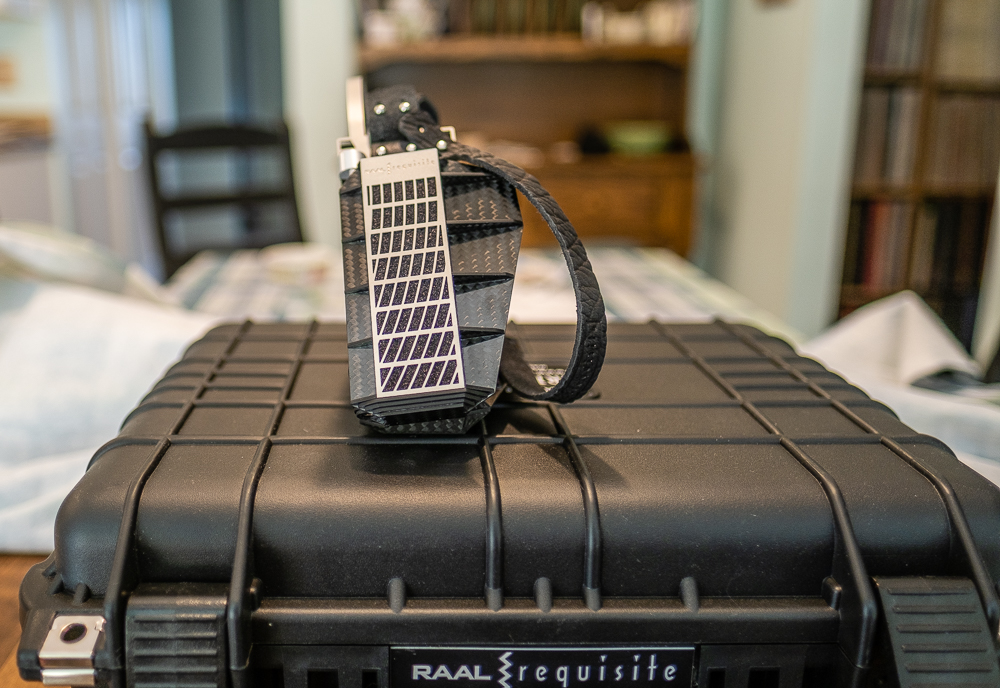 Have you ever wondered what it would be like to listen to a speaker on your head? Audiophiles for years have been seeking ways to remove the room acoustics from listening rooms without compromise. Speaker listening in a room is always challenging because of the interacting components with the room. There are many room tuning devices that help recreate but not eliminate room interaction and some may even contribute to the poor performance of the gear.

Danny Mckinney a co-founder of the RAAL-requisite SR1a Earfieled Headphone Monitor has been listening and working on ways to address the issues and came up with a fantastic solution.  Since 1995 Danny has been designing ribbon microphones and other pro audio gear for recording studios and musicians. Working with superstar recording artist Alison  Krause (all-time Grammy leading artist) he designed microphones on many of her award-winning records using the RAAL ribbon technology.

Danny’s tireless efforts have finally come to fruition with the development of the world’s first ribbon EarSpeaker. RAAL a company based in Serbia was founded by Aleksander Radisavljevixc and has been working with ribbon driver design since 1993.  Alek has been designing speakers since he was 23 and has built a reputation for bringing ribbon technology to the highest standards worldwide.

Danny has been working on various projects with Alek and over the years his goal was to design and make a ribbon Ear Speaker thus removing the room acoustics distractions from the listener.

Meeting Danny at the June SoCal CanJam and listening for the first time to the RAAL-requisite SR1a Earfieled Headphone Monitor, I was blown away with the sound. The RAAL was connected to a Schiit Vidar, a $699.00 amplifier that was delivering over 100 Watts per channel to the Ear Speaker.  Once Danny helped set the SR1a  properly on my head and started playing some music I was shocked. The clarity and transparency of the unit made for one of the most transparent headphones I encountered since starting my journey in personal audio.

Heading to London CanJam I remembered my conversation with Danny Mckinney and knew I would see him as he was on the schedule to exhibit at the show.  There were many different products that I saw for the first time in London that were interesting and the electrostatic designs from Warwick and air motion designs from HEDD were some of the new headphones that were impressive and offered exceptional sound and had groundbreaking technology in the new designs.

Danny was there and showing the RAAL SR1a and once again we became reacquainted and the love of the design and sound was still there for me in a big way Sleepy One who worked with me in London to cover the show was assigned the RAAL SR1a coverage and at dinner, he told me I was right in my praise of the SR1a.

He found it to be an amazing piece of audio technology and was one of the best designs he had heard in his 10 years of headphone listening.  Speaking with  Danny he told me he could ship a unit to me for review as soon as the show ended and I would have it toward the end of the following week.  The excitement was building for me for the opportunity to test something truely unique and the unit arrived as promised.

The RAAL-requisite SR1a Earfieled Headphone Monitor is the world’s first headphone monitor with EARfield Technology. The design team in Serbia and Danny Mckinney took years of mastering and mixing experience and developed Earfield technology which removed the room acoustics from the equation and created the world’s first Earfield Ribbon monitor for both personal and studio listening.

Using a true ribbon in the design they were able to reproduce a bandwidth of 30Hz-30kHz and eliminate the need for sealed chambered bass thus allowing for open baffles both in the front and back of the SR1a which created a true full frequency response.

The weight of the Earspeaker came in under one pound coming in at 425 grams. There are many planar designs weighing in substantially heavier and can lead to long term fatigue while listening.

The open baffle design eliminates heat buildup and provides a cool natural flow of music. Absent in the design is the sound pressure against your eardrum that is present in the closed sealed headphones.

The SR1a is handbuilt and uses a stainless spring steel headband and two aluminum ribbon drivers. The inside of the cup uses memory foam bars and making the design comfortable on the listener’s ears. The design is crafted and made in Serbia by European craftsmen who also make the world-reknown RAAL ribbon tweeters.

The unit is packed in a custom Hardcase designed by Pelican. The RAAL-requisite SR1a Earfieled Headphone Monitor comes with a ribbon/amp interface and all cables to connect to an amplifier and is priced at $3499 with a 14-day no questions asked return policy.

Choices and the Music

The RAAL-requisite SR1a Earfieled Headphone Monitor requires the listener to use a speaker amp with a suggested output of 100Watts. My reference amplifier the VPI 299 D tube integrated design uses 4 Gelnelex KT88s and is rated at 40W of high current tube power.

Connecting the amplifier to the RAAL SR1a was easy with the supplied amp box that fits between the amplifier and the monitor adjusting the monitor’s impedance to make it a 5.6-ohm load so it works flawlessly with the amplifier. The necessary high-quality cables are all included in the package.

After my discussions with Danny about the work he did with Alsion Krause what better way to start listening than with “Paper Airplane”  recorded with Union Station and one of the songs that Alison was using Danny’s ribbon microphone.

The room acoustics were not present while listening to this track. The sound was out of my head and the SR1a disappeared. The 299D amplifier was driving them easily. The soundstage well defined and the imaging was sensational.

“Windy City” had Alsion front and center and the band around her in their own defined space and I could hear her voice with excellent articulation of the lyrics but the sound was as if the monitor had disappeared. Never before hearing a full-range speaker on my head it was a new experience in listening and one I will soon not forget.

There was no room interaction present and I was amazed by the clarity of the sound I was experiencing. The midrange was one of the best I have experienced with a headphone or any studio monitor. The SR1A just got out of the way and totally disappeared. The sound was exceptional and loving the experience I continued to be impressed. The SR1A’s imaging was incredible and created a 3D image of .

The Tympani whacks on Copeland’s “Fanfare for the Common Man” were explosive and the thunderous tympani whacks in the finale were all out of my head and the SR1a once again disappeared and created another magical listening experience.

Listening to Argento’s “A Ring Of Time” the chimes are exceptional and complex to reproduce. The SR1a nailed the sound with a clear and articulate sound. The arrangement came together and sounded exceptional and was all exciting and sounded as if I was hearing this performance for the first time.

The RAAL-requisite SR1a Earfieled Headphone Monitor is a crowning achievement of what is possible in headphone design. The beautiful sound coming from the ribbon monitor was sensational. The exceptional imaging made all performers come alive and made the equipment get out of the way.

The SR1a created a midrange that was as good as I have heard regardless of price. The soundstage was wide and deep with exceptional space and air between the performers. The 299D was able to throw off a 3D stage that was sensational. Imaging was among the best that I have heard in any system. The SR1a was so special that at times I felt as if I were actually at the performance.

Bass performance was exceptional. The textured and dynamic bass had a good extension and was able to hit the low bass notes. Reproducing thunderous sound from tympani in large scale recordings was always exciting and made the performance come alive and create a memorable listening experience.

Extension at the top of the listening region made chimes, bells and cymbal recordings come alive. The treble extension soared and was endless reproducing chimes and other high-frequency recordings. I could easily distinguish between a cello and violin and tonality of instruments was accurate and lifelike.

Adjusting soundstage was easy, simply swing the cups open a little to create more space and make the soundstage open up more or listeners can adjust the sound to make it more personal.

The SR1a benefits from high-quality speaker amplifiers. The VPI 229D was impressive in its ability to drive the design without compromise. The $699 Schiit Vidar, a solid-state 100-watt design, was exceptional and offered a small chassis and still was able to get excellent sound from the SR1a.

The prototype amp Schiit is working on for the RAAL-requisite SR1a Earfieled Headphone Monitor will include a DAC and is said to put out 1000 watts of power and will be offered at around $1000. the new design will eliminate the need for the box that RAAL includes with the headphones and has a small footprint making it attractive for Personal Audio listeners that want it on a desktop. The design would also make it more portable for listeners who want to take it and use it other than in your home system.

Is it flawless or perfect? The only issue I had with my time with the SR1a was that I had to adjust the cable in the monitor. The cables did not lock and at times were loose in the connection causing the cable to miss connecting properly. I would like to see a locking cable on the monitor which would solve this minor issue. Other than that minor quibble I felt that the sound was exceptional and revelatory.

The SR1a is a new design that recreates a magical performance. Ribbon monitors for the head are now a reality and the sound it creates is sensational. Lifelike reproduction of music is rarely achievable but the SR1a manages to easily accomplish that feat.

The beauty of music is recreated and the monitor design is unique in that it takes you on a magical journey and the performances are as good as it gets in personal audio listening. The RAAL SR1a ribbon is a new design that is inspiring and captivating and the first to offer Earfield Monitor Ribbon technology. Listen and you may find this is exactly what you want for your end game solution. Impressive to listen too and gets my highest recommendation for anyone looking for the real live sound of recorded music in your home or office. Highly Recommended.