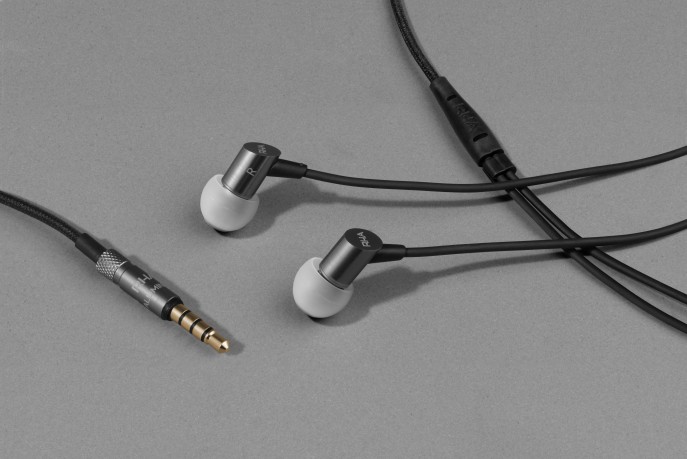 There’s no shortage of budget-friendly IEMs on the market today. Any number of stores display cheap, throw-away earphones in their checkout lines or next to the register, but these are often traps. Most of these IEMs sound terrible with fat, bloated bass, mids so low that even Hermes Conrad couldn’t limbo his way underneath, and treble that feels like someone is using your eardrum as the base for a drill press. Why can’t an inexpensive IEM sound good? Why can’t these stores stock products that an audiophile on a budget can gladly purchase? Enter the S500i.

The S500i is the latest budget-friendly offering from RHA. Sporting a price tag under $50, this could be the budget IEM that music lovers have been craving.

The S500i is certainly not overburdened with accessories but RHA did include all the essentials. You’ll find the packaging contains a carrying pouch alongside a number of silicon ear tips. In a generous gesture, RHA provides two pair of small, medium and large tips as well as a single pair of double flange for those who prefer that style. The final accessory comes in the form of a small clothing clip. That’s all you’ll find in the box, but there’s really not any need for more.

Build quality is excellent. RHA decided to stay away from plastic enclosures and went with a machined aluminum body. The housing is small and unintrusive, a smart design choice that will appeal to even the most fashion-conscious listener. The right channel is home to the 3-button remote and microphone and functions smoothly with all compatible Apple devices. The left and right wires are coated in a soft and flexible thermoplastic rubber leading down to the split. The remaining portion of the cable is sleeved in a tangle resistant braided cloth. To complete the cable, it’s terminated with a gold plated 3.5mm TRRS connector, housed in aluminum like the ear pieces.

The remote on the S500i is one of the nicer ones I’ve used. On many 3-button remotes there’s not enough distinction between the volume and control buttons. The S500i uses the same design as the remote found on other RHA IEMs such as the T10 and T20. The main control button is concave and can easily be found with the thumb or forefinger when reaching to make a change. As a result the volume buttons sit higher and are clearly separated from one another. On some remotes it’s a guess exactly which button you’re pressing until the change occurs, but on the RHA remotes that’s never a problem.

I’ve always admired the thought and consideration that went into RHA’s headphone design, but I often found myself wishing their headphones had a touch less bass. The S500i’s sound signature makes a rather interesting departure from what many consider the RHA house sound, and it’s made the S500i more in-line with my tastes than nearly every RHA model I’ve heard previously.

The S500i features an even and linear low end that does an excellent job conveying detail and separation. It delivers a wonderful experience when listening to an upright bass walk a line, but it’s less than ideal when you want the rich, full-bodied bass often found in electronic music. Shpongle’s “Turn Up The Silence” comes to mind as a great example. Through the S500i, the bass guitar is very clean and crisp, but I found myself wanting a touch more “oomph.” Switching gears to a tune like “Alive” from Hiromi, the bass guitar could not be more spot-on. The quick decay and tight control allows for the bassline to perfectly blend with the rest of the trio.

The S500i’s sound takes a shallow dip in the lower midrange but does a superb job keeping that dip from becoming too distracting. Again visiting Hiromi’s “Alive,” her piano sounds more polite around middle C than in the lower range. This doesn’t mean that the mids are recessed, because they certainly are not, but a touch more would not feel amiss.

Continuing through the midrange the response begins to tilt upwards until it becomes very prominent in the upper midrange and lower highs. The sound is detailed and clear, but the treble can be peaky at times. Thankfully it’s far from the ear-shattering sharpness found in several other IEMs on the market. Hiromi’s quick attacks at the keys during the more energetic movements can occasionally be a bit much, but overall the experience is enjoyable.

The S500i’s soundstage is not small. In fact, quite the opposite is true. I found that the soundstage was surprisingly large given the size of the enclosure. The sound presents an excellent sense of width and depth with moderate height, but it comes across as somewhat artificial. Because of the clarity and detail in the upper register, imaging is excellent and you can easily place all instruments when listening to your favorite music. But due to the more polite nature of the lower mids and the upper emphasis, the performers feel more spread out than they’d naturally be during a performance. This effect is less noticeable when there is a lot going on, but it’s more apparent when listening to a small group. This isn’t a strike against the S500i, but it’s something that bears mentioning.

There’s really only one major complaint that I have about the S500i and it’s one with a simple resolution. The cable is designed in a way that is meant to be worn straight down from the ears. This is a common trait that the S500i shares with all of RHA’s sub-$100 IEMs. Unfortunately, this design often results in a very microphonic cable and that’s true once again with the S500i. When worn as designed, the cable rubs on the listener’s clothing or close by objects and creates a noisy listening experience.

This is easily remedied by rotating the IEM so that the cable runs over and behind the ear, creating more surface contact along the cable and reducing noise. The drawback to doing this is that it raises the remote so that it sits along the jawline. This has a negative impact on the built-in microphone, putting it in a location where it’s harder to pick up the listener’s voice. That’s a trade-off I’ve taken during the majority of my listening with the S500i. I listen with sources other than my iPhone, and the remote and mic don’t serve any function when that’s true. I’ve only used the microphone a handful of times. When I’m listening to music the over-ear method is my default choice.

One more detail to mention is that the S500i is available exclusively through Apple. There is a version of this IEM without the microphone and remote called the S500 and it can be purchased direct from RHA or through any of their partners. The S500 shaves off a few bucks and comes in just shy of $40.

I’ve been carrying the S500i almost daily while I’ve had my review unit. It’s voiced in such a way that I want to always have it at hand, and at its asking price there’s no reason not to. It’s sturdy enough that I don’t fear breaking it, but should that happen it’s not painful to pick up another pair. Budget friendly price, availability at Apple stores, and an enjoyable sound make the RHA S500i one hell of an enticing IEM. It won’t appeal to bassheads or the lovers of luscious midranges. It’s not a good fit for listeners who are sensitive to treble peaks. But if you don’t fit into those categories and you enjoy an even, balanced sound, then be ready to embrace this earphone with open arms. At this price, even your wallet will be happy.