The Sonoma Acoustics Model One – The New Kid on the Block 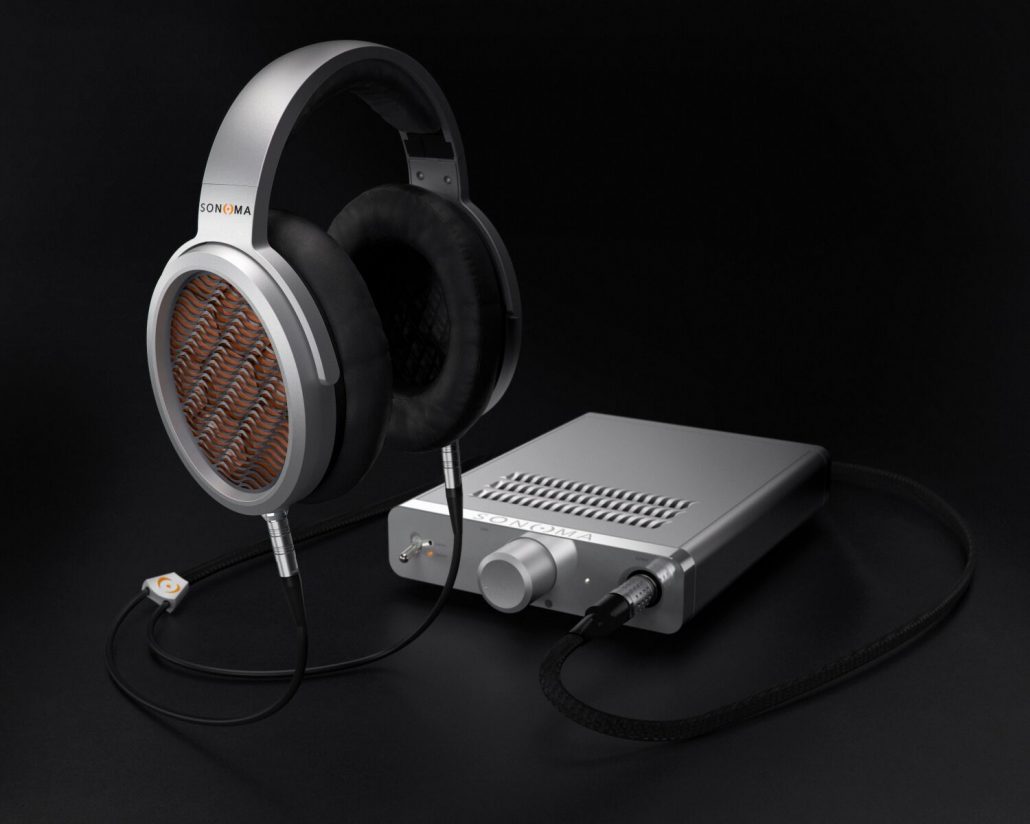 The company was started by folks who initially worked on the SACD format for Sony/Philips. So to say that they had a good grasp of DSD (Direct Stream Digital) processing is certainly very much an understatement. The Sonoma Model One continues in that tradition in their pursuit of true high fidelity and uncompromised sound quality. Coming in at a pricey $4995 US, this setup certainly isn’t cheap, but when comparing it to the top of the line Stax SR-009s and a dedicated headphone amplifier from say HeadAmp (Blue Hawaii Special Edition) or Cavalli Audio (Liquid Lightning 2), the Sonoma price tag comes in at roughly half of that. As well, with the Sonoma setup, you get an included DAC (digital-to-analog converter). The build quality of the Model One is truly beautiful! The headphone frames are built from injected magnesium; which has an excellent strength-to-weight ratio. These headphones are incredibly light on your head and almost disappear as a result. The ear-pads are handmade Cabretta sheepskin and are very soft and comfortable. Initially I found the clamping force a bit too much, but I’m sure they could be adjusted. As this was a review pair, I was extremely careful to return them in the exact same condition that they arrived and refrained from stretching out the headphones.

The electrostatic drivers use a High-Precision Electrostatic Laminate Transducer (HPEL) developed by Warwick Audio Technologies Ltd. This patented technology is a new take on electrostatic drivers, which according to Sonoma offers all of the benefits of traditional electrostatic headphones, but allows manufacture with unprecedented consistency and matching between transducers. The significant difference with most electrostatic drivers is that the Sonoma M1 drivers use a 15µm (less than the thickness of a human hair) flexible laminated film for the front grid. This laminate is attached to an open cell structure (8 cells in total) of an insulated spacer (made from FormexTM) and the resulting film is then machine tensioned in the x-y plane. The result is smaller drum skins being formed in each of the 8 cells. Finally, a stainless steel mesh is used to form the back grid and when the audio signal is “superimposed” on the 1350 V DC bias voltage, the drum skins formed by the flexible front grid begin to vibrate and produce sound. And unlike traditional electrostatic drivers, the sound does not pass through a grid system. The details below outline the theoretical advantages of this design perspective from Sonoma:

“To take full advantage of this feature, everything has been done in the design of the M1 to keep the areas in front of and behind the transducer as clear as possible so as not to impede the sound waves.

Thanks to a proprietary Finite-Element Analysis software package, WAT is able to fine tune the characteristics of the ‘drum-skins’ such that they have different resonant frequencies. Each cell is acoustically independent, but driven in parallel. As a result, the sound from each cell combines in acoustic space, but the independent resonances average out, avoiding any large resonant peak in the audio band (as can happen with a single driver area).”

The energizer unit is made from beautifully machined aluminum and not only looks great, but feels incredibly substantial. A traditional headphone amplifier will not drive electrostatic headphones due to the nature of their specific power (and especially voltage) requirements. The Model One’s energizer was specifically designed to power their M1 headphones. This is an all-in-one solution that is simple to setup and just sit back and enjoy the music. If you are one for mixing and matching amplifiers, DACs and headphones, then you might want to consider this feature prior to purchasing, though I still strongly recommend you give the Model One a thorough listen and consideration, because based on what I heard, I was certainly impressed! The energizer incorporates a single-ended discrete FET Class-A amplifier with very low distortion and an equally wide band width, specifically designed and optimized to drive the M1 headphones.

The DAC portion of the energizer unit utilizes two stereo 32 bit DAC chips in a special mono-mode from ESS Technology. Based on Sonoma’s measurements, this results in a very low noise floor and a signal-to-noise ratio (SNR) of 129dB! This unit can accept the following inputs:

So based on this, you can indeed decide to experiment with different sources by feeding in an un-balanced signal from another DAC, but I have to say that the one included with the Model One is quite impressive and I couldn’t really detect much (if any) improvements when I fed in analog signals from my KTE Level 3 Holo Spring R2R or Benchmark DAC3 HGC delta-sigma DACs.

So the big question now is, how does the Model One system sound? Well, in one word: impressive! Considering this is Sonoma Acoustics’ first foray into not only headphones, but electrostatic headphones, the resulting product really impressed me! From the first time I heard them in October of 2016 at RMAF (in Denver) and throughout my review time with them, they continually kept a smile on my face. Are they perfect? Well, no headphone is truly perfect and while I enjoyed my time with them, there are some areas for improvement that struck, that I will cover shortly.

k.d. lang is a longtime favourite artist of mine. She is one of the quintessential Canadian songbirds, whose unforgettable voice has her in a league of her own. “Hymns from the 49th Parallel” (the name of the dividing line between Canada and the USA) is a compilation of many venerable Canadian songs from several legendary artists such as Neil Young, Leonard Cohen and Joni Mitchell. And to hear these classics as portrayed by k.d. lang is a pure joy. As soon as I heard k.d.’s lead track: “After the Gold Rush” by Neil Young, I could tell that I was going to be in for a serious audiophile experience. I’ve come to expect the utmost in transparency and quickness from my own electrostatic headphones (Stax SR-009 and SR-007Mk1) and the Model One system very much continued in that tradition. k.d.’s voice came through loud and clear. With absolutely zero hint of a recessed midrange, the vocal presentation was outstanding. Everything from the singer’s tiny breaths in between verses to the overall tone and timbre were spot on with these great headphones. A particular favourite track of mine on this album, Leonard Cohen’s “Hallelujah” is an instant classic. I still remember k.d.’s version of this when she sang it at the 2010 Vancouver Winter Olympics. It was this rendition that had me hunt down this album to find this particular song. And here again, the Model One really satisfied. Not only were the vocals simply some of the very best I’ve heard, but the sound staging and transparency were equally inspiring. The bass was fantastically detailed and incredibly quick. Though the amount of bass and bloom were shy of what I would consider as neutral. This is one area I would personally recommend a bit more presence in these lowest octaves. I didn’t find it rolled off, as it did in fact reach down fairly deep, but just pushed back from 100 Hz to 20 Hz. Thankfully the Model One system did respond quite well to some further equalization on my part through Amarra 4.0 on my iMac. I was soon back to the races at full speed.

Sticking with my Canadian theme of music selection, I then went to one of my most treasured albums from the 1990s: The Tragically Hip’s “Fully Completely”. For me, this is my “go to” Hip album and every time I listen to it, it takes me back to my second year in university and cramming for an exam the night before, with “Fifty Mission Cap” blaring in the background to help keep me awake. The raw energy of the band was perfectly captured by this outstanding electrostatic setup! Gord Downie’s snarl and attack were all laid bare with life-like fidelity. I’ve seen them a few times live through the years and it was as if I was transported back to the Molson Canadian Amphitheatre (here in Toronto, Canada) 20 years ago. The ability of the Model One to dig down deep into a recording and pull out details that so many other headphone setups have only glossed over really impressed me. This resulted in an almost lifelike effect. When the loon calls start off “Wheat Kings”, I had to take off the headphones thinking that someone had just walked in the room behind me. After a few times of doing this, I soon realized that it was in fact coming through the headphones. I tried this recording initially without any equalization, but quickly realized that I much preferred a 3-5dB increase to get things to my definition of neutral. After that, I just sat back and bobbed my head back and forth! If you haven’t heard of the Tragically Hip, I strongly suggest you give this album a try with the Sonoma Model One setup – you will not be disappointed!

I very much enjoyed my time with the Model One electrostatic system. The folks at Sonoma Acoustics really hit the nail on the head with their first offering! While I would have preferred a tad more bass presence and the ability to use these headphones on another electrostatic amplifier (like my Cavalli Audio Liquid Lightning 2), the overall performance to price ratio was still very much justified. And this is quite the statement considering this system doesn’t come cheap. That said, for anyone looking for an end game electrostatic setup and wants an all-in-one; plug it in and be done solution, I strongly suggest you give the Sonoma Model One a strong consideration and audition; you will not be disappointed!

Available for purchase from the good folks at Moon Audio: https://www.moon-audio.com/