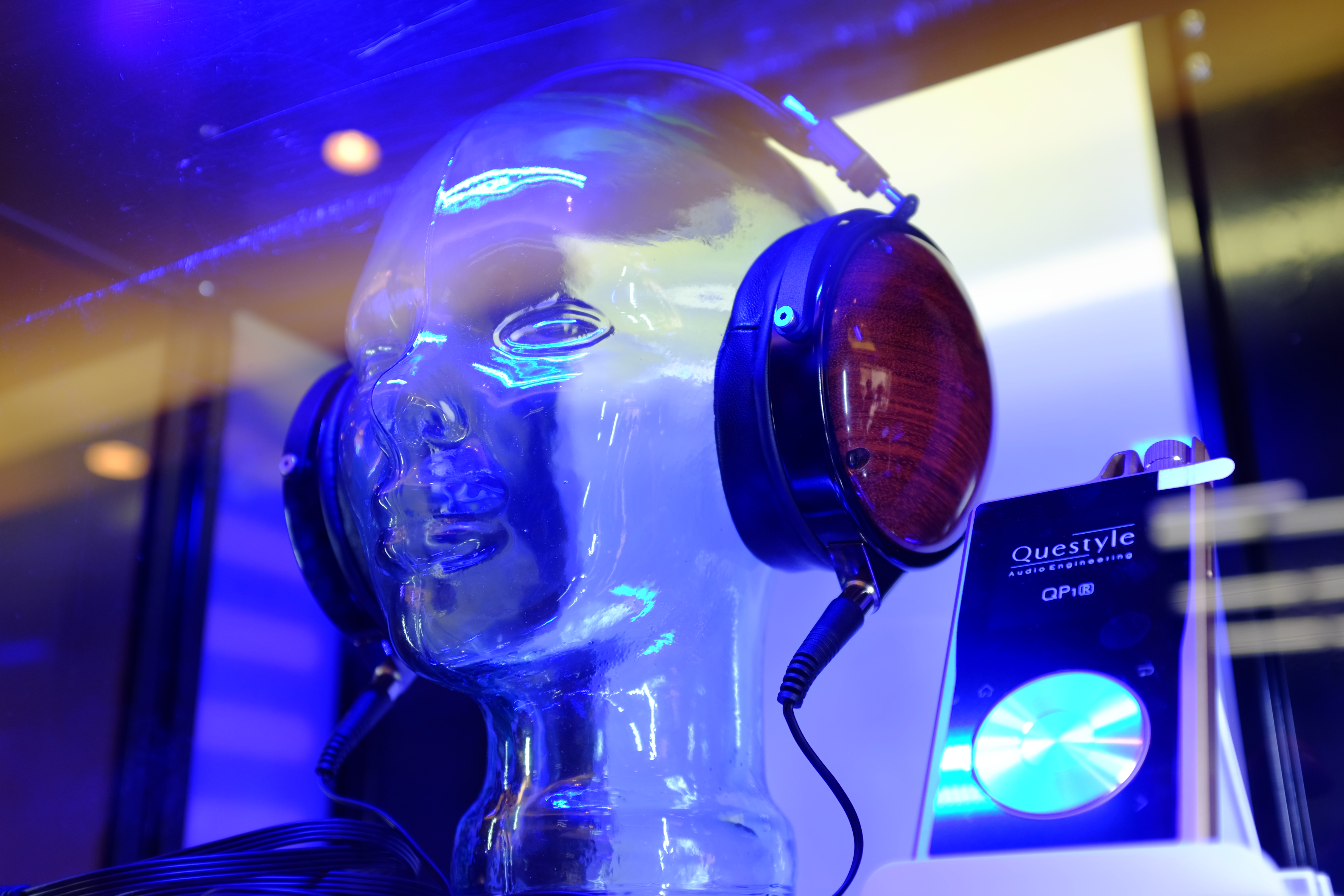 Before I begin, I’d like to take a moment to rant about something that’s been bugging the ever-loving-Schiit out of me.  I know that I typically hand-off ranting privileges to my friend and colleague Michael Mercer, but in this case I feel that I must take my turn with the proverbial talking stick.  Here goes…

Look y’all, the name of the company is Questyle, okay?  That’s quest•style, not cue•style.  It’s a fairly obvious portmanteau of quest and style so I’m not sure why some of you keep saying Cuestyle.  Seriously, stop it, you sound like an idiot when you say it that way.  Think about it for moment.  Had they meant for you to call it Cuestyle, they’d have spelled it that way.  But they didn’t, because they don’t.

And while we’re at it, don’t even think about spouting off that “que” looks like “queue” nonsense – because the only way that would be true is if you removed 40% of the characters that make up the word “queue.”  “Que” doesn’t mean “queue” anymore than “pen” means “penis” – which is why penpal doesn’t mean penis pal.  Oh for Pete’s sake, even Questyle’s logo teaches you how to say it right:

I was first introduced to Questyle by InnerFidelity contributor John Grandberg (Project86 on Head-Fi) two years ago.  And since that time, I’ve seen Questyle transition from relative obscurity to near ubiquity within the Head-FI community, as they slowly but surely win people over with their desktop and portable gear.

One of the key reasons for this growth is Questyle’s direction under Bruce Ball, Vice President of Questyle North America, Inc.  By insisting that community members always have access to Questyle, and by making sure that Questyle exhibits at every major personal audio show in the country, Bruce has seen to it that Questyle is no longer a mystery to anyone in this space.

And recently, not being satisfied with simply waiting for the next show to roll around the calendar, Bruce decided that it was high time for Questyle to put on an event of their own.  But where, and when, should this event take place?  Enter Jason Lord of The Source A/V, an elite hi-fi and home theater solution provider in Torrance, California.

Like Bruce, Jason has been in hi-fi for a long time.  He can remember when it was still fun, and that pure enjoyment is what he tries to offer his customers day in and day out at The Source A/V, where brands like McIntosh, Focal, Audeze, MBL, Naim, Sennheiser, Sonus Faber, D’Agostino, and Simaudio fill the rooms.  I mention this about Jason, because it’s one of the reasons why this story will have a very happy ending.

Over a course of 6 weeks, Bruce works tirelessly to add fellow manufacturers to the mix, which even included offering free exhibition space to competing manufacturers.  By the time the event rolls around, the line-up now includes Questyle, Audeze, EnigmAcoustics, Focal, Kimber Kable, McIntosh, Moon (Simaudio), MrSpeakers, Noble Audio, RHA, and STAX.  RHA, being all the way in Glasgow, was a wee bit too far away to attend in person, but they did send over a few units so that people can try out their IEMs with Questyle’s DAPs.

And then, all of a sudden, October 17th was here.

Arriving just before the start of the show, I was encouraged to see familiar faces already crowding around the entrance just waiting to get in.  This was a good omen, as Southern Californians don’t get up early on Saturday morning for hardly anything.  As we filed in

People came and people left, but the traffic remained reasonably high all day long – except for the Head-Fi faithful who gladly stayed all the way until the end of the event.  And throughout it all, Jason was there to meet and greet everyone with his hilarious blend of arcane knowledge and insightful observations.

And now, onto the main event!

As the organizer and main sponsor of the event, Questyle was more than happy to supply DACs, amps, and whatever else the other exhibitors needed in terms of setting up their listening rigs.  Because of this, and between all of the rigs present at the event, one could sample nearly the entire line of Questyle products – as you’ll soon see below.

This included a rather incredible room where their wireless mono block power amplifiers – each of which could fit in the palm of your hand – easily took on the task of driving a pair of Focal Scala V2 Utopias… a task previously handled by a pair of McIntosh power amplifiers!

Ironically, one of the rigs that we did not get to hear was their new CMA600i that was being launched at that event.  Unfortunately, it was glass-cased by being put on a display pedestal near the store entrance.  i do look forward to hearing it one day, and running it through it’s paces, but even on paper, this is a Swiss Army knife of a unit.

The CMA600i is a desktop DAC/amp combo that is able to handle just about any form of digital input that you can throw at it, converting both PCM (up to 24/192) and DSD up to double-rate DSD.  The signal is then fed into their Current Mode Amplification stage where you can opt for either single-ended or balanced output.  And it retails at a very reasonable $1,299.  But wait, that’s not the best part!  The best thing about the CMA600i is that it’s finished in a bad ass gunmetal (and not a boring silver finish).

And finally, we come to the “biggest” thing that Questyle had at the show, which also happens to be their smallest product in terms of physical dimensions:  their QP1 DAP.  This is the one you’ve been hearing about folks… the giant-killing DAP that is supposed to take down the AK240 sonically… for only $599.

Does it?  I don’t know, I didn’t listen to it at all.  Since I’ll be reviewing the QP1 for Headphone.Guru in the near future, I decided not to use up precious show time by gathering impressions that I’ll be doing at a later time anyway.  But if you’re super curious about how it sounds, and just can’t wait, Head-Fier moedawg140 spent some time comparing it to the QP1R.  You can probably bug him about it on Head-Fi.

While The Source A/V is already an Audeze dealer, Audeze’s Tony Hamilton (not pictured) was in attendance to offer everyone auditions of their newly unveiled LCD4.  I still have yet to hear it myself, but there was a great deal of interest in the LCD4, so much that I had trouble trying to snap a clear shot of the headphone.  Finally, about 3 hours in, I got a clear shot.

Wei Chang of Enigmacoustics brought along a production version of their Dharma headphone.  Arguably one of the most popular headphones at then event, the Dharma wowed many a Head-Fier with its uncannily pristine detail.

Also, pay no mind to that stunningly brilliant D’Agostino amp in the background.  No it’s not a secret D’Agostino headphone amp.  Move along, nothing to see here.  Seriously, I’m not gonna reveal anything about that, so don’t even bother asking.

Like Questyle, Kimber Kable was seemingly nowhere and everywhere at the same time.  If the Kimber guys weren’t around at the moment, there was usually a new Kimber Axios cable attached to a nearby headphone.  Otherwise, you would find them taking every opportunity to offer people auditions, while field testing their cables for quality assurance.

As a McIntosh Reference Dealer, The Source A/V is chock full of Mc gear of all kinds, shapes, sizes and wattages.  So, in addition to some rather impressive two-channel stacks, there are two killer McIntosh headphone rigs set-up for visitors to sample:  (i) an MB100 Media Bridge feeding an MXA70 Integrated Audio System; and (ii) an MHA100 Headphone Amplifier; both feeding McIntosh MHP1000 headphones.

A beaming Dan Clark enjoys the reactions of a lovely couple as they audition his ETHER open-backed headphone.  Meanwhile, Michael Mercer – having just received his review sample of Kimber Kable’s new Axios lines of headphone cables – can’t wait to get his hands on the nearest ETHER for a quick listen.

Having come down with a case of something-or-other, the local STAX representative was unable to attend to their exhibit.  Luckily, Questyle’s Gary Barker pulls double duty by volunteering to help them staff their booth, as well as Questyle’s booth.  Here he is assisting Head-Fi member jw111, and Kimber Kable’s Nate Allen, with their auditions.

As if the glut of audio gear, and sense of community weren’t enough to keep us captivated all day, Bruce and Jason saw to it that we were kept refreshed with all manner of libations… which they then followed up with gourmet pizza, Dim Sum and Tandoori Chicken.  No, I’m not kidding, it was AWESOME!  I enjoyed it all immensely, in some rather large quantities, as those at the show can attest to.

Late in the afternoon, I decided to break away from the personal audio exhibits and cruise the rest of The Source A/V.  And while I’ve been there before, I don’t think I ever truly understood just how massive the place is.  To start, there are six listening rooms in a row, just left of the foyer.  I am, admittedly, incredibly ignorant of two-channel hi-fi.  As such, I’ll simply post the following here are generic audio pr0n without any annotation or embellishment – and I invite my two-channel brethren out there to school me as to the significance of these rigs in the comments below.

There were also six spectacular home theater rooms at The Source A/V. and they were all brilliant, within their respective price ranges.  Unfortunately, the rooms were too dark to shoot any respectable photos in – and I didn’t know how to work the crazy room control modules to turn the lights on.  My apologies to any and all home theater and multi-channel aficionados out there.

The End Is Only The Beginning

As I said in the beginning, Jason has a fairly long memory of the hi-fi industry.   After the end of the show, a few of us lingered outside The Source A/V, while Bruce and Jason chatted with a few of us about the good old days of hi-fi.  Yes, there were hilarious tales of antics in days long gone by.  And yes, there was some reminiscing of a time when hi-fi was still a community, in much the way that personal audio is a community now.  But the long and short of it was that Bruce and Jason had an epiphany about what had just happened that Saturday, in a hi-fi shop in Torrance, California.

That’s when it happened.  Right then, right there, Jason decided that it was just too much fun to wrap up within a single day – only to be filed away like so many memories often are – without as much as a second thought.  No, that would not do.  Instead, Jason shocked us all by announcing that his project for the rest of the year would consist of building a dedicated and comprehensive personal audio section.  And as he laid out his plans, those of us who are familiar with the network of Southern California hi-fi dealers rapidly came to the same realization…

The Source A/V will soon house the largest personal audio collection of any hi-fi dealer in the Southland.  Even now, as I write this, plans are being made and executed to transform The Source A/V into a personal audio destination that the Southern Californian Head-Fi community would be proud to call its own.  I’m thrilled to say that I will be doing what I can to offer my counsel in this process, and I look forward to seeing what Jason and Bruce will do together.

Yes, it was a good day.  A very good day indeed.