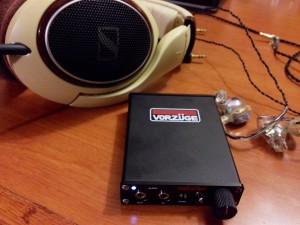 When I first began to get involved in the headphone hobby my first serious steps were in IEMs and mobile amps/DACs. Although I’ve since turned my eyes towards hunting down the ultimate DAP, I still remember my mobile amp days fondly when I was a Leckerton Audio guy. I was quite surprised when recently Headphone Guru threw this new assignment across my desk. It was  Drew Baird of Moon Audio who sent me this review unit, the Vorzuge VorzaAMP PureII+, along with a simple note, “Enjoy, I think you’ll find this little piece of gear to sound quite special”. He would be so right. This review would make me realize no matter how far you move along in this crazy hobby in the end, you sometimes find you’ve travelled full circle only to arrive at your original starting point. It made me realize that even though I’ve turned my attention to home audio over the last few months, in essence, I’m still a mobile guy. Listening to the Pure II+ would make me regret I had stopped investigating the mobile amp arena.

Although I had heard the name Vorzuge before on various forums, I knew next to nothing about this little amp. As you may have guessed from the name, Vorzuge is a German company, headquartered in Stuttgard, Germany, but also has offices located in Singapore. They first began to turn heads in the mobile amp arena way back in late 2011 with the VorzaAMP Duo. The Plus II+ sits at the top as its flagship of Vorzuges’ 4 amp lineup which consists of the VorzAMP Pure ($430.00 USD), the Duo ($520.00 USD), Pure II ($565.00 USD) and the Pure II+ ($615.00 USD). Specs of the Pure II+ are as follows:

The Pure II+ is a very simple and straightforward little amp whose makers like to refer to it as a puritans amp. It’s a rather tiny little amp, fitting comfortably in ones hand, and is roughly 2/3s, lengthwise, the size of an iPhone 5 and about 3 times as thick. When ordering you’re given the option of choosing a pearl white body with black faceplates combo or straight black. Fit and finish of the Plus II+ is excellent with clean crisp minimalist lines and no overly obtrusive screw heads nor rough edges. Both front and back plates are held together to the amps exterior body with 4 silver screws. The back plate is bare with the exception of a lone micro USB charge port. In contrast, the front plate is quite busy with, from right to left, a volume knob, power on/off switch, a gain switch, an audio in socket, an audio out socket and a white power on LED indicator light.

The volume knob is well sized for the amp and tracks rather well, displaying no volume imbalance with any of my IEMs.  The power on/off switch, although located close to the volume knob, was easy to access and felt firm when flicking. Both the volume knob and power on/off switch are firm enough so as not to accidentally be changed when pocketed. In comparison, the gain switch, with gain settings of -1dB, 8dB or 15dB, felt soft, albeit, it didn’t protrude enough for me to concern myself with any unwanted accidental gain boosts. The audio in and out sockets are both countersunk into the faceplate and felt firm when used. Although the two sockets look crowded at first glance I’m glad t report my beefier sized interconnects/cables all fit snuggly and I had no problems with overly sized plugs being to big to use with this amp. Both the bottom and left side of the amp’s body are bare. The top however has the red and white Vorzuge logo while the right side had the red and white VorzAMP Pure II+ logo. Overall, I was quite pleased with the Pure II+ form factor implementation.

Inside is a 2100mAh rechargeable Lithium-ion battery with a built in safety circuit. The battery is rated at 10 hours life between charges but when using my IEMs I found myself pushing closer to 12 hours during real world testing. Depending on gear driven your mileage may of coarse vary. Unlike other manufacturers, Vorzuge chose to go the extra mile with its choice of materials and implementation and are quite proud of the fact that the Plus II+ measures a very low 0.0008 THD+N. Instead of using any solder Vorzuge chose to instead use a silver gold Mundorf™ solder. If that wasn’t enough they also chose to only use a gold plated PCB to help prevent corrosion and oxidation prior and during soldering. This in turn prevents future disconnection or air gaps from forming, resulting in a high level of contact reliability and a continuous audio signal. In short, the VorzAMP Pure II+ was engineered to last as well as to always sound its best.

The following sound impressions were noted using the Ultimate Ears Reference Monitor (UERM) , Noble 4C, Senneheiser HD598, Grado SR 60i, and the PSB M4U 1. Amps used for comparison were the Leckerton UHA-4, UHA-6S and ALO RX MKIII-B. Source material used was a mixture of 16 bit/44.1kHz and 24 bit/192kHz either streamed via Tidal or played directly via player/handset. DAPs/handset used was the Studio V 3rd Anniversary Edition, 5th generation iPod Classic, AK JR and iPhone 5. Some of the source material used for evaluation was 24-bit binaural recordings along with albums such as: RAM by Daft Punk, Jazz at the Pawnshop, the Avatar Soundtrack, DJ Kicks by Kruder and Dorfmeister, Fleetwood Mac Greatest Hits, Free by Office Of Strategic Influence, Stoa by Nik Bartsch Ronin, and Up Close by Ottomar Liebert & Luna Negra.

The VorzAMP Pure II+ is a very clean, dynamic, and spacious sounding amp with a touch of added low end thump giving its bass enough of a kick in the pants to not be accused of sounding overly polite or boring.

High frequencies were clean, smooth, controlled, had decent air, and had a very slow gradual roll off in the upper octaves. Frequency spikes were nonexistent and cymbals, triangles etc, all avoided sounding overly metallic. Although smooth, upper frequencies had nice energy and bite to them and at no time did I feel the Plus II+ wasn’t conveying the music in its entirety

Mid frequencies, although mostly linear, were far from boring. Sounding slightly forward they displayed a rather nice fleshed out character which gave the music a nice fluid and cohesive overall sound. Note decay was neither to phat nor to thin and I found that electrical guitars in particular benefitted while male vocals had a nice throaty heft behind them. Put rather bluntly, this little amp is one great amp for all the rockers out there. I highly recommend listening to a little Perfect Circle with this amp, you won’t be disappointed. The song Judith sounded especially good.

Bass is a full and lush in a way that neither sounds overly bloated nor overbearing. Control is quite good resulting in no leeching into the lower mid frequencies. Extension itself is excellent — think a full three hit bass, with a slight mid bass hump that gave my trance music a nice amount of thump behind it to make me tap my feet.

Staging itself with my IEMs was pretty good, albeit, not the greatest I’ve ever heard. That crown currently resides with the Cavalli Liquid Carbon. While I found that the X and Y axis extended quite high and wide my only gripe was I would have liked more depth on the Z axis. That aside, I must make clear I’m comparing the Pure II+ , which is a tiny amp with a built in rechargeable battery, with amps such as a WA6 or Liquid Carbon which are either a transportable or home amp. Needless to say, that’s far from a fair comparison. Why did I bring it up? Because even though the Pure II+ may not beat out these amps I find it rather remarkable it was still able to hold its own. In my book, that in itself is quite an impressive accomplishment.

The last little while I’ve been quite lucky as a reviewer. I’ve been very impressed with the likes of the AK Jr, and the Cavalli Audio Liquid Carbon and have to comment that the various markets of personal audio is thriving and expanding at an astounding rate. I’m very happy to say that the market of mobile amps hasn’t been left behind in the large influx of quality gear. Five years ago an amp that sounded as good as the Pure II+ would have been an almost impossible task and probably would have cost an arm and a leg. Vorzuge has raised the bar and the mobile amp market has become all the better for it. To all the competing mobile amp manufacturers out there, Vorzuge has just served you notice and the ball is in your court. As it currently stands, the Pure II+ is the best sounding mobile amp I’ve heard to date. If you’re in the market for a small, unobtrusive, well put together, and above all great sounding mobile amp for your handset/DAP I suggest looking up Drew of Moon Audio (http://www.moon-audio.com/vorzuge-vorzamp-pure-ii-plus-headphone-amplifier.html) for your Pure II+ fix. You will not be disappointed.