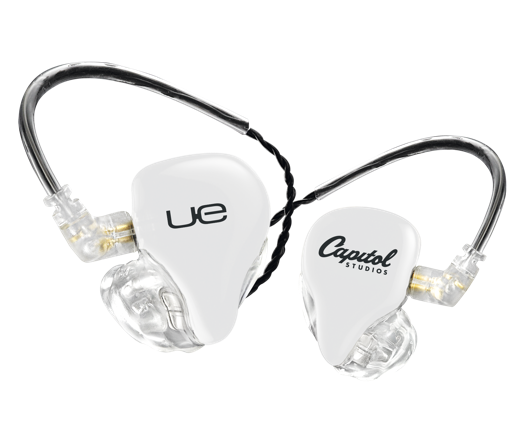 Have you ever wondered while listening to music what it sounds like when the artist is actually recording the music? Do you wonder what it is like when they are in the studio creating the music? Many times over the years of listening to recorded music I always asked myself what it would be like to be in the studio and hear exactly how the recording sounds while it is being created. Most transducers today fail in achieving the sound of what it is actually like in the recording studio where the event is actually being made. Ultimate Ears Pro is known in pro markets for building exceptional in-ear monitors for both the artist to use on the stage while performing and also for the sound and mastering engineers who record music to use while mastering. Located in Irvine California, Ultimate Ears Pro is less than an hour from Capitol Studio B where  legendary artist Frank Sinatra recorded many of his albums.

The original Ultimate Ears Reference Monitor (UERM) was tuned specifically for professional engineers to be used in studio settings. The UERM garnered quite a reputation in the industry and within the personal audio community for being the ultimate neutral in-ear monitor in production. Not reviewing the UERM, I had no reference point to see what  differences were incorporated in the new design. Barak Moffitt at Capitol Studios did the tuning for the new UE Pro Reference Remastered. The primary goal Moffitt had while tuning the UE Pro Remastered(UEER) was to bring consumers the actual sound of what the recording venue sounds like. Moffitt is the head of strategic operations of the Universal Music Group. I was curious to see if Moffitt was able to achieve his goal. I figured it would be great to listen to the Capitol Recordings Sinatra albums  created at the studio with the new monitors. So let the listening sessions begin with Ol’ Blue Eyes himself  in the studio.

The UE Pro Reference Remastered is designed with three drivers per side. The crossover uses multiple passover crossover points and a triple bore sound channel. The frequency response listed on the specifications is 5Hz-25Hz. The isolations is an excellent -26 decibels making the UE Pro Remastered exceptional for isolation of outside noises and quiet enough to use on planes. The 35-Ohm @1kHz makes the UERR easy to drive from most portable devices. The design is striking with the white outer-shell but is also available in different color configurations for the user. The design is meticulously constructed for each user. Ultimate Ears uses 3D printing to create the molds. While at the booth they fitted me for the review sample. The new process creates a tighter seal and saves time in creating the monitors with the use of 3D printing.

Sinatra’s legendary career at Capitol Studio has been well documented over the years and the box set of “ The Capitol Years opens with the track “You Cant take that Away from me”. The recording was done in Studio B and well recorded.  “All of Me” has Sinatra at his finest. The sound coming from the AK240 using the UE Pro Remastered had exceptional clarity. The big orchestra is all around Sinatra. He was known to have recorded in the middle of the room with the orchestra around him. The air and separation on this track is exceptional. The vocal delivery is transparent and loaded with detail.

“Taking a Chance on Love brought me to the studio with Frank and sounded transparent with excellent clarity and detail in the recording. The sound once again was neutral and completely balanced with Frank and the orchestra delivering an exceptional performance. “Come Dance with Me” starts with Frank humming and then a countdown of 1-2 and the studio ambience is clear and articulate with excellent room reverberations. You could feel the magic of the studio in this recording and the sound again had Sinatra delivering an exceptional performance and the UERR was able to recreate the experience and let you hear the sound of the studio.

While listening to the Sinatra albums at time I was wondering where the bass was on the UE Pro Reference Remastered. Switching to Patricia Barber “Company” from her Modern Cool album which has exceptional bass and a track that lets me know how well a product is performing in the lower region. The texture of the bass was excellent but the UE Pro Reference Remastered never produced the grunting bass I have experienced in other in ear monitors. The presentation and quality of the bass was good but slam and growling bass lines was absent in the presentation. The UE Pro Remastered  has good bass texture and extension that many other monitors seem to miss.

Switching to Diana Krall’s DSD recording of “Peel Me a Grape” had the excellent vocal presentation and also had the acoustic bass reproduced with good texture and sounded alive and neutral.  The UERR once against delivered all the vocals with clarity and the detail was excellent. The monitor omitted nothing in the performance and tonality was exceptional. The Copacabana in NYC is a legendary club. Having attended some shows there  in the past I have a good feeling of what the room sounds like. Listening to Sam Cooke performance at the club on the UEERM took me directly to the room. The sound of the venue was alive and delivered exceptionally good transparency and it felt as if I was attending the performance live. The horns coming out on “Bill Bailey” was outstanding and the vocal delivery of Cooke was stellar. He was having fun and the audience and I could feel his energy in the performance while listening to the tune.

Daft Punk’s outstanding album Random Access Memories was well recorded and dynamic. “Get Lucky” featuring Pharrell Williams is an exciting dance tune. The UERR felt more at home producing smaller vocal recordings than larger scale and dynamic recordings. The sound while  balanced lacked the bass slam necessary to create the dynamic feel of the song. David Bowie’s “ The Next Day” sounded excellent with the sound of the venue where it was recorded alive and sounded exceptional but once again I felt the bass was not as extended and the track never came alive.

The UE Pro Reference Remastered  is the most balanced and neutral in ear monitor I have used. The sound from the midrange through the treble was exceptional. The clarity, tonality and musicality from small ensemble vocal recordings are evident in the sound that the IEM delivers. Both female and male vocalist were clear and transparent. The monitor always delivered a sibilant free performance and did not discriminate between male and female vocalist. Both were always masterfully presented. The recordings had exceptional detail and recordings with horns and cymbals were also reproduced with clarity and exceptional tonality.

Listening to most recordings, the sound I heard was exceptional. The bass was balanced and had good texture but only had average extension in the bottom end. I never felt energized while listening to Rock and Electronic music. The bass felt light in comparison to other similarly priced in-ear monitors.  If you’re a listener who loves vocal or small jazz ensembles the UE Pro Reference Remastered will satisfy you with its transparency and exceptional detail retrieval. If you listen primarily to rock or music that requires deep bass extension you may want to audition the Ultimate Ears UE 11 which provides better bass definition with more extension and makes rock and electronic  genres come to life.

The balanced sound of the UE Pro Reference  Remastered  presentation works quite well for jazz, vocal and small classical recordings. The transparency of vocals is exceptional and instrument tonality always sounded accurate. If you love neutral and balanced presentations you should audition the new Capitol Studios inspired UE Pro Reference Remastered.  The midrange and treble always delivered exceptional musical performance except for the minor quibble with bass extension. Beautifully built and designed the UE Pro Reference Remastered will satisfy many users  and is recommended for users looking for the ultimate in a balanced and revealing in-ear monitor.