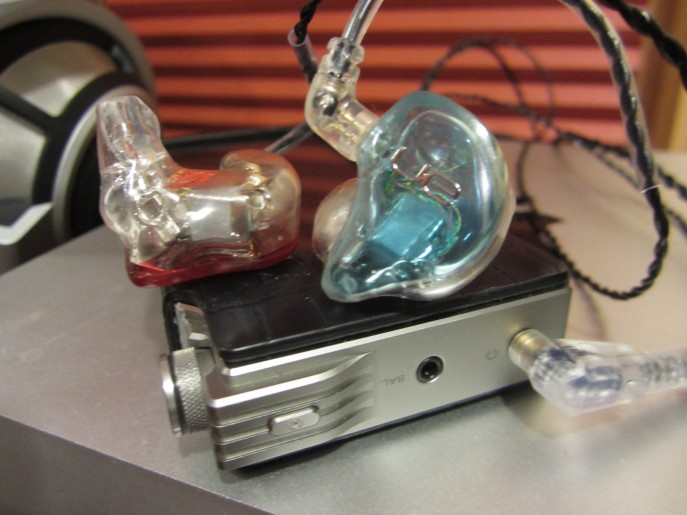 Everyone has a favorite pair of jeans. You know the pair, the ones that you wear everywhere. They fit just right. They are always comfortable. You can wear them for casual, brush them off and add a sport coat and go uptown.  Nothing beats that pair of jeans. The Ultimate Ears UE11 Pro CIEM’s fill that personal audio role for me.

Initially I was not expecting to select the UE11’s when I had an opportunity to tour EU’s facilities in Irvine, CA. UE is one of the original in ear monitor companies. What a thrill it was to be invited into their manufacturing facility. Before arriving I knew I was going to select a pair but I thought I would choose the UE Reference Monitors or the UE18’s. Both are tuned more for studio use and offer a more neutral presentation. UE designates six of their models, as “Audiophile” and these were the two I was most familiar with. However, during the tour we were able to spend time with a new iPad app and a pair of specialized universal in ear monitors that allowed a listener to switch between crossover settings and sound signatures. With a simple tap on the app I could hear what each model of UE IEM offered. What a revelation! As I listened to each model it was clear I was gravitating toward the UE11’s more solid low end. With my extensive travel schedule I have come to value that extra low-end power to help compensate for road noise. The UE11’s were a perfect choice!

First thing for me is the fit. Like a great pair of jeans I want them to feel like they are part of me. Ultimate Ears succeeded big time with mine. First some basics on achieving that perfect Custom In Ear Monitor fit. Custom IEM’s require some extra steps as they are molded to your individual ears. This has always been done by having a quick drying medical grade silicon squirted into your ear while sitting very still for several minutes with a bite block between your teeth waiting for the silicon to firm up.

Last year at RMAF Ultimate Ears introduced a new impression that forgoes the need for the Silicon and instead takes a “Digital” image using a laser. I still had to sit still for the process and I still needed the bite block but nothing was put into my ear making the process much more comfortable. The file that is created can be e-mailed to the Ultimate Ears factory in Irvine, CA. The shells are then 3D printed saving time. Of course they can still be made with traditional silicon if the scanning is not available. Ultimate Ears has the process down to under a week for delivery for digital images vs. an average of three weeks for impressions and four to six weeks for most competitors.

The UE11 Pros are a four-balanced armature (BA) CIEM. Their low-end emphasis is derived from the addition of a subwoofer specific BA that is paired with the low end BA in a dual channel alignment. The Mid’s and High’s are paired together in the other bore channel. The whole team of BA’s is connected via a three-way crossover that manages the subwoofer judiciously so as to not over emphasize an already potent low end. Many IEM’s today are in an arms race trying to pack as many drivers per side as they can with more exotic crossover designs. UE has accomplished something noteworthy by designing an extremely coherent sounding CIEM using more modest design parameters. The additional low-end emphasis is appropriate given their target market; Bass players, Drummers, DJ’s and road warriors like me!

I received the UE11’s in their very complete owners package including a nice travel case and cleaning tool. Then I got down to some listening with them and a few other CIEM’s for comparison. Sources were the Astell & Kern AK120mkII, the Questyle Audio QP1r and the Fostex HP-P1/iPod Classic 7G. I used a mix of CD Rips as well as Hi Res files from HDTracks.com and Acoustic Sounds Super Hi Rez site.

First up on the Astell & Kern AK120mkII is the Alan Parsons Project’s May Be a Price to Pay from A Turn of a Friendly Card. (DSD 2.8MHz, Acoustic Sounds Super Hi Rez) This is a great song (and album) I have enjoyed for 35 years. It starts with massed horns and incorporates an orchestra along with classic rock style electric guitar and vocals. The opening sequence with French Horns and trumpets is full and brassy. As I move into the core of the bass guitar establishes a solid foundation under the orchestra and vocals. Here the subwoofer provides more footing than a less low end configured IEM would provide. For me this is a plus. Some may find it too powerful for their tastes (That is what the UERM and UE18 are for!) This is an excellent presentation. While the bass is prominent it does not cover up or reduce the clarity of the Mid’s and High’s. Overall this is a very satisfying presentation. Listening to the same song on the ACS Custom T1’s, which are a three driver Custom IEM, showed the reduction of low-end energy. The T1’s offered nice clarity but nowhere near the solidity of foundation provided by the UE11’s.

Moving on to the Questyle QP1r DAP I brought up Steely Dan’s Third World Man from Gaucho. (DSD 2.8MHz, Acoustic Sounds Super Hi Res) This song offers a great blend of guitar and electric piano work once again supplemented by a crisp bass line. It takes a very accurate CIEM to correctly reproduce an electric piano. Growing up with a professional piano player for a Dad, I have many fond memories of his Wurlitzer. Donald Fagen’s playing always reminds me of those days and the UE11’s are exceptional at reproducing the notes. The guitars have the right amount and quality of fuzz box effect. The high hat cymbals are clean and shimmer nicely off in the distance. Another thing is the wide-open sense of space. The UE11’s are able to produce the “Out of my head” experience that is a challenge for many in ear monitors. I switched over the JH Audio JH16 Freq Phase CIEM’s and repeated the song. The JH16’s have quad low drivers so they are similar in their intended market. They offer eight drivers per side with a three-way crossover. They also have a 3 channel triple bore and the Freq Phase tech to deliver each frequency at the right time. The JH16’s are the same price as the UE11’s and it is a dogfight between them. Two very different approaches have very similar results. I would say the UE11’s offer a wider out of your head experience while the JH16’s are perhaps a bit less low end focused having Dual Mid’s and Dual High’s to offset the quad low drivers. For a traveler or a stage performer I would expect a person to be very satisfied with either unit. Ultimately, it is a tie with each having a slight advantage in certain areas over the other. These are two workhorse daily use major performers.

Next I moved on to Female vocals and queued up Christina Aguilera’s Fighter from Stripped. (CD Rip AIFF 16/44) Possessing one of the clearest and strongest voices in the market today I have always admired Christina’s power and her edge. The clarity of voice comes through and with the passion necessary to pull you into the music. This is a power pop ballad and the low end is also very central to the song. Nothing is missing here as the Subwoofer kicks in and provides that low end push to drive the beat. I ended up listening to several songs and stopped critical listening. Sometimes you have to just ride with it and enjoy great music played on great gear! Bravo Ultimate Ears!

Wrapping up I pulled out Evanescence self titled album and Made of Stone. (AIFF 16/44 iTunes) Amy Lee is an incredible vocal talent. Many bands have copied her cathedral style of Goth Rock over the last several years and none have reached her level. This song is practically operatic in its power and scope with Amy’s soaring voice being backed by Powerful drums, twin lead guitars and, of course, a persistent bass line. The UE11’s delivered the full scope of this performance. Not an easy task given the complexity and power of the song. Once again I found myself staying with the album and listening to several more songs. This is why we buy gear. To listen to music and enjoy it’s emotion and power.

I have spent many hours enjoying the UE11’s in a critical listening environment. Most of the time though they have been my primary on the go headphones paired up with my iPhone 6+. I ordered the iPhone cable from UE and this is my day to day traveling rig, and I LIKE it!! When you are on the road a lot the opportunity to have convenience and quality as the default option is truly wonderful. Like my favorite pair of jeans when I go out to start my day the UE11’s are what I reach for first. They can dress up or dress down with the best!

Less available customization of shells than other brands.
Lot’s of quality competition in this price range.

3 Way crossover utilizing the subwoofer only as needed.

2 Channels for phase alignment. One for Mid/High and the other for Low/Subwoofer.