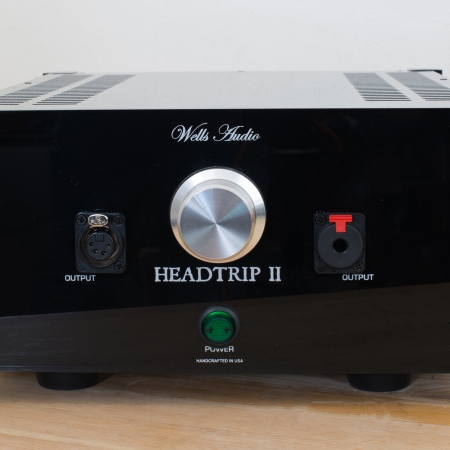 Many headphone community members are seeking that one amp that has enough power to bring their hard to drive classic headphones to life. The HiFiMan HE-6, the Sony MDR-R10, and the original Abyss AB-1266 all required huge power to light up properly. Stories of the HE-6 being tapped to actual speaker amps are passed around in hushed tones. Naturally, no self-respecting community member would give up sonic quality just to get power. The amp must also bring finesse, speed and be as close to sonic nirvana as possible. That’s all, just bring all the best aspects you can find and fit them into one king of the mountain box. Is there such a unicorn?

When the JPS Labs team needed an amp to bring the mighty Abyss AB-1266 to life, they approached Wells Audio of Campbell California to build one. Known in the audiophile world for exceptional speaker amplifiers, like their Inamorata Signature 150wpc amp, they often receive Best Sound in Show for their gear. Jeff Wells used the Inamorata as his inspiration and came out with the Headtrip. The Headtrip could only be described as the Solid State headphone amp to beat. We reviewed it highly in 2015 ( https://headphone.guru/wells-audio-headtrip-headphone-amplifier-jerry-garcia-never-had-a-headtrip-this-good/ ).

Four years later, Wells Audio has brought upgrades and improvements and now offers the Headtrip II for your listening pleasure. What constitutes the changes for the new version 2.0? The first thing you will notice is the new acrylic chassis. The Headtrip II is nearly all acrylic except for the bottom panel. The original prototype was aluminum but cast acrylic is a very hard substance and is used for making bulletproof glass.  It is also lighter than cast aluminum making the amp easier to handle when moving. If it gets scratched, you can buff it out to a like-new shine. Once Aluminum is scratched you cannot fix that easily. Plus, the heatsinks were moved inside removing the sharp metal edges we all love so much on amplifiers. Next was the evolution of the main circuit with updated components and layout updates. Sonically everything is faster, less colored, more transparent, more neutral. Listening tests in the lab alongside the original Headtrip confirmed the new Headtrip II surpassed its older sibling.

Talking to Jeff Wells about his engineering philosophy he stated that the circuits are “designed to lower noise and distortion, that is all they really do so we don’t change the circuit often,” he said. “However, improved parts do come along and with listening and experimentation you find better combinations to improve your gear”. “Keep it simple, use the fewest good parts and execute the design to the highest standards you can”.

The original Headtrip had two blue LED’s by the Right and Left outputs to indicate power was on. A few clients complained that the lights were bright and distracting so they were removed and replaced with a green lit power button that is more subtle but still indicates the unit is on. The original had dual 3-pin XLR’s for balanced out while the new version has one 4-pin balanced XLR output. What has not changed is the units power output of 50 WPC at 8 Ohms, 25 WPC at 32 Ohms and 1.8 WPC at 600 Ohms. It is a powerful amplifier and yet in listening to it, you discover a vanishingly low noise floor. The Headtrip II also has the ability to display all the nuances of the recording including the most subtle and delicate passages and details. No matter what headphones you own, the Headtrip II will drive them with aplomb.

So, after all the technical review how does it sound? My first headphone and album combo up for testing, are the Focal Utopia’s using the Dana Cables Lazuli Nirvana reference cables with a 4-pin balanced connector and The Police with Regatta de Blanc’s “Walking on the Moon”. (1979 A&M) As soon as the track starts you hear the low buzz of transformers and the wide-open sense of the recording studio. A low lab type descending tone comes from the right channel. A particular sound I have never heard before on this track even though I have listened to it for forty years. The exquisitely crisp snare drum and cymbal work from Stewart Copeland set the tempo. Sting’s bass line backstops the song alongside the jangling guitar work from Andy Summers. The word authority comes to mind as the delivery of the band is both individually and collectively solid and grounded. There is a surety around the delivery. The Headtrip II provides ample resources to the delivery of the song. The incredible air around the cymbals and high-hat of the drum kit amply display the ability of the Headtrip II to be just as subtle as it is powerful. The amps ability to deliver space between instruments while exposing the space around them was simply wonderful.

Next up was the Sennheiser HD-800’s with the Toxic Cables Silver widow’s with a ¼” single ended stereo connection and the CD of Seal 7’s “Padded Cell”. (2015 Warner Bros.) Once again, the presentation had terrific space. The Headtrip II let the vaunted HD-800 soundstage scale as wide as it needed to. This recording has heavy orchestration which can clog some amps as the layers get trapped on each other. Not so with the Headtrip II. All parts of the presentation had their own room and yet the whole of the song was complete and effortless. Vocals occupied their specific space to the complementary effect of the music. EDM bass lines were very deep and highly impactful. Seal’s soulful voice rang clear above the music. It was an excellent presentation that was very engaging throughout.

Moving on to some classic arena rock I put on the Scorpion’s Crazy World album (1990 Vertigo, Mercury) and fired up “Kicks After Six”. If you have perhaps the most powerful headphone amp around, paired with the fantastic Audeze LCD-X headphones and Toxic Cables Silver Widow cables in fully balanced mode with a 4-pin XLR, then you might as well crank it. The Headtrip II delivered this hard rock grinder’s signal to the LCD-Xs with full-throated power. The double kick drums pounded out arena level concussion. Guitars thrashed with metal abandon and the bass line thumped with 16-year-old rock fan depth. It was a fun flashback to the old days of general admission tickets and fighting your way to the front row. I followed it up with the next song, “Hit Between the Eyes” and let the good times roll. I know the Headtrip II is well able to deliver subtleties but to unleash all of that power. The LCD-Xs come in at 20 Ohms so that means over 30 WPC available to them via the Headtrip II! I had to pause for a few minutes to let things calm down after this session. Five raised lighters out of five!

For the last session, I wanted something with great precision and speed. I paired the Headtrip II with the Planar Magnetic HiFiMan Edition Xv2s with a single-ended ¼” plug. I wanted music that could put the amp and headphones to the test. I selected Area 52 by Rodrigo y’ Gabriela (2012 ATO Records) “11:11” begins with a flamenco flair and then segues into a lead bass line that is a couple of octaves above what you generally get from a bass guitar. It progresses into the nylon guitar lead that is lightning fast and requires the amp to be immediate and responsive. The resulting marriage between guitar and hand percussion is worthy of a live performance. Piano notes are struck in a natural way. This is a masterful album with bits of Flamenco, jazz and Cuban influences mixed with electric guitar. The Headtrip II effortlessly conveyed the delicious mélange of style and rhythm of this world music classic.

The new Headtrip II surpasses its progenitor with more clarity, speed, and precision. Both models have brought the power to the show and there is no headphone I know that would not benefit from a pairing with the Headtrip II. It may be the best solid-state headphone amp out there today. I have not heard any that surpass it unless it would be the Headtrip Statement at more than twice the price. I would encourage you to audition one but to also make sure you have your cash ready. You will not want to send it back. I know I didn’t want to! Highly recommended!