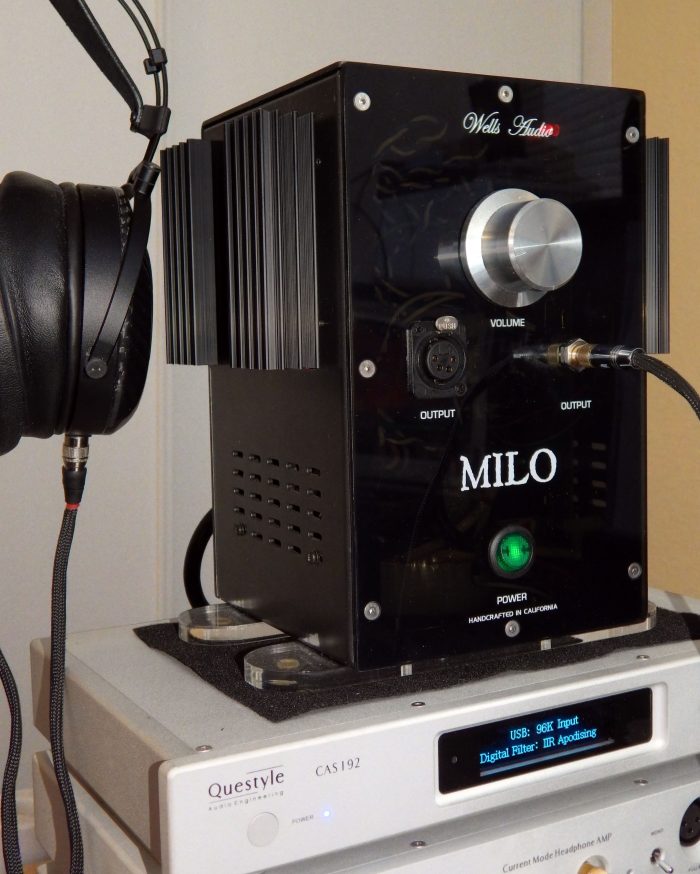 Not too long ago I had the opportunity to review the Wells Audio Milo Headphone Amplifier and I am not afraid to admit that I was very impressed. It stands tall among the very few solid state headphone amps that I truly enjoy listening to (despite the fact that my reference amplifier is solid state I am at heart a tube man, it is hard to match the resolution and musicality of tubes using transistors, but a well designed solid state amplifier can produce magic all its own and the Milo is one such amplifier). Because of this, Jeff Wells offered to lend me an upgraded version of the Milo for comparison, the upgrades being a custom Khozmo stepped attenuator (with a unique more aggressive logarithmic taper that allows for less gain at the beginning) and Vishay “naked z foil” resistors on the Khozmo. Handcrafted in California, the Milo is a simple dual mono solid state amplifier, though the two amplifiers do share a single toroidal transformer. The unit I was provided with has a single set of single ended inputs (balanced inputs are an available option), and both a ¼” single ended output and a four pin balanced output (the amplifiers are single ended, though with a 12 Watt output @ 32 Ω, this is hardly an issue, generally, all else being equal, single ended amplifiers are usually preferable to bridge amps anyway).  Boasting a laser flat frequency response from 16 Hz to 30 kHz with only a half a dB deviation, the Milo offers what I would call an Audiophile sound signature, slightly warm and very musical.

The upgraded Milo became my primary amplifier for a couple of weeks prior to the writing of this review, so I had plenty of time to break it in and become accustomed to its strengths and weaknesses. I began my serious listening session with the Questyle Audio CAS192 Current Mode DAC and the MrSpeakers ETHER C Flow using the balanced output (I like my balanced cable more than my single ended one). Giving into whim a queued up “Morbio Gorge” by Gordon Giltrap (16/44.1 kHz), the opening acoustic guitar was full and rich set in a good sized room, the pluck of the strings and the sliding of his fingers well defined without being sharp or edgy, with a very natural and intimate tone. When the rest of the band kicked in, there was plenty of dynamic range to cover the boost in volume while maintaining the increased detail of the layered instruments and retaining the musicality of the analog synthesizers. The percussion had a great deal of pop and the cymbals had shimmer rather than sizzle and spit.

I had a similar experience with The Who’s “Getting in Tune” (16/44.1 kHz), Entwistle’s meaty bass a honeyed compliment to Nicky Hopkin’s Steinwayesk piano with Daltrey’s liquid vocals in the foreground of a deep airy soundstage, the Milo handling the dynamic transition with ease as Keith Moon cuts in with his fierce percussion and Townshend’s lazy guitar leads, strong and distant, fill out the backdrop.

The current popularity of Pentatonix cover of the Persuasions’ orchestration of John Lennon’s “Imagine” inspired me to listen to the Persuasions’ classic performance (The Persuasions Sing the Beatles – DSD). It was like having them there in the room with me, just enough air to place each singer separate but together, their voices rich and powerful, loving reproduced by the Milo.

For a change of tempo and to take full advantage of the Milo’s magical midrange I selected “Ship in a Bottle” (Amanda McBroom – Dreaming  – 16/44.1 kHz) and was transported to a small night club, Amanda’s silky voice close and sensual, backed up by electric piano and synthetic orchestra with an electric bass and acoustic guitar providing an ambience of intimacy.

recordings sound harsh, the Milo was able to portray the airiness and soundstage of the higher resolution recordings without making the low resolution track sound grating in comparison). The Milo captured the proper timbre of the different instruments beautifully, making it remarkably easy to differentiate similar sounding instruments and providing laser like precision in placement on a backdrop of a huge soundstage, with epic dynamics, especially during the crescendos, where the entire orchestra was allowed to ring through, down to the simple triangle, despite the crash of the tympanis, horns and cymbals.

To test the Khozmo stepped attenuator’s ability to act as gain control I broke out the Noble Katanas and opted for “Can-Utility and the Coastliners” (Genesis – Foxtrot – 16/44.1 kHz) due to its subsonic properties. Indeed the Khozmo gave excellent control a low volumes, though I would still opt for the 12 dB attenuation option if you are planning on running extremely high efficiency headphone or heaven forbid, IEMs, that being said, the sound was glorious. The subsonic bass control and extension stands among the best I have heard, with layers of tone rather than simple thump making for as realistic presentation as imaginable. My Conclusions: When you start out with a top performer, improvements can often be subtle or even in some cases degradation. The irony of doing a follow up review is you are drawn to the same songs. In this case, I wrote up two of the same songs from the original review, with literally identical comments, so I was forced to replace them with other tracks, though it did validate my previous impressions. There is no question that the Khozmo stepped attenuator gives much more precise control and I do like the improved taper. The Vishay “naked z foil” resistors increase the musicality of Milo, especially on the bottom end, making everything a bit more controlled and natural. I can honestly say that the upgrades are well justified and take what was a truly wonderful amplifier and raise it to almost reference level. http://www.wellsaudio.com/milo/ Base Price: $1,699 Price as tested : $2,249 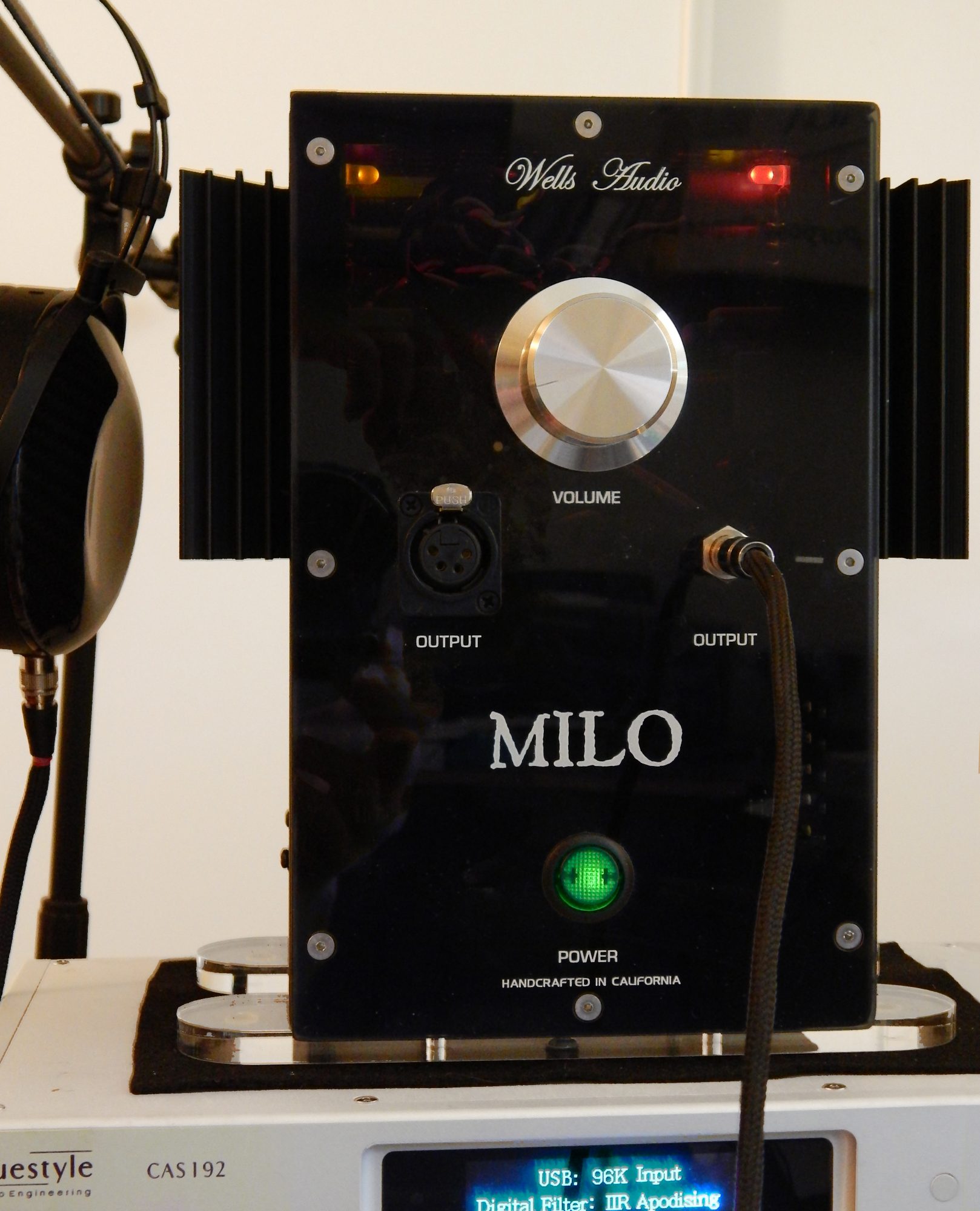