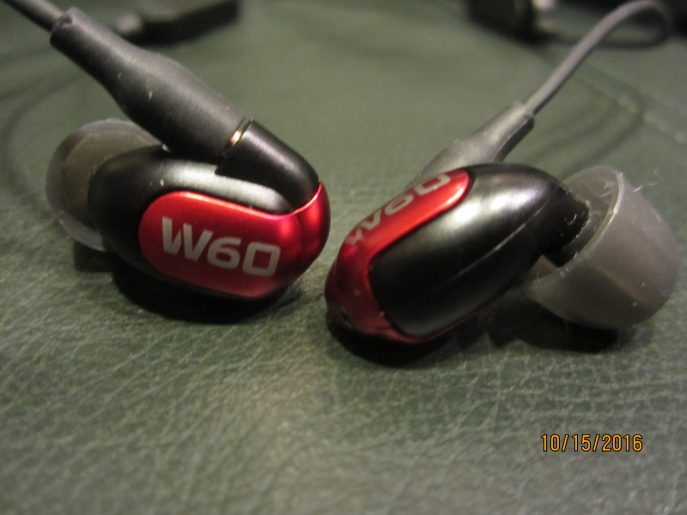 The Guru crew has had the opportunity to listen to a lot of In Ear monitors. Some custom and some universal. Lately there have been several very notable new kids on the In Ear block that have caught our attention. All this new competition has not slowed down the originator in the In Ear business. Westone Audio has been at the In Ear monitor game since the early 1990’s with Jerry Harvey’s Ultimate Ears and as far back as 1959 as a manufacturer of custom fit earpieces. Westone offers a wide selection of universal options peaking with their newly introduced flagship the eight driver W80. Our focus here is on the now number two in the line the W60 Earphones. The W60’s feature six balanced armature drivers and a 3-way crossover. The driver compliment includes dual low’s, mid’s and high’s. This combination creates a seamless presentation from 20 Hz to 20 kHz. The W60’s feature Westone’s EPIC replaceable cable with full Apple iPhone support. I am a fan of the EPIC as it’s construction virtually eliminates any cable noise from the cable rubbing on your clothing or if it gets bumped. The cable sports the Westone MMCX connector allowing new cables to be swapped in as needed or to utilize the Bluetooth cable now available for wireless use. The Bluetooth cable is a step up from many of the wireless options audio fans are finding in this exploding marketplace. The addition of aptX alongside the Bluetooth 4.0 standard reproduces the full audio bandwidth by reducing the bitrate. allowing a hi-res experience. iPhone users will appreciate its controls are fully compliant and Siri accessible.

Westone W60’s ships with a great set of accessories In Ear fans will appreciate that the W60’s are very light and compact. Westone has conducted over two million ear measurements over the years and their ability to leverage all of those measurements to hit the sweet spot for size and fit is admirable. The W60’s come with a wide variety of ear tips to customize your experience. Replacement ear tips are available from the Westone web site. There are also three different color shields to colorize them to your taste. A small hard case is provided along with two types of MMCX compatible cables. Packaging and accessories are flagship quality. 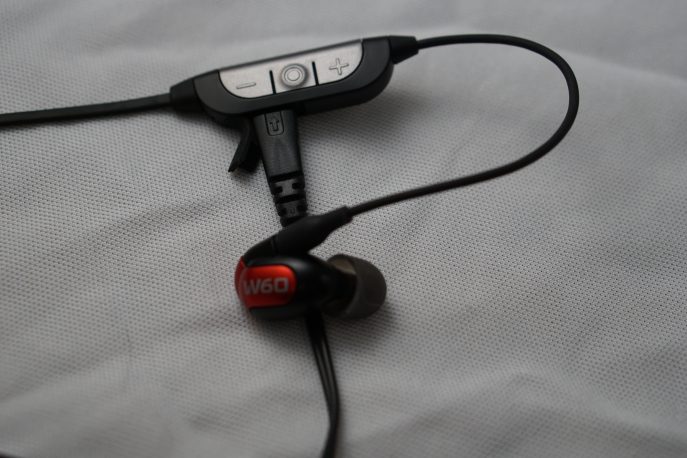 Charging the Bluetooth cable via micro usb Getting started with the listening I installed the Bluetooth cable and paired the W60’s up with my Astell & Kern AK120 MKII. Pairing instructions are clearly outlined in the included getting started section of the Bluetooth instructions. The quality of the performance from Alison Krauss’s It Wouldn’t Have Made Any Difference from Forget About It (1999 Rounder Records CD Rip 16/44) provided the best low end response I have heard from any Bluetooth transmitted signal. The character of the sonics were as a wired signal would produce. This is a remarkable advance. Clearly the focus by Westone on each aspect of the signal chain was paying off. Alison’s voice is quite distinctive. It has a purity that is exquisite. That quality came through clearly. It was also fun to get the sense of space from the studio. It was easy to follow the placement of the band members. It was an excellent presentation by a wireless portable in ear. In fact, is was credible for a wired experience. Thumbs up to Westone! 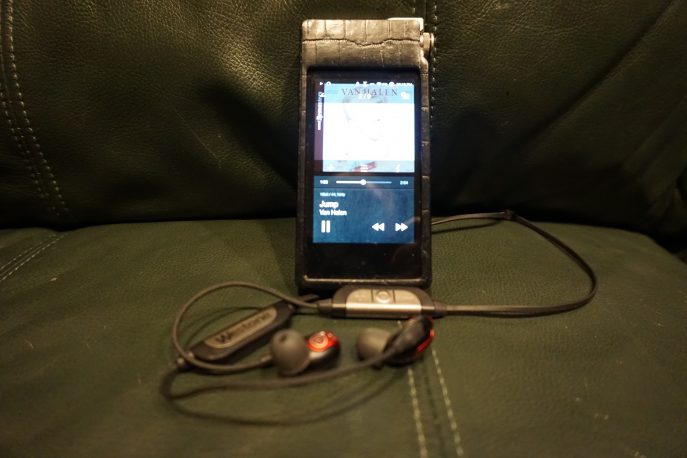 Westone W60 with the Astell & Kern AK120 mkII Digital Audio Player Putting aside the AK120 mkII I went to the iPhone 6S+. Pairing was very easy. Reaching into the iTunes vault I went with Alter Bridge’s Cry of Achilles from Fortress (2013 Roadrunner, EMI iTunes DL 16/44). This is a hard driving rock song with dual lead guitars and a powerful bass/drum team. The W60’s delivered great energy. The slam of the drums and powerful bass line set the stage for the crisp and lightning quick precision of the guitars. Myles soaring tenor came through with power and tone. Mark Tremonti’s guitar work is as fast as any in rock or metal. The speed of the balanced armatures was up to that task. BA’s are generally twice as quick as a dynamic driver allowing them to execute regardless of the musical genre presented. No smear was ever evident during any of the listening sessions. Something else that I generally do not comment on in a review is the wireless benefit when working out. I put in a solid 10k run with the W60’s, Alter Bridge and the iPhone without any fit issues. They were very comfortable and at no time did I feel like they were slipping during a 90-minute run. The handy controls on the wireless cable allowed volume control as well as track control. 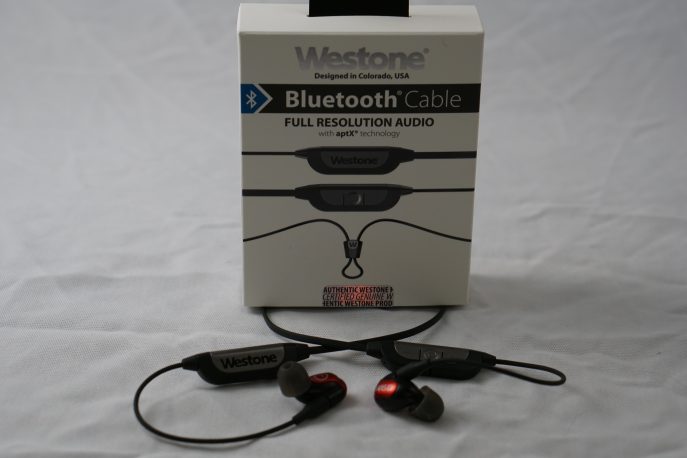 Westone Audio W60 with Bluetooth Cable I removed the Bluetooth cable and put on the wired iPhone compatible cable. The MMCX connectors are firm and dependable. It does take a careful moment to disconnect them. Switching to the Questyle Audio QP1r digital audio player I selected One of These Nights from The Eagles The Studio Albums 1972-1979 (2013 Rhino/Warner Bros. Records AIFF 24/192). The powerful bass track leads the listener through the entire song with low end authority. The guitar solo has the fuzz box timbre that makes it so distinctive. The QP1r delivers exceptional clarity and the W60’s were able to relay that beautifully. The clarity of the high hat and snare drums had just the right snap and swish. There were no sonic leftovers. Each aspect of the brush on snare was precise. Soaring massed vocals, an Eagles specialty, came through with great tone and musicality. 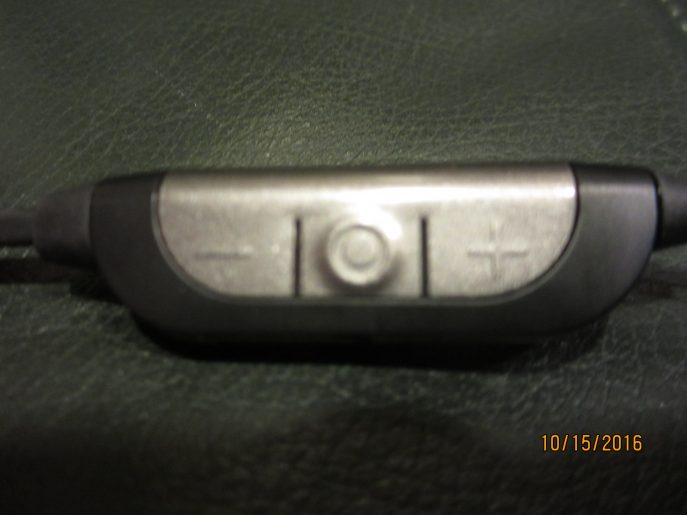 iDevice controls on the Bluetooth cable Wrapping up I queued up Doug MacLeod’s Black Nights from There’s A Time (2013 Reference Recordings AIFF 24/176.4) This is a slow blues tune with acoustic guitar, drums and upright bass. Miking is simple and the listener is placed amid the trio. This creates and terrific sense of dimensionality. Depth and left to right positioning are clear. The guitar work is subtle with Doug’s deft finger work producing fulsome blues. The bass has that solid presence unique to an upright bass. The very slow whisking of the snare comes through almost like soft footsteps on sand. The emotion is exquisite and sorrowful. Naturally I had to listen to the rest of the album. For me that is the ultimate compliment. It was a wonderful listening experience. So, what to make of the W60’s? They spent quite a while as the flagship universal In Ear’s for Westone Audio before the W80’s came on the scene. They deserved that distinction too. Outstanding sonic qualities in a comfortable package are a welcome find. The addition of a class leading Bluetooth cable as an add on to your portable rig expands the functionality of an already solid offering. Westone’s challenge is the gathering crowd of terrific offerings by its competition in the $1000 price point. One thing is clear, the W60’s deserve to be in that mix. They are one of my favorites at this high-end price point. Give them a listen. They may well make your list too. Pros Lightweight Excellent fit with many ear tip options Smooth full sound throughout frequency range Cons Expensive Specifications: W60 Earphones: Sensitivity: 117dB SPL@1mW Impedance: 25dB Passive noise attenuation: 25dB Driver: Six balanced armature drivers with 3-way crossover Cable: MFi and EPIC replaceable 2-year warranty $999.99 www.westone.com Bluetooth Cable: Bluetooth 4.0 with CSR8645 Chipset Up to 8 hours of battery life MMCX Audio Connectors Built in microphone MMCX Connector designed specifically for music IPX4 Sweat and water resistant 10-meter range Under .5 oz. Quick recharge time $149.99