What Dreams are Made of: the Questyle Audio “Gold Stack” Reference System 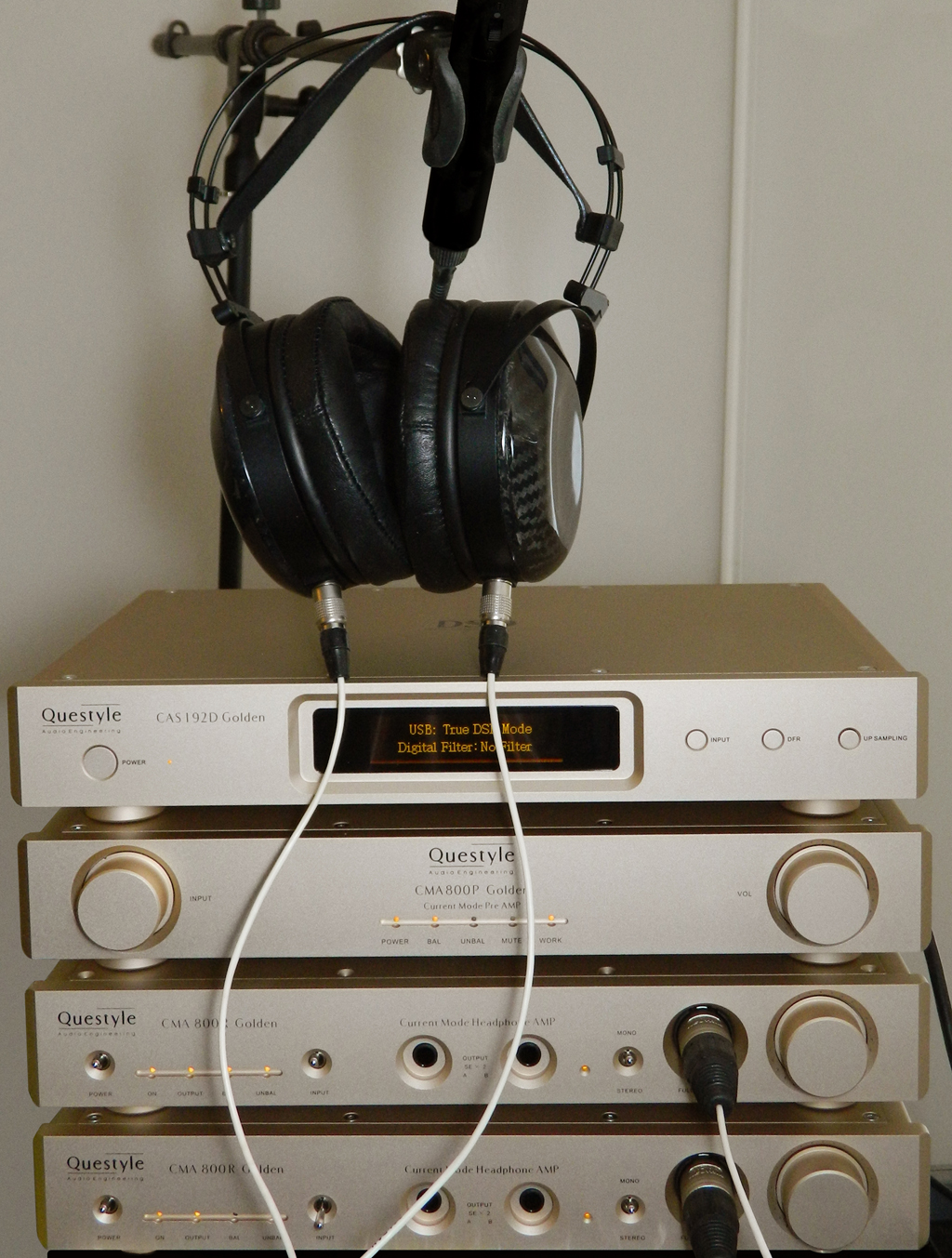 Regular readers will know that I use the Questyle CMA800R and CAS192D in all of my headphone reviews, which I believe makes me uniquely qualified to review their “Gold Stack” reference system.

Questyle Audio is the brain child of CEO/Designer Wang Fengshuo (Jason Wang), who patented his brand of “Current Mode Amplification” while still in college (he currently holds eight patents for the various technologies used in his products). I can hear you saying “What is this Current Mode Amplification anyway?” Well, like most technologies used in personal audio, it is not particularly new, in fact it is a mainstay of microwave communications as it provides a bandwidth and low distortion not possible using Voltage Mode Amplification. Translinear Theory was published in the 1975 by Barrie Gilbert, and several attempts have been made over the years to apply it to audio.

In conventional amplifiers, voltage is modulated (raised and lowered) to produce the sinusoidal signal that drives the loudspeaker in an audio system, whereas the Current Mode amplifier modulates current (power [Watts] is the product of voltage and current in relationship to impedance). The difference is one of speed (measured in slew rate), Current Mode Amplification is hundreds of times faster than Voltage Mode Amplification, giving Current Mode amplifiers a significantly higher linear bandwidth (frequency response across the entire power spectrum. Note: some IC based amplifiers have a linear bandwidth of only 8K, while spec’ing out at 20 to 20K at half power, which means that tonal balance changes with dynamics).

The great bugaboo of solid state amplifiers is Transient Intermodulation Distortion (TIM or TIMD). This is caused by the slew rate being insufficient to accurately form the negative feedback loop, and is responsible for the metallic ringing tone of most solid state amplifiers making them sound a bit bright and harsh. The accepted solution is to forego negative feedback meaning much higher harmonic distortion levels (which is acknowledged as less fatiguing and preferable to TIM) and significantly greater manufacturing costs. The slew rate of a Current Mode amplifier is such that no TIM is produced.

So why doesn’t everybody use Current Mode Amplification? The answer is simple, Current Mode Amplification requires a fixed impedance load, and loudspeakers (including headphones, especially multi-driver designs) are a dynamic impedance load. Questyle’s unique answer to this problem was to add an output stage to their amplifier that simply converts the output back to Voltage Mode acting as a buffer between the amplifier and speaker.

At this point I thought I would spend a little time on each component starting with the CAS192D Golden DAC. Back in the 80’s when digital first began, the majority of high end CD players and early outboard DACs as well as some of the least expensive CD players used the same DAC chips; the difference between them being the analog section, with an understanding that this was the most important factor in the sound quality, a factor that seems to be largely forgotten in contemporary DACs where Chipset and Digital Architecture appear to be held as the deciding factor. Questyle is one company that understands the value of a no compromise analog section along side of state of the art digital. As can be seen in the photos of the interior of the units, the power supply and analog section of the CAS192D Golden is largely the same as the CMA800R Golden down to the use of Current Mode Amplification, a custom Plitron toroidal transformer and twenty two Nichicon FG capacitors.

The Questyle Audio CMA800P was originally commissioned by STAX Ear-speakers for use with their SR-009 system to improve the dynamics and tonal balance of their in house amplifiers. The CMA800P Golden is offered as a control amplifier for the Reference stack, allowing for a single volume control for the dual mono configuration (the CMA800R Golden has a volume control bypass switch that can be accessed by a dealer or service representative). A fully discrete all Class A Current Mode amplifier, it incorporates two power supplies and four amplifiers for a true dual mono balanced output. Both single ended and balanced inputs and outputs are provided.

Though it is known for many fantastic products, Questyle Audio is first and foremost an amplifier company, and the CMA800R Golden as a reference version of their flagship piece stands at the top of the Questyle pyramid. It is again a fully discrete, pure Class A, Current Mode amplifier, which can operate as a single ended stereo amplifier accepting either balanced or single ended input, or be switched to mono to act as a true fully balanced push pull bridge amp (balanced input only), which when used in a dual mono configuration offers four times the power output, a lower distortion level and unparalleled stereo separation.

[Full disclosure at this point, a four pin or three pin output on a headphone amplifier does not constitute a balanced output, or more to the point a single ended output should be no less balanced as it is a speaker output and should not be using a coaxial cable. The correct alternative to a single ended amplifier is a push pull or bridge (two terms that mean the same thing) amplifier. Because of this many manufacturers connect their single ended output to a four pin XLR and call it balanced, while offering no actual benefit over the single ended output. Others are power supply limited and offer negligible benefit. Obviously the Questyle does not fall into this category.]

Finally on to the fun part. I should point out that most of my listening tests were made using the MrSpeakers C Flows, though I have had opportunity to listen to several other headphones which I’ll go over in my conclusions.

After a period of listening to random tracks as background to get a sense of the equipment, I began with Stravinsky’s “The Firebird Suite”, in this case a 24/96kHz vinyl rip of Robert Shaw and the Atlanta Symphony Orchestra, followed by Eiji Oue and the Minnesota Orchestra (DSD). Each track tells me a little something different and Eiji gives me a picture of the soundstage, instrument placement and tonal balance (only with real world recordings of acoustic instruments can I tell if they are being reproduced accurately), while Shaw reveals the raw emotion. It was hard not to get lost in the music so delicately and natural were the players represented, with pinpoint location against the dark backdrop of the stage. The byplay of the oboe and French horns easily discernible as woodwind and brass while the gentle ringing of the bells presented an airy soundstage, both wide and deep. The tympani was fast and articulate, yet rich and deep.

I took this opportunity to compare the Stack with and without the preamp. Most notable was the fact that the CMA800P Golden did not perceptibly increase the noise floor. The high frequencies were slightly sweeter with the preamp in line, while the channel separation was slightly greater without, the latter being more to my taste, while I believe the former would more appeal to the public in general. Traditionally, active preamps give a slight boost to dynamic range and I believe it was the case here.

As a lifelong piano player I switched over to The Who’s “The Song is Over” (16/44.1kHz) featuring the incomparable Nicky Hopkins. The piano was rich and resonant the notes well delineated, while John Entwistle’s bass was quick and well controlled, and each tap of Keith Moon’s sticks clearly audible. Over it all, Roger Daltrey came across as lifelike and impassioned. “Mirage” by Jean-Luc Ponty was tight and focused without any of the added sibilance to the cymbals usually associated with solid state amps, the violin sweet and nimble.

Before switching over to single ended (I wanted to test the system in all of its configurations), I put on Bing Crosby’s “Too-Ra-Loo-Ra-Loo-Ral”. If you imagined the quiet pops and clicks of the original vinyl master to be raindrops, you could picture him in the room, there was nothing artificial or electronic to the sound. In single ended mode (this meant switching to a single amp), the soundstage became slightly more intimate. More demanding headphones might have noticed the decrease in power, but as it was, this was not a factor in my tests. In fact “The Gift” by Midge Ure was rendered with authority and dynamics as was Derek And The Dominos “Layla” (DSD). Once again I was impressed by the richness of the piano, and the ability to pick out all the competing lead lines from the different instruments.

As a final test I decided to see how the Stack would handle IEMs, the 1MORE Dual Driver being the only ones I had on hand that I was familiar with. Nor was I disappointed, proving that even the most humble of loudspeakers can benefit from a superior source and amplification. Dario Baldan Bembo’s rendition of “Non Mi Lasciare” was chilling and bold as was Peter Paul and Mary’s “Blowin’ in the Wind”.

The differences in amplifiers are subtle and are often most notable in what they add to the sound. In the case of the Questyle Audio Gold Stack Reference system, there is none of the metallic ring and harshness or brightness associated with solid state amplifiers, none of the dark artificial coloration meant to create that “tube sound”, no discernible distortion, and no background noise above the noise floor of the media. It displays exceptional current capacity allowing for deep and resonant bass from the most demanding headphone while exhibiting extraordinary damping to control that bass.

As to the CAS192D Golden Reference DAC it is articulate and musical, drawing the best out of 16/44.1kHz while fully rendering DSD64 in all of its analog like beauty. Sonically I would place it at the top of the Sigma Delta DACs and among the best overall. If there are any complaints about it, it is the Wolfson’s inability to handle higher sampling rates than 192kHz or DSD64, but as there is little media available in these higher sampling rates it is of little import (especially considering that programs like JRiver can down convert in real-time).

One of the great advantages of Questyle’s impedance matching design is its versatility making it compatible with almost any headphone (outside of electrostatics). My first auditioning of the Gold Stack was with the amazing ENIGMAcoustics Dharma D1000 electrostatic hybrid headphones of which I was very familiar. It took them to a whole new level of performance, leading to a sonic lust that eventually led to this review. At the launch of the Focal Utopias, I was able to listen to them on several well respected and world class amplifiers, but the Gold Stack was the one system to rise to the caliber that the Utopias deserved.

All in all, the Questyle Audio Gold Stack Reference system, as individual components and as a whole is everything you would expect or desire from a Reference system from a first class manufacturer, and a bargain at that.

I would like to note that each component comes complete with a test sheet denoting the performance of that specific piece. The CAS192D Golden includes a remote control (this is the same remote used by their full line so it includes features not available on the DAC such as volume control). Questyle would also like me to point out that the components are available individually and that it is not necessary to purchase the full stack unless you want the full experience.