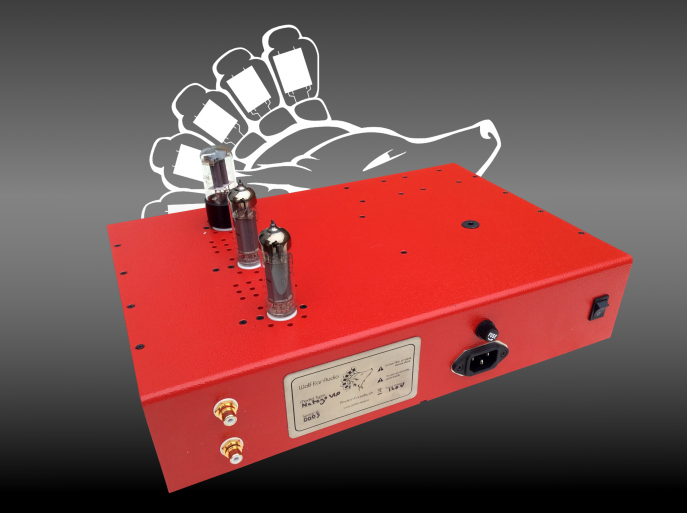 A relatively new comer to the personal audio world, Wolf Ear Audio has released some very impressive dedicated headphone amplifiers. When I asked me to review their new OTL (Output Transformerless) headphone amplifier: The Natayo, I jumped at the opportunity. I’ve owned various tube-based amplifiers in my audio setup for the past 20 years and love their unique sound. Throw in the visual glow that is emitted by the vacuum tubes and it is easy to fall in love with these amplifiers. The new Natayo is one solid amplifier; coming in at a hefty 9kg (almost 20 lbs), so you’ll need to ensure that your rack us up to the task structurally speaking. The gorgeous red color really pops and when the tubes are turned off, this amplifier really offers a wonder for your eyes as well as your ears.

Located in Calgary, Alberta, Canada, Wolf Ear Audio’s products are all designed and manufactured here in Canada. Dealing with Andrew Rintoul has been an absolute pleasure. He’s a passionate audiophile who loves what he does and it really comes through! The one advantage tube based amplifiers have always had over solid-state units is the ability to tune-in your sound to your particular tastes by rolling in different tubes. Thankfully, the Natayo won’t cost you an arm and a leg in this alternative mini-hobby as it only uses three relatively affordable, but highly regarded vacuum tubes: 2x 6P16P output tubes (EL84s can be subbed in here) and 1x 6N8S driver tube (the famous 6SN7 can be used here if you prefer). This volume attenuator is not an off the shelf product, but rather built in-house by Wolf Ear Audio. Coming in at $1800 USD, the value proposition of this amplifier is certainly strong based on the specifications, design ergonomics and sound quality.

This Class A OTL amplifier boasts a whopping 3 Watts RMS into your standard headphones. For an output transformerless amplifiers this is certainly one impressive feat! I’ve owned a few OTL amps in my day and while they can typically swing wider voltages than other amplifiers, they typically didn’t have the power needed to drive the most power hungry orthodynamic headphones like the Hifiman HE-6 or the new Audeze LCD-4. The power supply uses a single choke input coupled with a second choke to offer superior filtering which in turn yields a very quiet clean power supply. The power is then rectified with hyper-fast, soft recovery FRED rectifiers. As well, high quality film capacitors are used throughout the power supply. These capacitors will outlast and outperform even the very best electrolytic capacitors. The full list of specifications for this amplifier are:

For my review I used CDs played through my Cambridge Audio 650C Azur CD player with optical out or USB directly from my iMac to either the Chord Electronics Hugo TT DAC or the newly released Benchmark DAC3HGC digital-to-analog converter. From this digital end, I used un-balanced RCA outputs using my Nordost Blue Hawaii RCA cables into the Wolf Ear Audio Natayo. I threw almost every non-electro-static headphone I had on hand at this amplifier, the Audeze LCD-4 , the Sennheiser HD6XX (Massdrop version; identical to the venerable HD650) and everything in my stack of headphones . Along with some of my favourite CDs, I used many of my beloved high resolution 192kps and DSD recordings as well. Some Tidal and Tidal Master recordings were thrown into this mix to see how nimble this tube amplifier would be with a broad range of musical genres and styles.

As mentioned, this amplifier is a real looker and feels as sturdy and built like a tank. Actually unsure whether my rack could accommodate the full 9kg, I decided to move around some of my audio gear (namely my Cavalli Liquid Lightning 2 electro-static amplifier) to make room for this beast. Setup was a breeze and after turning it on for the first time, the tubes began to glow after a few seconds. Being a long time tube owner, I knew to give this amplifier a good 15-30 minutes of warm up before I started to really evaluate what I was hearing. Andrew from Wolf Ear Audio was nice enough to supply me with some extra tubes to roll in during my review. Initially I decided to use the Electro-Harmonix 6N8S driver tube. I’ve used various Electro-Harmonix tubes (6SN7, 12AX7) in other tube amps and found the tube a very nice and clean sounding alternative to NOS tubes from years gone by.

I first selected my Sennheiser HD800S headphones. I find these headphones are ruthlessly unforgiving of amplification that isn’t up to par. Well, with that in mind I selected on of my favourite CDs: k d Lang’s “Hymm’s from the 49th Parallel”. I thought it more than appropriate to select a wonderful Canadian recording artist to go a long with this Canadian amplifier. Well, I was immediately struck just how well the Sennheiser HD800S sounded when played with the Wolf Ear Natayo. The dynamics were inspiring! This amplifier certainly kicks like a mule! The HD800S headphones came alive right from the first song (Neil Young’s “After the Gold Rush”) and I was immediately struck on how real and textured k d’s vocals where when played through this amplifier. The ability to extract all the details in the recording and still render it in a manner that did not come off as clinical was incredible! Both the HD800 and HD800S have be critiqued for being on the drier side of things. But my experiences have revealed that is mostly the cause of what you are feeding them due to their incredible level of transparency.

The Natayo really came to life with these headphones and everything from the bass (tight, quick, liquid, but with a very satisfying bloom) to the silky midrange and extremely well articulated treble really drew me into this wonderful album. The treble was very well extended, but being a tube-based amplifier, it had plenty of that old tube magic that didn’t portray it as harsh or overly present. But rather a very natural and easy-to listen experience was put forward. The shimmer on the cymbals was simply outstanding. You could clearly make out the smallest nuances and reverberation. Never did it become excessive, nor did it pull the drummer from behind the band and put them front and center like many poorly designed solid state amplifiers can do at times.. This was an awesome experience listening to one of k d’s greatest albums and with the combination of the Sennheiser HD800S and Wolf Ear Natayo, the music just poured over me and the audio equipment just melted away and it was just me and k d.

After several wonderful albums with the HD800S / Natayo combination, I decided it was time to try this amplifier with a pair of orthodynamic (planar) headphones. The Hifiman HE1000 V2 headphones are a sensational pair of headphones and currently in my personal Top 5 headphones. You can find my reviews of these awesome ear-speakers here: headphone.guru/the-hifiman-he-1000-v2-a-brilliant-update-to-a-classic/. Although the output impedance of 24 ohms, planar magnetic headphones are not affected by damping factor; due to their consistent resistive load, the amplifier’s specific output impedance has little effect on its ability to properly control the drivers. As soon as I selected my DSD recording of Jazz at the Pawnshop 2, I knew I was going to be in for a real audio treat. I often use both Jazz at the Pawnshop and its sequel: Jazz at the Pawnshop 2 to test the ability of a specific unit’s ability to render sound-stage. The HE1000 V2’s have an outstanding ability to portray this and definitely one of the best headphones in this regard. The Natayo was very much up to this task and coupled with these planar magnetic headphones brilliantly. Everything from the background crowd’s murmuring, to the echoes were all very realistically portrayed.

The overall experience was quite holographic and I often thought someone had entered my room and was moving around behind me. Well that must have been either a ghost or the amazing pairing of the HE1000 V2 headphones and the Natayo amplifier! I then re-listened to this album with Audeze’s flagship the LCD-4. These are also an orthodynamic headphone, but come in at 200 ohm impedance and only 97 dB/mW. So getting an amplifier with sufficient power to drive these headphones can be a challenge. Throw in the fact that I was using a very high bit-rate recording, the challenges were there for the Natayo. Well, I was certainly very surprised when I found out that this amplifier had absolutely no difficulty driving these power hungry planar magnetic headphones. It didn’t even break a sweat! Not only did it drive them to incredibly levels from an SPL point of view, the ensuing sound quality was truly excellent and likely the best I’ve heard these headphones sound from a tube based amplifier.

Overall I found the Wolf Ear Natayo OTL amplifier a wonderful experience. From the pure visual aesthetics to the incredibly rich and dynamic audio performance, this is definitely one amplifier I would recommend you consider! I did enjoy it from a wide variety of headphones from high impedance headphones like the Sennheiser HD800S & HD6XX to orthodynamic headphones like the Hifiman HE1000 V2 and Audeze LCD-4. My lower impedance headphones like the Sony MDR-Z1R and Focal Utopia sounded quite good with this amplifier and it was able to maintain a noise floor with these headphones that didn’t impede my experience; although the Natayo really seemed to shine best with high impedance headphones (most likely due to its OTL design). For a relatively newcomer to the world of personal audio, Wolf Ear has really knocked it out of the park with this amplifier and for any tube-fan, I strongly suggest you check this amp out! Even for solid state aficionados, the Natayo may have you rethinking your position on vacuum tube based amplifiers…it is that darn good!