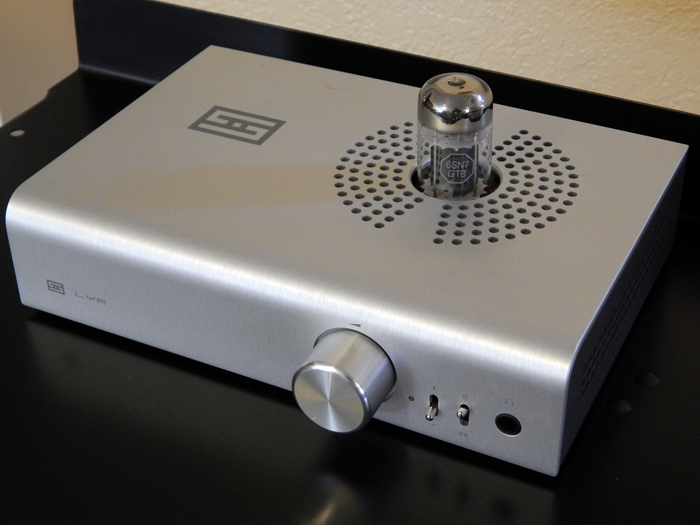 There are a couple of things that are extremely rare in Personal Audio, one is tube based DAC/Headphone Amplifiers. The other is Schiit DAC/Headphone Amplifiers, in fact until now there was only one, the solid-state Schiit Jotunheim Configurable Balanced Desktop Headamp & Preamp. What made the Jotunheim truly unique was its modular design that offered you the option of a Dual AK4490 Sigma Delta DAC module or a Phono Stage module. Enter the Schiit Lyr 3 Tube Hybrid Modular Headphone Amplifier and at the same time, almost to complement the Lyr 3, Schiit released a new Schiit Multibit DAC Module for the Jotunheim and the Lyr 3.

Fans of the Lyr 2 will know that it stood as one of Schiit’s most popular amplifiers, but to improve on that design it was necessary to go back to the drawing board and build a completely new amplifier. Employing their proprietary Coherence™ hybrid topology (a unique current-mode, noninverting tube/ Bipolar Junction Transistor hybrid topology that eliminates the need for interstage coupling capacitors) the Lyr 3 is able to operate using a single 6N8S or 6SN7 tube (a New Old Stock [NOS] 6N8S tube is supplied with the unit), meaning no more expensive tube matching and making tube experimentation much easier and more cost effective. On top of that the Lyr 3 introduces Continuity™ a constant transconductance output stage which provides superior performance, giving the Lyr 3 a low enough noise floor to run sensitive IEMs and enough power to run the most demanding headphone via the single ended output (how much power? 9 Watts into 16 ‎Ω, that’s enough to run a loudspeaker). And of course the thing that really sets it apart from the Lyr 2 is the modular design, which Jason Stoddard says is the first of its kind in the industry, allowing for the choice of input modules.

The Schiit Multibit DAC Module is the most recent iteration of a DAC design that goes back to mid nineteen eighties and Mike Moffat’s original multibit design that eventually launched Theta Digital. It employs the same Schiit Comboburrito Time- and Frequency-domain Optimized DSP filter as their legendary Bifrost Multibit DAC as well as what Mike refers to as Cheap Assed Balanced (CAB a process for producing a balanced DAC using two rather than four DAC chips by handling it in the analog section that Mike says is used in most balanced DACs) providing a fully differential, active summing and filtering analog output which allows the module to work as balanced source for the Jotunheim and Lyr 3.

Sleek is the first word that comes to mind when you look at the Schiit Lyr 3. It has the same minimalistic appearance of all Schiit product, with the power switch on the back and on the front you have the ¼”  jack for the single ended headphone output, a switch to toggle between the module and the analog input, a gain switch (I never need to switch out of low gain), and volume control knob. And of course there is the single tube sticking out of the top (slightly off to the right in line with the volume control). Apart from the power switch and the AC input, on the back you have a set of single ended (RCA) inputs and single ended pre-amp outputs and if you have the DAC module a USB input.

Set up was simple, plug the tube into the ceramic tube socket (much preferable to the plastic used by many much more expensive tube amps), plug in the power cord and USB cable and you are ready to go. For Windows users, Schiit recommends Windows 10 and you can download the CMEDIA drivers from their website, for Linux and Mac users you’re all set. I should note that because they were there, I used a Moon Audio Blue Dragon Power Cord and a Moon Audio Blue Dragon USB cable.

Plugging my MrSpeakers ETHER C Flow Orthodynamic headphones into the Lyr 3, I pulled up the New York Dolls’ “Trash” from CBGB’s and the Birth of U.S. Punk (16/44.1 kHz). Even in low gain mode the dynamic range was epic and the tube musicality made the reproduction of all those vintage tube amps all the more lifelike. The soundstage was stage edge with guitars on either side of you and David Johansen right in your face. The floor toms had real impact with excellent attack and decay.

Looking for something a little more nuanced I was treated to an in studio performance of “Crunch Time” by Levin Torn White (Levin Torn White –  16/44.1 kHz). The Multibit DAC concisely picked out each note from the cacophony of sound, depicting each of the layered instruments in its own space and time. Again the Lyr 3 made full use of its incredible dynamic range, and there was no hint of edge or harshness that the musicians didn’t put there.

Going for a mellower and subtle sound I put on the single version of my perennial favorite “What a Wonderful World” (24/192 kHz), Satchmo’s gravelly baritone set on a stage in a large concert hall with the guitar, bass, strings, drums, vibes and closing horns spread out in the orchestra pit.

Despite using the same technology, the MrSpeakers AEON Flow Open headphones have a completely different though equally enjoyable sound signature from the ETHER C Flows, and they are much more efficient and priced about the same as the Lyr 3 with the Multibit DAC module. The Bass guitar was deep and resonant and had a tangible thump as did the kick drum from “Sargeant Lasard” by Beatnik Beatch (Beatnik Beatch – 24/96 kHz vinyl rip) and the snare had a solid pop to it. The soundstage was mosh pit in a huge dance club. The vocals were clear and personal with significant air. The dynamic range was immense and exciting with a very deep imperceptible noise floor.

The 1MORE Triple Driver Over-Ear headphones offered an almost overwhelming rich subbass listening to Dario Baldan Bembo’s rendition of “Non Mi Lasciare” (16/44.1 kHz), the piano was full and Baldwinesk, and you could hear the beads shimmer on the snare drum. Dario’s operatic vocals were sweet and emotional.

As a completely unfair test, I took up Schiit’s challenge and plugged in my Noble Katana IEMs and was completely blown away. Only one other desktop amplifier I have ever tested was able to drive the Katanas without a significantly high noise floor, the Questyle CMA400i which was built with the idea of driving IEMs. While I could not raise the volume over a quarter the way up, it was dead silent. Sarah Brightman’s  execution of “Think of Me” from the Original London Cast recording of Phantom of the Opera (16/44.1 kHz) transported me to a box seat in a huge auditorium perhaps 30 to 50 feet from the performers. It was honeyed and accurate at the same time, the piano full and natural behind Sarah’s chill inducing voice. When the orchestra chimed in each instrument was precisely placed and easily identifiable.

Unlike many tube headphone amps that exhibit the rolled off high frequencies and bottom end that a seeming majority of electrical engineers think is the “tube” sound, the Schiit Lyr 3 produces a true audiophile sound with extreme linearity in both the low bass extending into the subsonic and the upper registers, while retaining the musicality of midrange to tame the occasionally aggressive precision of the Schiit Multibit DAC. Despite the use of a shared tube for both channels, the stereo separation was competitive with many dual mono amps I have heard, and while the soundstage is a bit shallower than I prefer, it does depend a lot on which headphone you listen to, as listening through the Katanas put me exactly where I wanted to be. As to power and dynamic range, I can’t imagine a headphone that the Lyr 3 couldn’t drive easily and produce clean clear concert level volumes for those who wish to damage their hearing. I did find myself listening to higher volumes than I would normally without any fatigue, and could easily get lost in the music for hours.

To be completely honest, if I were to order a Lyr 3 for myself, it would be with the phone stage module and the Modi Multibit DAC and thereby have a complete system for only $150 more, but not everybody is a vinyl head and I wanted to review the Schiit Multibit DAC Module at the same time as they were introduced together. As a desktop DAC/Headphone Amplifier, the Schiit Lyr 3 with the Schiit Multibit DAC module is one of the best values out there and sees competition from only one other unit out there that I can think of, a definite thumbs up on this one.