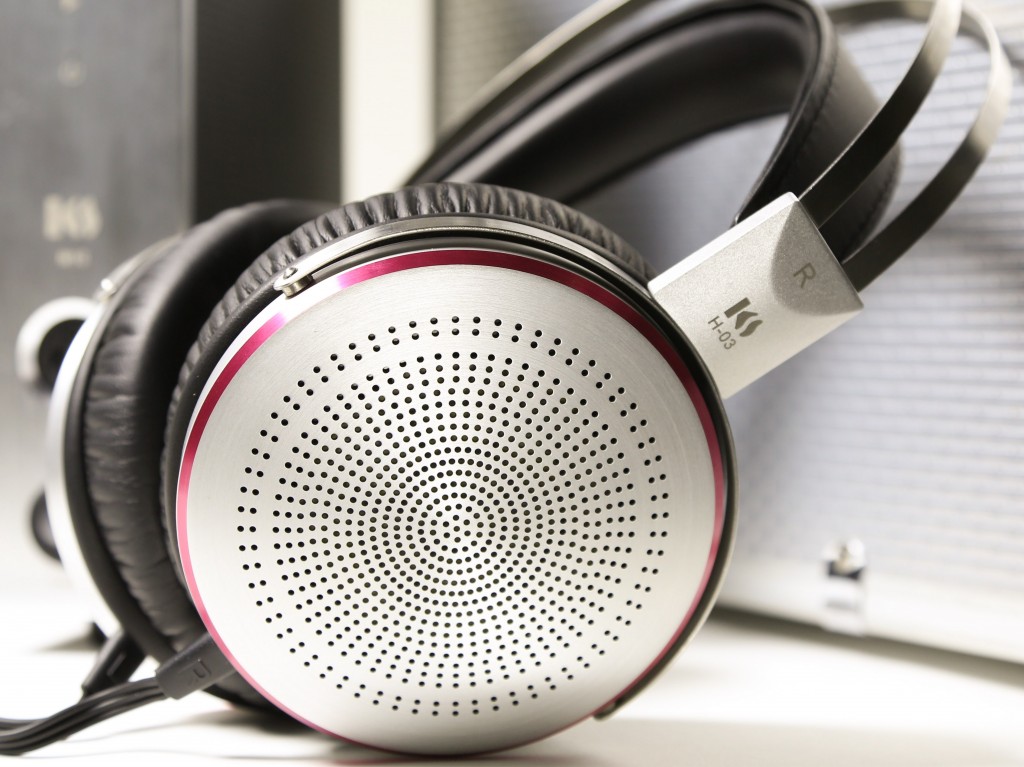 The allure of electrostatic headphones is an ancient one. The overarching mythical promise of ultimate transparency, near infinite dynamic resolution, astounding harmonic integrity, tonal purity, and effortless presence is reason enough to seek this particular manner of Grail, but these sugar-plummy thoughts seem to be mitigated or compromised by more mundane and practical concerns: these are the furthest thing from “portable” in any sense of the word, requiring of high voltage energizers that are not insubstantial, for instance – the best of which always seem to be tube-based, at least in my estimation. The electrostatic membrane elements are exceedingly thin and can be fragile – bang not thy head. High voltage mere millimeters from your noggin. You probably won’t be taking these on the plane with you …

In this rarified space there have been very few players. Stax, of course, as the granddaddy of the sector. Sennheiser’s legendary Orpheus comes to mind. The ever-clunky Jecklin Float is a fun recollection. Koss’ less expensive ESP-950 package remains hovering in the background. For those with the proclivity, caveats are little more than minor annoyances meant to keep the unwashed at bay, comforted with their lumbering moving-coil thumpasaurs. It’s not so much that electrostatic headphones are solely the quarry of superior minds of inimitable taste, but rather that they often seem thought of as far too peculiar and exotic, and by that specialization tend to attract those who seek the peculiar and exotic – despite the caveats.

Into this underpopulated league of high voltage toys wanders KingSound, a Hong Kongian company with a recent history of electrostatic offerings that is positioned, with this latest headphone system, to make an indelible mark on the sector as a serious player.

Thanks to Drew Baird at Moon Audio, I received my review sample with the M-20 tube-powered energizer, replete with a Gold Lion tube upgrade that Drew assured me is a near-obligation for best performance from this combination. Headphones, energizer, and tube upgrade -as a package- retail for $2,500.00 as of this writing.

This is unmistakably a high-resolution headphone experience. The transparency, extraordinarily low distortion, and sensitive dynamic resolution that are thought of as hallmarks of electrostats are evidenced abundantly, with special regard for harmonic richness and tonal integrity. Minimally mic’d “purist” material – such as titles from MA Recordings and Water Lily Acoustics – demonstrate the heights to which this system can fly, revealing as much the character of the space around the musicians and their instruments and voices as it does those things, themselves.

Harmonics can be utterly astonishing, erupting in spectral rainbows around plucked strings and struck cymbals, revealing a colorful depth to instruments that often get lost in the splashy heaving of less nuanced transducers. Here the KingSound was really able to unravel seriously complex harmonic and dynamic tracks such as those found on “Southern Brothers” (Water Lily Acoustics), “Salterio”, and “Mudejar” (both MA Recordings). Further on that thought, horns radiate harmonics and subtle dynamic cues that often get lost or confused when listening to conventional transducers. The KingSound suite seemed to hold nothing back in that regard, especially on the Blue Note LPs from the celebrated Acoustic Sounds and Music Matters Jazz reissues, such as “Bluesnik” (Jackie Mclean), “No Room For Squares” (Hank Mobley), “GO” (Dexter Gordon), and “Page One” (Joe Henderson).

And this leads inevitably to the examination of the midrange through the lower treble, where all of the flavor and juice in the music resides. When it comes to vibraphones, xylophones, and marimbas, the instrument spans a full spectrum of sound from the fairly low in frequency to ultrasonic harmonics with beautiful mids and treble in between. These are percussion instruments, and can be shockingly dynamic. As such, these can be fairly difficult instruments to record and reproduce with realistic resolution. Milt Jackson’s vibes glowed with otherworldly presence from the MoFi reissue of “Invitation”, an Orrin Keepnews/Riverside recording, and one of my favorite records. The KingSound set glided effortlessly through even the most dynamically complex passages, unraveling the musical picture with aplomb. Rich, refulgent, downright juicy and yet with no loss of dynamic snap.

On challenging vocal tracks, such as those found on “Tonos y Tonadas” and “Buenos Aires Madrigal” (MA Recordings), the KingSound seemed to simply disappear, leaving nothing but pure bliss to hang in the air. Another vocal-centric album resplendent with both rich harmonics and midrange magic is “Llama”, also from MA Recordings. The combination of Ravid Goldshmidt’s “hang” (a percussive instrument played with the hands, and sounding a bit like a steel drum) and Silvia Perez Cruz’s heart-wrenching voice sent chills through my spine and gave me goosebumps. The same was true for Ella Fitgerald’s stunning work on her “Fine and Mellow” LP (Pablo), the title track for which can put any audiophile favorite to shame in just the opening stanza. Natalie Merchant’s “Tigerlily”, while sort-of qualifying as one of those audiophile faves, remains a guilty pleasure, and this MoFi reissue is something of a treasure for me. Her voice is at once delicate and yet emotionally powerful, straddling the fence between sweet and savory, and able to reach into your heart with soft hands but a powerful grip. The musicians provide a perfect architecture to showcase Merchant’s unique vocal talents, and the whole album comes together – in this reissue, especially – as beautifully as anyone could hope for.

On highly processed multitrack studio productions (such as those from Robert Rich, Nosaj Thing, Gorrilaz, and Flying Lotus), the results were mixed and interesting. The sense of space, however artificially constructed, was wonderful and immersive. This was most noticeably true for the Robert Rich tracks, which are intended to create an aural surrogate-environment for the listener. The KingSound experience was about as immersive and involving as I’ve ever heard these presentations. Daft Punk / Random Access Memories remained eminently groovy and danceable – it’s such an energetic and positively engaging album! As things get a little more dense and complicated, as with some of the Flying Lotus tracks (for instance), there are moments when the situation seems a bit lost for control – but in comparing with more conventional cans or even the planar-magnetics that I have here – it becomes obvious that this is at least partly an issue that is attached to the material itself and not the headphones.

The opening moments of Audioslave’s “Cochise” is a case in point, as a wall of sound erupts with distorted guitar and driving drums backing up Chris Cornell’s legendary voice – the recording is just not done well enough, clearly a victim of the Loudness War and the kind of dynamic distortion that occurs when compressors are ritually-abused. The same seems true, to a lesser degree, for Pearl Jam’s “Ten” and Red Hot Chili Peppers “Blood sugar Sex Magik” – all seriously rockin’ albums that wind up sounding a bit confused and washed out thanks to producers worried about how loud these records will sound at 100mph in a 1969 Camaro. The KingSound set reveals this dynamic-compression distortion more than my AKG 702, for instance.

This isn’t as much of an issue with the Father John Misty album, “Fear Fun” – which falls more toward a folkadelic feel than a hard rock album. This one grooves with reasonably savvy dynamic resolution, and so the music retains a good portion of that dimensionality that’s otherwise lost to bad studio habits like compressor-abuse. “I’m Writing A Novel” is a groovy romper that seems to sit in the middle ground between rock, folk, and country while lyrically exploring the drug-induced struggling headspace of the hallucinating first-person expositor.

Impact of the hard-rock variety seems to be the Achilles-heel of electrostats across the board, as far as I’ve noticed. The KingSound does an admirable job in this department considering that fact, but if my listening we’re mostly Rock of any seriously badass variety, I’m not sure any electrostat would be entirely satisfying – and this includes high-steppers like the 009 or even Unicorns like the Senny Orpheus. I’ve yet to feel the impulse to air-guitar my way to mass-adoration when playing tracks like “Suck My Kiss” from RHCP or lip-synching my way to Rock Heaven when playing Audioslave’s “Like A Stone” … in my experience, electrostats (no matter the model or vintage) have never really delivered that supreme gronk that tracks like this demand. It’s the difference between being inside the performance versus observing it from an almost parental distance. There’s a manner of emotional detachment that electrostats seem to impart to this kind of music, at least to my ears, which I’ve found strangely ironic given how deeply emotionally engaged they are on just about everything else.

Finally, my favorite track to listen to when evaluating anything – including things I have designed myself – is “La Roca” off the Sera Una Noche album, La Segunda (MA Recordings). I’ve used this track for years, and have the CD, the LP, and the High-Rez DVD ROM. The reason this track is so useful to me is that it is one of the least-compromised recordings that I have that is also dynamic, spectrally-complete from DC to light, as harmonically rich as anything I’ve ever heard, is texturally one of the most complex tracks I know of, and reveals an amazing amount of dimension and space. It is my “go-to” track when I want to get the best possible idea of what something is capable of in the shortest amount of time. To its credit, the KingSound suite unravels this track with effortless mastery, air-dropping me right into the deep end of musical bliss. It becomes a dreamy environment, sending my brain into alpha-wave reverie in short order. It’s almost impossible to pay attention to mundane issues pertaining to “sound” – the KingSound just gets entirely out of the way and let’s the magic and bliss flow through.

At $2,500 for the whole KingSound package, including the Gold Lion tube upgrade, the KingSound KS-H3 and M-20 tube amplifier represent authentic Reference-Caliber performance for what amounts to a very reasonable price when you consider that other headphones will require equally-accomplished amplification to mate with. And while $2,500.00 is not the proverbial “chicken scratch” – you’d be hard-pressed to get here for less. With the mentioned caveats regarding hard rock, the KingSound headphone suite seems to be one of the very few top-notch electrostatic headphone experiences one can have without bleeding out your life-savings or negotiating a HELOC with the banksters.

Many thanks to Drew and the crew at Moon-Audio for lending the KingSound H3 and M-20 set to me for this review. It will be difficult to part with, and it is definitely on my short-list for when the time comes to indulge in my next headphone-related acquisition.

The KingSound H3 and M-20 + Gold Lion tube upgrade belong, in my estimation, on your short-list, as well.

Thanks to Moon Audio for loaning us the equipment for review.

Chris Sommovigo is an audio veteran that has worked in the industry in various capacities since 1992. For his "Darko Disclosure Doctrine" disclosure of financial interests, please visit: CLICK HERE