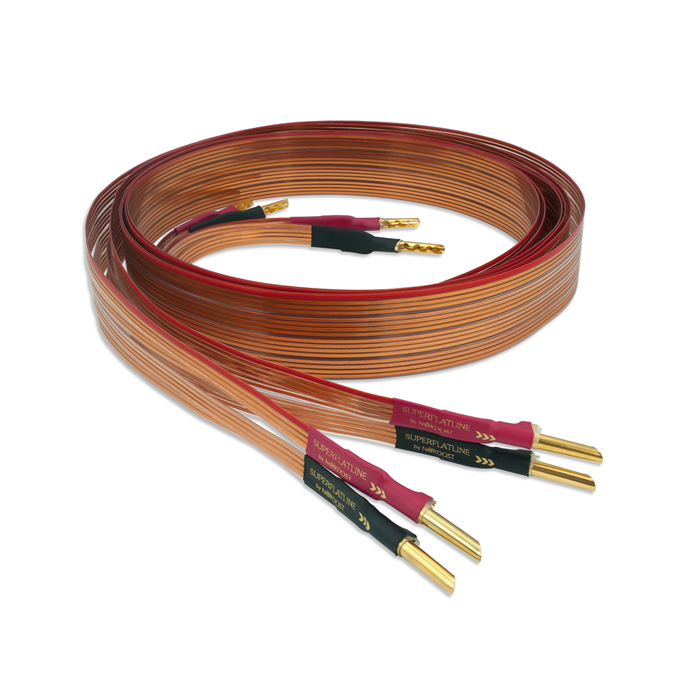 Loudspeaker cable may seem a bit odd of a choice for review in a Personal Audio Magazine, but there are three important factors to consider. First and foremost, most Personal Audio enthusiasts will eventually move on to two-channel or home theater at some time when loudspeaker cable will become a real consideration and a very important factor in their enjoyment of said system. Two, a headphone cable is, in fact, a loudspeaker cable (though tailored to the specific needs of a headphone) and therefore the performance of a company’s Loudspeaker Cable is a good indicator of the performance of their headphone cables. And thirdly Nordost Leifstyle SuperFlatline Loudspeaker Cable while being an audiophile product is also a Lifestyle product which again brings it into the purview of Personal Audio.

Nordost definitely needs no introduction as an audiophile cable manufacturer being one of the leaders of the pack since their introduction in 1991. Nordost Leifstyle (a play off of lifestyle incorporating their Nordic naming convention) is their custom install (IE: lifestyle) line of cable designed to run seamlessly unobtrusive under carpet while providing audiophile quality sound. Nordost Leifstyle SuperFlatline is simply the top of the Leifstyle line offering sixteen 23AWG, 99.9999% OFC, Flat rectangular conductors in a flat Fluorinated Ethylene Propylene (FEP) insulator. Its ribbon cable design offers both extreme bandwidth (and phase coherency) and high current capabilities, which translates into excellent imaging and soundstage, extreme dynamic range, as well as, well controlled and authoritative bass.

Like headphone cables, loudspeaker cable has a series of hoops, often contradictory and mutually exclusive, that it must jump through and it is the designer’s job to decide which compromises to make, and that is the fundamental core of cable design, and why no two cables are alike. Essentially we are looking at: Current Capacity, Bandwidth, Phase Coherency, Phase Linearity (Linear Bandwidth), Capacitance, Impedance and Resistance (Isolation and EMF Rejection are also factors, but not so much due to the higher signal strength). Which is why cable is every bit as important a component as any other in the system outside of the loudspeaker (headphone) itself.

More so than with headphones or home theater, cables can make a major effect on the imaging and soundstage in a two channel system. The goal in two channel is to create the illusion of one sitting in the audience at a performance by reproducing all of the subtle timing and phase differentials of all of the different sounds hitting the microphones to create a complete immersive three dimensional soundstage with height, width and depth (optimally, in a proper set up, you should also get the sounds from behind you also).

For my listening tests, I chose a pair of Hologram Phantom 5.0 speakers with my main two-channel amplifier (100 Watts, High Bias Class A, the manufacturer’s name has been withheld by request as it is an unreleased prototype) and the Questyle QP2R as source. For comparison, I used generic speaker cables of matched length. I considered doing a near field set up, which removes the room from the equation but rejected it in favor of having a fully immersive sound stage which requires rear wall reflection.

I began with “Can-Utility and the Coastliners” by Genesis (Foxtrot – 16/44.1 kHz) and immediately noticed that the soundstage was much more focused and at the same time larger and more enveloping, a clear sign of excellent Phase Coherency and a wide bandwidth. Peter Gabriel’s voice was solidly placed at the center describing a human-sized head about twenty feet from the listener, while the percussion was placed just behind, each drum, cymbal, and triangle in its proper place, while the keyboards projected a wall of sound encompassing the rest of the performers. The subsonic bass was more robust and more controlled offering low-frequency detail that is often lost due to insufficient damping, a product of significant Current Capacity. Also, an effect of high Current Capacity was a slightly improved dynamic range adding a level of intensity to the performance.

Next, I cued up Robert Shaw and the Atlanta Symphony Orchestra performing Stravinsky’s “The Firebird Suite” (Stravinsky: The Firebird; Borodin: Music from Prince Igor – 16/44.1 kHz). Again the soundstage was larger and the imaging more precise, placing each instrument in a believable orchestra arrayed before you in a huge concert hall with plenty of air around you and around each instrument. The tonal balance was exemplary with a hint of increased clarity throughout, not brighter, but as if a subtle distortion had been removed. The impact of the tympanis was palpable and resonant during the energetic crescendos making the experience feel all a bit more real.

That sense of enhanced musicality was duplicated while playing Dario Baldan Bembo’s rendition of “Non Mi Lasciare” (16/44.1 kHz), the piano rich and full, while Dario’s operatic tenor was bone chilling and seductive. Another track with deep subsonic passages, it was likewise improved by the SuperFlatline’s generous current flow and etched bass control.

The lush horns of Herb Alpert and the Tijuana Brass were dynamic and detailed without harshness or being overly brassy for Burt Bacharach’s “Casino Royale Theme” (Casino Royale – 24/192 kHz). The piano came through clear and natural sounding, as did the upright bass. The percussion was impactful with the occasional trill of the vibes adding contrast to the piano. Again the soundstage was large hall, with the band focused about 20 feet away from the listener.

To further wallow in the full-bodied bass provided by the Leifstyle SuperFlatline I brought up Marvin Gaye’s “I Heard It Through The Grapevine”. The dulcet tones of the Rhodes piano counterpointed by the backing strings, the drums solidly off to the left with the bass guitar on the right, as if Marvin was in the room there with me.

While my session went on for some time, my observations were consistent: A sharp focused image, a large enveloping soundstage, deep resonant bass and sub-bass with acute definition and control, and exceptional and exceedingly musical clarity.

I went into this review knowing how critical speaker cable can be to two-channel sound, and I know enough about cable design to expect the Nordost Leifstyle SuperFlatline to be able to deliver on its claims, which it did in spades, so even though there weren’t any great surprises, that’s not necessarily a bad thing. More often than not, high-end cables add something to the sound, and that is contrary to the purpose of cable. Ideally, a cable should deliver the signal to the speaker exactly as if the speaker were attached directly to the outputs of the amplifier. My generic cable added a slight harsh blariness to the sound that the Nordost Leifstyle SuperFlatline removed increasing both the clarity and the musicality of the overall presentation.

A couple of notes on Nordost Leifstyle SuperFlatline speaker cable: It is available in either spade connection or banana connection, though they recommend the bananas as offering a better connection, it is certainly easier for set up. It is also available in Bi-Wire or Bi-Amp configurations, though they have their own take on this also. And they are available in a wide range of lengths making them appropriate to almost any installation.

While I focused on their performance in a two-channel system, it should be noted that the characteristics of Nordost Leifstyle SuperFlatline cable will also greatly enhance the performance of a multi-channel system, offering improved dynamic range, clarity, and low-frequency rumble and impact.