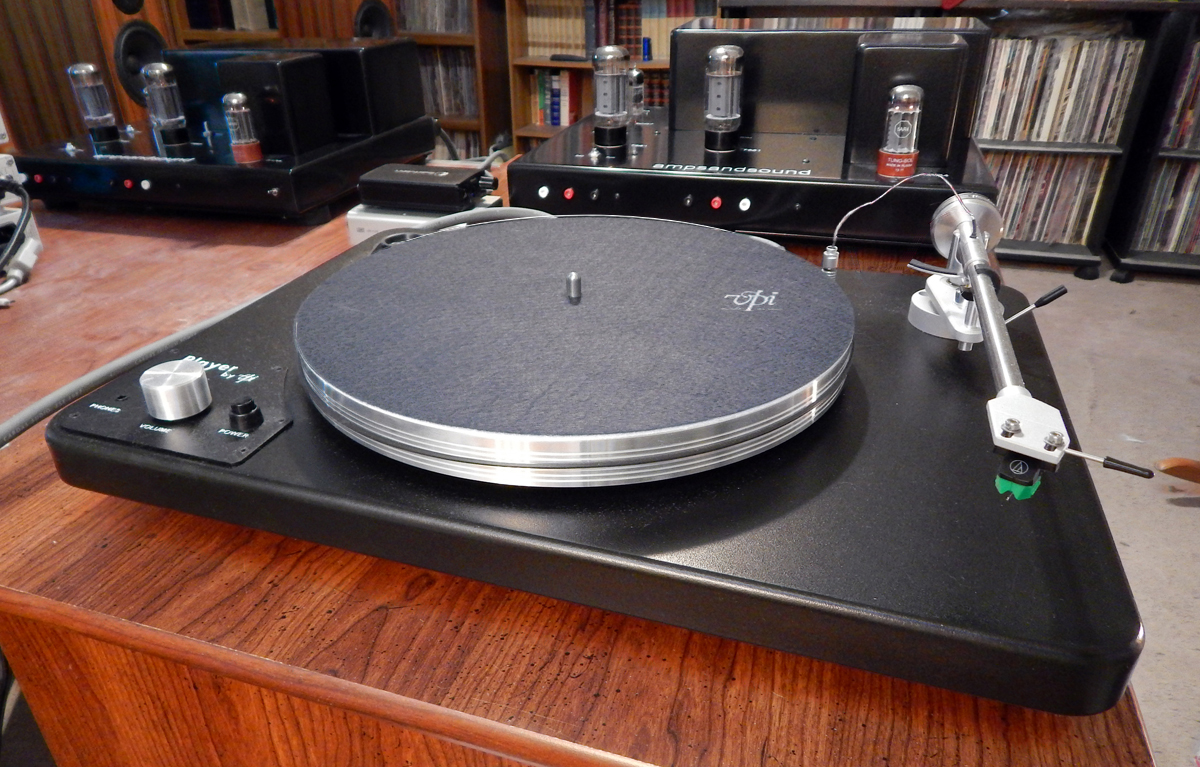 A couple of years ago I had the great pleasure of reviewing the VPI Player, to read said review simply follow this link. As a long time lover of analog, I have endeavored to include a turntable in my system reviews for our sister magazine HiFiAudio.Guru, though admittedly said endeavor has not always met with success, in fact, my upcoming review of the ampsandsound Zion amplifiers with Fritz Speakers Carrera BE Loudspeakers and Cardas Iridium Cables was my first actual analog review for the magazine and the turntable of choice for that system was the VPI Player with its built-in Phonostage, as the initial intent was to have a fully analog system and since no preamp was included in the original setup I planned to use the Headphone Amplifier for volume control.

This opened up a golden opportunity to revisit the VPI Player and do a follow-up review for Headphone.Guru to determine if it has stood up to the test of time, and as luck would have it the VPI Player of today appears to be much improved over the one of two years ago.

VPI is one of those companies that I have had a love affair with since the late ‘80s. What’s astounding is, in this day of $150,000 turntables, the VPI Player, a fully self-contained audio system, sells for about half of what the entry-level VPI turntable only (and by turntable only, I mean sans tonearm) of those early days did and yet still provides amazing performance.

The extensive list of features for the VPI Player is as follows:

The turntable I received had a handsome black plinth which matched really well with the amplifiers as they were also black. It came packed completely assembled and set up, though it did include assembly instructions which might indicate a change in packaging or simply accommodation for show models, but don’t be surprised if yours does not come assembled, which is only a simple matter of placing the platter and putting on the belt (I seem to remember this being the case for my previous review). Recommendation was to run for 20 hours for break-in, I did 24 hours 33 ½ RPM and about 10 hours 45 RPM. Overall speed control and wow and flutter were better than the previous unit, but the real improvement in my book was switching to the Audio-Technica AT-VM95E cartridge which has a much more linear tonal balance than the Ortofon (which was well-substantiated in the listening tests).

Living with the VPI Player:

As implied above my initial review sessions took place using the VPI Player as source for a two-channel Loudspeaker System. I used Robert Shaw and Atlanta Symphony Orchestra’s performance of “The Firebird Suite” (“Stravinsky: The Firebird; Borodin: Music from Prince Igor”) to perform the final adjustments in the system set up since I had it both on vinyl and CD. This test also let me verify what I had already suspected, that the Audio-Technica AT-VM95E was much more linear than its predecessor. While the Elliptical stylus brought out the vinyl noise a little more than the Line Contact (Shibata) stylus on my personal turntable (mind you my regular cartridge costs almost as much as the whole Player Turntable), the tonal balance was indistinguishable from the digital recording on A/B tests (though the vinyl will be higher resolution and more musical, the tonal balance of the digital copy should be unchanged from the master).

The sound of the system was epic. The timbre and tonal balance of the system was phenomenal, from the opening rumble of the double bass celli, contrabassoons, and tubas to the delicate woodwinds and strings to the crystal triangle. The interplay of the oboe, flute, English horn, and clarinets was easily perceptible with each instrument fixed in space and the impact of the bass drum and timpani was palpable.

The extra measure of musicality of the Zion Monos with the VPI Player as source took the edge off of the beryllium tweeter of the Fritz Speakers creating a lush three-dimensional soundstage with both width and depth.

For my Personal Audio session, I began with the Dan Clark Audio ETHER2 Orthodynamic Headphones (acquired when they were named MrSpeakers) as they were my highest resolution reference headphones and one of the more fun to listen to. One of the wonderful things about analog is that it gives me access to recordings I haven’t listened to in years since they are not available digitally. One such example is David Van Tieghem’s cover of “in-da-gadda-da-vida”. David Van Tieghem is one of the most talented and eclectic percussionists to stalk the performance art world and this recording is a shining example of his prowess, while at the same time revealing of the advantages of analog and laudable performance of the VPI Player. There are two versions of the song on this 33 1/3 RPM EP, the “Day-Glo Mix” and the “Black Light Mix” and the compelling sound forced me to listen to both. The soundstage was vast and detailed, and the glut of instrumental overlays was portrayed honestly and without blur or harshness, with a musicality that can only be achieved with vinyl.

Before moving on to my main reference headphone the MrSpeakers ETHER C Flow Planar Magnetic Headphones, I decided to take a run at my hardest to drive (maybe the hardest to drive period) headphone the HiFiMan HE6se Planar Magnetic Headphones. While I would not recommend using these headphones with the VPI Player without a hefty tube amp to back it up, the Player did not shy away from them either. Even at max volume, I was not able to perceive any clipping when listening to side one of “Focus III” the third eponymous album of the epic progressive rock band Focus. While not ear-bleedingly loud the Player was still able to capture the subtleties and dynamics of the recording, and offer a pleasurable experience.

Choosing as an orchestral piece to listen to with the ETHER C Flows, Mahavishnu Orchestra’s “Apocalypse” backed by Michael Tilson Thomas and the London Symphony Orchestra, I was overwhelmed with the dynamics of the progressive jazz band enhanced by the full weight of an orchestra. The soundstage was huge, with each instrument in its place and extreme depth with the orchestra behind and the electronic instruments up front. The tonal balance and timbre of instruments were spot on, making it easy to separate Jean-Luc Ponty’s electric violin from the string section, even during crescendos of horn, woodwind, and string. The percussion was fast with strong attack, and the piano and bass were full and rich.

As a last soundcheck, I selected my dynamic reference headphones the Spirit Torino Twin Pulse Isobaric Open Circumaural Headphone and a Philip Glass piece called “North Star” which turned out to be a perfect match as it lent an ethereal air to the performance. During the choral sections, the voices floated around you like a halo and you could visualize the individual pipes during the organ solo.

Conclusions on the VPI Player:

So what is the upshoot after two years, well the VPI Player is still a great value and still a fantastic entry-level turntable system, whether you are using it for headphones or as a source for a loudspeaker system. Overall the sound quality is much improved over my first experience, again both as a basic turntable and as a headphone amplifier. While harder to drive headphones will still long for the power of one of your better stand-alone amplifiers, most headphones will perform excellent with it. The tonal balance and soundstage are way above the weight class of the VPI Player putting to shame many phono stages that cost as much as the table itself.

Vinyl is much more demanding than digital, requiring ritual and patience and a certain amount of suspension of belief. A great deal of effort is involved in selecting the record, cleaning the record, destatictizing the record, and you have to commit to 30 minutes of music from a single artist, not just the hits (which is why I talk of albums rather than individual tracks much of the time). It also demands more attention, it demands you immerse yourself in the music, and you have to learn to block out the vinyl noise and the occasional and sometimes not so occasional pops and clicks that go hand in hand with a volatile physical media that reacts poorly to encroachment into its environment, so it is no little thing when I say that the VPI Player makes that well worth it.