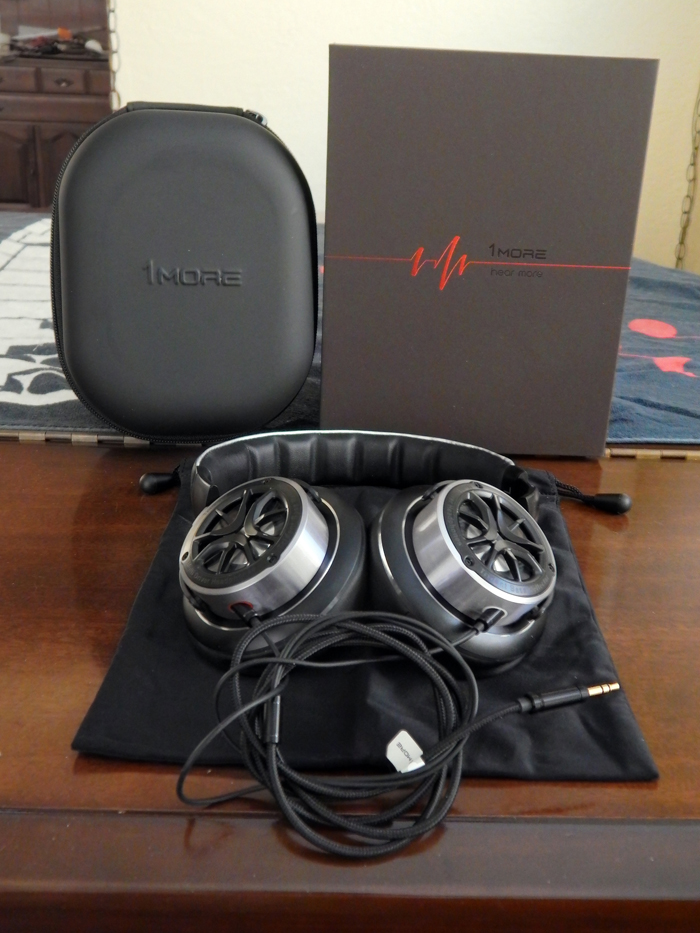 It was like Christmas, answering the door to receive a box which I didn’t know what was inside. Anyone who knows me, knows the 1MORE Dual Driver IEMs are my favorite budget IEM, and believe me, I have a lot of excellent inexpensive IEMs to choose from, but none of them quite have that perfect balance of neutral tonal balance, low bass extension, and forgiving musicality that the 1MORE Dual Drivers deliver. So it is no surprise that when 1MORE offered to send me something new to review I said sure, without actually knowing what they were sending.

Enter the 1MORE Triple Driver Over-Ear Headphone. The three drivers consist of a 40mm grapheme dynamic driver, a ceramic tweeter and a bass reflector (which appears to be more of a passive component rather than an active driver, but who am I to quibble), which are tuned by Grammy® winning sound engineer Luca Bignardi. As one comes to expect from 1MORE, the build quality is exceptional, coupling Aluminum Alloy ear cups with a leather wrapped stainless steel headband and leather ear pads. The ear cups both pivot and fold to allow them to fit into the provided compact hard shell zipper case. The 3.5mm single ended detachable cable employs oxygen free copper wire with a Kevlar core and a braided cloth outer sheath and uses color coded conventional 2.5mm three conductor connectors, making the sourcing of an aftermarket balanced cable fairly easy.

As with all 1MORE products, the packaging is elegant and upscale, denoting a product of significantly higher cost. The brown and tan magnetic clasp box with da Vinci style draftsman line art on the inside is incased in an outer retail display picture sleeve. Inside you will find the hard shell zipper case containing the headphones nested in a form factored insert, as well as the headphone cable and a gold plated 3.5mm to ¼” single ended adaptor. In a separate inner box you will find the manual, warranty and a cloth carrying bag.

Oddly enough, after my usual hundred hour burn in using the FiiO X7 Mark II, the first thing I listened to was a YouTube video of Amanda Palmer performing her song “Judy Blume” through my reference desktop rig the Questyle Audio CAS192D Current Mode DAC and CMA800R Current Mode Headphone Amplifier. The first thing I noted was the incredible dynamic range and efficiency. I was not even able to turn it up to a quarter volume. The piano was rich and full, with almost real world dynamics. It was like sitting in the room with her, her voice oozing with emotion.

I must point out that the opening in the ear pad is only 2” circular, so they are more on ear than over ear, but the seal was good due to the suppleness of the leather and the comfort level was reasonable.

Since 1MORE IEMs are known for their epic bass response, I pulled up “Can-Utility and the Coastliners” (Foxtrot – Genesis – 16/44.1 kHz) to see how the bass reflector would treat sub-bass, and was not disappointed. The sub-bass was deep, resonant and pervasive. Peter’s vocals were close, intimate and natural sounding, while the overall soundstage and presentation were large and omnipresent. Again, the dynamic range was excellent and the Triple Drivers had no problems separating out the myriad of musical lead lines competing for your attention.

Gerard Butler’s performance of “Music of the Night” (The Phantom of the Opera (Original Motion Picture Soundtrack)) may not be the best rendition of the piece, but it is available in DSD which means a better recording for evaluating speaker or as in this case headphone performance. There was a real sense of a live theater experience. While the different orchestra sections were portrayed as more of a whole rather than as individual instruments, the imaging was good and the solo players had realistic tone. The plucked cello and bass had real meat and tactility. There was a real front row aspect to the vocals with a definite feel of hall.

In pursuit of the live music theme I cued up Al DiMeola, Paco DeLucia & John McLaughlin’s Friday Night in San Francisco (DSD) cut “Fantasia Suite”. Taking advantage of the on-ear aspect of the 1MOREs, I slid them slightly forward placing me about 30 feet from the performers, creating a solid image of the three musicians playing acoustic guitar side by side. Though the three guitars are essentially identical tonally there was no problem differentiating between, each placed firmly on his stool three abreast. Again the sense of hall was large. And when the audience responded to the musicians antics, you were immersed among them.

Switching to the Questyle Audio QP2R, I had no trouble driving the Triple Drivers in the “Low Gain” setting. Listening to Audioslave’s “I’ll Wait for You There” (The Civilian Project – 16/44.1 kHz) the bass and guitars were deep and rich, while the drums had snap and impact. The soundstage was more small club than stark studio. The vocals were commanding and occasionally intimate.

Impressively the Triple Drivers reproduced the vintage recording of Bing Crosby singing “Too-Ra-Loo-Ra-Loo-Ral” (Swinging on a Star – 16/44.1 kHz) with richness and authority, with no hint of tinnyness. Bing’s voice was forward and close, while the orchestra was set in the background, the horns and strings full and thick, punctuated by the harp and xylophone, and the flutes reedy and breathy.

Chumbawamba’s “Tubthumping” (Tubthumper – 16/44.1 kHz) covers a lot of musical generes from Rap to Celtic Choral. The core bass line reflected several layers with active build up and decay of each note with a percussion like impact, yet did not draw away from the sweetness of the background choral or cover the guitar and other backing instruments in the quieter and more aggressive passages.

Of course no review of a 1MORE product would be complete without a stint with the cell phone to gauge forgivingness and versatility. For a real test I brought up the SoundCloud app on my Samsung Galaxy J3 and selected my own cover of “Spoonful”, a recording which I am obviously intimately familiar with. The bass was deep and resonant, the guitar crisp and clear and the vocals like they came right out of the studio monitors, overall a pleasant and musical reproduction.

So true for the Who’s “Can’t Explain” (24/48 kHz) which again had that small club atmosphere, dynamic, powerful and sonorous.