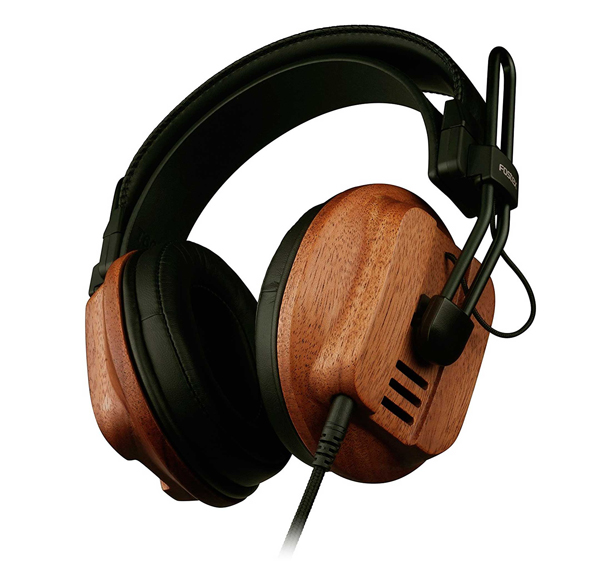 Fostex has been building their Regular Phase (RP) technology diaphragm planar magnetic headphones since the 70s, and the fact that so many aftermarket custom headphone companies use them says a little something about their performance. Their latest offering the T60RP represents the pinnacle of the design and one of the greatest values in the headphone market.

Fostex’s proprietary RP diaphragm, made of polyimide film with copper foil etching employing neodymium magnets is designed to provide excellent transient response and handle up to 3 Watts of power, ensuring plenty of dynamic range. Some of the improvements include African Mahogany ear cup housings for a warmer richer sound, a leather secondary headband strap and around-the-ear pads for added comfort, and a four conductor 3.5mm connector to allow for use of an optional balanced connection cable (it came supplied with a single ended cable).

As one would expect from a headphone in this price range, they came in a simple but elegant black box and included a basic black cloth carrying bag.

The T60RP’s construction will be familiar to those who have experienced previous models of the RP series consisting of a padded spring steel crossbar, with sturdy dual bar sliders attached to pivots at the center of the ear cup housings, all in all expressing their studio origins as a headphone that is well constructed and up to the rigors and abuse of studio usage, while the wood housings give them an attractive vintage look. They are also fitted with tapered ear pads to create a more forward image and soundstage.

Since I used the FiiO X7 Mark II to burn in the T60RP, I began my listening tests with that as source. Selecting Peter Frampton’s “Do You Feel We Do” (Frampton Comes Alive – 24/96 kHz), I found that I could achieve acceptable volumes in the high gain mode. The tonal balance was neutral with a front row next to the monitors feel. The instruments were on an even plane with the vocals slightly behind. The soundstage was shallow but wide with an on stage aspect to it.

So too with Stanley Jordan (“Eleanor Rigby” – Magic Touch – 16/44.1 kHz), it was as if you were Stanley himself in a large bright hall, a sense of space but not of distance.

Switching to my reference DAP the Questyle QP2R, I kind of wished that they had sent along the balanced cable as the T60RP definitely benefited from the increased current and greater musicality. Listening to “Can-Utility and the Coastliners” (Genesis – Foxtrot – 16/44.1 kHz) the sub bass was lush and resonant, if not overly deep, while the guitars and cymbals were crisp but not sibilant, the speed of the Orthodynamic drivers capturing the shimmer of the cymbals. Gabriel’s voice was intimate with a slight layer of damask giving it an otherworldly air. Again the soundstage was expansive but flat.

Nicky Hopkin’s piano on Harry Nilsson’s “The Lottery Song” (Son of Schmilsson – 16/44.1 kHz) had an upright sprightliness. The complex layers of the plethora of instruments (three acoustic guitars, one electric guitar and two percussionists on top of the piano and Harry’s multiple layers of vocals) were clearly defined putting you in the center whirlpool of sound as seen from the drummer’s perspective, creating the illusion of a circle of friends playing together capturing the cozy mood of the piece.

For a peek into female vocals I selected The Blue Man Group’s cover of “Baba O’Reilly” (The Complex Rock Tour Live – 16/44.1 kHz) with Tracy Bonham singing and providing epic violin. While not what you would call honeyed, Tracy’s voice was rendered with full emotion despite being engulfed in the sound of eight percussionists, two guitars and a keyboard player. The soundstage was immense and full immersion, with a very live tactility.

Scaling up I connected to my reference desktop system the Questyle CAS192D/CMA800R Current Mode  DAC and Headphone Amplifier. The Reference Recordings Eiji Oue and the Minnesota Orchestra’s performance of “The Firebird Suite” (Stravinsky – DSD) appeared to be called for at this point. The tympanis came across rich and resonant, the clarinet woody and the oboe reedy. On the other hand the strings and flutes were a bit thin but not aggressively so. The French horn full and rich while the rest of the brass was a tad tenory. Though the kettle drums were a wee indistinct the overall effect was of distance rather than distortion. The T60RP well enjoyed the higher resolution and greater power of the desk top rig. Unlike the rock recordings played previously, the watchword for the soundstage was distance, perhaps farther from the stage than I would normally prefer, but with a great deal of width. Excellent dynamics were exhibited especially for planar magnetic headphones. There were definite overtones of hall as opposed to amphitheater and instrument placement was laser sharp.

In memory of Tom Petty I put on “Breakdown” (Tom Petty and the Heartbreakers – 16/44.1 kHz) for a real in studio experience. The blending of the bass guitar and the Rhodes piano were delineated as the separate instruments they truly are creating a pulsating background for haunting vocals and ripping guitar licks. The skipping syncopation of the snare, kick drum and high hat succinct yet musical, with no spitting.

In anticipation of things to come and because it was there, I kicked in the Schiit Yggdrasil Analog 2 Bit Perfect Multibit DAC for a quick session. Cuing up “Out of the Blue” (Roxy Music – Country Life – 24/192 kHz) the cacophony of instruments were clearly painted on a black background, completely engaging yet allowing Bryan Ferry’s lush baritone crooning to shine through. Andy Makay’s oboe, Phil Manzanera’s lead guitar and Eddie Jobson’s violin float ethereally atop an underpinning of piano, rhythm guitar, bass and drums expertly provided by Eddie, Phil, John Gustafson and Paul Thompson producing an extremely complex and hard to reproduce tapestry of sound which the T60RP commendably rendered.

For a change of pace I put on “Of a Broken Heart” from Billy Corgan’s Zwan album Mary Star of the Sea (16/44.1 kHz). There was a great sense of space and propinquity at the same time, as if you were sitting with the band on the moon.

As a last test I connected to my Samsung Galaxy J3 smartphone and activated Slacker Radio. Listening to “Bye Bye Love” by the Cars required full volume, but it was totally listenable despite no soundstage to speak of. I got a little more space with The Band’s “The Weight”. In both cases the bass had a definite presence and the overall tonal balance was good. It was neither fatiguing nor harsh making it a rather excellent result from such a low resolution source.

In conclusion, the T60RP is everything you would expect from a Pro Audio company like Fostex. Those familiar with the previous generations of the RP series or any of the many aftermarket headphones that use the RP driver will not be disappointed. Though not a forgiving headphone, it does not amplify the negative aspects of a low resolution or harder amplifier despite giving a little emphasis to the high end. The midrange is very flat, with a tonal balance that gives a little meat to the bass without sounding particularly colored. The comfort level is fairly high, and the build quality unimpeachable. While there are certainly some advantages to dynamic driver headphones in terms of efficiency and ease to drive, there is no competing with planar magnetics when it comes to speed, detail and linearity, and I would heartily recommend anyone considering a headphone in this price range to give the T60RP a listen.