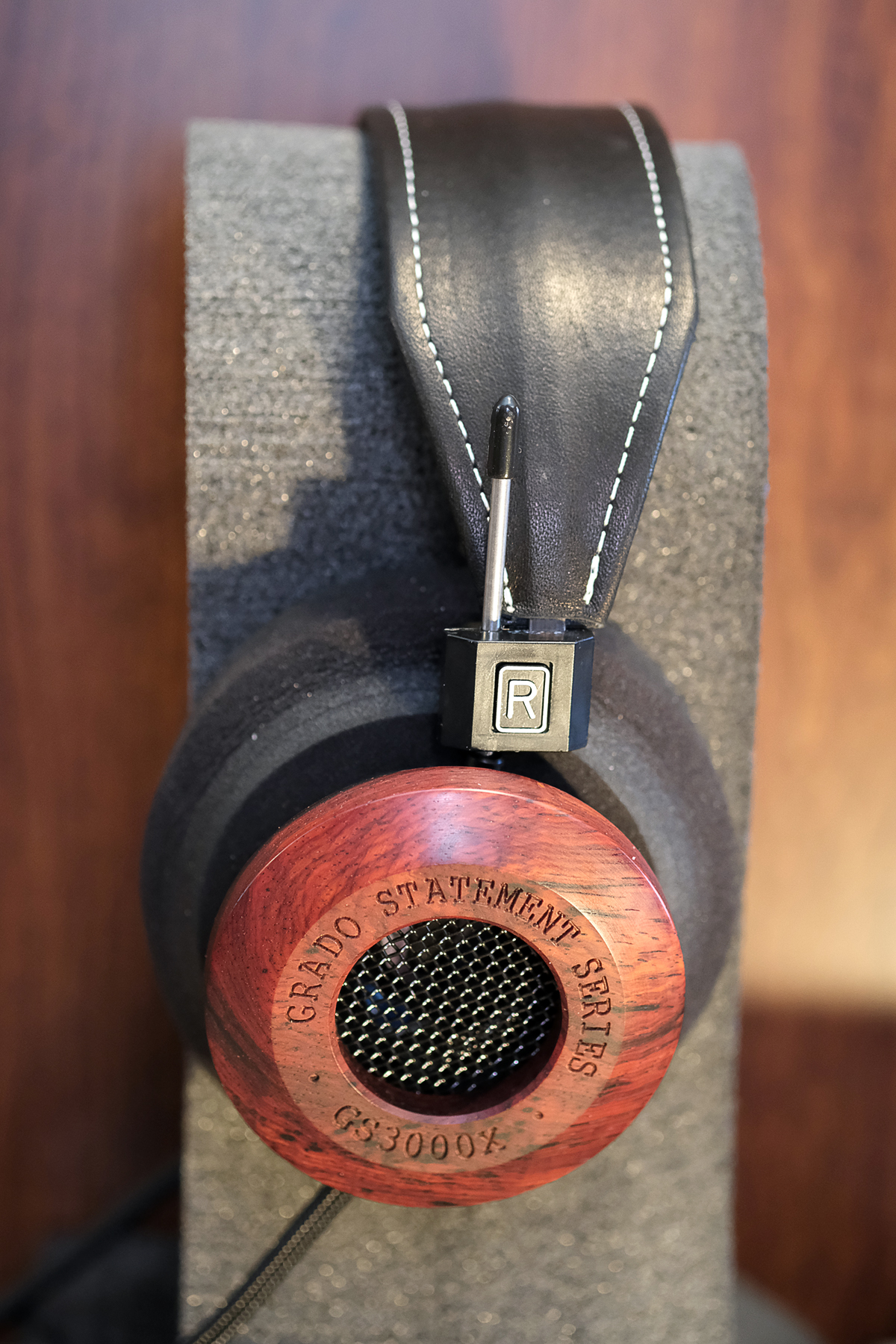 The demand for the Grado GS3000x is so high that they did not have one in stock to send me so I had to wait until one was available. To quote Grado “Founded on a kitchen table in 1953, and working with wood for over a quarter century, Grado Labs has been perfecting the art of sonic reproduction every day since. This GS3000x has traveled from workbench to workbench until ready for your ears. Every experience since that kitchen table has led to the creation of the GS3000x.” which says more about the company than anything I can think of. These are people dedicated to their craft, and fine crafted describe their products to a T.

Part of their Statement series, the Grado GSX3000x definitely makes a statement with its finely handcrafted cocobolo earcups carefully matched for finish and sound. The cocobolo was paired with a metal chamber to add mass to control their largest driver to date. Not to mention the beauty of the cocobolo which makes each set of headphones unique due to its striking pattern. Grado’s new 52mm X Driver, specifically tuned to embrace the tenacity of cocobolo and precision of metal, features a more powerful magnetic circuit, a voice coil with decreased effective mass, and a reconfigured diaphragm all of which improves efficiency, reduces distortion, and preserves the harmonic integrity of the music.

Along with the new speakers, the cables and headband have also been redesigned for the GS3000x. Housed in a more durable exterior is a super annealed copper 12-conductor cable which is hard-wired for sonic integrity, and the new black leather headband features a white-stitched accent with Grado’s signature metal gimbals, and their large “G” foam cushions.

Living with the Grado GS3000x Headphone:

Despite the touted density and mass of the cocobolo and metal earcups as well as the larger drivers, the GS3000x sits lightly and comfortably on your head. While the new cable is a bit stiff, it is not cumbersome as I have noticed many high-end after-market cables can be.

For testing, I decided to use a variety of sources beginning with my reference system; an LSA VT-70 Tube Integrated Amp with Gold Lion KT88s, Audio-gd R2R-1 DAC, Black Dragon Cables, and Core Power Technologies A/V Equi=Core 1000, as well as my Questyle CMA 800R for a solid-state reference, and the iBasso DX320 DAP for portable source.

Putting on Louis Lortie and Hélène Mercier’s “Debussy: Piano Duets” (24-bit/96kHz – Qobuz) the first thing I noticed was that the GS3000x has IEM levels of efficiency eliciting the baseline tube noise from my normally dead silent LSA VT-70, that being said the sound was epic, the two pianos musical and dynamic in a vast soundstage, rich and reverberant, simply magical.

Switching to the CMA 800R I selected “The Getaway” by The Afghan Whigs (“How Do You Burn” – 24-bit/48kHz – Qobuz) and was immediately caught by surprise by the difference in volume between the classical track and the rock track, further emphasizing the amazing efficiency and dynamic range of the GS3000x. Once again the soundstage was gigantic though clearly some of that was enhanced by delay added into the recording other tracks also served up buckets of air. The tonal balance felt neutral with a bit of warmth in the midrange.

This was further reinforced by Joshua Redman performing “Long Gone” from his album of the same title (24-bit/96kHz – Qobuz), the timbre of the instruments appearing natural with a hint of mellow. The piano was fast and rich. The upright bass was presented realistically with the full body of an acoustical instrument without sounding amplified. The percussion was quick with a bit of pop, though again the sound in general had a musical mellowness to it.

“Can-utility And The Coastliners” (Genesis – “Foxtrot” – DSD) painted Peter Gabriel up close and personal among a spacious array of instruments in a large hall. The bass was tight, deep, and powerful without any extra emphasis. The cymbals had shimmer rather than splash giving a much more realistic presentation, and like all the other tracks, musicality reigned supreme.

One track that has been exceedingly demanding of equipment, especially headphones is “Out Of The Blue” by Roxy Music (“Country Life” – DSD), between Phil Manzanera’s jangly guitar, Eddie Jobson’s piano, strings, and synths, and Andy MacKay’s oboe and saxophone the sound can become jumbled sucking all of the dynamics and enjoyment out of what is one of my favorite songs by my favorite singer. Not so with the GS3000x, every note, every instrument, every nuance is drawn out and given a point of origin in space, clarity without harshness.

Imagine being in the front row in a massive arena for the Blue Man Group’s performance of “Baba O’Riley” (“The Complex Rock Tour Live” – 16-bit/44.1kHz), with the combined power of 5 drummers backed by a full band and Tracy Bonham on violin and vocals, exactly how you would want it to be, loud but undistorted, and above all musical, that is what I heard.

Listening to “La Bohème: Act 1 – “Che gelida manina”” as sung by Luciano Pavarotti (“Pavarotti 24 Greatest (HD Tracks)” – 24-bit/96kHz) the three-dimensionality of the image was astounding, you could hear the orchestra in the pit before the stage with Pavarotti behind about 40 feet away me. Air enveloped each instrument making it easy to locate in space. The power and dynamics of Pavarotti’s voice in a huge theater put him just at the threshold of my tolerance for volume.

Switching to the iBasso DAP I selected “Big Yellow Taxi” by Joni Mitchell from “Ladies Of The Canyon” (24-bit/192kHz), during the opening guitar licks you can hear the room sans the delay added to her vocal. It added a personal feel to the recording making it feel like I was in the room with her. Even in low gain full dynamics were achieved at about three-quarters volume. As to musicality, there was no lack, in fact, it rivaled my desktop experience.

As a final test I connected to my Moto G Power smartphone and cued up “The Song Is Over” (“Who’s Next” – The Who – 24-bit/96kHz) on Qobuz, not only was I presented with a musical execution in a large soundstage, but the bass was strong and tight with noticeable impact from the percussion.

Conclusions on the Grado GS3000x Headphone:

For decades, I considered Grado to be the only audiophile-quality dynamic headphone and the GS3000x certainly justifies that belief. Even now that the market has expanded exponentially over the last few years, I feel the GS3000x to be one of the few dynamic headphones that can stand toe to toe with planar headphones. Sounding fantastic and musical regardless of the amplification or file resolution the Grado GS3000x Headphone is what I would call a forgiving headphone, though not in the sense that it might feel colored or hazy, the detail was definitely there and scaled up with higher resolution sources and amplification. While the detail and musicality were at their best with the LSA tube amp, the tube noise brought out by the GS3000x’s extreme efficiency made that a no-starter, so that is a word to the wise, if you are considering purchasing a tube amp to use with them. That being said, I think anyone would be perfectly satisfied with the sound pairing the GS3000x with a solid-state amplifier, in fact, I think they would be a perfect match for the dCS Lina System and feel fully justified in the expense.

Light and easy to drive the GS3000x makes for a perfect headphone for on-the-go as well as home use, with the caveat that like all open-air headphones they offer no isolation whatsoever from the outside world. And the GS3000x feels just as comfortable with hard-core rock music as orchestral classical, or small intimate quartets. I found no music that did not perform well with GS3000x and for those who wish their sound to be colored their efficiency makes equalization a possibility without melting down your amplifier.

To sum up, the Grado GS3000x is the perfect reference dynamic headphone that is both affordable and versatile whether for use in your library or on the road. Full recommendation.